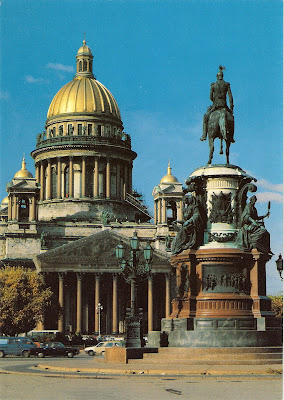 I was wondering what the glittering dome by the river was in the distance on Monday's aerial view of St Petersburg so I had a look in my folder of extra large postcards of the city. And here it is. The Cathedral of St Isaac.  It was built in swampy ground by the river and 10,762 tarred pine-wood tree trunks were sunk into the ground by an army of serfs.  Not much of a forest left after that I think.  On completion the dome was then gilded by a solution that included toxic mercury, the vapours caused the death to some of those same serfs. Around the dome are a dozen gilded angels constructed of special lightweight material.

During World War 2 the dome was painted grey. The statue outside is known as the Bronze Horseman (although it is of Peter the Great) and it is said that if it remains in this place then St Petersburg will never be conquered, so it was sandbagged during the siege of the city in WW2, and as can be seen remains unscathed.

The cathedral used to be the largest in the city and  was built for 14,000 standing worshippers but was closed  in the 1930s and turned into a Museum of Atheism.  Today it is only used for major religious ceremonies but the dome and angels still glistens under the sunshine.
Posted by Joy at 12:38