“Sunshine is delicious, rain is refreshing, wind braces us up, snow is exhilarating; there is really no such thing as bad weather, only different kinds of good weather. ”  John Ruskin

As the seasons seem to be all mixed up at the moment here is a barometer view of the weather. I keep tapping my barometer and it seems to be in a rain to fair loop. This miniature sheet makes even the rain look cheery. There is another twist in that thermochromic ink has been used on the 27p stamp, the heat produced by rubbing with ones fingers changes the grey to sky blue.

The stamps and mini sheet were painted by Tony Meeuwissen whose varied portfolio can be seen here and they were designed by Howard Brown who says it is one of his favourite things to do.

The reason for the issue was the 150th anniversary of weather maps going on sale, I have been unable to find anything about that event however ten years later in 1861 the first public weather forecast was published in The Times newspaper.  The rest as they say is history.

A late Spring so the hedges are looking bare but the blossom has arrived so things are looking up.  Post your letters here, carry on up the hill past the church and  turn left and down the hill and head for Roy's Ice Cream van and  his 29 flavours, two new for this year.  Gaze out over Morecambe Bay while you lick, the suns warm and alls well with the world.
Posted by Joy at 23:37 No comments:


Gherman Titov was the first person to take a photograph of Earth from space but I can't find any quotes from him about his experience of seeing this fragile blue planet floating in space but then he was suffering from space sickness for a great deal of his day in space. He did write on his photograph so maybe that is just as good.  Famously he did say or, I imagine, shout with the excitement of someone just one month short of his 25th birthday "I am eagle, I am eagle"
But lets gently swoop lower down upon Earth and 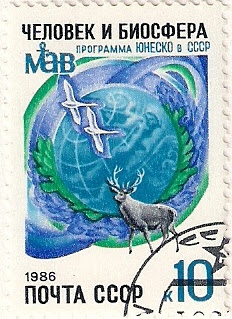 another Russian stamp which was issued for the UNESCO "Man and Biosphere Programme" in 1986. This is an intergovernmental program aiming to "set a scientific basis for the improvement of relationships between people and their environment globally" which was launched early in the 1970s. How to create sustainable developmental solutions for biodiversity loss in the world is a great conundrum and UNESCO has introduced programmes to address this for the various types of eco-systems across the world.  One initiative is the concept of a world network of biosphere reserves with international protection, one of which is the German
Wattenmeer or as we know it in English, the Wadden Sea. This is an intertidal zone and wetland of the southern North Sea, parts of which are on the UNESCO World Heritage list.  I live by an intertidal bay, it is an endlessly fascinating environment which changes from day to day yet remains the same mysterious and beautiful expanse.
Next journey north to the Arctic, I always like stamps with an attached label and even better this one has a map.  The theme is the preservation of the Arctic which since this stamp was issued has been put under more threat both to its pristine nature and its inhabitants
who find the ice melting beneath them. This atmospheric stamp shows polar bears making their way across the ice floes. The polar bear is the largest land carnivore

On the southern headland of the island of Sylt in North Frisia on the North Sea coast where it is said witches dance on the dunes, the souls of shipwrecked sailors wander and the goblin Dikjendälmann may be seen sits the Hörnum lighthouse.  Active since 1907 the keeper's house is now used as a registrar's office, it is both a popular tourist destination and a place for weddings.  This beautiful area's lighthouse sits on top of a dune, by federal law protection is given to all historic lighthouses. 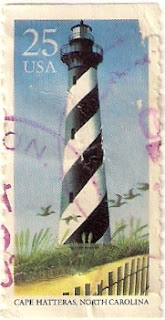 You can climb the 248 iron spiral stairs both day and night of the Cape Hatteras lighthouse in North Carolina.  It is next to the visitors centre and Museum of the Sea so it sounds like a great day out.  Here is where the warm Gulf Streams collide with the cold Labrador current producing ocean storms gaining it the name "Graveyard of the Atlantic".  Built in 1868 the lighthouse came under National Park ownership in 1936 when it had been abandoned.  Coastal erosion meant that the lighthouse was in danger of falling into the sea so in the 1999  "Move of the Millennium" the whole things was relocated further inland. It is the tallest brick lighthouse in the USA coming in at 210 feet.  The stamp is 1 of 5 issued in 1990 as part of several topical booklets on Americana and this one was released to commemorate the US Coast Guard and US Lighthouse Service, portraying  lighthouses of the five major coastal regions. The stamps were designed by the artist Howard Koslow who has now produced all of the subsequent lighthouse stamps. I love his use of the geese flying past this one.
These are the only  lighthouse stamps I have but interestingly they manage to take in three continents and this one is no longer in the country that issued the stamp. Pelican Point lighthouse was built by the South African government in 1932 when it administrated the Walvis Bay Territory. The bay was called Walfischbucht in German meaning "Whale Bay" which in Dutch is Walvis Bay.  After Namibian independence in 1990 this lighthouse became part of the country.  It stands on the naturally protected harbour of the SW African coast (which is the only deep water port of the country) and continues to be active not only with light but also with a fog horn. Unlike the previous US lighthouse's position being eroded by the sea the spit that the Namibian lighthouse sits on is extending itself.
Lastly something a similar shape to Lighthouses but actually a water tower. This stone water tower dates from 1530 and was part of the city of Pilsen's (Plzen̆ in Czech) first water system. One of the attractions of the city is a tour of the labyrinth of historical underground corridors, cellars and wells and it is possible to see  the water tower underground.  Nearby if something stronger than water is required is the Pilsner Urquell Brewery.

The Joys of Spring 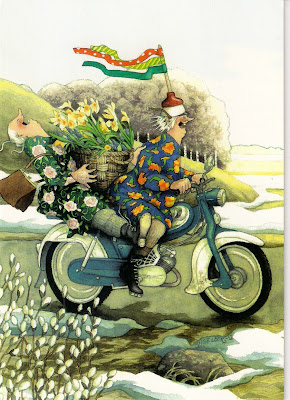 The symbols a Finnish Easter, pussy willow and daffodils.  Have the Aunties jokingly  pinched that basket of daffodils and making a quick getaway or are they just full of the joys of spring?  Our daffodils are weeks behind, they were just opening up and then they disappeared under mounds of snow.  The tough little things have shaken that off and once more putting the effort into blooming. I remember a few years ago it was thought that global warming would be a threat to the large, cold resistant cells of daffodils.  After the coldest March since the 1960s I guess those flowers have nothing to worry about.
Posted by Joy at 20:50 No comments: