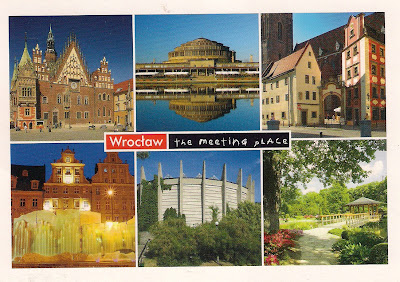 One of the hosts of next month's Euro 2012 Football Championships is Wroclaw in Poland.  What a beautiful place to stay. Sitting by the River Oder Wroclaw is the historic capital of Silesia and can trace its history back to the 10th Century.  The British historian Norman Davies, noted for his histories of Europe and Poland called Wraclaw "the flower of Europe".  Not only is it culturally and architecturally interesting but it has had a turbulent and action packed history, over the centuries being part of Poland, Bohemia, Austria, Prussia and Germany. As part of Germany it was known as Breslau, changing its name after World War Two back to Wroclaw in 1945 when it once again became part of Poland.

The card shows top row L to R - 1)  The Town Hall (Ratusz) built and developed from the 13th-16th Century; 2)  Centennial Hall (formally the People's Hall) constructed in 1911-13 when Wroclaw was part of the German Empire it is an early example of reinforced concrete architecture and listed as a UNESCO Heritage Site;  3) Town-houses from the 16th and 18th Century much photographed and called  Hansel and Gretel because of the archway linking them is like a couple holding hands.

Bottom row L to R - 1) The Market Place;  2) The Raclawice Panorama contains a cycloramic painting of the battle of Raclawice. Stand in the middle and apparently you will experience many optical illusions;  3) The Japanese Garden designed by Mankichi Arai in 1909-1912 and located in Szczytnicki Park.  It was restored in 1996/7 but soon after it was under water after flooding, despite 70% of the planting having to be replaced it reopened again in 1999.

The card came with some

Polish Cities stamps. The first two showing the facade of the All Saints Collegiate Church in Sieradz, the other stamp shows the coffin of St Adalberg in the cathedral in Gnienzno.


Thank you Monitorka for showing me your city in this card.
Posted by Joy at 23:41 1 comment: 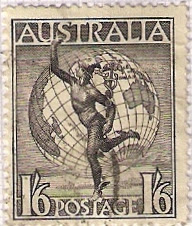 Hermes the winged messenger, patron of boundaries and travellers flies across the globe on this Australian stamp of 1948.  Flying from an island to Africa 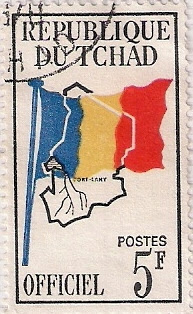 and the landlocked boundaries of Chad over its flag on the stamp of 1966. With the Sahara Desert in the north it is not surprising that they have accentuated the major rivers in the south flowing into Lake Chad, the source of water for the four countries surrounding it (Chad, Cameroon, Niger and Nigeria). 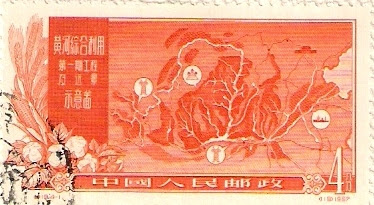 A stamp of 1957 rather grandly called "Harnessing of the Yellow River", the various ways on the stamp are hydro electric power, irrigation, dams and levies to prevent flooding and ship transport. The river has been called the cradle of Chinese Civilisation but devastating floods throughout history means it also has the nickname China's Sorrow.  It carries huge amounts of silt which means the continual elevation of the river bed and silting up of flood barriers.  Harnessing the Yellow River is a continual project.  I would imagine the ships 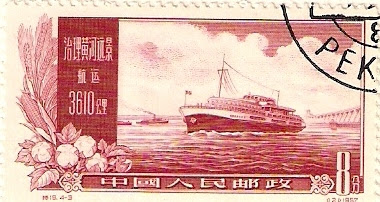 plying its waters must have up to date maps.  Much easier to follow the rail tracks and signals in this stamp of 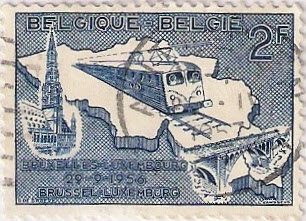 1956 celebrating the electrification of the Brussels to Luxembourg Railway link with a Type 122 electric train and a railway bridge on an elevated map.  Travelling to a sports event?  Here are two Albanian stamps 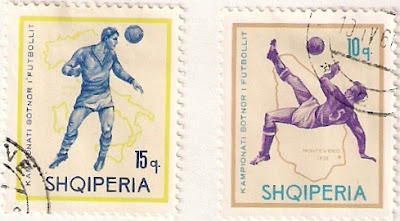 from 1966 for the World Cup Championship to be held in England celebrating the winning countries from the past.  The distinctive shape of Italy in the background with an Italian player heading the ball from 1934 and the first ever Football World Cup in 1930 held in Uruguay (and won by them), shows the back to the goal bicycle kick.  Always spectacular when it comes off.


An entry to Viridian Postcard's Sunday Stamps theme of Maps 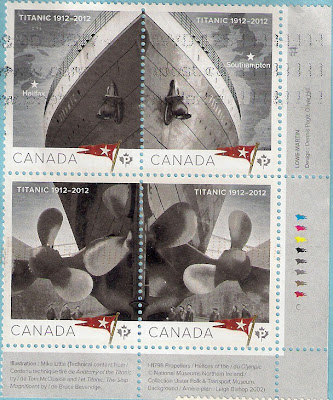 I was wondering if I had received any interesting stamps since the 10th of May for this week's meme challenge and then on Tuesday this wonderful quartet came sailing into my mailbox from Canada. Lots of countries have gone for the easy option of black and white historic photograph for the Titanic celebrations (including my own) but I think the Canadian issue is one of the most imaginative.  Four stamps making the whole. As my postcrossing friend Denise is a stamp enthusiast she has retained the sheet edges containing all that lovely philatelic information.  The other thing she likes to do is theme her stamps so from her collection of older stamps she made up the postage with 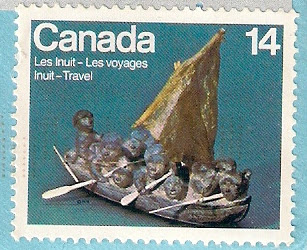 a 1978 Canadian Inuits 'Travel' series showing a soapstone sculpture of a sailing umiak by Joe Talirunili.  This is a larger boat than the familiar kayak, and more stable, being used to travel on the coast to summer hunting grounds. The title of the sculpture is "Migration" which is what some of those poor passengers who only made it to the graveyard in Halifax were doing.

from Eeva in Finland so then I was even more excited.   From left to right she has used the 2010 stamp of the Torronsuo National Park, a near natural area of raised bog, you can see where it is from the little map on the stamp. We have raised bogs here and they are fascinating habitats even though sometimes there is a possibility  of disappearing up to your knees in bog and getting very muddy.  I had not realised that Finland were doing one stamp a year on their national parks  and the next is one issued this year of the most recently designated park - Sekämeri, only the 5th marine national park. It consists of 160 kilometres on the western coast, 99% of it lies under the surface.  The designer Teemu Ollikainen took the picture above sea level on the top of the stamp and the marine biologist Heidi Arponen dived to take the underwater photo.

Next are the stamps for this years Europa theme of "Visit..."  These were designed by Johannes Ekholm who chose old Finnish travel posters. I love the travel posters of the 1930s but have never seen any Finnish ones before, as you can see Eeva, another stamp lover,  has left the stamp booklet edges on the stamp with their details  The first is part of the 20 miles of sandy beach of Hanko on the south coast of Finland,  the lake is Saimaa, the largest in Finland.  They both certainly make me want to Visit Finland, doesn't it look luscious. Lastly 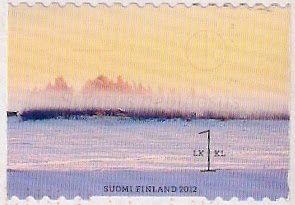 the first class stamp of the 'Clouds' set of 3 issued on the 7th May with into-the-sun photography by Timo Berry. No need to get your Cloudspotter's Guide out because the surface of the stamp has been pictogram printed using transparent lacquer which indicates the cloud types, number of clouds and the weather types. The circled 1 shows up but the name across the cloud of hazy "Stratus Nebulosus" is not too distinct on the scan.  Stratus clouds are most commonly around coasts and mountains and are the lowest forming of the cloud and when they are at 0 feet you could call them mist.

So thank you to my Postcrossing friends Denise and Eeva for making my week, and Viridian Postcard for coming up with the Sunday Stamp theme. 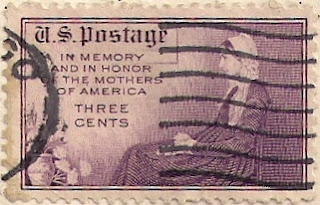 When Mrs McClure of Kansas City, past president of a group called American War Mothers, suggested to President Franklin D Roosevelt there should be a stamp issued to honour the mothers of America he enthusiastically took up her idea, sketched a design and sent it to the Postmaster General, James A Farley. With some modifications it was engraved and issued in 1934. The stamp collecting president often brainstormed ideas for stamps with Farley in the 1930s, what a marvellous perk of being president.  Here instead of my rather time worn stamp is a pristine version from Wikipedia:

The mother in question is that of James Abbot McNeil Whistler who painted her in 1871 as "Portrait of my Mother", the painting now always known as Whistler's Mother.  Famously she is painted sitting down because she could not stand for the length of time it would take to paint. The details of the original painting have been stripped out of the stamp I always wonder if she had a bad back because of the book placed under her feet, or was it just to make her more comfortable. Unlike the stamp there were no flowers in the painting but as that favoured gift of Mothers Day makes an appearance on the stamp so here are some more flowers 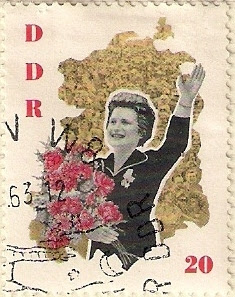 being held by Valentina Tereshkova, mother and first woman in space visiting East Berlin after her space fllight  in 1963. She would marry fellow cosmonaut Andrian Nikolaev the same year and would never return to space but said she would have liked to have gone to Mars, even if it had to be a one way trip.


An entry to Viridian Postcard's Sunday Stamp theme of -  Mothers

Belgian Letter Box, or should I say, Brievenbus 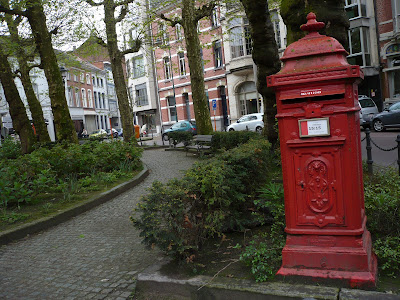 While on holiday I came across this wonderfully ornate, and sturdy, postbox located on the square called Regentieplein near the railway station in the Belgian town of Sint-Niklaas.  Unlike the GB boxes the design is 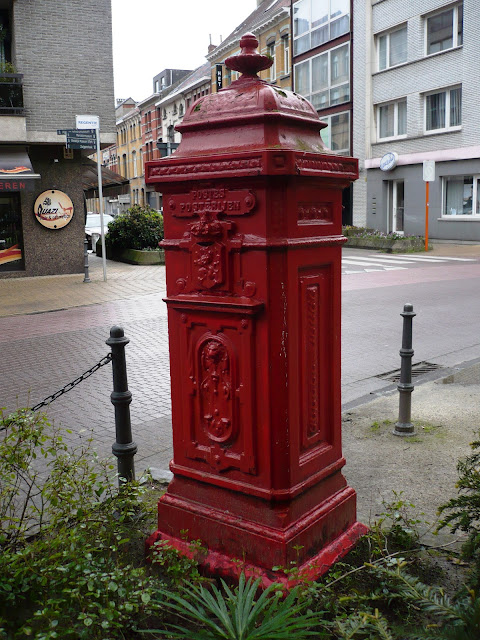 repeated on the back with the addition of the Belgian Lion from their coat of arms and the post office name in French - Postes, and Dutch - Posterijen.  I know nothing about Belgian postboxes but happily last year for Stamp Day the Belgian post office  issued a miniature sheet on old and new post boxes so from that I know that this box dates from the 1930s, a time when a box this size was a must.
Posted by Joy at 23:59 1 comment: 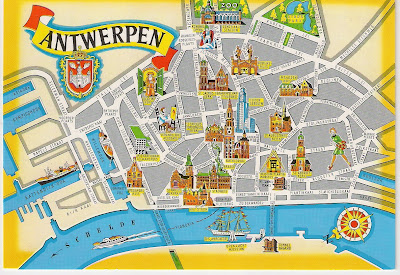 This is just the card to navigate your way around Antwerp so I think I will take it with me when I travel there this week. Although I can't spot Groenplaats (Green Square) which is where the general post office is. The message boards recommend taking a walk in there there because you can get pretty stamps instead of being given a ordinary alberrekes - which translates as the kings head stamp.  AND they sell postcards...
Posted by Joy at 19:34 No comments: