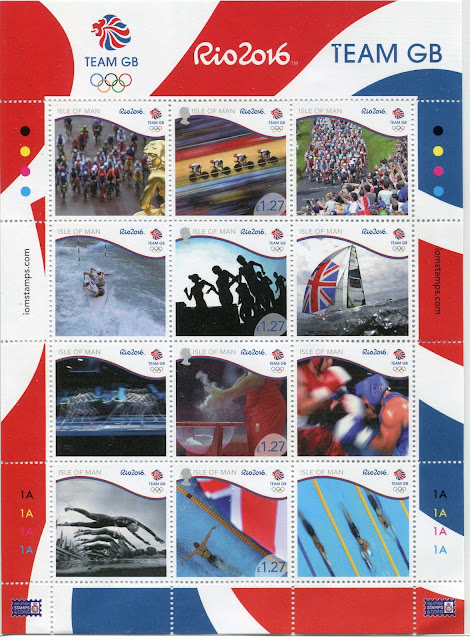 The Isle of Man issued four stamps (middle column above) for the Rio games and although I don't usually buy stamp sheets I couldn't resist this one which featured photos from the London Olympic Games.   They even produced a "Good Luck" poster (pdf warning) to the Manx participants of  the cyclist Mark Cavendish and  the shooter Tim Kneale and wished the cyclist Peter Kennaugh a speedy recovery (he had to withdraw from the GB Team after breaking his collarbone in the Tour of California as felt only 70 per cent fit). 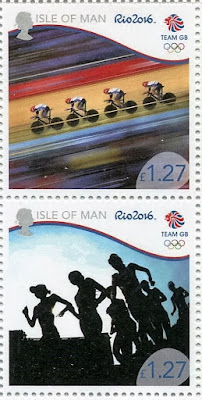 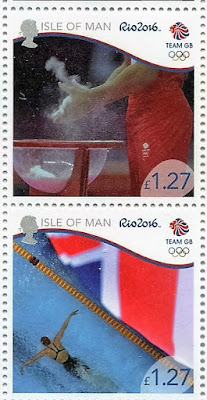 What did Royal Mail produce for the event? Zilch. I know its a busy stamp year for anniversaries but they could have at least produced one, or even a stamp booklet.  I will turn instead to multi Gold Medal winner, Laura Trott 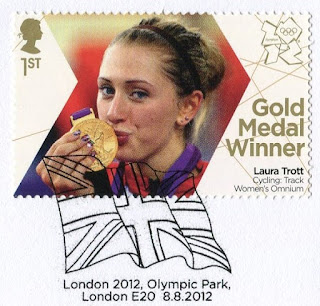 and she is also GB's most successful female Olympian of all time with a total of four Gold Medals, not bad for a girl who began cycling to improve her breathing being born with a collapsed lung and asthma. 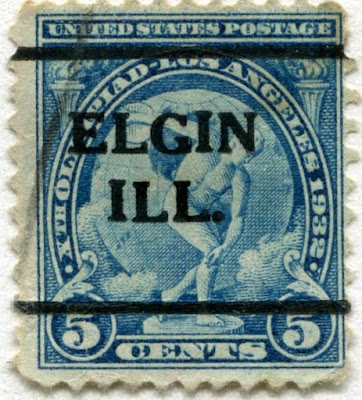 which appeared on the 1932 USA stamp for the Summer Olympics in Los Angeles. The famous c450BC Discobolus of Myron statue depicting harmony and balance.  The world globe spins in the background.  The cancel is a bit heavy but it does give me an excuse to show a postcard from the 1950s of 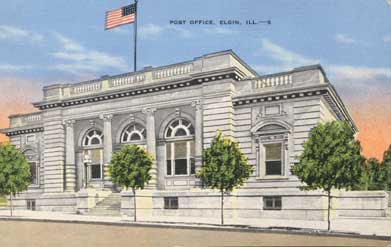 the Post Office of 1902 in Elgin, Illinois which it may have travelled through (found on the Post Marks Collectors site of pictures of US Post Offices). Alas it no longer exists and today one can only sit on a seat in its footmark (see the lament on Elgin Then and Now). 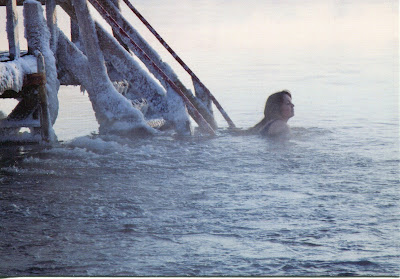 Hearing that the water temperature for the open swimming event at the Olympics was, to me, the very acceptable temperature of  21°C made me think about this postcard from Finland with the icy steps leading to the water.

Eeva told me there was a winter swimming place near their place in North Karelia - "Very refreshing".
Posted by Joy at 16:03 No comments:

We've had a big thunder and lightning storm this summer maybe one of the storm cloud floated over to  Finland. Here it is designed by graphic artist Nina Rintala it is from a booklet which in addition to the eight stamps included lots of tiny stickers to, as they say, "modify the postal item to your liking". I think we can all relate to that. The booklet can be seen here

I'm not sure I would like to be at sea during a thunder and lightning storm, there might be the excitement of actually being in a storm at sea but with the worry that one is surrounded by a lot of metal.
This cover shows the Finnjet ferry and the route which operated between Helsinki and Travemünde in Germany from 1977 to 2008 carrying more than 5 million passengers.  The miniature sheet concluded the yearly Nordic Maritime series of stamps. 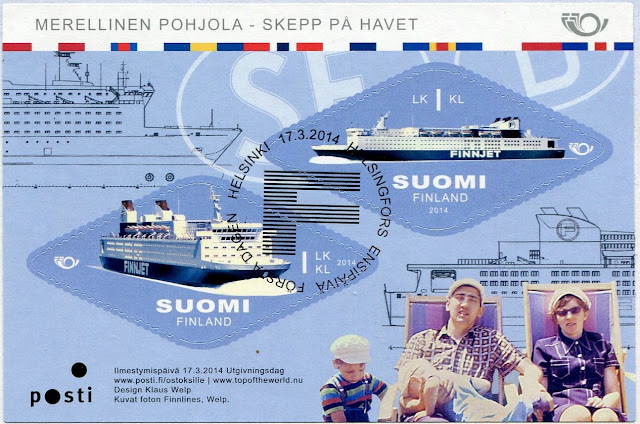 The graphic designer Klaus Welp has drawn on his own childhood experience when he used to journey to visit his German father's family.  What an opportunity to get your photo on a stamp sheet - the photograph depicts him at three years old  with his mother, father and brother when they travelled on the 'King of the Baltic'. He says "for 24 hours, my brother and I were able to roam around this floating miniature universe, exploring the orange-carpeted corridors and windy outdoor decks,”  The shape of the stamps are perfect for showing a ship to its best advantage.

Sail into Mariehamn, the capital of Åland and you have the choice of two ports. 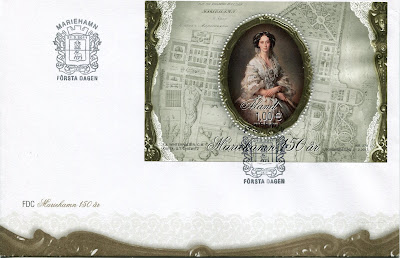 It celebrated its 150 years of foundation in 2011.  The town was established on suggestion of the Russian Emperor Alexander II to have a port near the shelter of  Svibyviken Bay (Finland and Åland were part of the Russian Empire). 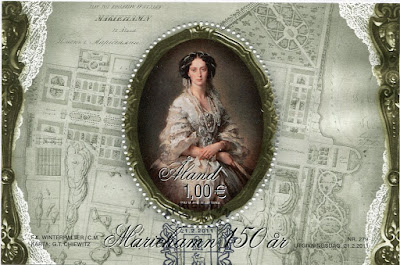 and is named after his wife, the German born Empress, Maria Alexandrovna (seen above).  A marriage that started as a love match but ended with her isolated and lonely. The commemorative sheet shows the Russian influence on the first town plan with its grid layout and long avenues and today the Esplanade Avenue which links the 2 harbours and major ports west to east is lined with linden or lime trees.

A log raft on the fast flowing River Ogowe (or Ogooué) which is the principal river of Gabon, its dark waters flowing for 1,200km.  What better river to celebrate on the stamp of Gabon, however this overprint is from 1936 when it and the other French colonies of Middle Congo, Ubangi-Shari and Chad were combined into the one entity of French Equatorial Africa (stamp history here). The four countries had originally issued their own stamps and they would do so again but not until independence in 1960.
A smaller river, Drina, but one of cool clear waters rising in the mountains of Montenegro and weaving for 346km forming a large part of the border between Bosnia-Herzegovina and Serbia.  The stamp shows it coming through a high sided gorge in Croatia.
A peaceful scene, two people enjoying a rainbow by the side of the Lanchang River which flows through China from North to South and when it leaves China changes its name to the Mekong, eventually entering the Pacific south of Ho Che Min City in Vietnam.  Sometimes called the 'Danube of the East'.
To visit a vastness of water The Great Bear Lake in the Northern Territories is the place to go.  The largest lake located entirely in Canada and its 7 million acres and 26 islands could take you a lifetime to explore, wrap up warm for it is frozen from November to July.  Perhaps a canoe in balmy times would be ideal but for a shorter trip
head for the Åland Islands.  On the reverse of the card it says -  with a canoe you are near nature. 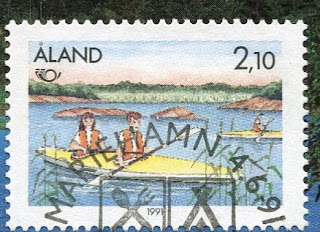