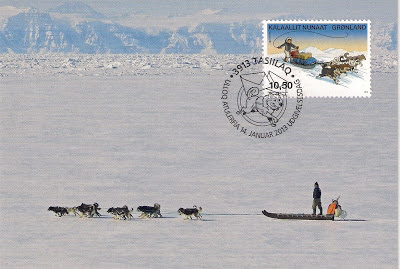 This year's Europa theme is " The Postman's Van" so we are being treated to stamp views of parcels being delivered across Europe.  I think the Greenland perspective is the most romantic. The postcard shows a dog sled skimming over the snow and ice in West Greenland 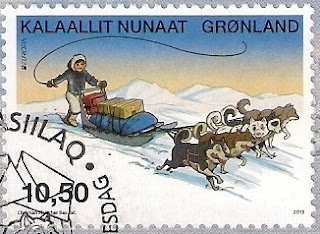 and on the stamp delivering parcels at high speed. The stamps were designed by Christian Fleischer Rex who was born in Denmark but brought up in Greenland's capital, Nuuk, where he now runs his own business. Qualified in animation he has worked on several films and also illustrated novels, children's books and created his own graphic novels, one of which is about the Greenland legend Kaassassuk (The Orphan).   This story was featured on the last of the 'Greenland Comics' series in 2011, which he also designed. 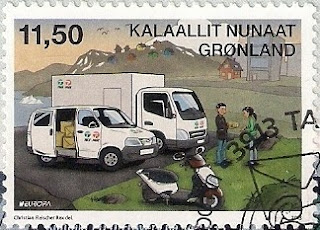 For barrelling along the roads of Greenland here are the vans loaded up and delivering, it must be summer as there is only snow in the gullies of the mountain behind the scene. I like the little scooter parked on the grass. 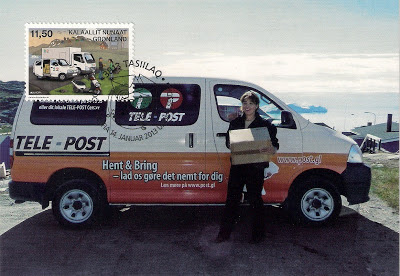 The Maximum Card shows "Postie at work in Ilulissat, West Greenland", a coastal town 120 miles north of the Arctic Circle (the direct translation of the name is "Icebergs" ) the towns  motto is "The town by the Ice-fjord", the fjord is a UNESCO World Heritage Site. That sounds like a great postal round, I'd like to jump in that van with her, looks like it could be fun.  Tele Post is the telecommunications, postal and emergency radio service for Greenland. The message on the side seems to translate as "Download and bring - lets make it easy for you.  Read more at www.post.gl"

In the days before the bland design houses employed by Royal Mail, whose first thought seems to be to head for the photographic archives, these stamps were produced by the great stamp designer David Gentleman.  Caenarvan Castle's vast edifice stands at the mouth of the Seiont River in Wales and its bulk was intentional. Edward I in his conquest of Wales built a string of fortresses across the country, his idea at Caernarvan was to echo the walls of Constantinople and project imperial power. The stamps show, left to right, The King's Gate, The Eagle Tower (the first part of the castle to be built) and Queen Eleanor Gate.  Unusual for monarchs at the time Edward and Eleanor spent a lot of time together, Eleanor even accompanying him in his military campaigns.  Their son, the first Prince of Wales, was born here in 1284. 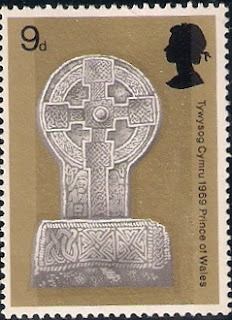 The other stamp of the set shows a Celtic cross from Mangam Abbey. I think this is the Cross of Conbelin an immerse stone cross wheel standing 8ft 6ins (2.61m)  with knot and plait work probably dating from 950-1050.  Mangam Abbey has a Stone Cross Museum of Roman and Celtic Crosses 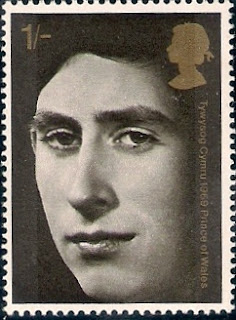 The set completes with a portrait of Prince Charles who was at the centre of  his investiture as Prince of Wales by the Queen. The eyes do make him  look like one of those murderous and machinating princes of the medieval period.

This is a stamp from one of the 'Smilers' sheets which I think were a series covering all the countries of the United Kingdom's castles. The two I show are from the 'Castles of England' sheet. This one goes back to our last invasion, that of William the Conqueror who started this castle in 1068 and the present construction developed from that.

One of my particular favourites is Orford Castle in Suffolk where you can get marvellous view from the top as not only do you have the hight of the keep but also the hill it is built on.  All that is left today is the keep and some of the outer fortifications.. Built in the 12th Century by Henry II it too was built to consolidate royal power in the region. I happened to take a photo of it last time I was there here. 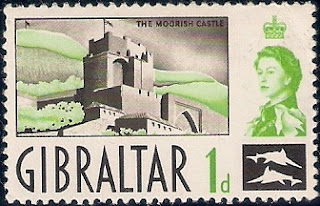 Enough of British castles here is the medieval Moorish Castle of Gibraltar which stands in a dominant and strategic position and played a part in the Arab conquest of the Iberian peninsula. Over time it has been destroyed and rebuilt.  Now lets turn to the quiet sanctuaries of monestries and abbeys in Austria

Here are some of the series of 18 stamps showing Austrian abbeys and monasteries that Wolfgang Pfeiller engraved between 1984 and 1992. The stamps are quite small which makes the quality of the engraving all the more amazing. Until I scanned these at first glance I thought the stamp on the right showed sheep in the meadow and then in its larger form saw  they were in fact trees.  From a brief search I cannot find any information about Pfeiller apart from the fact he was  born in 1941 and produced a great many stamps for Austria.

He shows beautifully the abbeys in theirsurroundings 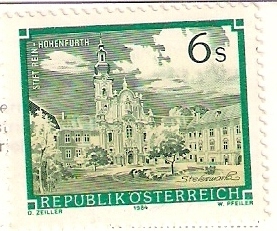 And the different colours are rather pleasing. 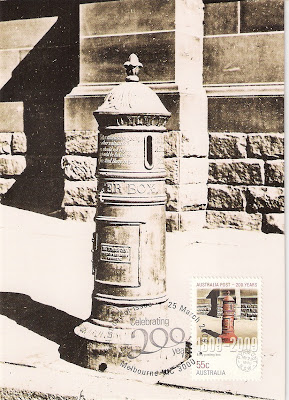 A wonderfully ornate Australian Letter Box from 1890 which stands 5' 9" (1.8 metres) high.  The vertical slot seen was so people on horseback could post letters without dismounting.  I presume from the postmark incorporated into the stamp that it is, or was, in Pyrmont, New South Wales.  The first ever Australian box was cast in bronze, the design, by TW Levinge, was based on the 1850s Belgium and Parisian boxes.  Installed in the suburbs of Sydney in 1856, they became widespread even being exported to New Zealand.  It was not until the 1870s that they were painted red. 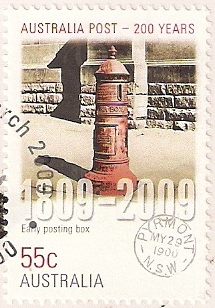 Bubb and Son from their Victoria foundry in Sydney (their name is on the door) made these boxes adding to the tradition of wonderful metalwork by 19th century craftsmen and are commonly referred to as Bubbs Boxes.  (Robert Bubb was a migrant to Australia from Gloucestershire in England)  The rounded top is a stylised  Australian flower of the waratah bush surrounded by acanthus leaves.  The copperplate writing looks as though it runs all the way round underneath.  There is also a more traditional opening on the other side.   Not many of these boxes survive, some are no longer used but have been adopted by the local area as historic pieces of street furniture. Australia Post has one that it lends out to people for events.
Posted by Joy at 11:08 7 comments:

The postcard muses in the title "the old mill's story". Whatever it's history it looks like the ideal place to chill out and dangle your  feet in the rushing water in the warmth of Finland's summer. Perhaps the feet are hot after a hike through the forest and nothing refreshing like the cool of a rushing stream.   The sounds of this place's  industry have faded into the past and just the burble of the water is heard.
Posted by Joy at 19:31 No comments:

My stamp accumulation seems to be boringly conformist when I started to look for different stamp shapes. If memory serves me right I've already shown the Finnish ones I have but hey I'll do what I can and "boldly go... " to space.  Here we have the first 3 crew space-flight and the first crew to fly without spacesuits and a mission which probably epitomises the cold war space race. Potentially dangerous modifications to Voskhod  (such as no ejection seats, no escape tower) and the reason for a three man flight were to upstage the two man US Gemini flights. There were no spacesuits because they couldn't fit them into the craft as it was built for two cosmonauts.

The mission is interesting for another reason in that the Russian military wanted an all pilot crew but Sergei Korolev argued for his vision of sending engineers, doctors and even poets into space and he won. These stamps have the symbols of the cosmonauts occupations. Starting from the left is the pilot Vladimir Komarov, (who later tragically became the fist person to  die in spaceflight)  next Konstantin Feokitstov the scientist and someone who didn't think the alterations were a problem as he was the lead designer of both Voskhod and Soyuz and the only spacecraft designer to fly in space. Lastly the physician with the bouffant hair, Doctor Boris Yegorov who has an asteroid named after him.  Once in space the mission was cut short, reason unknown.  One suggestion was the political turmoil on the ground (Khrushchev was removed from power while they were in flight) or perhaps more prosaically it was just because of the cramped conditions. 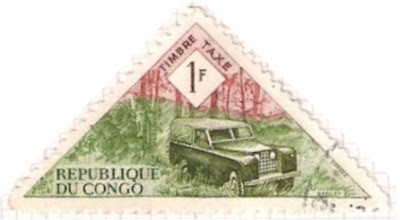 Next down to earth with the triangular Postage Due stamps of the Congo all on the theme of transport this one showing a Land Rover battling through the bush.  I only have three stamps but they are all by different engravers and I wonder if this is true for the full set. 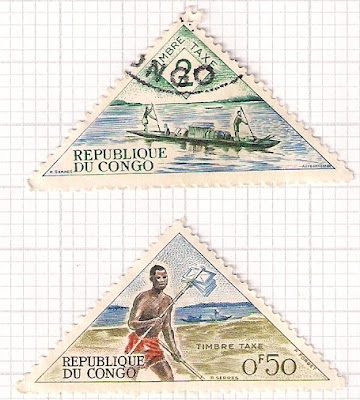 These two almost go together with the Pirogue ( a small flat bottomed boat) and a letter carrier running away from a boat, you could say, post haste. 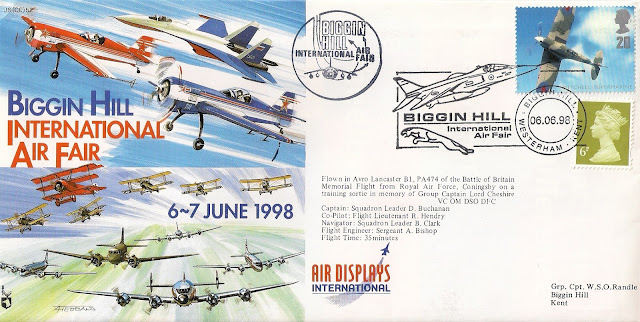 I was wondering what to post today and then noticed the date on this cover!

Biggin Hill International Air Fair used to be the largest civilian air show in the world and in the 1960s ran for 4 days, by the 1970s it was reduced to two and remained so until the licence for the event was revoked in 2010 so no June fly pasts this year.  This airport which was originally a RAF Fighter Station was once thought of as a backwater but it has turned into one of the top 15 business aviation hubs connecting to 750 airports, the owners thought the show was encroaching on their business services.  There is talk of reviving the event on a smaller scale (date unknown) but until then the best destination for plane spotters at the airport is the Biggin Hill Heritage Hanger where you can see their collection of Supermarine Spitfires and even sit in one of the cockpit.   Here is their collection of planes with the sunlight glinting on their fuselage and in pride of place the 'Kent' Spitfire.  The south east coast of England is a hotspot of historic airfields and museums.  Visiting one, Parham Airfield in Suffolk, last year there was a Dutch family trying to find out about their grandfathers aircrew, the custodian mused who might know and more pertinently who was still alive.

The stamp, (one of a 1997 set) shows an the Mitchell designed Spitfire. R J Mitchell was an aeronautical engineer of the Supermarine Spitfire who died in 1937 at the early age of 42, working to the end. He would never see his aircraft become the iconic symbol and most successful aircraft of World War 2 (22,000 and their derivatives built).  He was succeeded as chief designer by Joseph Smith who developed the design further.

The cover was flown in an Avro Lancaster B1 as part of the Battle of Britain Memorial Flight in memory of the most highly decorated pilot of WW2, Group Captain Lord Cheshire who went on to found the Leonard Cheshire Disability charity, its aim  to improves the quality of life for disabled people.

An entry to Sunday Stamps