Today it is time for Swedish adventures.  Katie has met a friendly cat who takes her on his back for a magical ride.  This is from the lavishly illustrated book 'The Cat Journey' by the artist and illustrator Ivar Arosenius, published posthumously in 1909.  This is one of a set of stamps of  Swedish stories which were issued in booklet form, the next is 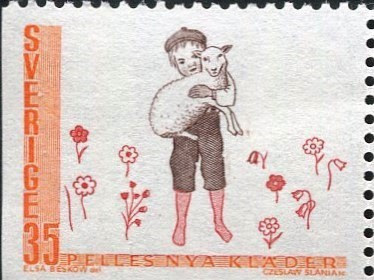 'Pelle's New Suit '(1912) written and illustrated by Elsa Beskow (1874-1953) who is sometimes called the Beatrix Potter of Sweden. The story is about Pelle who has a lamb whose coat grows longer and longer while Pelle's Sunday suit grows shorter. Pelle shears the lamb, cards, spins and dyes the wool . Finally the tailor makes a new suite for Pelle 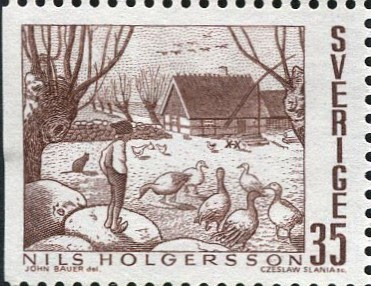 The Wonderful Adventures of Nils by Selma Lagerlöf (1906) and illustrated by John Bauer.  A journey across all of  Sweden by Nils and a farm goose 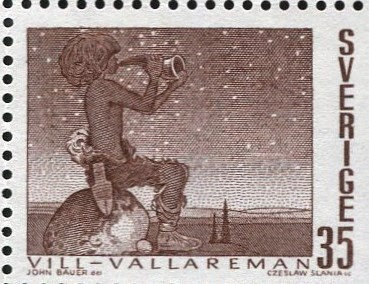 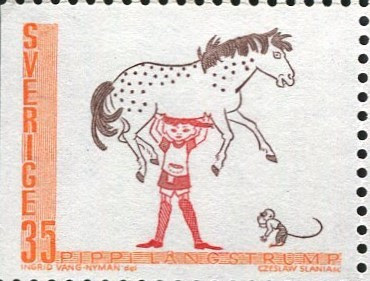 No set of Swedish stories would be complete without Pippi Longstocking by Astrid Lindgren and her first illustrator, Ingrid Vang Nyman (1916-1959). Pippi is using her superhuman strength to lift her friend the horse watched by the monkey, Mr Nilsson.
A set of 10 discount stamps were issued to celebrate Astrid Lindgren on the occasion of her 80th birthday.  I hope some of her birthday cards came with these stamps. Unfortunately I only have this one which is from a series of 7 books about a 7 year old girl called Madicken , her affectionate nickname, she only gets called her full name, Margareta Engström, when she misbehaves.  The artist is Maire-Ilon Wikland who has illustrated a large number of Astrid Lindgren's books.

I saw a photo of a summer solstice rainbow over the ancient stones of Stonehenge and wondered if I had any rainbows
and found a cute duo out in the Mongolian countryside for a picnic.
Best wishes are sent with this rainbow.  I enjoyed this set so as I am now out of rainbows lets see the rest

Designed by Johannes Graf who also does the intermittent series of lighthouse stamps, like these, a popular stamp to send on post.
A rainbow of colours celebrating the birth of Joseph Von Frauhofer, physicist, instrument maker and inventor of the spectroscope. The stamp shows the spectrum from red to violet broken by the dark lines now known as Fraunhofer lines or absorption lines. 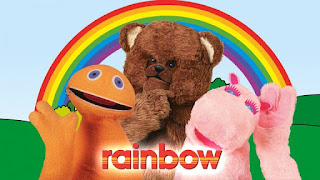 'Queuing at the Royal Academy of Arts' by Yinka Shonibara whose artworks feature beautiful brightly coloured fabrics and patterns that explore the issues of race, class and culture.  Royal Mail commissioned six Royal Academicians to design a stamp portraying the popular annual RA Summer Exhibition and Yinka Shonibara created this queue in the Burlington House courtyard waiting to enter. It's England so of course it is raining.  For postal lovers Burlington House also has a rather flash wooden postbox in the porch of the entrance but stamps must be bought elsewhere
and there may be a queue but not as long as this one outside the Main Post Office in Guernsey in 1969 when the first stamps of an independent postal administration were issued.  The stamp on the stamp shows the heads of both Queen Elizabeth I and II but a monarch goes walkabout

here where the people have been queuing to welcome Queen Margrethe of Denmark
For a queue with a view head for the Floating Bridge over the Moskva River.

The Proletarians sit for their portrait looking quite relaxed in this painting by Felicjan Szczesny-Kowarski(1890-1948) which must have been one of his last works because it is dated 1948. 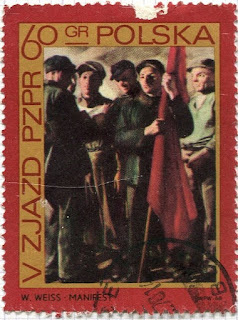 If you form a political movement then a manifesto is required and here indeed is 'The Manifesto' by Wojciech Weiss (1875-1950) considered the most important of early 20th Century Polish artists, this too was one of his last paintings (1950).  As you can see this stamp is not in the best of conditions but no matter for
the same year his painting made another appearance in a set dedicated to Polish paintings. This stamp was printed photogravure whereas the others are offset on chalk paper. You decide which is preferred. 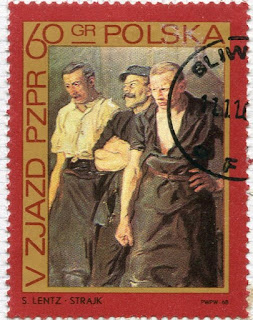 Here we have Strike by Stanislaw Lentz portraying the revolutionary events of 1905. Lentz was fascinated by the labour movement and portraits of it became his key subject from 1900-1915, 'Strike' was painted in 1910. He was influenced by the Dutch tradition of collective portraits and nothing in the painting distracts the viewer from observing the emotions shown. I like the font on these stamps, the PZPR (Polska Zjednoczona Partia Robotnicza) is the Polish United Worker's Party.  V zjazd is of course 5th meeting. You've got to love a language that uses a lot of Zs.  All the paintings can be seen in the National Museum in Warsaw
Stamps for the Polish Worker's Party were a regular occurrence and they are nicely varied in subject matter but this is the only other one I have.
Until the later part of the 18th century the Kingdom of Poland was one of the largest in Europe but was conquered and partitioned between Prussia, Austria and Russia.  Poland ceased to exist as an independent country and of course this led to revolutionary events such as that portrayed in 'Strike'. The Russians poured troops into the area to regain control but those turbulent years for Europe eventually ended and stamps of Poland re-appeared in 1918, the peace treaty with Russia celebrated on the above stamps with a sower and a rainbow of hope.
Another worker but this time a miner from the mineral rich area of Silesia, I like the Arts and Crafts vibe of this stamp but possibly a world away from reality of mining life. Maybe he is off to vote. The plebiscite of 1921 was for the 1.2 Million citizens of Upper and Lower Silesia to vote whether to join Poland or Germany.  It was policed by French, British and Italian troops and although there was violence and unrest the vote itself was peaceful.  The vote divided on ethnic lines for Germany in the west and Poland in the east and it was indecisive. A wry smile by me as we are living through a divisive vote in the UK at the moment however unlike here there was decisive action in Silesia by the Inter-Allied Control Commission and the League of Nations who divided the country between upper and lower Silesia between Germany and Poland, a compromise. Things didn't end there for there was still unrest but after World War 2 Upper Silesia was ceded to Poland.  Linn's Stamps News have a fascinating and snappy overview of those turbulent years here and they suggest the plebiscite issues make an interesting collection, pity I only have one lone stamp.

Sunday Stamps II prompt this week is the Letter P - here for Poland, PZPR, Paintings, Proletarians and Plebiscite - See It On A Postcard

Austria and outer space is something which does not immediately spring to my mind however I would be wrong as  it turns out they have been involved in space research since the 1950s and are members of the European Space Agency. 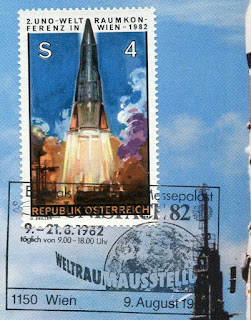 Austria chaired the UN Committee of Peaceful Uses of Outer Space (COPUOS) from 1957-1996 and in 1982 issued this stamp to commemorate UNISPACE II - the UN Conference on Peaceful Uses of Outer Space held in Vienna.
Before setting off into outer space on top of highly inflammable fuel perhaps one might take time out to offer a prayer of safe return here in Oberwart which as that beautiful handwriting says is located in Burgenland (South East Austria).  The stamp shows the old parish church rebuilt in 1463 and the new parish church built in the 1960s.  I would take bets that the old church will outlast the modern.  You might have noticed that Otto Zeiller (1913-1988) has designed both of these stamps and of course the rest of the 'Beautiful Austria' issue.
Who might we encounter in outer space?  This is Adam who Rudolf Hausner (1914-1995) depicted repeatedly over the decades subtly changing and based on his own image.  No wonder when they held a retrospective exhibition of his works it was called 'Ruldolf Hauser - it's me'.  My thoughts on when seeing this stamp for the first time and observing the hat was linking it in my head with Guinan, the quirky and wise alien played by Whoopi Goldberg in Star Trek.  Hausner has been called a "painter of the landscapes of the soul" and his style can't be classified although people try, calling it fantastic realism and him a psychic realist.  The Nazi's had other views and designated him a degenerate artist during World War 2.
Mercury doesn't need fuel or rockets to race around the world just wings on his hat and feet.  This stamp is for express delivery use and is the second issue which was overprinted 'Deutschösterreich' - German-Austria; a political desire of unification by Austria at that time as it emerged battered and without an empire at the end of the first world war.

Sunday Stamps II prompt this week is the Letter O - here for  Österreich, Outer Space, Oberwart and Otto - See It On A Postcard