Perhaps these are the most appropriate stamps for me to show this week after some of my compatriots had a moment of madness and voted for the UK to leave the EU.  Ironically the FDC date of 1967 was the year General De Gaulle had vetoed British membership of what was then the European Economic Community for the second time.  The European Free Trade Association, the alternative for countries unable or unwilling to join the EEC is shown with their flags, today there are only two members, Norway and Switzerland.  I suspect we are going to hear a lot about tariffs and trade deals in the years ahead while hoping environmental and workers rights are not denuded.
Another international organisation with a membership of 190 countries whose crime fighting headquarters are in Lyon, France.  The stamp shows Interpol's logo with the flag of Burundi.
On first glance I thought this stamp was for the world gathering of scouts every four years, the Jamboree, but discovered that it is actually Malaysia's national Jamboree which each state takes it turn to hold.  This Jambori of 1974 was in Johor, one of the most populous states in Malaysia.
In celebration of the sporting summer I'll end with the Balkan Games, first held in Athens in 1929.  As you have guessed from these stamps the 1963 games were held in Bulgaria (Sofia).

One of the wonderful things about stamps and postcards is they introduce characters unknown to me and Norway's Christmas stamps of 2013 did just that.  These were two of the inhabitants of the fictional Norwegian village of Flåklypa dreamed up by Kjell Aukrust.
Norway Post showed the stamps and characters with an amusing post here. They mention one of Kjell Aukrust's other characters in the introduction "When Ludvig was featured on Norway Post’s Christmas stamps in 1988, Solan Gundersen was just a little jealous...".  I don't have those stamps but here is Ludvig in the stamp catalogue
and, as the entry says  he is one of the most popular characters, featuring in many films such as 'Solan and Ludvig' when something important was missing at Christmas, snow. 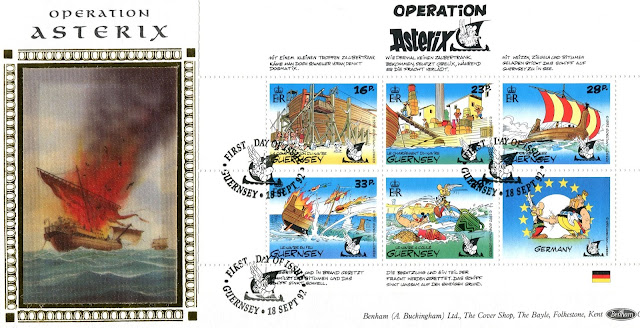 Now you possibly may be wondering why Guernsey issued an Asterix set.  The reason was the exciting discovery by a local diver of a Gallo-Roman ship in 1982 which had caught fire and sunk near St Peter Port harbour.  Although the ship was Roman it was probably crewed by Gauls just like Asterix and his friends and built in roughly the same era the cartoon is set. Peter Rowlands (son of the Guernsey Maritime Trust's Geoff Rowlands) made this connection asking if this was Asterix's ship.  Dr Margaret Rule (leading the excavation) said no, but the little adventurer would have known ships like it.  The stamps issued in 1992 tell the story as if it were indeed one of Asterix's adventures (the preservation and display of the ship became Operation Asterix). There were stamps and a Prestige Booklet issued, the latter was in different languages and, as you see, the FDC sheet I happen to own is in German

33p - Attacked and set alight, the pitch melts and the ship sinks quickly 39p - The crew and some cargo are saved. The ship settles slowly in the silt.  The last pane alters with the language of the sheet and who Asterix shakes hands with.

The excitement has been building but now the Euros are, at last, underway in France who won the European Football Championship in 2000 but of course they lifted an even more prestigious trophy in 1998, the World Cup, and were one of the teams that appeared on the 'Word Cup Winners' stamps designed by Madeleine Bennet.  They are off to a good start in 2016 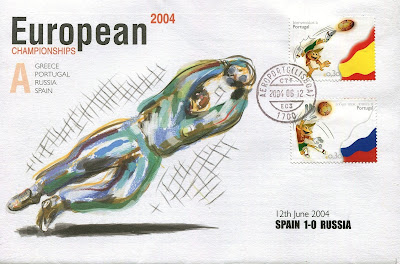 In 2004 Portugal with home advantage were one of the favourites but the dark horses of Greece lifted the trophy.  The mascots chosen for sporting championships can be weird and random but historically the ones for the European Championships at least do tend to be playing football and Portugal featured a  little boy called Kinas in his Portuguese strip who appears on the stamps with the country flags.  As England's first game of the championships was against Russia I thought I choose this FDC of the 2004 Spain versus Russia match and hope we could emulate Spain. Things were going reasonably well and we were indeed winning 1-0 until the four minutes of added time and the resulting draw.  Happily with a Welsh surname I can jump ship and support the home nation team that won yesterday.  Did you say "fair weather fan"? 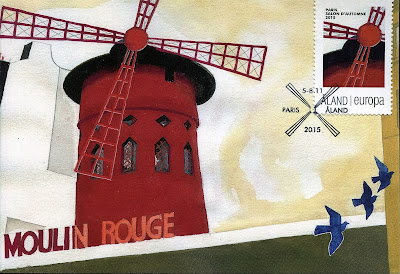 The European Championship opening ceremony featured cancan dancers so here is the home of cancan, the Moulin Rouge, the windmill of choice for Tord Nygren in his series of windmill watercolours for Åland's exhibition cards and stamps.  Åland Post traveled to Paris for the Salon D'Automne in November 2015.


An entry to Sunday Stamps II open theme week at  See It On A Postcard
Posted by Joy at 11:59 4 comments:

Walkies?  Well it looks rather more energetic than the usual cliff top amble.  Guernsey Police have two full time dog handlers with two dogs each (german shepherds and spaniels) and I don't suppose anything was any different back in 1980.

I was glad this week's theme was canines rather than just dogs as I think I used most of my dog stamps last time the theme was dogs in Sunday Stamps previous incarnation.  Saying that my next stamp is a dog, but just not the domesticated variety, and one that hunts in packs,
a Wild Dog, sometimes called African Painted Dogs.  There are five different types and the South African species is the most colourful distinguished by the amount of yellow and orange in its coat.
Perhaps it is a face only a mother could love but one can see its eyes are similar to this more ubiquitous species, the red fox,

whose eyes are giving a very alert and knowing stare in the stamp designed by Robert Giusti, or perhaps they have just glazed over when I say that this was USA's first definitive to contain a 'Scrambled Indicia' image that can only be seen through a special acrylic decoder lens'.  I don't understand any of those words but you can read about it here

The wildlife artist Robert Gillmor has taken a different approach on his portrayal of a fox
but then the Post and Go machine stamp set was called 'Winter Fur and Feathers' and it looks suitably snowy.  Happily in contrast I am sitting looking out of the window on to a sunny and warm June day.