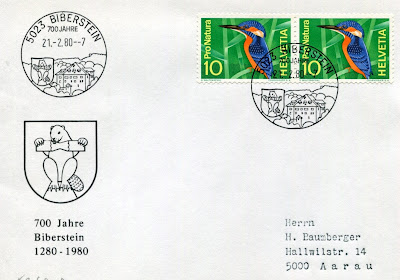 A cover celebrating the 700th anniversary of Biberstein (1280-1980) a village in Switzerland which lies on the north bank of the Aar River. Perhaps one might spot a kingfisher here, if not then there are kingfisher stamps. The village's castle was built in 1280 and features on the cancel as does its coat of arms - a beaver.  This is a play on words which I believe in heraldry is called 'canting' a visual pun on the bearers name and in this case the beaver (in German 'biber) is sitting on a stone (German 'stein') and so we have Biberstein
This post may mostly feature birds but now one beaver has appeared why not have another one

this time living near Lake Hovd in Mongolia.  Lets now return to Europe and Bulgaria for more brightly coloured birds
and ones known for their songs.  From left to right, Northern Bullfinch, Golden Oriel and Rock Thrush
Of course for vivid plumage the place to be is Africa and here is the Lilac Breasted Roller, one of the many birds that appeared on South Africa's 7th Definite Series along with fish, butterflies and flowers. For some reason none of the butterfly stamps have turned up with me.

The Woodland Kingfisher perches on the definitive stamp and may not look as brilliant in colour as the common kingfisher but once it unfurls those wings it dazzles.
The Common or Eurasian Kingfisher was chosen as Bird of the Year for Estonia's continuing series of stamps. Every year since 1995 the Estonian Ornithological Society has chosen the bird of the year which is linked to other events such as mapping localities and trying to get a better estimate of numbers. 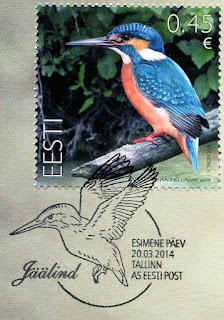 Most of Estonia's kingfishers are found in the south and despite it being a small country there are over 7000 rivers and brooks and 1,500 lakes, perfect for kingfishers if it were not for the very cold winters. 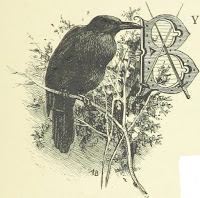 Sunday Stamps II prompt of the Letter B - for Birds, Beavers, Biberstein and Bulgaria - See It On A Postcard

This year is the Royal Air Force centenary and the Isle of Man was quick of the mark and the first of the British islands to take to the skies (GB will issue their set next month).  A lot of thought has gone into the stamps because much more than the aircraft appear on the stamp


for you will also find - the name of the aircraft, a medal ribbon and medal initials, the RAF ensign, the name of an important person associated with the RAF, the name of an RAF base and the GPS coordinates of the airfield.  The Sopwith Camel biplane, flown in the first world war, featured in the set also made a more dynamic appearance on an earlier British stamp issue
for the 50th Anniversary of the RAF (in the corner is a trio of English Electric Lighting fighters).
The iconic Spitfire was teamed with an  'important person' name check of Air Chief Marshal the Lord (Hugh) Dowding
and a 1986 GB stamp shows him with a Hawker Hurricane.  His foresight in introducing an integrated defence system, of radar, the observer corp, and significantly, fighter aircraft (the spitfire and hurricane) led to Britain being able to defend the country in the Battle of Britain in 1940.
The other person who gets a mention on the stamps is an engineer whose name appears on the Harrier stamp, Air Commodore Frank Whittle,
inventor of the turbojet engine which this stamp shows on a Vickers VC-10 airliner, only the supersonic Concorde has flown the Atlantic faster than the VC10.

The other feature of the Isle of Man stamps cannot be seen by the eye alone because it is printed in security ink and can only be discovered under UV light.  In Morse code the words of the famous sonnet 'High Flight' by John Gillespie Magee appear - "Oh! I have slipped the surly bonds of Earth/And danced the skies on laughter-silvered wings..." His story and poem appear here.  Magee flew for the Royal Canadian Air Force so lets see some Canadian airplanes
and I must admit I always enjoy paintings of aircraft better than photographs and what better artist could one have but Robert Bradford whose paintings feature on this 16 stamp set.  The McKee Trophy featured on the cover is awarded to a Canadian citizen for achievements in aerospace.  The stamp paintings are of 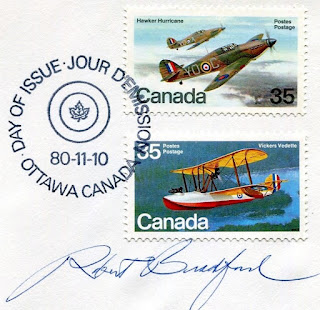 a Hawker Hurricane and one of the Vickers Vidette flying boats that helped map the north of Canada. In one of those quirks of fate and coincidence Robert Bradford and his twin brother were born on December 17th 1923 exactly 20 years to the day of the first powered flight by Orville Wright.  They both joined the Canadian Air Force during world war two and in a happy coincidence for my featured Isle of Man cover Robert was stationed on the island although never flew in combat because of an aircraft accident.  Bradford was involved with the establishment of the Aviation Museum at Rockliffe Airport, Ottawa. For all us mail lovers a fun fact is that the Royal Air Force used the field for experimental mail flights in 1918.   I was rather disappointed I couldn't find a military airfield in my stamp collection to form another link with the Isle of Man stamps but I think this Australian stamp with a
Sea Hawk helicopter being brought into land on a frigate might be a good stand in. 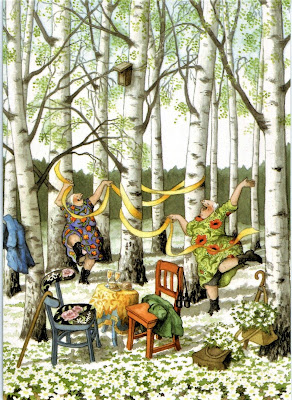 The happiness of spring as Inge Löök's 'aunties' dance around the silver birch winding their ribbons through the clearing. The wood anemone carpet the floor like "a galaxy of stars across the forest floor". The anemone is named after the Anemoi, the wind gods, which Aeolus (the ruler of the winds) sends out in early spring to announce the seasons arrival, and so we get its other name, the windflower.  Their quiet beauty always brings joy for their arrival marks the advance of spring.  The aunties look ready to toast that fact with their glasses of bubbly.

Postcards for the Weekend theme - Happiness/Joy - at Connections to the World
Posted by Joy at 22:21 4 comments:

Year of the Dog

The graphic designer and artist Zhou Linzhao was influenced by the designs of Chinese ethnic groups for his Year of the Dog stamp in 1982. This year at the grand old age of 99 his thoughts went back to his childhood in  Hunan and their family dog which inspired the two stamps he has designed for 2018 and can be seen here
Åland Post takes us back to the 19th Century with their miniature sheet contribution to the Lunar New Year celebrations.  The two porcelain spaniels were made in England in the potteries of Staffordshire 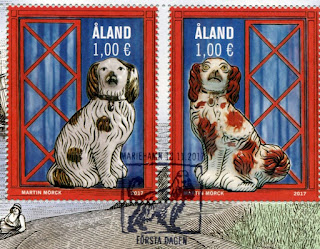 and in the 19th century no fireplace was complete without these two companions on the mantelpiece or kerb. There were many porcelain breeds of dog although the spaniel was the most popular, perhaps because unlike our present queen who has a love of corgis Queen Victoria's favourite was the King Charles spaniel.  Their popularity also spread to the Åland Islands and other parts of Scandinavia when sailors brought them home as souvenirs and these two now reside in  Åland's Maritime Museum.  One may also spot Staffordshire or china dogs in any museum recreation of a Victorian home. They were hand painted so no two are the same. 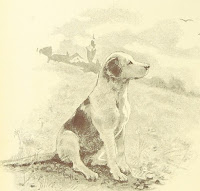 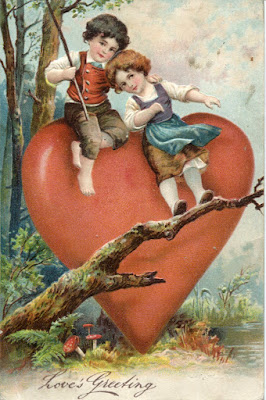 As the old song says "All the nice girls love a sailor" or at least the anonymous sender of this pretty card did.  I wonder if he could guess who had sent it? 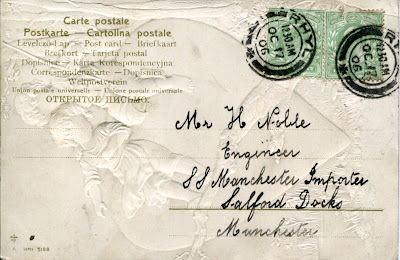 The lucky recipient was Mr H. Noble, an engineer on SS 'Manchester Importer' one of Manchester Liners ships which travelled back and forth from the Manchester Ship Canal to the eastern seaboard of the USA and Canada.  The card comes from Rhyl (dated 17th October 1906), a popular Welsh seaside resort at the time and the heart is winging its way to a ship moored on Salford Docks 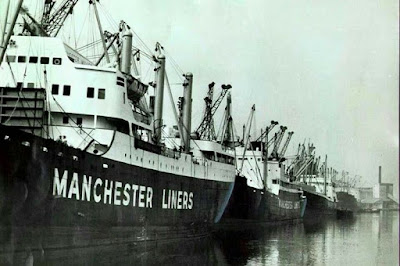 It could be one of these.  The Manchester and Salford Docks closed in 1982.

Lets call in to the Umtali Post Office to buy some stamps. Looks like the sort of place one could bump into and chat to people under the veranda. A couple of year's after this stamp was issued the town changed its name from Umtali to Mutare. It has always been a city of change for the original settlement of Old Umtali was moved because of the location of the gold and mineral mining and the so called New Umtali is where the post office was built in about 1895.  It was reported that lions and leopards roamed the streets and indeed a donkey was killed by them outside this post office. Although some colonial buildings remain in Mutare I'm not sure the old post office is one of them because the photograph below is of the Main Post Office today - 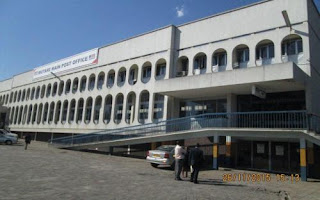 The local wildlife makes an appearance on the definitive stamps but I only have one of the set
of a rhinoceros, pity I don't have the 17c because that featured a zebra. Time to travel on
to our next destination and take a bus  to the airport
and we are on the way to Zambia. I wonder if there will be a welcoming dance?

Yes there is a vimbuza dancer and from the postmark we must have landed in the country's largest copperbelt town of Kansenshi-Ndola which has an airstrip serviced by Air Zambia.  The Kansenshi Copper Mine is the largest in Africa.  I think I would rather go and see some of the local wildlife
Here is the wonderfully named bat eared fox.  The stamp designer, Gabriel Ellison, was the woman who also helped design Zambia's national flag and coat of arms, was Head of Graphic Arts at the Zambia Ministry of Information and also a prolific designer of Zambian postage stamps which included the definitives from the 1960s to 1980s. She died aged 87 last year and her obituary can be seen here. 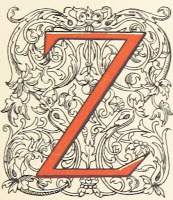 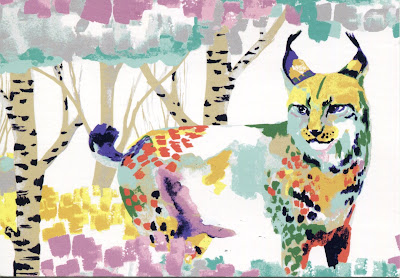 The stealthy lynx which is rarely seen, their toes spread as they pad silently along the forest paths, their paws like acting like natural snowshoes in the winter.  The scene makes me think of summer or spring with the silver birch and dappled colouring as the lynx melts into its surroundings. There is no artist's credit on the card but I discovered this is the work of the textile designer Saara Kurkela of the company Villilla so one could decorate a home with this design  on cushions or curtains.  She calls the design Snow Lynx so perhaps I'm wrong about the season, always good to have a bit of mystery.

Postcards for the Weekend theme - "Anything You Wish" - at Connections to the World
Posted by Joy at 15:25 3 comments: