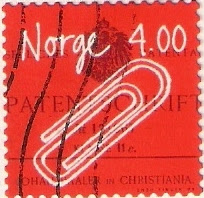 Sometimes the simplest ideas are the best but who would have thought that there is controversy on who invented this useful object.  The Norwegians claim it on this stamp of the 1999 set 'Norwegian Inventions' and during the second world war it was their symbol of resistance to the Nazis. The (more interesting than you would think) story of the paper clip here    But lets go to a room where there are no paper clips
although then again you may use them to clip some recipes together.  Is this a cooking lesson or breakfast?  I don't know but there is a full table, coffee, milk, egg, preserves, grapes, flowers and a kilner jar.  I wonder if there is a stamp somewhere celebrating the kilner jar, they always take me back to my childhood and my mother bottling fruits.  But for other household utensils travel to Romania whose strong folk traditions
mean that each rural area has its own characteristic. Wood and ceramics become both beautiful and practical. Left is a jug and plate from Vama-Maramurs, and wooden churn and pail from North Moldavia. 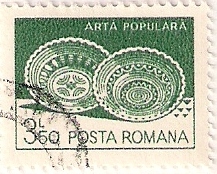 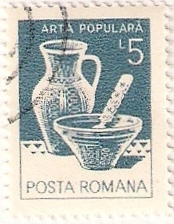 Ceramic bowl and pot from Marginea-Suceava 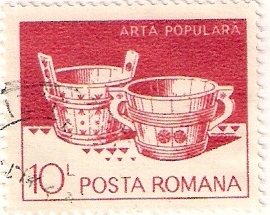 Wooden tubs from Hunedoora, Transylvania and Suceava in Moldavia.

Lastly objects that cross from merely practical to be art, the Rio Grande blankets featured on

the 5th of the aptly named American Treasures series.

An entry to Sepia Saturday. "Using old images as prompts for new reflections"

The bride and groom are making a run for it in this photo, no gently floating confetti like at today's weddings but some serious rice throwing, no wonder William is fending it off with his bowler hat.  I have the man by the bush with the large moustache to the left down as the thrower. He looks to be enjoying the moment.  The children are all gathered at the far left.  At this point as was going to show a postcard of of the church path entrance but it is hiding somewhere in my collection so I will resort to a photograph
of the floral archway of Beetham Church. The old postcard I have shows the archway much more luxuriant and completely covered by growth but this is what it looks like at the beginning of the 21st century rather than the 20th.  Getting back to my wedding postcards; the happy couple do not travel far for the wedding breakfast
and pose in a more traditional and formal way at Hazelslack Tower Farm and like the church arch there are climbing roses.  I never met Aunt Bell but my Grandmother must have been fond of her because she had a lot of photos of her in her collection. Lastly another slightly informal portrait
of Isabelle with her brother whose name I do not know but I find it a charming photo, both with white gloves, her hand on his shoulder and his around her.  Meanwhile half seen in the doorway is the flat capped boy from the church photo.
Posted by Joy at 00:23 14 comments: 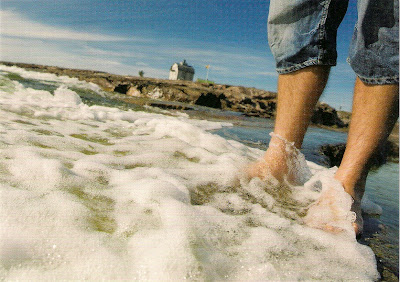 I'll be paddling in the north sea for the next couple of weeks on holiday on the coast of Suffolk but this postcard person is paddling in the Baltic Sea.  Maybe one year I will do this too.  For this year's Europa theme of "Visit" the Åland Islands issued this picture as their stamp.  The photo was shot at the old Kobba klintar pilot station, the island is by the inlet of the western harbour of Mariehamn. It is considered one of the most beautiful places of Åland and if the flag is flying then the cafe is open and you can look at the views with coffee and cake.  There may be a cruise ship or ferry sailing past out of the harbour.

My postcrossing friend Eeva sent the card with a first day cancel of Mariehamn and the logo of Visit Åland which is the Åland flag.


Thank you Eeva, wishing you warm Summer paddling.
Posted by Joy at 00:16 1 comment: 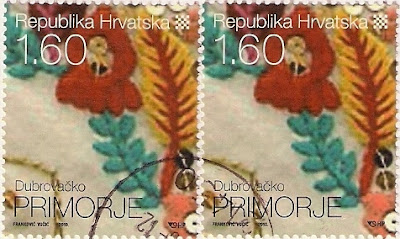 Each stamp tells a story of the country, its dominant ideology, culture and national identity but sometimes you get stamps that as this week's Sunday Stamps theme says "leaves you wondering what it is" and what it is saying so lets discover.

I can see it is some sort of needlework but happily this stamp gives lots of other clues, although one at first may wonder where Hrvatska is as most people know it as Croatia.  It also gives its date of issue (2010) so a visit to the Universal Postal Union site says it is a set of 4 Croatian Ethnographic Heritage set but nothing else. Looking for that title to tell me more, zilch,  I do discover on the first search page that there have been new Ethnographic Museums opened in Dubrovnik and Split, appropriate for a country just a independent republic in 1991.  But that still did not help me know what Dubrovacko Primorje was but you always know on the internet there will be an enthusiast on a blog somewhere. I wasn't disappointed because Lina's Land had been taking some embroidery lessons on the stitches of the national costume of this area north west of Dubrovnik and shows some of the beautiful embroidered scarves here.

Well that is one mystery partially solved but there is another that will be for every unknown. The stamp came in a bundle of used stamps on paper from all over the world but this one had been on a postcard, of which now only the small corner with the stamps on remained. Nooooo 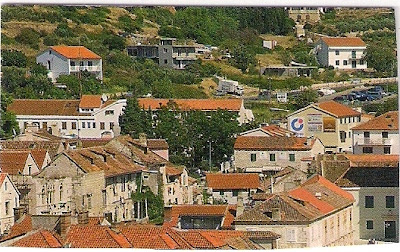 A glimpse of an unknown Croatian town 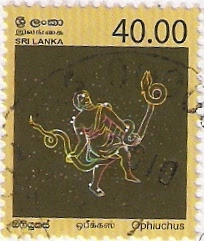 I recognised the word Orphiuchus on this stamp as years ago I'd read a book called The Ophiuchi Hotline whose title for some unknown reason had stuck in my mind so I knew it was a star system, but what I didn't know was what this stamp was. The stamp of course is a lot smaller than this scan and only when I discovered that the constellation is represented by a man grasping a snake did I go oh yes I see that. Neither did I know it was the 13th sign of the zodiac in an alternative 14th Zodiac system in Astrology. Don't panic if you are born between Nov 29-Dec 17 most still  go for the well known 12.  I discovered however that Sri Lanka  issued 16 constellations in their 2007 definitive set. 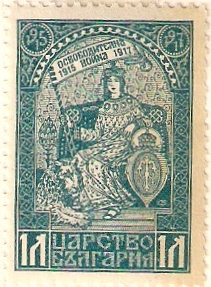 Lastly an old stamp I don't have a clue about. An alphabet I am not familiar with but think the stamp is Bulgaria but beyond that, nada. The significance of the date 1915 and 1917 in the banner and in the corners, nope not that either.  I wonder who she is.