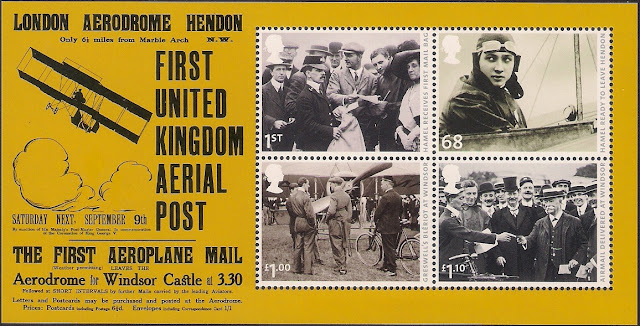 Sunday Stamps trip round the world is spending two weeks in Europe so this week I am at home with this miniature sheet  issued in September to commemorate the first UK Aerial Post.  So easy today to stick an air mail sticker on an envelope, pop it in the box and away it flies to another country. These stamps take us back to another age and the day of 9th September 1911 when Gustav Hamel  flew from London Hendon Aerodrome to Windsor Castle as part of the celebrations for the coronation of King George V (an enthusiastic stamp collector).  The idea of Walter Windham who thought this would be the ideal occasion for the promotion of aerial post. He had experimented with a flight in India earlier in the year.

Things did not go too smoothly on the appointed day, the weather was very windy and of the four pilots only the German Gustav Hamel was able to get his Blériot XI monoplane aloft. He made a pass over the aerodrome which excited the crowd, who had paid between sixpence and five shillings to view the event, and he set off for Windsor Castle, (the journey of 21 miles took just 15 minutes) where another large crowd had gathered to welcome the flight.  The next day was Sunday so no flights took place (no Sunday shopping in those days). On Monday four flights were scheduled but this time Hamel was flying a Farman biplane which was too heavily loaded with eight bags of mail, it crashed from a height of 40 ft and Hamel broke both legs on impact. The other three pilots continued the service, after striking to ensure Humel received compensation for his injuries.   A total of 16 flights took place during the week carrying 37 bags of mail. With one plane lost and various departures cancelled due to heavy rain the regular airmail services did not happen again until after World War I when aviation technology had advanced to be more reliable and able to operate in adverse weather conditions.

An entry to  Sunday Stamps journey round the contintents

Great stamps and a part of history as well. I'm regretting not actively collecting any more when I see I am missing issues like this.

What a beautiful mini sheet, I don't keep up with current releases any more, but wish I did when I see ones like this.

...and 8 sacks of mail was too heavy. How things have changed. those early pilots were very brave! Great post, and thanks for participating.

It's good to read the history behind the stamps. I intended to buy these when they came out and forgot all about it. I think they are excellent!

I enjoyed reading the history of air mail in the UK.