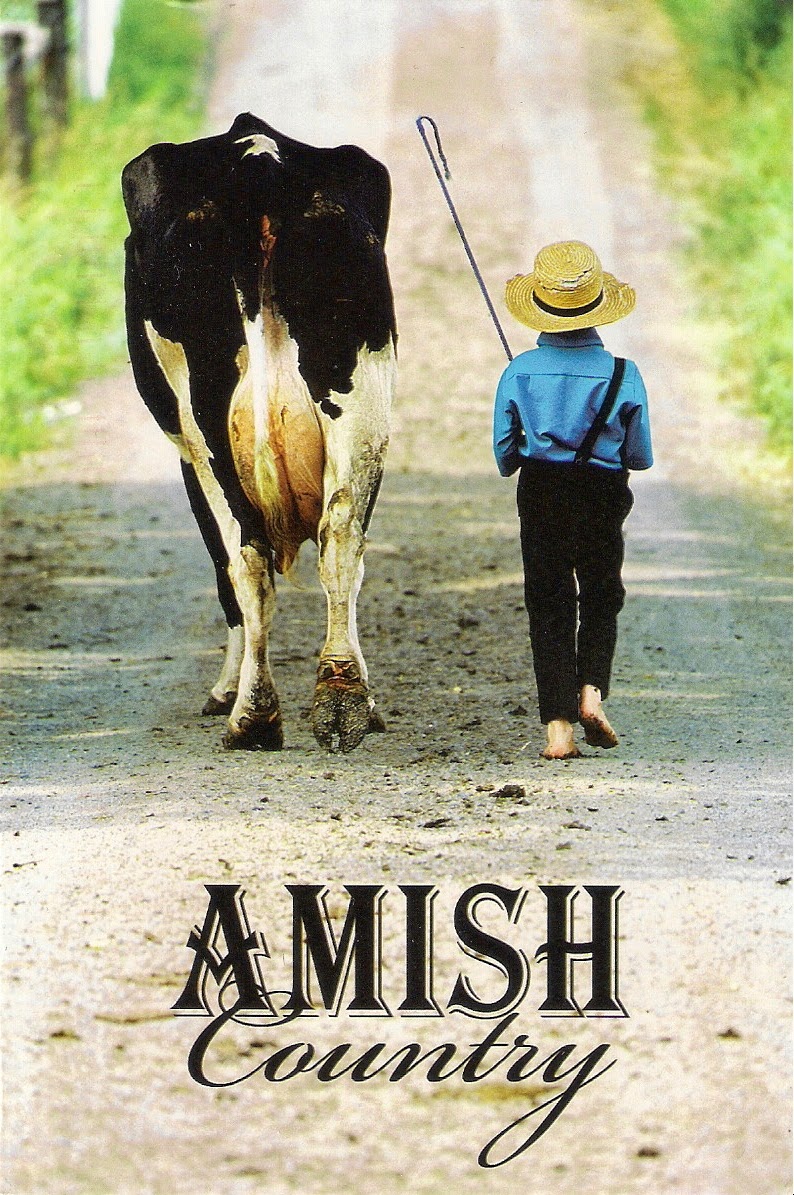 I don't think I would be bare foot anywhere near a drove road with all those little 'presents' sheep and cows leave but the scene the postcard shows is beautifully bucolic. The card was sent by Brad who like the Amish also lives in Pennsylvania and the card flew on its way to me with plenty of wings to take it to the skies.

A couple of acrobats of the air, hummingbirds, illustrated by Nancy Stahl and one of the 2014 Batman stamps issued to celebrate his 75th anniversary which took the batman symbol and character from each of the ages of batman.  The one Brad used is the earliest, the Golden Age.  Full sheet set here
Posted by Joy at 21:32 1 comment:

Here is the plant eating Edaphosaurus (the name translates as 'pavement lizard'), the descriptions of it refer to the frilly attachment on its back as a 'sail' and there are all sorts of theories to what it was and what it was used for but of course no one really knows. I like to think of it floating along a river tacking from side to side. The stamp is part of a set by the graphic designer Andrzej Heidrich (1928-) who is also famous for designing beautiful Polish banknotes and inventing a typeface.

Next is the only stamp I have that portrays both the skeleton and the actuality
which is appropriate because it portrays a dinosaur from Lufeng in Yunnan  and its Dinosaur Museum  displays four complete skeletons.  The area is rich in fossils of animals and plants.

Journeying to another continent we have what was part of Gondwana when dinosaurs roamed the earth
and now the Karoo region of South Africa, which is described as containing the richest fossil beds on earth.  Today it is a a semi-desert region, in contrast to the prehistoric times of rivers and wet tropical forests. The stamp shows a Bradysaurus which looks deceptively small on the stamp but in actuality it was 2-5 meters long and weighed in at a half to one tonne. 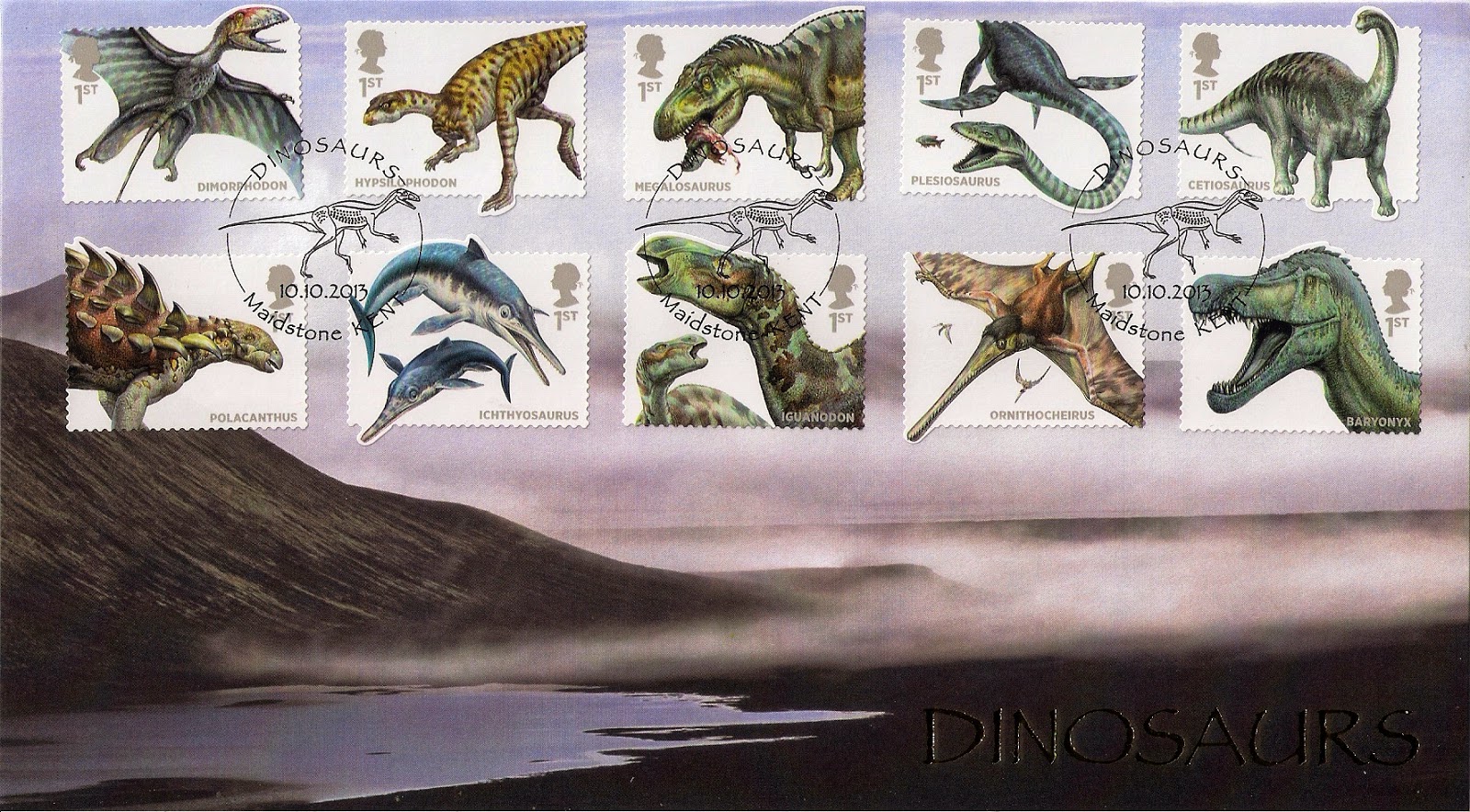 so I'll show a FDC of a steaming mist of a prehistoric landscape. The stamps were designed by the illustrator John Sibbick who specialises in prehistoric and natural history which fits nicely into his other speciality of fantasy where the imagination can run free.  The dinosaurs on the stamps certainly seem to have their own individual personalities.   All the species chosen to be shown on the stamps are ones that have been found in England and the south coast is especially rich in fossils. The Maidstone cancel shows a iguanadon (also shown on the bottom middle stamp) which was found in a local quarry in 1834 and incorporated into the town's coat of arms (see here) and known as the Maidstone Iguanadon. 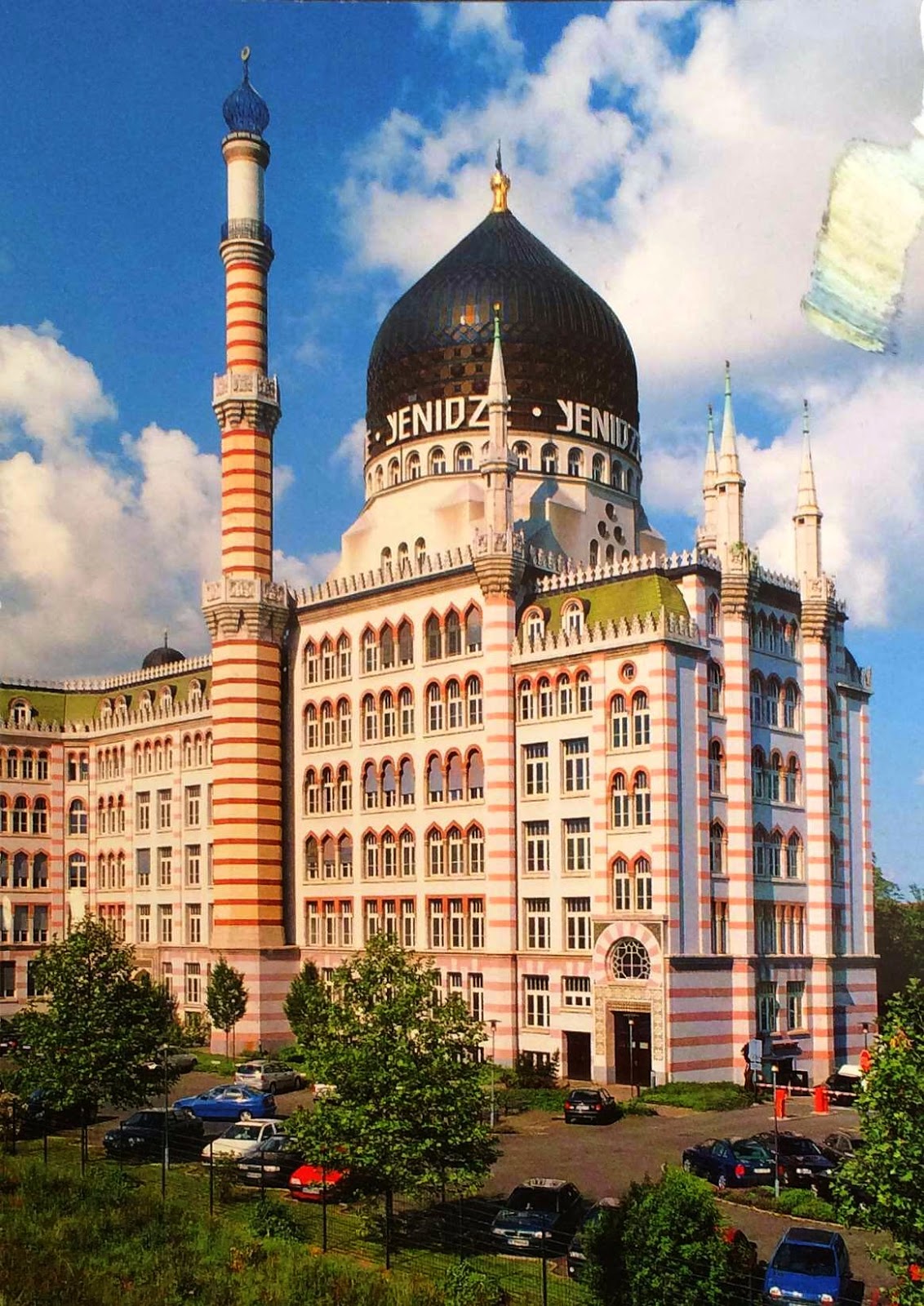 The wonderful opulence of what was the Yenidze Cigarette Factory in Dresden built (1907-1909) for Hugo Zietz who was the biggest cigarette manufacturer in Germany at the time.  He wanted to built something that resembled a mosque and looked different to anything else in Dresden.  It was both a building and a marketing masterpiece.  My sender, Eliska, tells me it has 600 windows of different styles and today it is an office building.

There is a history and a closer view of  the lavish exterior here with interior views of today's office space. The dome is 20m high within which there are regular readings of fairy tales, given perhaps by a modern day Scheherazade.

The card came appropriately with a stamp of a pleasure palace,
the Schloss Ludwigslust in Northern Germany (built 1772-1776)  which was both hunting lodge and a summer residence of Duke Frederick of Mecklenburg-Schwerin.  The stamp designer is Nicole Elsenbach
Posted by Joy at 22:09 No comments: 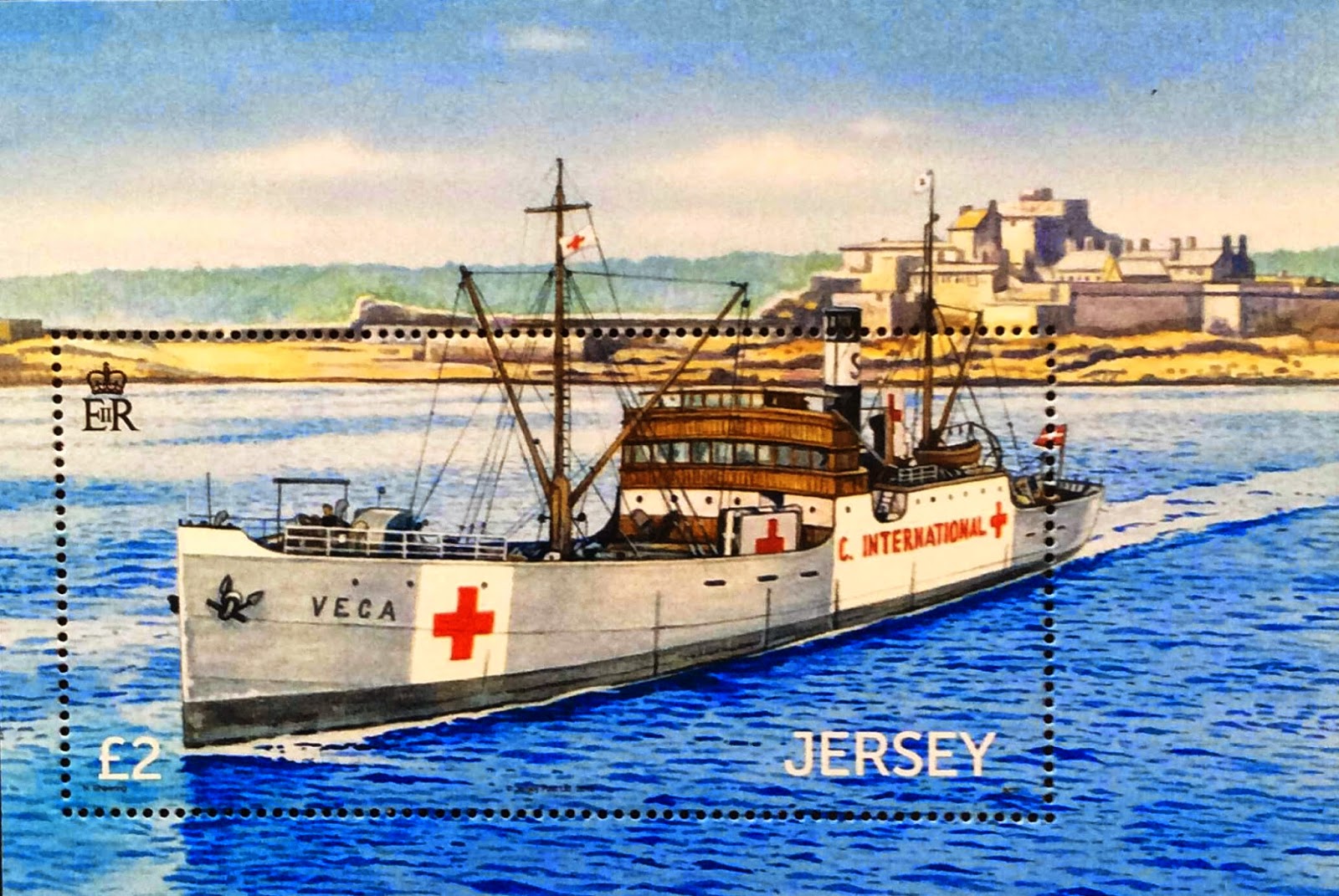 This commemorative sheet (along with a stamp set) was issued for the 150th anniversary of the International Red Cross and released in May 2013 to coincide with the month of the island's liberation by British troops in 1945.

The ship is the 'Vega' built in Gothenburg (1913) and chartered from Svea Lines by the International Red Cross in World War 2 for their relief work.  It provided a vital link to the islanders when Germany occupied the Channel Islands in 1940 by enabling them to keep in contact with their families. They were allowed to mail 25 word messages (which were only to concern family matters) and taken by the Red Cross from Jersey to Geneva and then distributed from there to the addressees.  It also carried vital medical supplies.  In 1944 when the Allies started the D Day landings and began the final push into Europe the Vega also prevented the islanders from starvation in the last year of the war with food parcels which were brought from the British Commonwealth supply stores in Lisbon.  The painting, by the stamp designer Nick Shewring, shows the arrival of Vega into the harbour at St Helier at the end of 1944.

With the end of war in Europe the Vega, loaded with general cargo, set sail for her home port of Stockholm and was the first ship to arrive there from London after the war. Returned  to her owners, Svea Line, she would be scrapped at Travemunde in 1954 but  never forgotten by the inhabitants of Jersey for it also appeared on a set commemorating the 25th anniversary of liberation issued in 1970 which were given to all Jersey school children.
The stamp above "symbolises the role of the British Red Cross Society (founded in 1870) in providing impartial care to people in need and in crisis, at home and abroad, in peace and in war". The design is by the Belgium artist Jean-Michel Folon.
Journeying to a much larger island with a smaller organisation responding to emergencies; this one travels in the remote Australian outback and it is the Royal Flying Doctor Service (RFDC).  A charitable organisation that provides emergency medical and primary health care services.  Established in 1928 it developed into a national service in the 1930s and the cancel couldn't be farther away from the sea of the first stamp for it is the famous town in the centre of Australia 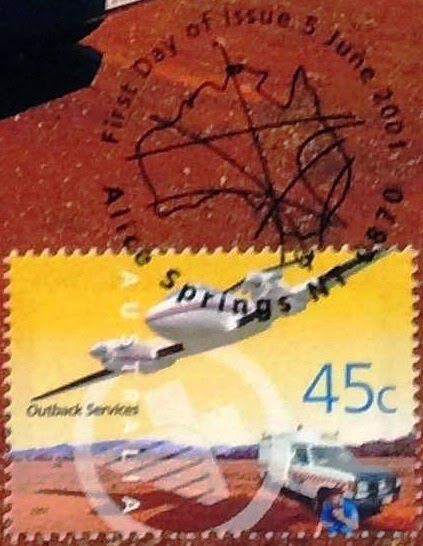 Alice Springs. The graphic designer is Lynda Warner and all the stamps in the set show panoramic vistas with a symbolic graphic icon for the outback service portrayed. 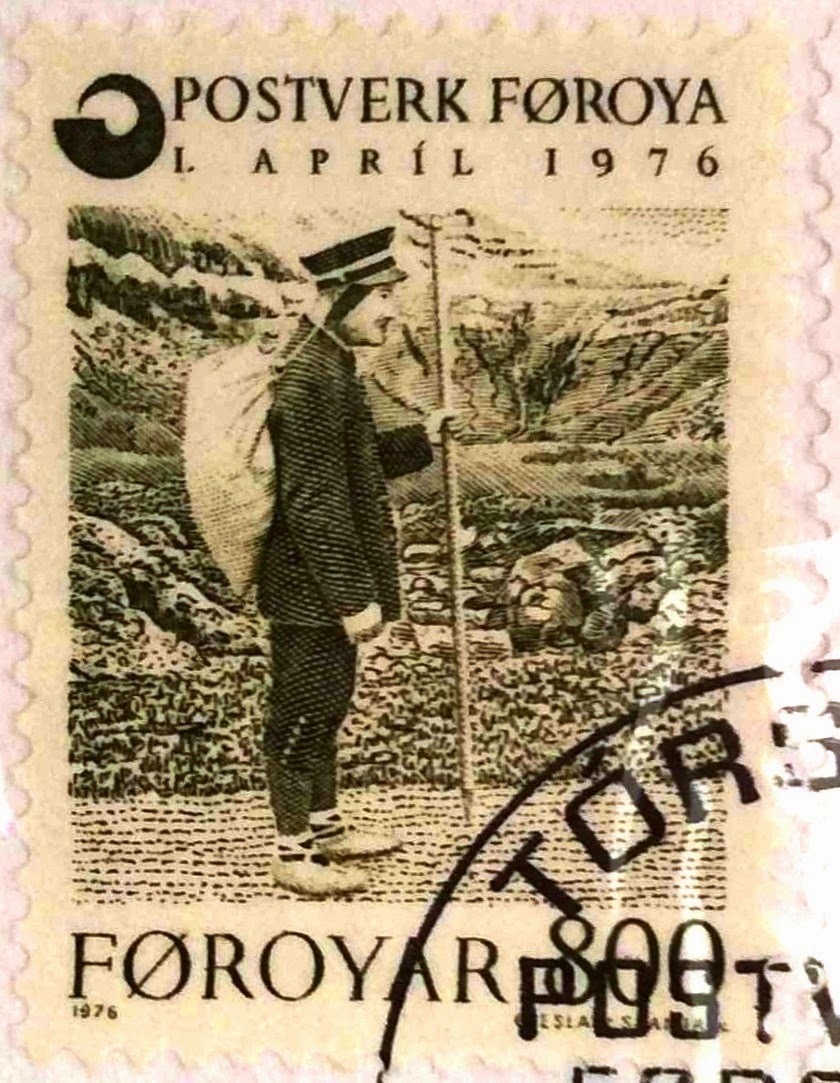 To commemorate the inauguration of, what was then, the newly independent Faroese Postal Administration in 1976 three stamps were issued of which this was one - "The Old Postman".  It was a very particular old postman, Jákup Andreas Henriksen (known as Dia) who lived in the village of Gásadalur on the island of Vágar and who had carried the post between the villages on the island from 1915, when he was 20, until the end of February 1976 when he retired at the age of 80. Through snowstorms and over mountains it was a remarkable working life. For the last five years of his tenure he was not able to walk the route so only delivered in his own village, while his son Solberg Henrikson took on the responsibility of the rest of the route and then took over from his father and became the local postman.  The full story is here

The stamp is an engraving by the prolific Czeslaw Slania (1921-2005) of a photograph, which is also the case with the following stamps but I am lucky enough to have both photo and stamp combined on maximum cards 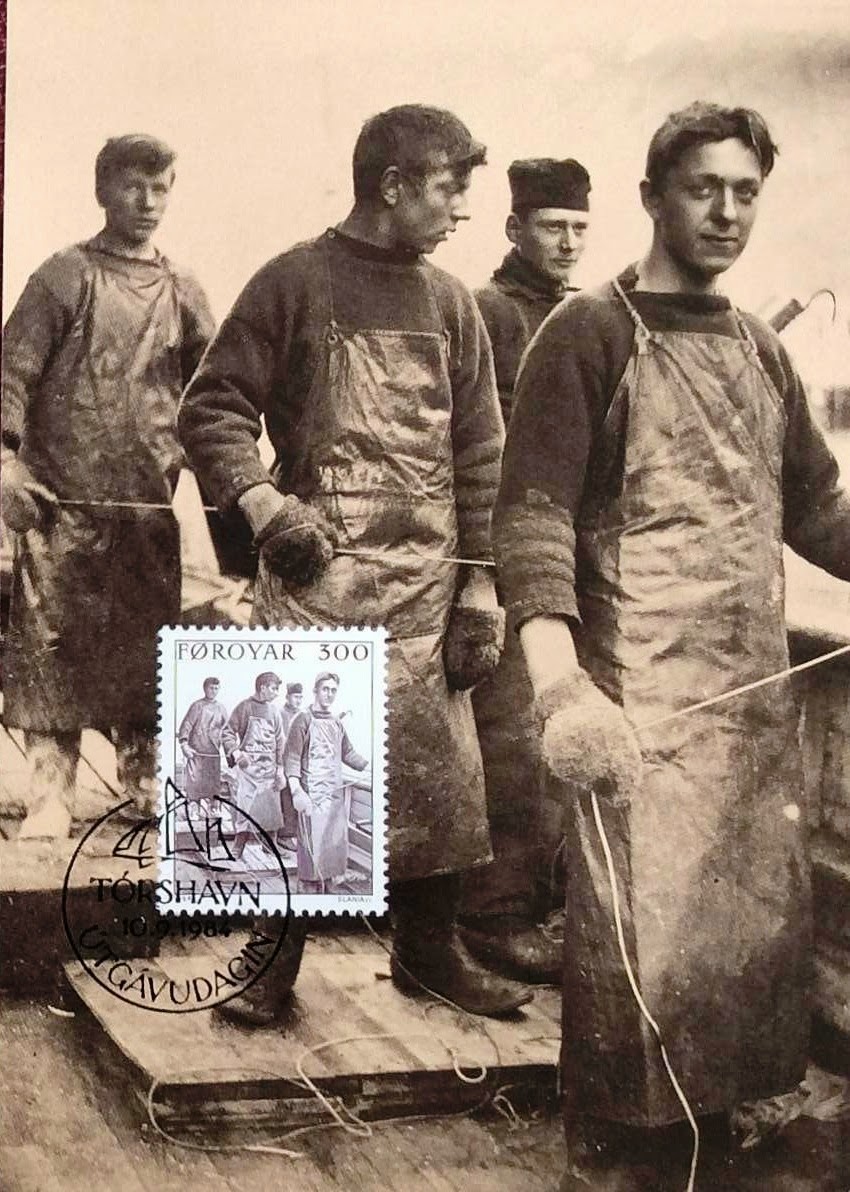 and here are a group of young Faroese fishermen in the north Atlantic. I'm fascinated by the direct look into the camera and also by the gloves.  It appears to be a dry day 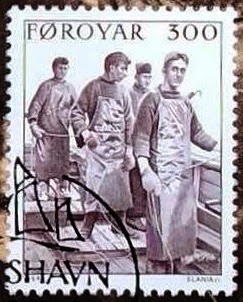 unlike this one which looks to shows a more challenging day  - 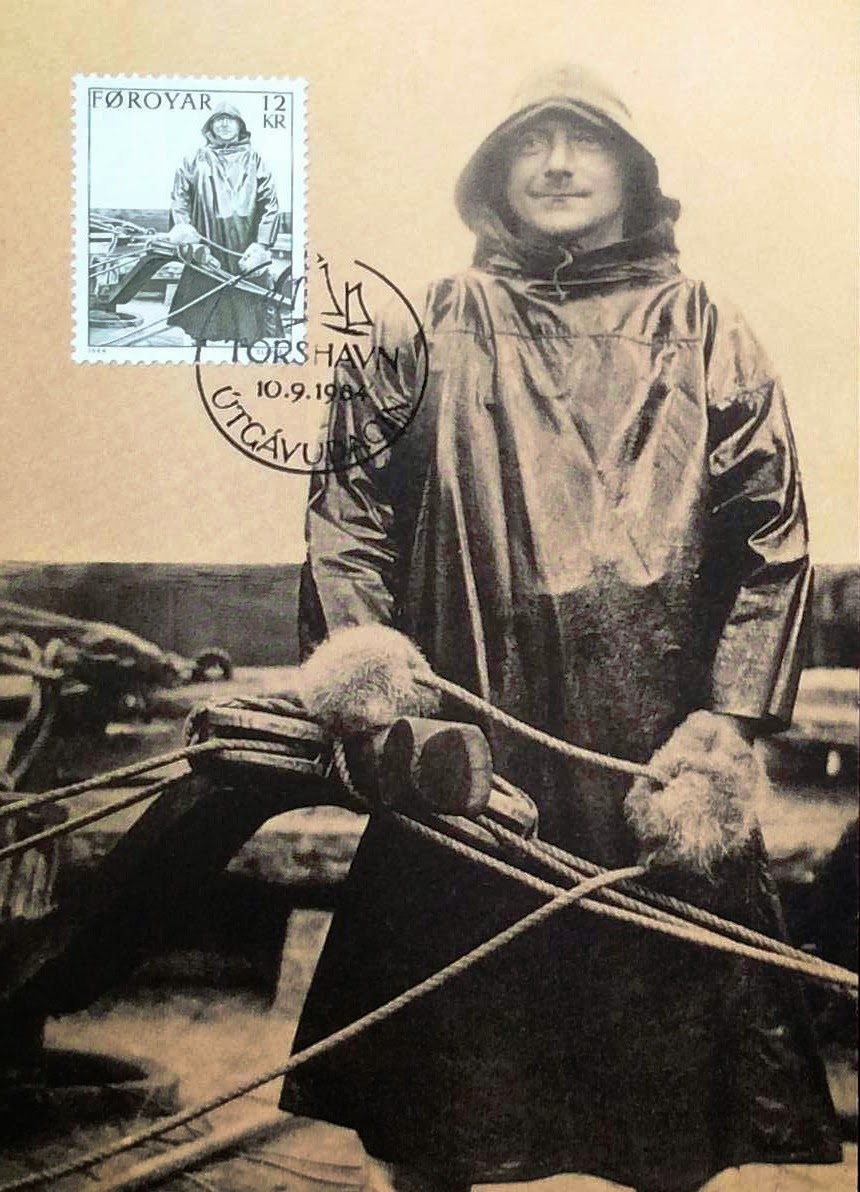 with the steersman at his rudder kitted up with full waterproofs 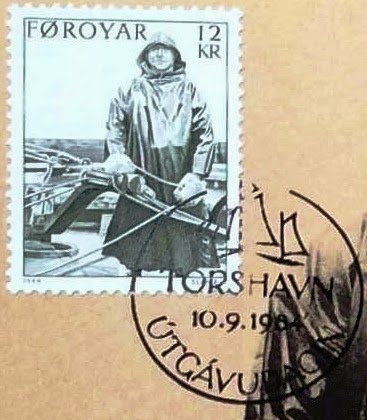 The stamps are a set issued in 1984 called Faroese Pinnaces or just simply, Smacks, but I haven't been able to find out about the date of the photographs themselves.  Is the clue in the stamp that completes the set? 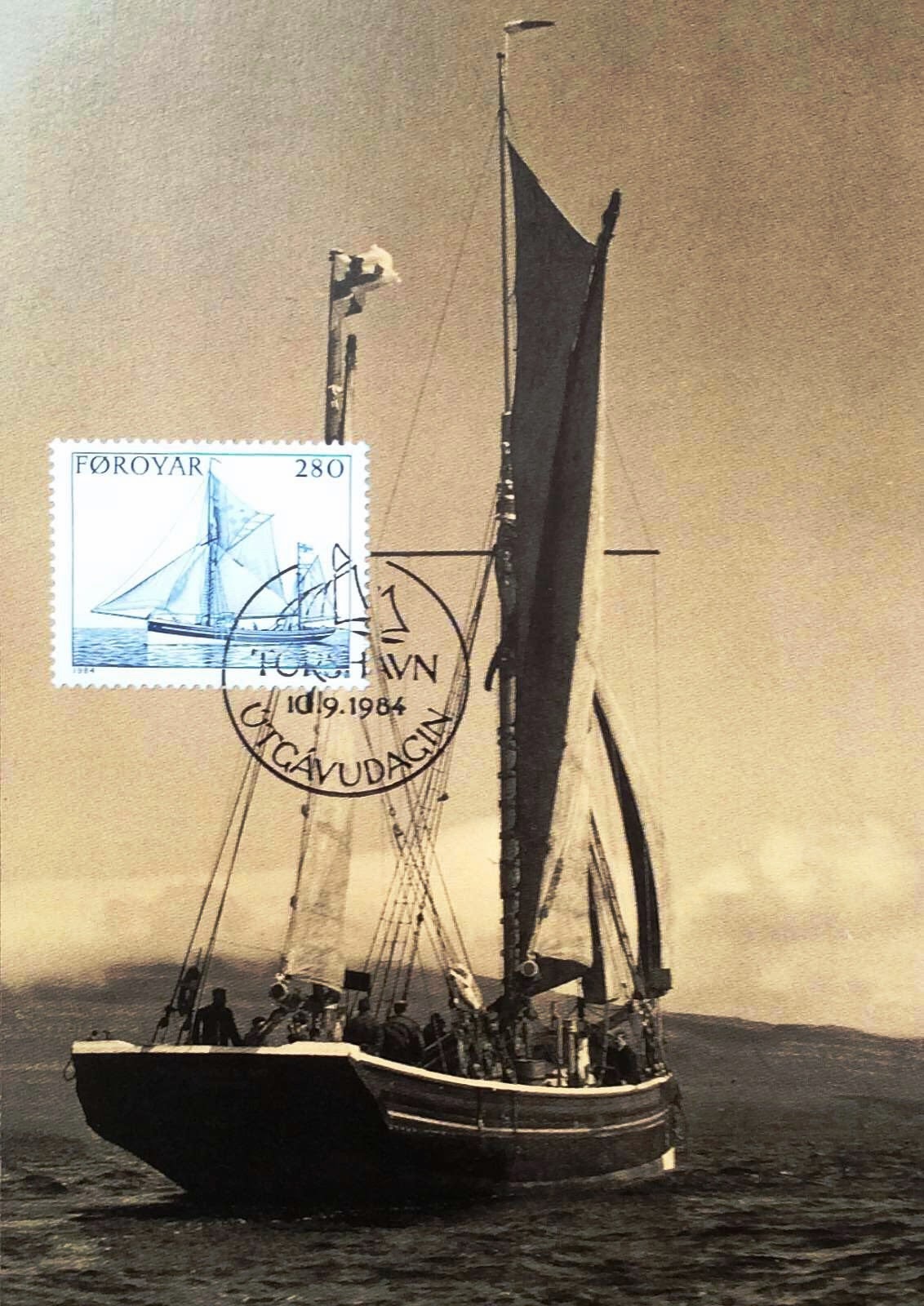 Which shows the 'Westward Ho', a smack which would have a crew of 20, built in 1884 in Grimsby and sold to the Faroe Islands in 1895.  It got an engine in 1920 and continued fishing until 1964. ( During World War 2 it was in the dangerous occupation of bringing its catch to Scotland after fishing off Iceland).  Amazingly it is still in existence being restored in 1968 and then again in 2005 and now appearing at regattas and sea festivals (seen here today in full sail). 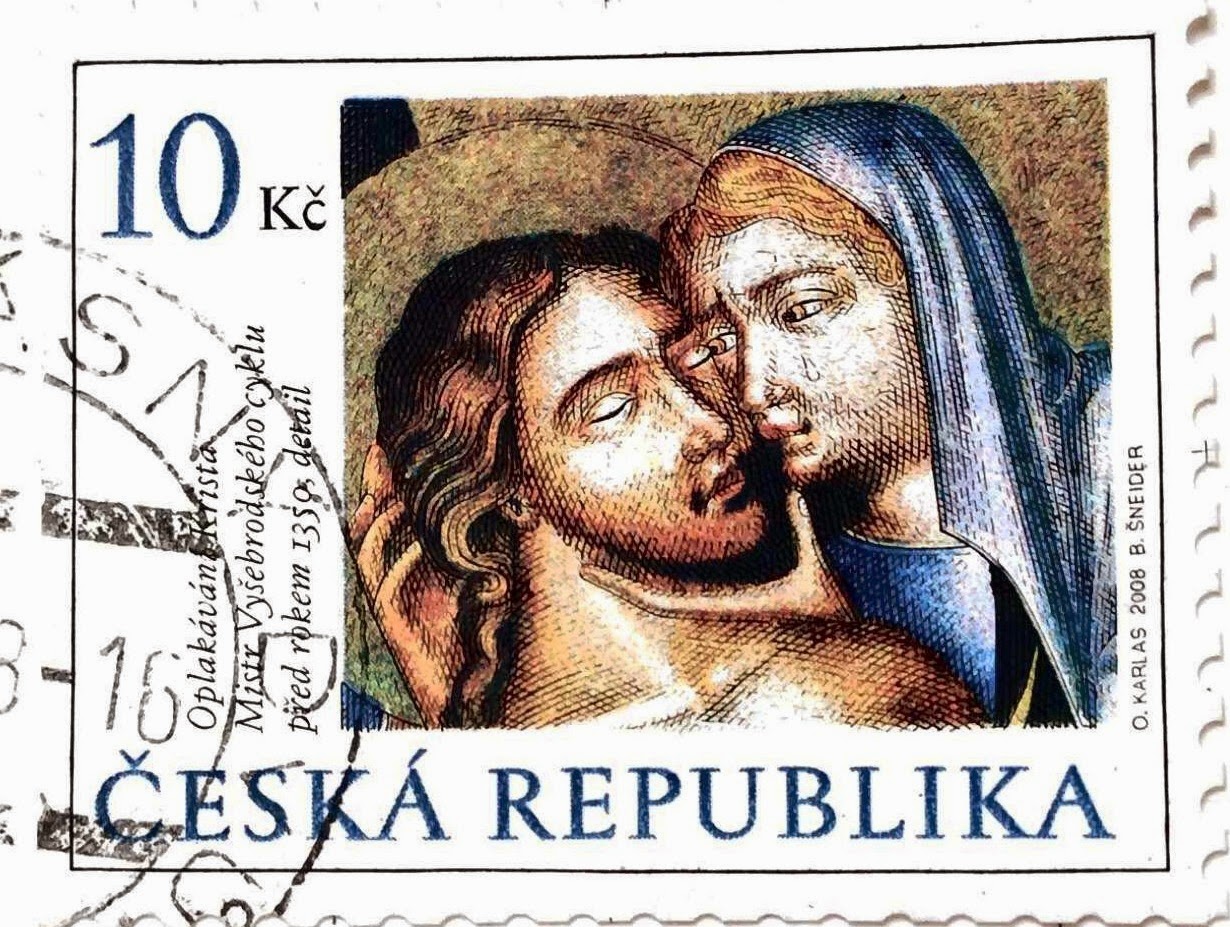 I have a certain lack of Easter stamps but here is one I don't think I've shown on here before issued by the Czech Republic for Easter 2008 of the Pietà, Mary cradling the dead body of Christ.  The stamp portrays a detail from an altar cycle of Christ's life produced by an artist working in Prague in the middle of the 14th century, unknown by name, who is referred to as the Master of Vyšši, one of the treasures of Czech art. 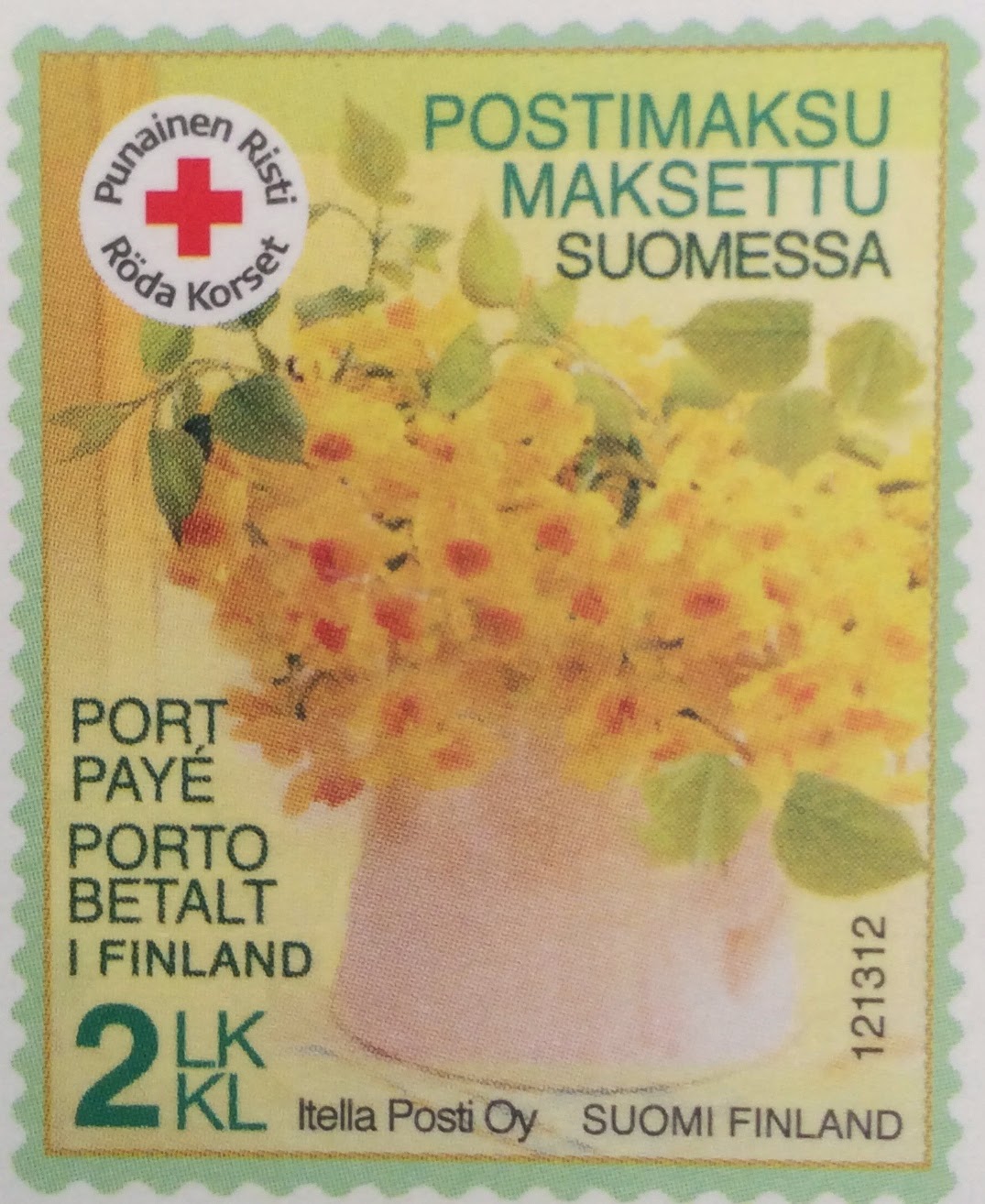 Happily for this theme I received a Happy Easter postcard this week from Eeva with its Finland Red Cross prepaid charity stamp of a beautiful bowl of daffodils. They are in full bloom here, in gardens, by roadsides, in pots, and to top off a golden easter time have been joined by drifts of their later flowering wild ancestors in the woods. 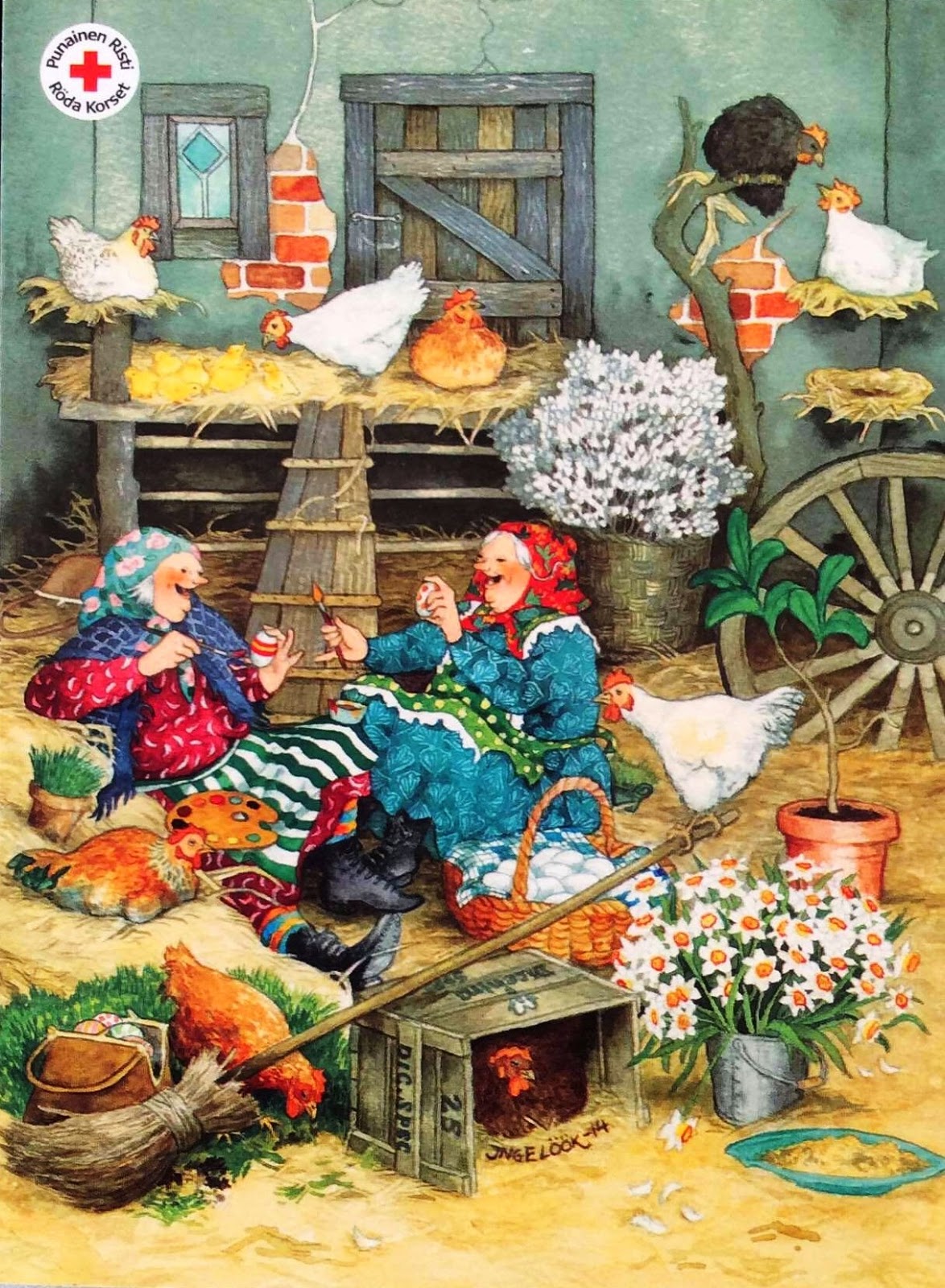 and cosy time in a barn painting hen's eggs for Easter, they are possibly still warm.


Like the card I wish you all Hyää Pääsiäistä - Happy Easter