The court jester Stańczyk lived at the time of the 16th Century Polish Renaissance and here he is attending Queen Bona's ball (seen in the background), but all is not well for he has discovered a letter and the news of the loss of Smolensk to Russia.  The artist, Jan Matejko (1838-1897) was a painter of the history of Poland and this is one of his most famous paintings, a popular exhibit in the National Museum, Warsaw.
A more upbeat Joker, Till Eulenspiegel, a peasant trickster playing pranks and jokes and driving people mad by taking their words literally. The stupid but cunning peasant always outfoxes the narrow dishonesty of townsmen, clergy and nobility. His name translates as 'Owl mirror' and like the original book of his adventures the stamp shows him with both. The stamp illustrates the various objects from his pranks and is designed by the Berlin illustrator Henning Wagenbreth
Its Mr Punch so we know that mayhem is just around the corner, as it is with the other smiling face of Stan Laurel of Laurel and Hardy fame.  These greeting stamps were issued in booklets of ten on various subjects  but sadly they haven't done them for years
and of course the illustrated cardboard covered vending machine stamp booklets have long gone too.  This was the first of a set of 4 booklets issued in 1991 for the 150th anniversary of the satirical and humorous magazine Punch featuring Punch on the cover as drawn by Richard Doyle and on the back a Gerard Hoffnung cartoon.
I'll finish with high japes and the brightly clothed Harlequin as imagined by the prolific Austrian Tyrol illustrator and cartoonist Paul Flora (1922-2009) on the 'Carnival Figures' maximum card. 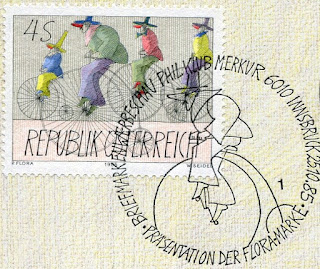 The 'Clowns Riding High Bicycles' with a postmark showing off nicely those delicate peddling pointy feet.
but for the full colourful effect and their red noses here is the stamp alone. The country name is raised and tactile on the stamp which akes me imagine Paul Flora sitting at his drawing board putting the finishing touch to the stamp with a nice scratchy pen nib.

The Sunday Stamps II prompt this week is the letter J - for Jan and  Jester, I'll try to resist jape and joking, oh no I haven't - See It On A Postcard

The UN raised awareness in 2010 with an International Year of Biodiversity, this looks the perfectly balanced ecosystem.  I noticed something important was missing, insects, although it does depends on whether the white cloud on the right is a hot geyser or a cloud of midges.  Iceland has midges and black flies but impressively
no pesky mosquitoes.  It also lacks
butterflies so an Icelander would have to travel to another island to see them. A nice destination would be Herm, a tiny island off the Guernsey coast. The stamp combines a new design with one of Herm's carriage labels on the 50th anniversary of their introduction. The labels paid for the journey from Herm to Guernsey where British stamps were affixed to the letter or package to journey onward (this continued until 1969 when the Guernsey Post office took over control of the post). The stamp shows a Small Heath butterfly while the carriage label shows a Red Admiral and a Painted Lady.  Iceland may have no butterflies but it does have
lots of moths so hours of fun with a moth trap recording them. This Purple Tiger Moth will not be found unless it has hitched a ride from warmer climes.
I stay in Eastern Europe with a Turkish Lacewing and a Bush Cricket which according to the story
sang away all summer while the ant was storing grain and on the stamp winter is coming.

Sunday Stamps II prompt this week is the Letter I - here for Iceland, India, insects, island and international - investigate See It On A Postcard for more
Posted by Joy at 20:21 3 comments:

Its Spring and hares are out in the open looking for a mate and perhaps, if lucky, one might see a hare like this but make a motion and its off at high speed.  Like the hare I'm speeding but through the year to harvest time
and the wheat fields of Hungary.  Ödön Tull (1870-1911) had won a Hungarian stamp design competition in 1909 which resulted in the issue of what is considered today a classic stamp unfortunately by the time of the first issue Tull had died. I leave the pastoral scene and journey to
the Canadian prairies as a combined harvester reaping and threshing the wheat speeds up the harvesting process considerably.
I like this Hungarian airmail set which combines fields, factories and transport (see here) so I'll thrown in a tractor as well as a combined harvester.
not forgetting the tractor drivers
this chap even has time to smoke his pipe. The mighty machine is a steam tractor from 1917 and in the distance can be seen a sight more common in 1917 of a horse drawn plow
you cannot operate that sitting down.
although it looks as though neither can you on this combined harvester working in a rice field. After all this work a refreshing cold beer might be on the menu perhaps made from hops from one of the world's major growers, Germany.
Here they are harvesting the hops, today of course there is a machine that does this but not as scenically as the workers on the stamp. 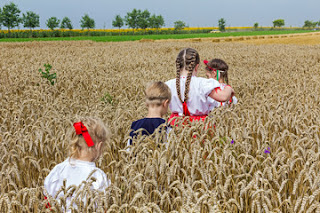 The Sunday Stamps prompt this week is the Letter H - here for Hungary, Harvest, Hare, Horses and Hops - hare over for more at See It On A Postcard

Germany has had a long history of issuing Humanitarian Relief stamps to support social welfare starting in 1929 however the series of stamps which were first issued in 1959 broke with their traditional subjects in an attempt to appeal to children and  featured the tales of the Brothers Grimm.  The series would be issued for nine years so I'm jumping in with two from the 1961 Hansel and Gretel set. We have the brother and sister with the cannibalistic witch luring them in to her gingerbread house and then Hansel trapped in the witches cage.
I don't have any full sets and usually just the middle stamps (somehow the low and high value have eluded me) so no beginning or end for these stories perhaps stuck in the middle of a perpetual fairy tale, not always a safe place to be. Glad to see Snow White is bringing hot drinks for the cute dwarfs alas while they were away later she then has been tempted to taken a bite from a poisoned apple.  The artist Holger Börnsen (b1931) won Deutsche Bunderspost's stamp competition and would produce a run of the Grimm stamps
The mother goat is warning her kids not to open the door while she is away however the wolf has tricked his way in with the ruse of a white floury hand, fooling them to think it was mother goat.
Down to just one stamp of this set and Sleeping Beauty about to prick her finger and go to sleep for a hundred years.
A change of artist in 1965 brought in György Stefula (1913-1999) and Cinderella feeding the birds who bring her the ball dress and then the prince offering her the slipper.  The original Grimm collected story is indeed rather bloodily grim when the step sisters try to fit their feet in the slipper
Lastly here is the Princess and the Frog meeting and dining until he is kissed and becomes the handsome prince. The Brothers Jacob and Wilhelm Grimm collected stories from the oral tradition that had been around for hundreds of years and wrote them down, publishing the first collection of 86 tales in 1812 but it had grown to 211 stories by the time of the 1857 edition. 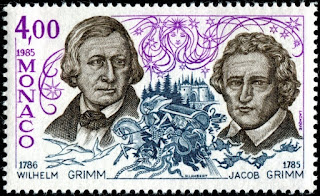