The Omani dagger or khanjar not only appears on stamps of Oman but also their banknotes, is part of the national flag and printed on all official documents.  It is worn on ceremonial occasions and can be made of gold, silver, copper or brass. One has to be wealthy opt for the gold and silver and the time it can take to make can vary from a few weeks to several months depending on the material used.  An ornate national symbol.
Of course if one wanted to see something really ornate then the era to turn to would be the baroque and above is the largest surviving baroque organ in northern Europe which can be heard every Sunday in St James Church, Hamburg making full use of its 3000 pipes and 60 registers.
Post office signs were just as ornate. This one is owned by the Museum for Post and Communication (the renamed National Postal Museum) in  Frankfurt am Main,  The museum gets rave reviews on Trip Advisor.
The stamp like the card shows a Post House sign of the Royal Prussian Establishment for Transport. At the time the different post house companies delivered mail to specific countries and a register was available to look up where to hand over ones post for the different destinations. How much easier it is today to just pop a letter in
a postbox.  This is a Belgian pillar box from 1852. The old Belgium pillar boxes are among my favourites although the earliest I've seen is this one.

The Sunday Stamps II prompt this week is the letter O - here for Oman, Ornate and Organ - more Os over at See It On A Postcard

The insert card for this FDC says "Blå Junfrun is the most legendary of our national parks.  Seen from the mainand or Oland it is like a bewitching dome with the highest point 86m above sea level. Blå Junfrun became a national park in 1936."   It doesn't tell the full story for this blue granite dome is said to be home to witches and has a mystical stone labyrinth, its name translates into English as The Blue Maiden. 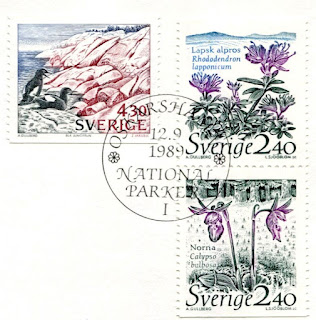 and the stamps show the black guillemots  which live on the island and next to them Rhododendron Iapponicum, the only Swedish rhododendron species and below that the fairy slipper orchid (Caypso bulbosa) which grows in the damp mossy forests of Sweden.

The Swedish naturalist Carl Linnaeus visited Blå Junfrun as he travelled through Sweden classifying flora and fauna
and one of the birds he classified is seen here flying over water on a Norwegian stamp, the Eurasian Hobby (Falco subbuteo),
Staying with another sea facing national park here is the Wadden Sea where the coastline spreads across three countries (Denmark, Netherlands and Germany) each with their own national park, the Danish National Park is the smallest.  The miniature sheet features a Texel sheep and a black tailed godwit roaming the tidal flats and wetlands with a group of harbour seals taking their ease by the shallow waters.
More water but this time a peaceful Finnish lake in the Nuuksio National Park.
Water on the move powering through the Senyru-kyo Narrows, Shiobara in the Nikko National Park.  Shiobara is famous for its hot springs, mountain streams, waterfalls and the beauty of its autumn colours.  The early Japanese national parks stamps were all monochrome so we don't get to see those autumn colours but maybe imagine that the misty steam from the hot springs is obscuring our view.

Sunday Stamps II prompt this week is the Letter N - here for National Parks, Nature, Norway, Nuuksio, Nikko and Nippon - visit  See It On A Postcard 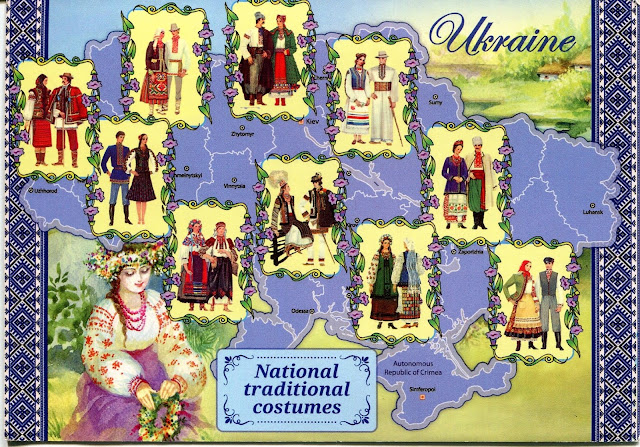 So which part of Ukraine would you like to wear a traditional costume from?  As I like green I might pick the one at the top which would also mean I get to wear those neat red boots.  The evocative flower garland also makes an appearance and always brings to my mind long summer days.  Marina, the sender of the card, lives in the south of Ukraine in Melitopol so I guess she gets to wear the green jacket and red headscarf on the bottom right.

The flower that weaves its way through the country map I think is supposed to be a mallow which for Ukrainians symbolises love of home and the nation and can be often seen on decorative embroidery and folk costumes. According to legend it is considered to give protection and for that reason can be found growing and guarding the front of many Ukrainian homes.

Postcards for the Weekend theme - Costumes - dress to impress at Connections to the World
Posted by Joy at 21:29 2 comments:

Some things instantly say the Isle of Man, one is the triskelion or Thee Legs of Man, the island's symbol for thousands of years. When Emma Cooke moved from Aberdeen to the Isle of Man in the year 2000 she also was fascinated by the emblem that appears in all different contexts throughout the island and in an ongoing project started to photograph them. The stamp features one of the photographs from the hundreds she has taken.

The other image that springs to my mind are the Manx TT Races and the motorbikes
zooming around the island here shown with the Red Arrow Display team flying overhead.  This is a stamp from a rather attractive booklet they issued featuring a year of events complete with descriptions on the selvedge and caption stickers to put on your postcards.
As you can imagine stamp issues featuring motorbikes make a regular appearance on Isle of Man stamps.  This is one of the earliest (although not the first) after Manx postal independence in 1973.  It features Freddy Frith in 1937 when he set the first 90 mph plus lap of the Snaefell Mountain Course.   One of the most famous and greatest racers, Mike Hailwood, also features on this set but as I don't have that one then
here the artist shows him in 1961 when he became the first man to win three races in one week in different categories, it was a good year for him because he also won the 250cc World Championships.
Some people who rode the roads around the island throughout the year were the GPO telegram delivery boys on their BSA Bantams. I could have said zoomed around the island except  that would have been an exaggeration because the three-speed gearboxes were governed to restrict their top speed. 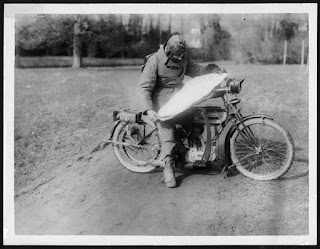 A letter is on a journey.  This particular one is dated 1857 which was the year British postage stamps were first used in Gibraltar after the merging of the maritime Packet Agency and Overland Post. The stamps are cancelled with Gibraltar's letter G.

The letter may arrive at its country of destination in
large overflowing bags.  It will then have to be
sorted. I can't make up my mind whether this is inside a sorting office or it is a travelling post office.  But if it is on board a train then the  central station of the city Winterthur on the cancel is one of the busiest on the Swiss Railway Network.

to Zurich.  This is Globi the well travelled blue parrot created by Robert Lips (1912-1975) and 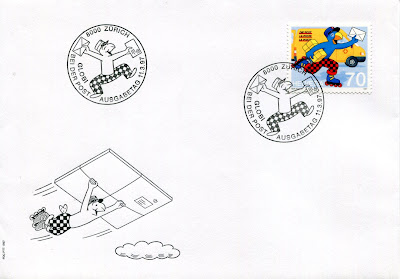 you can tell its always an adventure for Globi for he has exchanged his normal black beret for a postman's hat.
In more sedate times the personal touch. The stamp commemorates a part of postal history when a mail station was opened in Balzers on 1 September 1817 and its operation entrusted to Austria.  Before 1912 the stamps of Austria were used in Liechtenstein (marked KK Österr.) but after the war and post-war inflation Liechtenstein finished the arrangement in 1920. 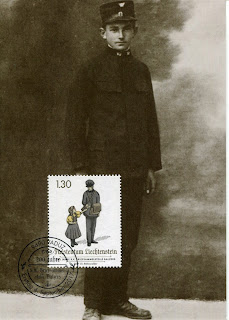 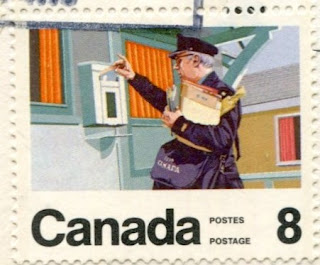 And who does not love the thunk of mail coming through the letter box and for me associated with an excited squeal and running feet, hopefully not to be disappointed with junk mail and bills and a disappointed - meh.  All this set of Canadian stamps have the year of issue hidden in the stamp, this one can be seen on the package he is carrying.  The Canadian mail handler (2nd stamp down) has a date on the ceiling to his right.  For the others of the set and their hidden numbers (and to save you squinting) click on the stamps here 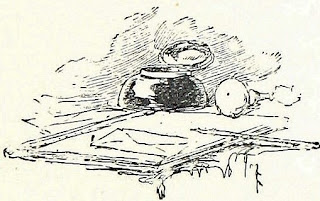