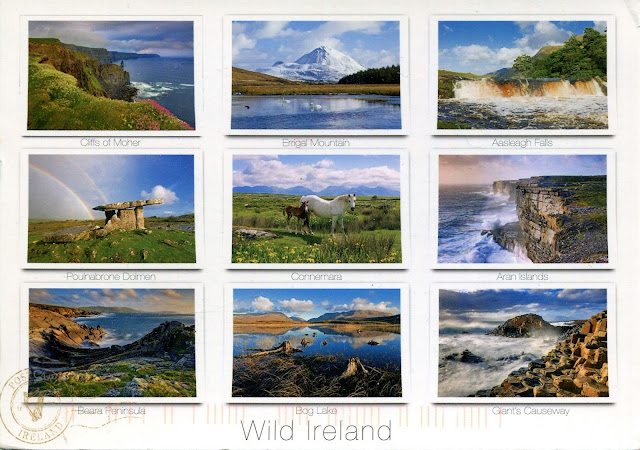 This card makes me want to jump on a ferry and travel, perfect blue skies and a trip into wild Ireland what could get better.  The card came from Emma who lives in the south east of Ireland which is nowhere near any of the counties in the photographs but she will only be a car drive away to get out and about.

Postcards for the Weekend theme - Touristic Multi-View Cards - travel at Connections to the World
Posted by Joy at 15:24 6 comments:


Hungary is a horse loving nation and horses make a lot of appearances on their stamps. Here is András Balczó leaping into view in the show jumping and winning the Modern Pentathlon gold medal at the Munich Olympic games.
Of course the stage coach with galloping horses was a popular subject for a lot of countries in UPU's centenary year.
More white horse of the same decade make an appearance pulling an  Omnibus of 1870.

The major horse racing venue is Budapest's Kincsem Park named after a legendary racehorse that won every race (54). Kincsem means My Precious or My Treasure. I don't know if she appeared on any of Hungary's stamps but racehorses certainly do
A few from the set designed by Adam Czilényi (1909-1998) which have been described as like a motion picture. A prolific graphic designer he produced 250 stamps for Hungary alone and over 1000 overall. 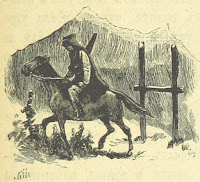 Sunday Stamps II has drawn up at the letter H - here for Horses, Hungary and Health - gallop over to See It On A Postcard for more
Posted by Joy at 13:40 10 comments: 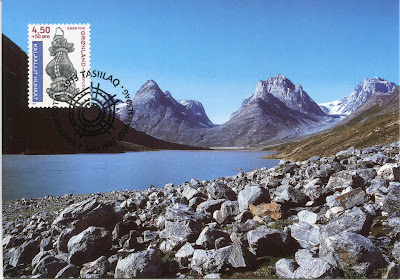 The Ammassalik Fjord on the east coast of Greenland, 60 miles south of the arctic circle. The view is of Solporten which translates as the Sun's Gate, a name which makes me think of ancient myths or sagas.  I wonder if the name means that the rising sun shines through the gap which would be an awe inspiring sight.
Can you guess what object the stamp depicts?  I would never have got the answer but it is an old pincushion which I think is the 'must have' object when sewing the intricate Greenland traditional costume.  The postal cancel is from Tasiilaq which with 2,017 inhabitants is the largest community in the area, perhaps the pincushion originally came from there (I have no information).

The massive shifts of plate tectonics when the continents were forming gave an uplift to Eastern Greenland taking it 3 kilometers above sea level and moving it north and into its now icy climate.  In geological terms the east of Greenland is younger than the west coming in at 70 million years which means the soaring peaks have had less erosion than those in western Greenland.  This takes us to
the geophysics of earth which is such an interdisciplinary subject that the stamps of the International Geophysical Year were equally varied. This one featured the first artificial satellite, Sputnik 1, and its launch date of 4 October 1957.  Time to return from space to the green fields of earth
and land in the  Channel Islands where if one is lucky we might see a Golden Guernsey Goat, a rare species.  Lets look out for some birds
a Grey Heron flies over the tree tops or perhaps takes off from its nest on this East German stamp
A Great Cormorant survey the water and what lies beneath. 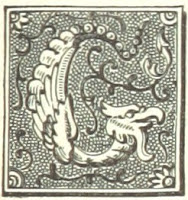 Sunday Stamps II is featuring the letter G - here for Greenland, Geophysics, Guernsey, Goat and Germany - go to See It On A Postcard. 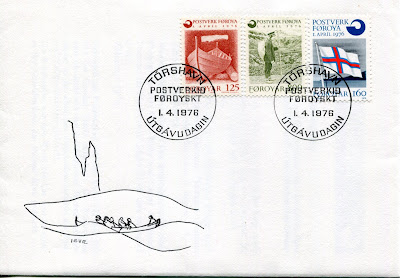 Lets take a trip to the Faroe Islands and ride the waves with the rowers in that cute but somehow perilous drawing on the FDC. Three stamps were issued on 1st April 1976 to commemorate the establishment of an independent Faroese postal service. 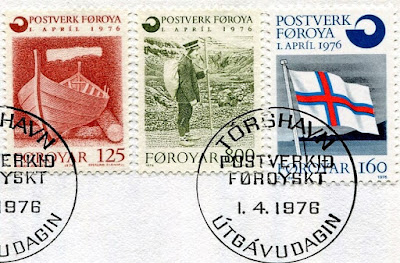 Of course the iconic Faroese rowing boat features on a stamp (from a drawing by Fridtjof Joensen).  The middle stamp features the Faroese Postman who carried the post for 60 years (who I have written about before here) and lastly The Faroese flag from a drawing by Zakarias Heinesen.  The engravings of the 125 and 800 øre stamps are by Czeslaw Slania.  The breeze is fluttering another flag
In 1984 Åland obtained the right to have its name on the stamps and one of the designs chosen in collaboration with Finland was of the archipelago's flag. For a short period both Finland and  Åland stamps could be mixed for postage.
This year is a big year in Finland's history for they celebrate a hundred years of independence and one of the first stamps they issued was of their flag. The illustrator is Ossi Hiekkala who also designed the FDC.  The magnificent whooper swan is the national bird of Finland so as well as flying in formation over the envelope one

also swoops over the postmark. 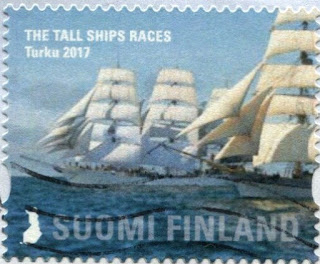 The centenary was also celebrated in the city of Turku with the Tall Ships Races in July when record crowds turned out (over half a million).  One might need some peace and quiet after that
This is one of a set of three stamps depicting calm and tranquillity chosen by the graphic designer Stiina Hovi showing the water seasons in Finland.  What better way to portray the land of a thousand lakes. 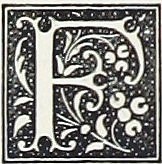 An entry to Sunday Stamps II which features the Letter F - for Faroe Islands, Finland and Flags - find more on See It On A Postcard 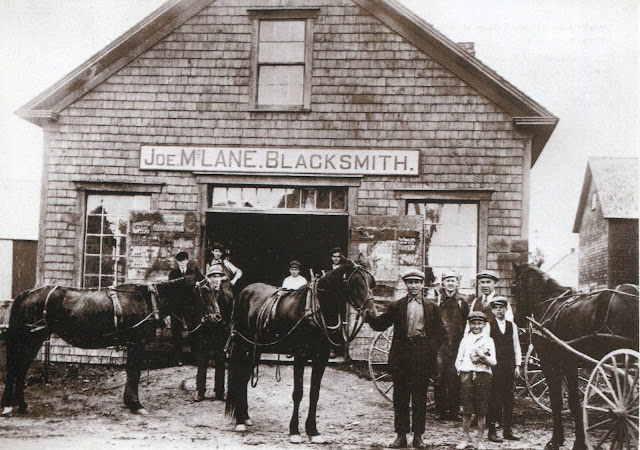 The postcard says on the back "This blacksmith's shop shown here circa 1910, has always been an important focus for community life in Sherbrooke".  The village is on the eastern shore of Nova Scotia by the St Mary River and indeed the blacksmiths shop is still there but as part of the Sherbrooke Living Museum which is open during the summer months.  If you have ever had a yen to be a blacksmith then the resident blacksmith runs training courses.

The postcard of course shows a working blacksmith and the gathered crowd, the blacksmiths leaning against the door opening. I especially like the bare footed boy at the front with his shoes in his hand, has he photo bombed the scene or is he the horse holders son who had gone for a paddle in the river while the horse was shod?  The sociable nature of the Joe McLane's shop is mentioned in 'The History of Sherbrooke Village' which says:-

"His shop was a modest size square building, about 22' wide, with a coal burning forge.  The McLane Blacksmith Shop was a busy but sociable place in those days. A fresh bucket of water hung by the door and people could help themselves, and then stop for a chat. The makings of farm implements,carts, plows, tools, chains, sled runners, as well as shoeing horses were all part of the work done by the blacksmith".

Postcards for the Weekend theme - Monochrome -  Connections to the World
Posted by Joy at 00:32 2 comments:

Equatorial Guinea joined the Universal Postal Union in 1970, just in time to celebrate its 100th anniversary in 1974.  Their stamp set featured a romantic idea of carrying post with horses, canoes, llamas, sledges, mountain climbing and of course camels with a large 'correos' bag.
Estonia Post kept it real with horse power for the Europa theme of 2013.  The FDC features a 1960 mail lorry built by Tartu Utode Remondi, a company which operated from 1949-1997 in various guises. In 1960 it operated under the name Tartu Automobile Service Factory Number 3, nothing says Soviet more with a name like that.  The mail lorry seems to be based on the company's GAZ51, a 23 seater bus,  which they manufactured in various other guises such as bread lorries, and mobile workshops for people like hairdressers and shoemakers travelling around rural districts. 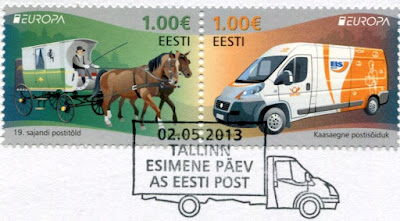 The stamps show a government stage coach dating from 1840 and one of today's modern vans. I think there is a piece of whimsy on the stamp as the titles seem to say old stage coach and modern stagecoach.  The span of time on the stamps would fit nicely into the existence the Estonian History Museum which celebrated its 150th Anniversary in 2014 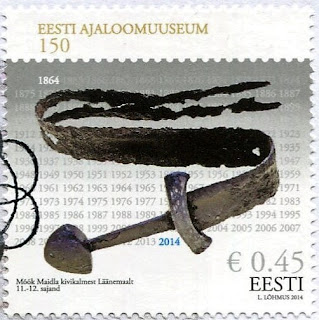 I like the years rolling by on the stamp background.  The sword was found as part of some excavated grave goods and is dated to the 11th-12th Century. The stamp sheets have have little artifacts from the museum on the selvedges which I do not own but I have the next best thing
this FDC showing an entrance ticket from 1907 and a display of objects from the Estonian History Museum.  The designer is Lembit Lõhmus,  known both for his work on many stamps and also engraved bookplates. His design of a silhouetted map of Estonia which features on the Estonian euro coin was chosen to be used after a popular vote in a national poll. 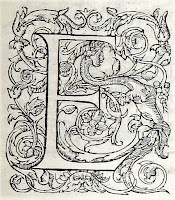 Sunday Stamps II this week has arrived at the letter E - for Equatorial Guinea, Estonia and Europa - exit to See It On A Postcard.