Lift Off to the Red Planet 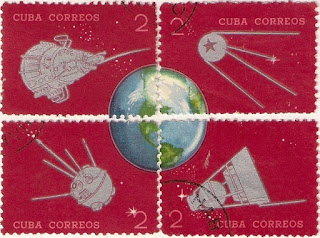 Cuba celebrated the 25th anniversary of the Cuban Postal Rocket Experiment with various rockets and satellites stamp sheets in 1964. These are four stamps which originally would have made up a corner of the sheet, as you see these are franked so no longer part of a sheet. I think they portray different versions of Sputnik.  I know the one on the top left is Sputnik 3 because there is a Sputnik 3 enthusiast out there in cyberspace who has listed all the stamps featuring it.   The one on the top right is the distinctive shape of  Sputnik 1, the first artificial satellite in history launched in 1957 by the USSR, it was polished to a high sheen to enable it to be tracked by telescope and was enthusiastically tracked by both radio and visual amateur astronomers around the world.

I show these stamps because they depict  our home planet with the satellites beeping their way around it, oh and it has a red background. Wondering about the Postal Rocket?  It was an experiment by the Cuban constructor Antonio Funes and Dr Tomas A Terry, president of the Cuban National Philatelic Club in 1939.  The latter was the driving force and the rockets carried first day covers but being propelled by gunpowder and also being unstable they did not produce practical results.  What a shame, just think of all the traffic that would have been kept off the road, I can just imagine giant rockets flying from post office to post office however
perhaps this rocket is just a little smaller than I imagined. There is one of the original rockets on display in the Cuban Postal Museum. 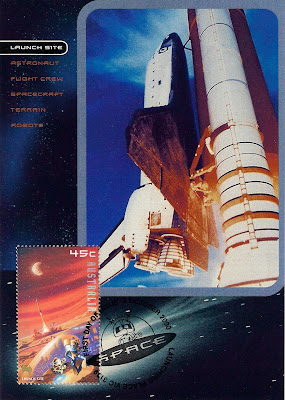 Oh yes lets show a proper NASA rocket with the space shuttle attached ready to launch. This Maxi card stamp shows a launch site on Mars with the space shuttle taking off while in the foreground a surveyor works with his robot assistant. The stamp is part of the miniature sheet "Exploration of Mars" for Australia's Stamp Collecting Month in October 2000.
What else could they publicise this with but "Stamp Collecting is Out of This World".  I'll agree with that as we visit the red planet.  The sheet shows a colony situated inside Olympus Mons, a 24 km high volcano, the rim of which is in the background as well as Mars' two moons Phobos and Deimos.

The stamps starting on the left show 1) an astronaut making a free fall entry from a cruise ship above her. She controls her descent using a personal thruster. 2) Skimmer craft leaving the cruise-ship 3) Flight crew are escorting two remote controlled cargo skimmer vessels 4) launch site as the maxi card 5) Terrain stamp shows two domed cities with a reservoir between with water being piped from Mars north pole and lastly on the far right 6) robots cleaning the kelp rods. The rods are filled with kelp and algae which is adding oxygen to the atmosphere. The rods are flexible so they can withstand the high winds on Mars.

I like the concept of this sheet showing what can be imagined and known at this point in time. Mars is not a very hospitable place, besides the cold (an average of  -65 degrees Celsius or -85 Fahrenheit) the surface receives high levels of radiation.  It is imagined colonist would either use caves or the geodesic domes shown on the stamp sheet.  In the long term Mars could be terraformed to become an Earth like planet perhaps by releasing carbon dioxide locked under the polar caps by heating it with orbital mirrors.  This would liberate water to fall as rain and raise the atmospheric pressure, eventually allowing microbes and plants to grow.


"Mars is there, waiting to be reached" Buzz Aldrin (astronaut) 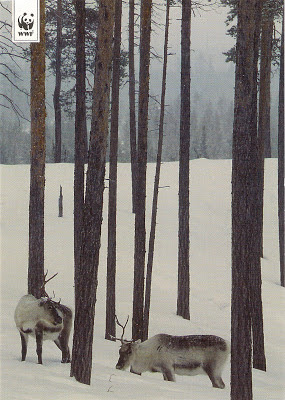 I always love the muffled sound of snow in the forest and can just imagine these reindeer padding through it, looks like they are eating their winter diet of lichen.  It is a very atmospheric postcard.  If you like snow apparently the best time to go to here (Finland) is late February or early March when there is much sunshine, its not so cold and snow is guaranteed.  Reindeer (Rangifer tarandus) are called in Finnish Poro.  It is thought that they are the only mammal that can see ultraviolet light which helps them survive in the winter by being able to see objects in sharp contrast.
Posted by Joy at 11:45 1 comment:

Year of the Snake 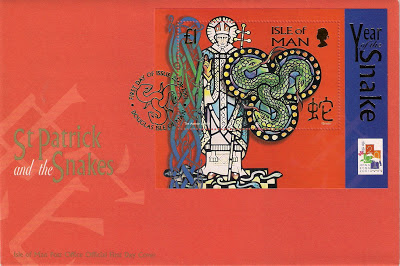 Take a trip back in time to 2001 when it too was the Year of the Snake (I haven't got anything for 2013, yet).  The Isle of Man combined its issue of this miniature sheet with the Hong Kong Stamp Exhibition (its logo is shown on the right). The theme is of St Patrick  banishing snakes and venomous reptiles from Ireland, apparently he did  the same for the Isle of Man, what a busy time he had.

There were arguments as to who owned the Isle of Man, England or Ireland, a strong claim was made for Ireland based on the absence of snakes.  The counter claim was that if you brought a snake to the island it would not die therefore it must belong to England.  Today it is a self governing British Crown Dependency 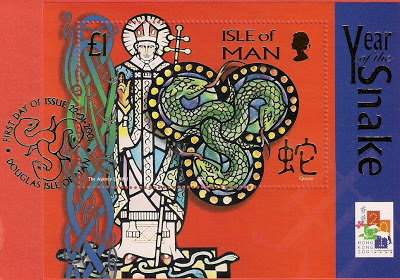 As one of the six Celtic Nations the sheet design beautifully reflects that heritage. I like how the first day cancel echoes the snake design.

2013 is the year of the Black Snake, enigmatic and intuitive.  Black is the colour of space, night and the colour of deep water.
And indeed the year is that of the Black Water Snake, here is the real thing a River Snake. The year will be full of unexpected changes and instability.  Having said that the year is considered lucky because it is thought the snake has some resemblance to a dragon. Speaking of which I always enjoyed the television series of 'The Water Margin'  that followed the adventures of outlaws in the Sung Dynasty.  It always began with  a philosophical adage, one of the most memorable was:


"Do not despise the snake for having no horns,for who is to say it will not become a dragon?"" 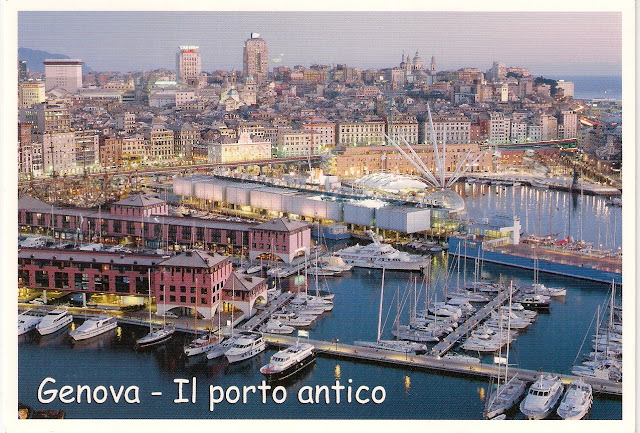 The old harbour (Il porto antico) in Genoa. The old port was redeveloped, restoring historic buildings including the old cotton warehouses. It is a familiar story from all over the world bringing back to life areas that once were large trading ports, but time and trade changed with containerisation and different trading routes.  These old warehouses covert so well and who does not like a waterfront.  This is now a popular tourist centre where you can stroll along the harbour, visit museums, restaurants and bars.

I tried to find out what the spiky thing was and from the little I found it appears that they are old cranes from ships, the base is in the water with a circular panoramic lift.

Clare and Al had been to the aquarium which is one of Europe's largest and also the Maritime Museum.  It would be like a home from home because they live near those two attraction in England too.  Genoa has been described as "decayed glory" which makes it so interesting and pretty. The port is described as having some funky avant-garde architecture.  Sounds the perfect mix of old and new, especially in that wonderful Italian sun. 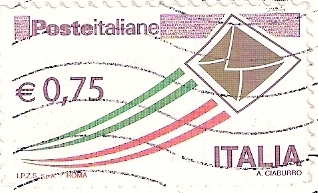 one of the Poste Italiane definitive stamps, the 0.75 being first issued in 2011.  I love the design of the envelope swooping into the air with the Italian colours in its wake. As can be seen the stamp designer is credited on the stamp and is Antonio Ciaburro (1951-)Italian artist and engraver who has designed and engraved over a 100 stamps for Italy, the Vatican and San Marino.

Giantiops Destructor is smiling for the camera. Even in real life and not under the microscope this ant has massive eyes. It can be found in the Amazon jungle along with another 1000 species of ant. If you are thinking of visiting;  here are some other species your may find. Despite its rather bold name this ant does not sting and is described as "skittish and timid".

The stamp celebrates the Wildscreen at Bristol, the museum to the BBC's Natural History Unit (whose films have been entertaining and amazing us for decades).  It has an IMAX screen, electronic zoo and a place where this little fellow would be at home, the tropical house.   With large digital and wildlife archives it has been called a "modern day Noah's Ark"

For many centuries the ant has been a symbol of thrift and industry. The Greek's have used it on this stamp
to commemorate the 50th Anniversary of the Post Office Savings Bank.  The stamp was issued in 1965 so at the present time it has been going for over a hundred years, but with a name change -  TT Hellenic Postbank. It would seem that they have used the ant as a symbol for some times as this old poster shows one  rolling a drachma

Are you ready for another close up? 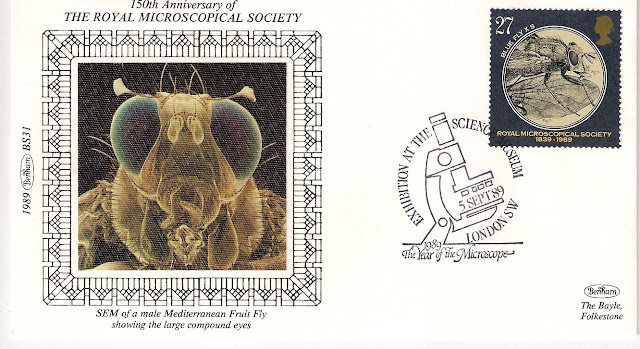 This first day cover stamp shows a blow fly (Caliphora erythiocephala) with their shiny metallic cases they are often called by their colour such as bluebottle.  Somehow I think that the other stamps in this set commemorating the Royal Microscopical Society such as a pretty snowflake may have more attraction.  On the other hand I do like the use of the Fruit Fly as the cover photo because scientists having been using this species for a hundred years to understand genetics and evolution.

I think I'm ready for something prettier 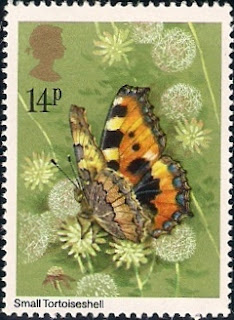 I would love to see those wings under an electron microscope but am quite content  to anticipate the joy of seeing the first butterfly of the year.

Lastly England's rarest beetle, its decline is attributed to the the reduction of coppicing in woodland but the Hazel Pot Beetle is reported to be making a comeback.

25% of all species in the world are beetles and 40% of insects are beetles, it is estimated that there are at least million different types, some have put it higher. One of my favourite stories is of the great biologist JBS Haldane (1892-1964) who when asked by some theologians what could be inferred about the mind of the Creator from the works of his creation replied "An inordinate fondness for beetles".

An entry to Viridian Postcard's Sunday Stamps theme of - INSECTS