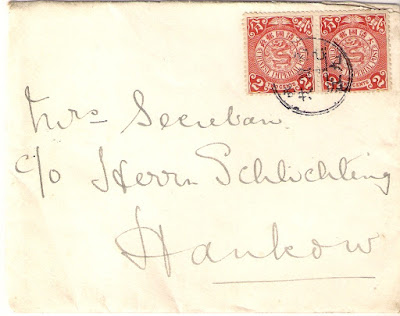 A very long time ago I used to collect Chinese stamps quite seriously but then as often happens life intervened and I stopped collecting stamps of any type. Only when we entered the 21st Century with more leisure time have returned to my love of stamps but with a slight bias towards Scandinavia and the islands of Britain but really there is no plan, as you might guess from this blog. I still have an affection for Chinese stamps but my collection is more or less how I left it all those years ago.  I've dived into its pages for this week's theme. The cover above, although plain, is one of my favourites just for the romance of postal travel and the point in history it captures.  The cancel is dated 28th December 1905 and the native cancellations have the characters for Kiangsi the province in the top segment and Kuikiang (today called Jiujiang) the town in the bottom. 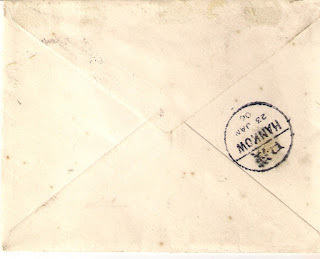 The reverse of the envelope has the arrival markings of 23rd January 1906 (26 days in transit) as it reached it destination of Hangkow.  The Treaty Port of Kuikiang was on the south side of the Lower Yangtze River, about 450 miles from Shanghai and the Treaty Port of Hankow was higher up the river about 600 miles from Shanghai. The major powers owned enclaves in China at this time and from the addressees it looks as though this was going to the German concession located in 100 acres of Hankow.   For an illustrated history of the Treaty Ports see here  (it uses the famous cartoon of the western powers dividing up China), 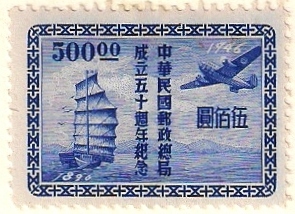 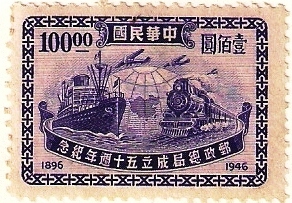 although today the journey could be made by train and a traveller would enjoy a four and half hours trip.


An entry to Sunday Stamps II theme - "Your Favourite Choice" at See It On A Postcard
Posted by Joy at 10:08 3 comments:

Under the Christmas Tree 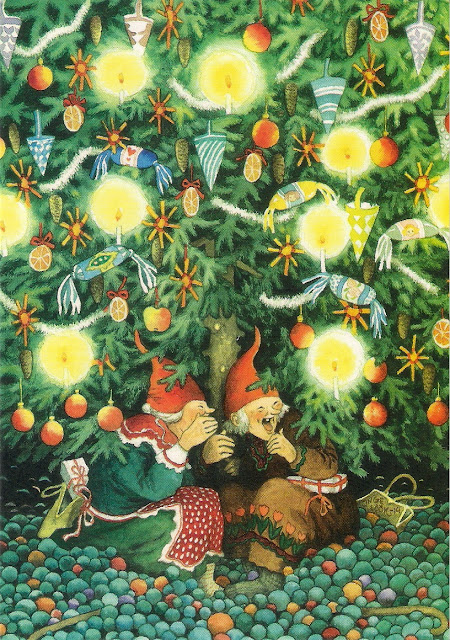 Wishing everyone happy holidays and a Merry Christmas.  Of course Inge Löök's mischievous Aunties are already enjoying the season.
Posted by Joy at 15:59 1 comment:

Joy to the World 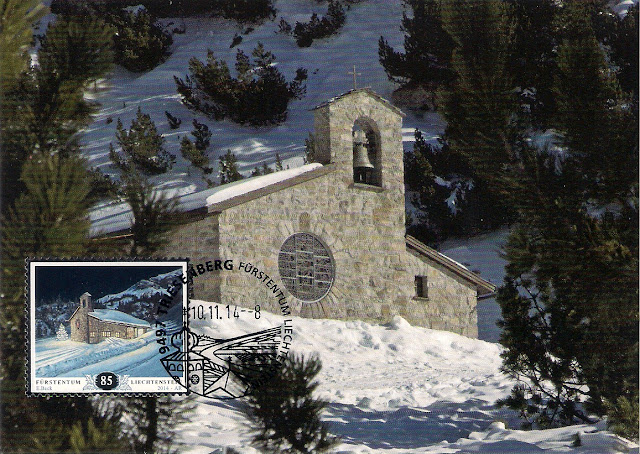 I featured one of Liechtenstein's "Mountain Chapels at Christmas" stamps last year and couldn't resist sharing another one this year as I imagine it settling into its snowy redoubt as Christmas approaches.  This is the highest place of worship in Liechtenstein, where it stands beneath the Ochsenkopt (7,500m/2,286 ft) and above the mountain village of Malbun.  It was built in 1950/1 as a Chapel of Peace after World War II and designed by the Swiss painter and architect Johannes Hugentobler (1897-1955) who also created the round stained glass window which can be seen on the card. Thanks to Flickr one can see what this beautiful  window looks like from the inside here. Erich Beck's painting on the stamp makes the building look very welcoming with the lights shining through the windows into a dark night.
I couldn't find any round stained glass windows in my collection but did find one from the Saint Sauveur church on Guernsey which also features Mary and Jesus, this time accepting gifts from the Magi 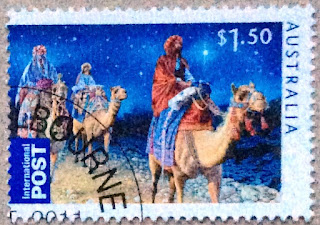 and here are the Magi on their journey following the star. Part of Australia's 2011 set which consisted of three secular and these two religious stamps 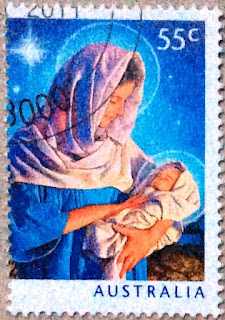 They were designed by Gavin Ryan who I always associate with his whimsical and amusing Road Trip stamps but Australia Post's choice of artist must be for his story telling abilities. 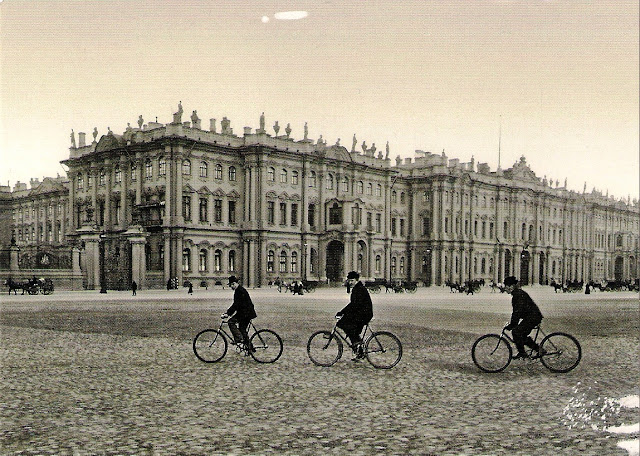 Three cyclists pedal across Winter Square, two turn to gaze towards the photographer.  Were they friends of the photographer or was it  just serendipity they were cycling past?  I would love to know their story but they will remain forever, enigmatic, captured in a moment of time. The date is c1903, the year of St Petersburg's 200th birthday which was celebrated by the aristocracy in February 1903 at the Winter Palace with what was called the "last spectacular ball in the history of the Empire" when they all dressed up in 17th Century Costume. November would bring a massive storm when many rushed down to see the flooding River Neva's huge waves.

one of the brown bear definitives and a pine tree (Pinus stankewiczii) from the 2015 Flora of Russia set.  The dusting of snow on the cones is appropriate because my postcard was sent by Diana in Siberia.

How the species were chosen for the stamp set is interesting.  In 2014 millions of people took part in a vote for the green symbols of each of Russia's 85 regions.  The choices of Moscow (oak) St Petersburg (Acer) Crimea (High Juniper) and Sevastopol (the stamp shown) were used for the set.  An interesting political choice, two centres of power and a geographical area annexed by Russia in 2014.  All of the 'green symbols' will be planted in the 'Avenue of Russia' located in the famous Victory Park gardens in Sevastopol which has plants that represent all Russia's climate zones and is a big draw for tourists and  botanical enthusiasts. 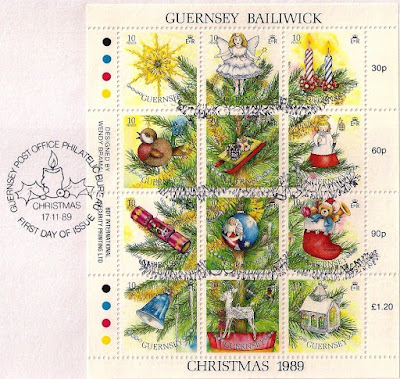 Guernsey Post have decorated their tree ready for Christmas.  Hope the two candles are not going to get too near the fairy's highly inflammable dress.  The robin is busy chirping its tune into the air but the Åland robin is too busy wrapping presents. I wonder whose name is on the label? 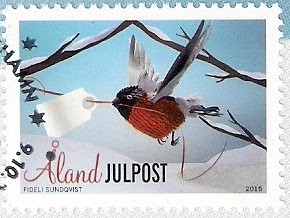 This came on my Åland Christmas postcard and is one of 2015's two stamp set, both of which are the creation of the Swedish paper artist Fideli Sundqvist who makes the scenes and then photographs them. The little paper feathers actually show up better on the scan than the stamp, although that may just be my poor eyesight. 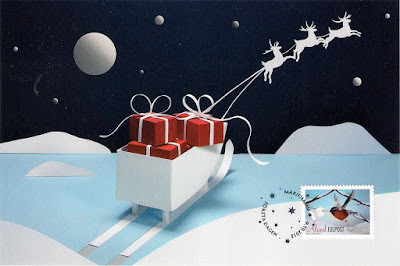 Here is the front of the postcard which is also the other stamp design. The 'Strictly Paper' blog has an interview and pictures of  Fideli Sundqvist other creations here for all paper art lovers
More robins? 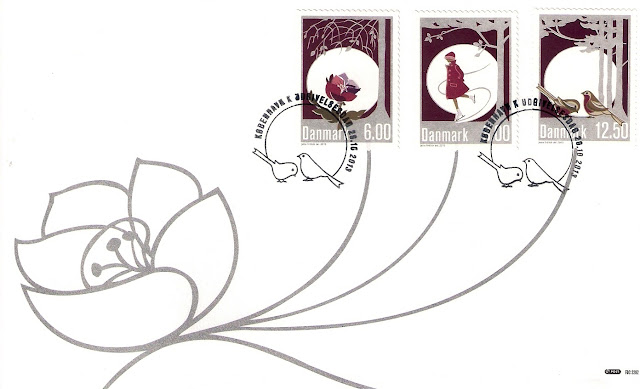 The artist of the beautifully designed cover and the stamps is Jette Frölich who specialises in Christmas decorations (Jette Frölich Design).  From memory I think Denmark Post also produced her Christmas cards and seals to go with the stamp set in 2013.
Jette Frölich's inspiration for the set was the memory of skating in her childhood, the resilience and hope of the Christmas Rose as it blooms in the cold and frost and the robin is to remind people to feed the birds over winter.
The general title of this stamp is two of Santa's brownies under twinkling skies.  In reality the starry sky is a hologram and is indeed especially shiny and twinkly especially under artificial lights.   Santa must be worn out after delivering all his parcels, even with all his helpers, so he must be ready to go home and relax 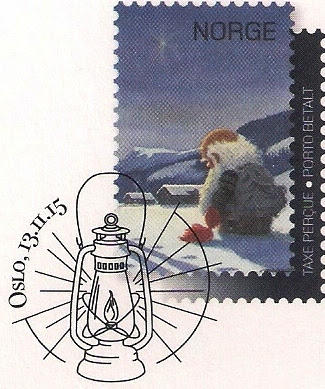 And he does look ready for a sit down after his journey through the snow with his little rucksack but the light is on in the house in the distance and he will soon be snug and warm, or perhaps he is still delivering presents. This little chap is featured on Norway Post's 2015 Christmas card feeding a cat and they call it Santa and the Cat but in Norwegian it is 'Nissen og katten' and the Nisse is a much older tradition connected with the winter solstice.  He does not live at the North Pole but in the forest, is a small old man with a white beard, grey sweater and trousers, a red pixie hat, red stockings and wooden shoes who lives for hundreds of years.  Today he has morphed into Santa and there is a tradition of putting out porridge for the nisse on Christmas Eve for he brings presents but also can control your fortune, best be on his good side. 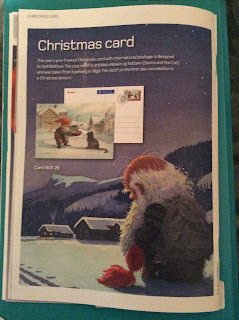 Here he is featured on a page of  Norway Post's booklet sharing his porridge with his cat.  I don't know enough of Scandinavian mythology to explain the cat's story but I know I'd love to share a bowl of porridge on a winter's day if the nisse comes calling.

One of China's pre-cancelled stamp booklets of which I have a handfull from the 1980s.  This particular set of stamps they called a semi-postal issue but are generally known as charity stamps. As can be seen each stamp has a description 'In the Sunshine' and 'Healthy Growth'.  A choice between a ball and a panda, oh dear which one to choose. 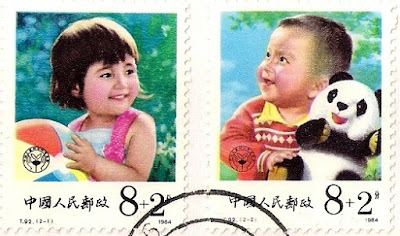 The reverse of the booklet explains 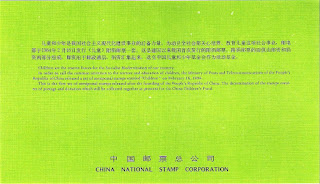 "Children are the reserve force for Socialist Modernization of our country".  The statement lacks a bit of the joys of childhood but happily not the stamp images.  I like the growth motif of the cancel which is 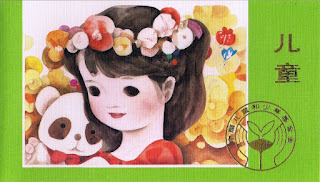 repeated on the booklet cover.  Continuing the theme of 'socialist modernisation' then five year plans were all rage as we moved into the second half of the 20th Century 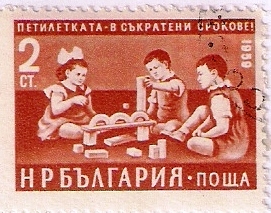 and this shows children playing in a kindergarten as part of Bulgaria's 'Five Year Plan' of 1959.  I'll turn to something a little more seasonal now. 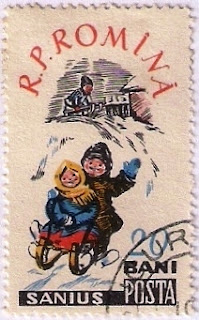 and two of the stamps of Romania's 'Village Children's Games' issue of 1960.  One can also learn a bit of Romanian on the way, sanius being sledding 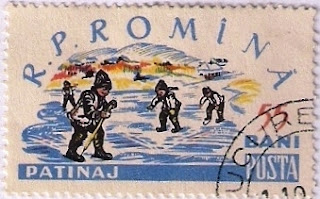 and of course patinaj, ice skating. I say seasonal but we have had weeks of rain here and at the moment my county of Cumbria has red flood warning out, happily today is a respite and the sun has come out.  The warmth that comes with the rain means there will
be no ice skating here this month.  I wonder if there is still time to head south to the sun? 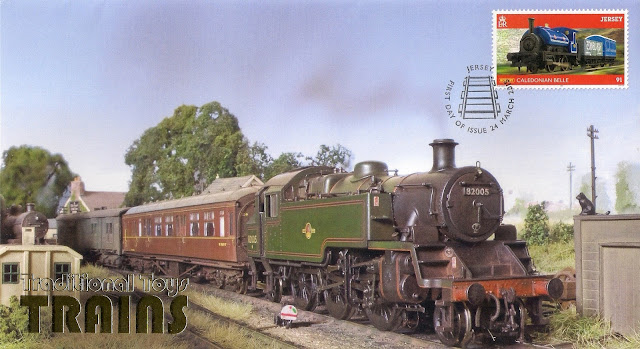 The cover shows Combwich Station in Somerset, which has only ever existed in the imagination of the model maker Chris Nevard, who also took the photograph.  The stamp is one from Jersey's contribution to this year's Europa theme of 'Traditional Toys' where they featured illustrations based on the artwork used to produce the ever popular Hornby train set boxes. 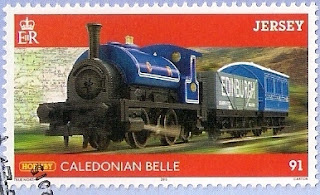 An entry to Sunday Stamps II theme - Playtime: toys or games - skip over here to play