You Lookin' At Me 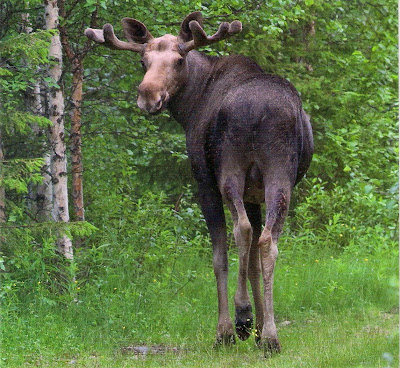 Unlike reindeer the European Elk is a truly wild creature and in this postcard it roams the Finnish forests. In the Finnish language it is called - hirvi.  Don't those antlers look wonderfully velvety.  The Wiki Brain tells me that elk or moose are distinguished by their palmate antlers. Palmate was a word I had not come across before and I learn that it means hand shaped with lobes radiating from one centre.

Eeva tells me Finland "has a good population of these handsome animals"  I looked up what the numbers might be and learnt in the summer there can be as many as 115,000.  That is whole lot of handsomeness.
Posted by Joy at 21:11 2 comments: 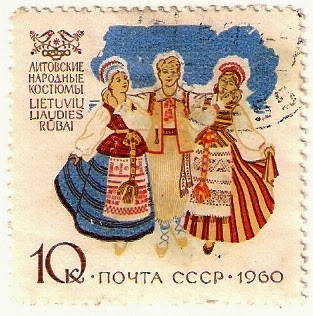 At the height of the cold war the USSR issued a series of stamps on Provincial Costumes.  It is interesting to see from today's perspective that most of the costumes featured are now from independent countries issuing their own stamps. This one shows costumes from Lithuania where the aprons are always a geometric design.

Next comes Georgia and Byelorussia (today's Belarus).  I like how the designer, Valeri Pimenov,  has decorated the wording to look like a piece of ethnic embroidery or sash.

Here we move east to Azerbaijan and Turkmenistan and unfortunately  the last of the stamps I possess.  I'm now wondering why I have never pursued the others to create a whole. I feel a project coming on. 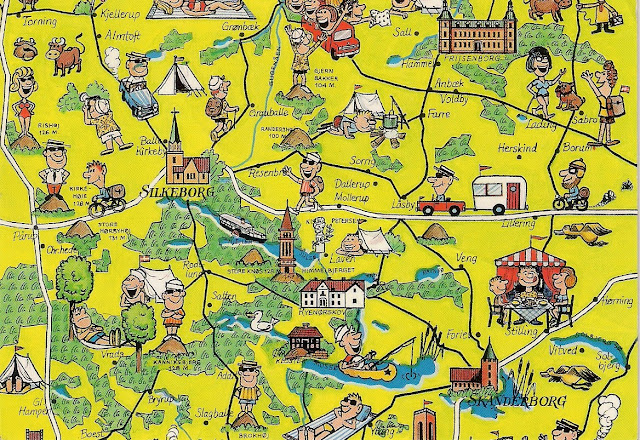 When I came across this gem of a card in a second hand book shop (randomly amongst a box of train postcards), I assumed from the German stamp and message it was from somewhere in, yes, Germany. But no, on closer inspection I discovered all those jolly people are holidaying in Denmark. To be precise, East Jutland, a hilly land of expansive forests, lakes and sandy shorelines.  Not that the latter are on the card although  it is something I always associate with Jutland.  Now I can see that a lot would be missed if one did not head inland.  This is just the card to get out in the approaching dark days of winter and be reminded of sunny summer days.
Posted by Joy at 23:45 4 comments:

I won't be around for next week's se-tenant theme so thought I'd take the opportunity to  include this delightful example. The mermaid label says "Keep the Sea Clean".  The artist, Oscar Bonnevalle, takes us on a trip along the Belgium coast. Bonnevalle, a philatelic enthusiast, produced 155 stamps over his lifetime and was commemorated on a Belgium stamp in 1996.

The first stamp shows the Ostend registered 0.148 'Snipe' trawler heading out to sea and and the horse is interesting for Belgium must be the only place in the world where fishermen trawl for shrimp on horseback. Next the Zeebrugge registered trawler Asannot passes those things familiar on northern European beaches, the windbreak. The third stamp shows a cross-channel ferry, the last far out in the distance a container ship passes by while spotted redshank and oyster-catchers patrol the beach 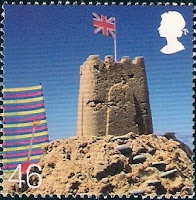 All the familiar objects of beach life also appear on the 2007 GB set 'Beside the Seaside'.

The beach huts shown on the stamp are rather plain but possibly the most famous in England are those in Southwold, Suffolk with their little verandas that rarely come up for sale but when they do can cost as much as a house.

Lets  take it easy and watch the children being taken for a ride on the donkeys unfortunately there is a stamp missing from my set which is the ice cream cone so I can't offer you one of those. 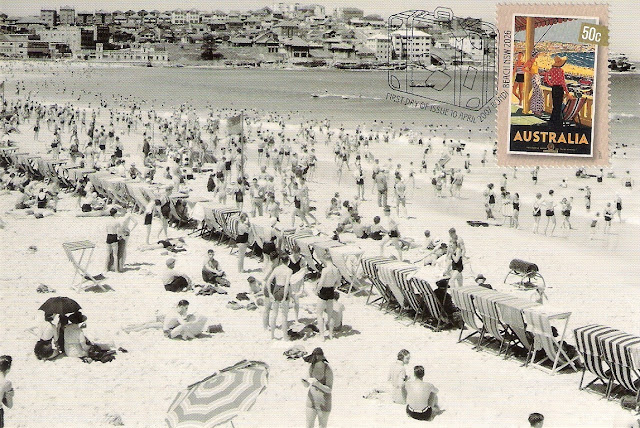 And lastly one of the most famous beaches in the world, Bondi, where sunshine is guaranteed maybe that is why the group on the left is sheltering under a very small umberalla. The stamp is from the 2007  'Nostalgic Tourism' series showing tourist posters from the 1930s. The one shown is "At the Beach" by the prolific Percy Trompf who designed and painted thousands of posters and won many prizes. 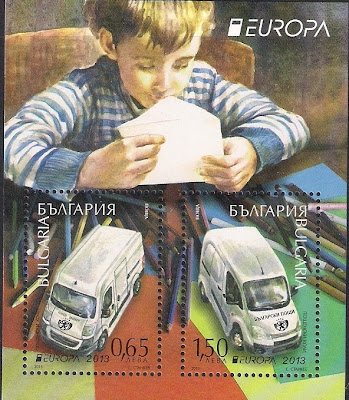 Emilyan Stankev has drawn a table full of coloured pencils surrounding toy vans, perhaps the little boy is sending a  letter is to thank whoever gave him them. The Bulgarian post logo is on the vans of which on the 65 leva - a Citroen Jumper 2.2 and on the 1.50 leva - Citroen Berlingo 1.6 HDI

So now the letter is written time to post it
This red cast iron post box appearing on the Malta stamp is a legacy of the British period in the Maltese islands, its royal cipher and crown familiar in the UK.  There are 160 surviving boxes in Malta and they have all been given protective status.

But back to motorised transport and thanks to Eeva who used these two Finland stamps on her envelope I have the stamp that won the Jury Prize for best 2013 Europa stamp (the one on the left) complete with postmen in those wonderful uniforms. I don't know what marque of postal bus it is but they were nicknamed the "Yellow Speeders". I would have loved to have ridden on one of those.  The Finnish Postal Bus service started in 1921 using a Benz Gagganau truck with wooden benches and a roof to give shelter from the rain, the one shown on the stamp looks much more sophisticated.   The first route was in Lapland and proved popular so soon expanded and by 1939 there were 60 route, the war interrupted the service and when they started up again in 1946 new routes opened and by its peak in 1971 there were 222 routes and 420 buses  The other stamp is of course a modern postie and VW van. 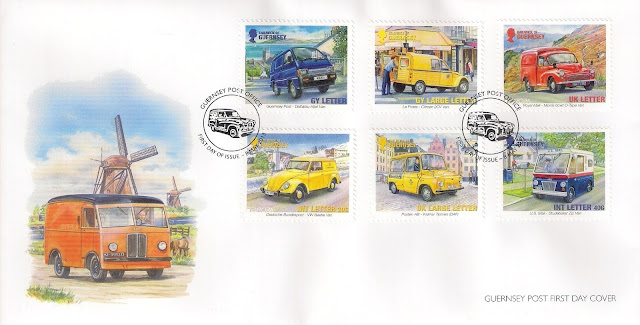 Royal Mail have hidden away their Europa postal van entry as part of a 'Workhorses'  miniature sheet so thank goodness Guernsey Post have risen to the occasion and show vans on their rounds starting with, top row L to R for the
Second Row:


An entry to Viridian Postcard's Sunday Stamps theme - The Post