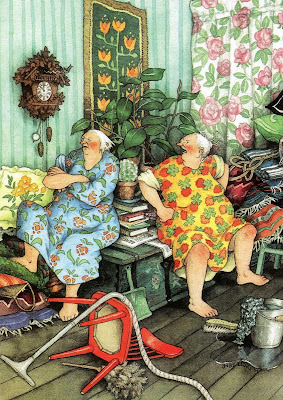 Last week I showed Inge Löök's fun loving elves so this week its the fun loving aunties turn although things don't seem to be going too well.  One turns to look at the clock, yikes look at the time!  Are they cleaning ready for Christmas; the Finnish tradition is  that the 9th December (St Anne's Day) is when baking, cleaning and brewing starts. The aunties will have left it until the last minute and everything has to be finished by 21st December (St Thomas's Day) but the clock is ticking the minutes away, will they be ready?  The auntie on the left looks fed up with it all, she has had enough.  The big feast of the year in Finland is on Christmas Eve and Christmas Day is for relaxation and simpler meals. But for 'Postcards for the Weekend' purposes lets imagine it is New Year's Eve, another big celebration, and as the clock says 10 it means they have only a little time left to be ready for their visitors and wish them Hyvää uutta vuotta - Happy New Year.  Wishing you all health and happiness in 2017.

Postcards for the Weekend theme - Time/Clock -  check what time it is at Connections to the World  Linky Party.

Australia chose a biblical quotation for the Christmas of 1960 taken from the Gospel of Luke 2:10 ... "Behold I bring you good tidings of joy", the words of the angel to the shepherds watching their flocks by night. 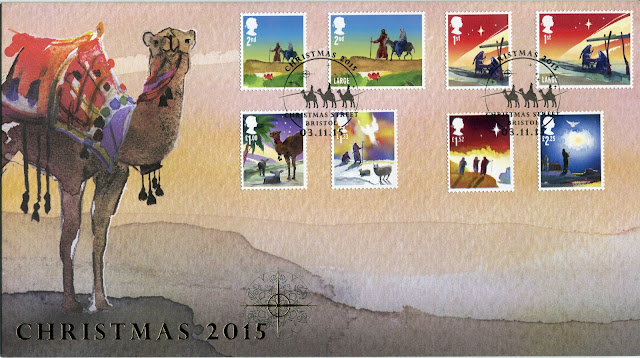 The Christmas story was GB's choice for the 2015 issue and the stamps were painted by David Holmes who has also painted the image on this First Day Cover envelope.

Art Direction and design of the stamps was by Studio David Hillman whose says on his company website "My philosophy is that pictures are not employed to fill space but tell a story".


Wishing you all a Happy Christmas 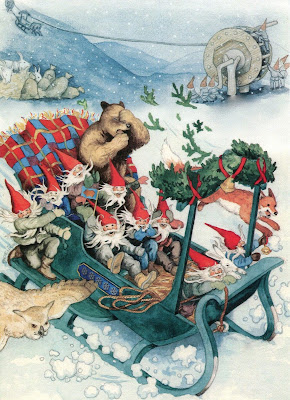 What better way to spend part of the winter holidays than hurtling down a slope on a sleigh although perhaps the bear doesn't agree. The excitement is increased by a flying owl and galloping fox keeping pace.  I always enjoy all the little details Inge Löök puts in her art like the rabbit on the front with its ears flying back and the elves in the background getting the next sled ready for another exciting ride. I am sure you will be able to spot some more.  Thanks to Eeva for sending me a lovely bundle of wintery postcards for Christmas from Finland which enabled me to show the joy of the elves winter sport as imagined by Inge Löök.


Wishing winter fun and a Merry Christmas to you all.

Postcards for the Weekend theme - December Holidays - enjoy the season at Connections to the World.
Posted by Joy at 18:35 3 comments: 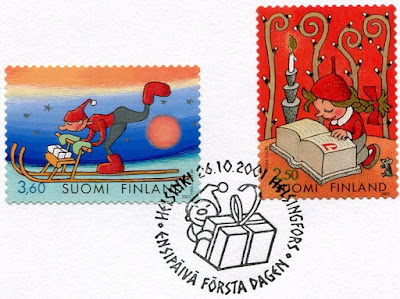 A girl elf with her plaited hair looking through Santa's A-Z book. Is that a J on the page?  Hope my names there!  The presents are then delivered on a moonlit winter's night by an elf boy on a kick sled.  These stamps were the last to be issued in Finnish currency (the markka) the next ones in January 2002 would be in euros.  The stamps are illustrated by Pekka Vuori (b1935) a famous illustrator of his own and other Finnish authors children's literature. 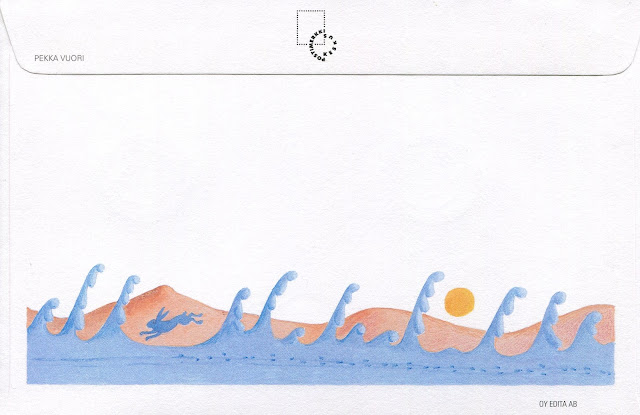 Pekka Vuori likes to draw Finnish folk heritage and continues his illustrated envelope on the reverse with what must be a hare, associated with the moon in cultures across the world and of course is supposed to be magical.
Father Christmas is also busy delivering parcels and when he has finished whizzes home on his empty sledge. These are illustrated by Fredrik Skavlan, Norwegian TV host and children's illustrator. 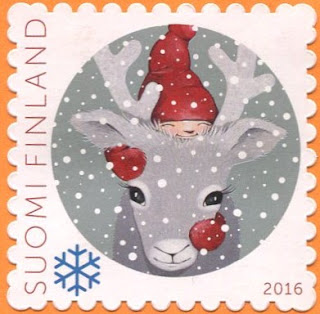 Lastly is one of this year's Finnish stamps called 'Run My Reindeer' which was one of the winners for this year's competition to design Christmas stamps.  Yes I'd like to cuddle a reindeer too and this stamp makes me feel as warm and fuzzy as those gloves.  The illustrator, Sari Airola, says
"To me, one of the most important aspects of Christmas is friendship and caring for others. I wanted my stamp design to conjure up friendship and warmth. I selected classic Finnish Christmas characters, a reindeer and an elf. The reindeer is related to Father Christmas and Lapland, and Finnish elves traditionally care for farm animals and the inhabitants of forests. My stamp design depicts the friendship between the two characters during a Christmas trip."


An entry to Sunday Stamps II theme - Secular Christmas - enjoy the solstice at See It On A Postcard
Posted by Joy at 12:52 4 comments: 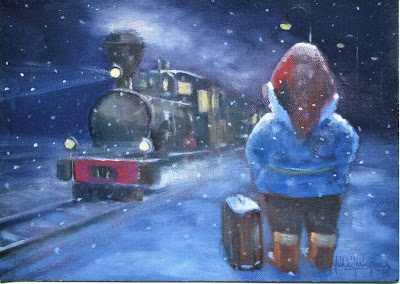 A lot of people will be doing this soon, whether travelling home for the holidays or just travelling to friends or family for Christmas.  The card is simply called 'Asemalla', Finnish for 'At The Station'.  Our traveller is wrapped up warm with a nice pair of boots and as the snow swirls around, a distant sound can be heard, suddenly, bright lights pierce the dark and the train comes into view. I have stood on a lot of cold stations in winter over my life and it is always a relief when the train arrives and one can sit down in the warmth.  Of course this train would be even more welcome to me because it is a steam one.  But who is the traveller on the postcard?  The artist is  Heikki Laaksonen who paints oils of the Finnish countryside but also a lot of gnomes, especially ones at Christmas for his postcards.  Who knew they travelled by train.

Fancy some competitive skiing at Christmas? Here is the sticker Eeva put on the back of the postcard. 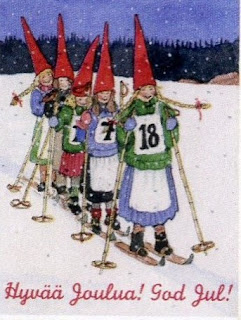 Postcards for the Weekend theme - December Holidays - travel to the Linky Party at Connections to the World
Posted by Joy at 20:58 3 comments:

Let's head over to some inhospitable mountains in Antarctica located in Queen Maud Land. This is part of the Norwegian Antarctica where there are 12 research stations, only 6 of which are occupied all year round.

Here are the stamps 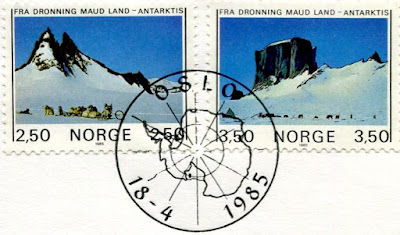 with their little teams of huskies. On the left is Sagbladet or The Saw Blade and on the right Hoggestabben Butte, a butte is an isolated hill with vertical sides and a relatively flat top, and the translation of Hoggestabben is - The Chopping Block.
A more accessible mountain in China is next and it is the northernmost of "The Five Great Mountains of China",  Mount Hengshan in Shanxi Province.  A mountain sacred to Taoists but one of the least visited of the sacred mountains and so relatively less commercialised. The wikipedia article is quite lyrical about it saying that to get to the top is "a lovely hike of three hours where the summit is covered in fragrant lilac blossom in June" 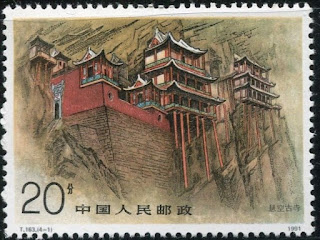 Its most famous aspect is the Hanging Temple which is set into a sheer precipice 246 ft (75m) high. It was built in 386-534 and unusual in that it combines three traditions - Buddhism, Taoism and Confucianism.

The mountain was painted by Yang Wenqing (b1954) and engraved by Li Defu.  Yang Wenqing has painted many stamps for China Post and won the Best Stamp Painting award in 1980 and 1982. 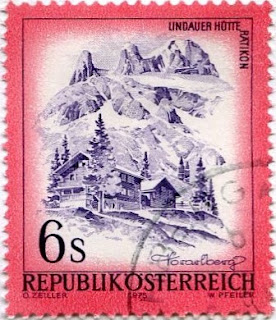 Lastly is a stamp featuring the Rätikon Massif and the Lindauer Hütte which perches at 1300m, perhaps a good place to take off ones hiking boots for rest and recuperation ready for the next day in the mountains.  Featured on one of Austria's lovely definitive stamp series of the 1970s sometimes called Beautiful Austria, although my catalogue calls them rather prosaically 'views'.

An entry to Sunday Stamps II theme - Mountains - reach the heights at See It On A Postcard
Posted by Joy at 21:42 4 comments: 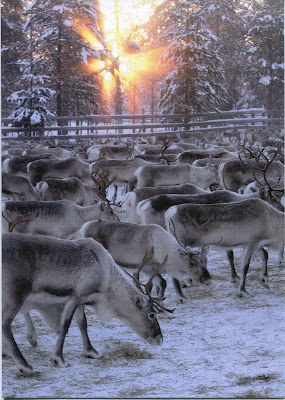 This postcard shows the low light of winter sun in Lapland.  Looking up how long the day is in this the second week of December I find that the sun arrives at 10am and sets at 2.30pm. Snow of course is guaranteed although its depth will vary depending on which part of Lapland one is.  The Sami people have herded reindeer for centuries here and the reindeer ear markings show who they belong to, useful for their are five hundred thousand of them roaming across the three areas of Lapland.

Reindeer are marvelously adapted for the conditions of winter, their pads shrink and tighten exposing the sharp rims which become almost non slip and these sharp rims also enable them to cut through ice and crushed snow which also make it easy for them to dig through snow for food, their favourite being a lichen - reindeer moss. Another advantage is their two fur coats insulating them from the cold, a dense woolly undercoat and a longer haired outer coat consisting of hollow, air filled hairs. Just like growing their own duvet.  I wonder which reindeer Santa Claus has chosen for his sledge this year? 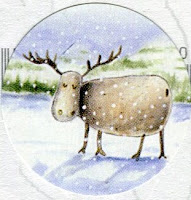 Postcards for the Weekend theme - Winter Scenes - joining the winter party at Connections to the World
Posted by Joy at 19:07 6 comments:

Its snooze time for these little creatures on the latest series of the Post and Go stamps which in November featured four hibernating animals.  I like how the artist, Chris Wormell, uses a circle as a theme

showing the animals curled up for the winter.  I think I would like to do that too. The question is which one would I like to be, the dormouse with its fast beating heart, the leathery brown long eared bat, the prickly hedgehog or the slithery grass snake. The dormouse looks to have the coziest nest which may sway my decision, and perhaps I would have an invite to the Mad Hatters Tea Party.
Some larger animals are roaming the Romanian countryside

European Mouflon or wild sheep , Common Genet, and another appearance for the dormouse this time at its active time of year.  I've never seen a genet but there colouring looks lovely, an introduced species from Africa, it likes a wooded habitat.

Lastly a stoat and and an Egyptian mongoose or Ichneumon that likes to bask in the early morning sun. I've never seen one of these in real life either but Kipling's tale of Rikki-Tikki-Tavi and his fight with the cobras is hard wired into my brain from childhood.

An entry to Sunday Stamps II theme - Wild Animals - roam free at See It On A Postcard
Posted by Joy at 12:36 4 comments:

The wild Atlantic Ocean boils around the La Vieille lighthouse at the Pointe du Raz in on the western tip of Brittany, France.  This lighthouse started operating in 1887 after five years of construction delayed by fierce tides and the fact that they could only build for half of the year because of the conditions.  La Vieille or The Old Lady and its companion the Petite Vieille, guide mariners through Raz de Sein with its whirlpools, strong currents and sharp rocks. The Point du Raz lighthouse that can be seen on the rocky headland in the distance consists of a lighthouse and a lighthouse keepers cottage but stopped operating in 1887, presumably when the grouping of lighthouses out at sea came 'on stream'.

This part of the coast is a popular tourist destination with the added interest of spotting the lighthouse when one gets to the end,  however the photographer, Jean Guichard, has braved the elements with his photograph.  For landlubbers the Finistère coast has attractive coastal paths and if you want to go for more than a saunter then this is the western end of the E5 European Long Distance footpath which runs for 3200 km (1988 miles) to Italy.

Postcards for the Weekend theme this week - Lighthouses - set sail to see more at Connections to the World
Posted by Joy at 19:56 5 comments: