A wooden bridge spanning the Raut River, a tributary of the more famous Dniester River. I liked the description of it as a 'wooden flying bridge' and it seems to be inviting us to take the first step and walk across. 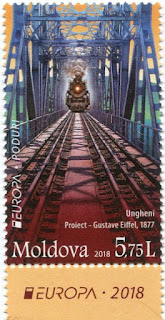 Just get out of the way on this bridge as the train thunders towards us. This is the Eiffel Bridge at Ungheni, a strategic railway bridge over the River Prut, on the border between Moldova and Romania.  The bridge was completed in 1877 just before the Russo-Turkish war of 1877-88 broke out in the region.  Gustave Eiffel's metal construction company built bridges all over the world but it is said his  favourite creations were railway bridges.  The stamp shows the bridge to dramatic effect but I must admit that the actual bridge looks rather more low key 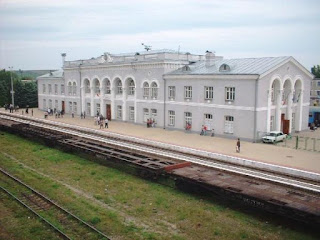 unlike Ungheni Railway Station which is a beauty.  For the railway enthusiasts it is where narrow and broad gauge meet.
Another railway bridge but the colours and the jaunty blue and white train puts me in a holiday mood. This is the Valdragone Railway Bridge with the towers of San Marino in the background. The electric train used to run from Rimini to San Marino city centre from 1933 to 1944 but today there is no operational railway.
The 1984 Europa stamp was a return of the common design to celebrate 25 years of CEPT and this bridge design will be familiar to us all.  Happily for something different it is on a Maximum Card showing the Luxembourg Viaduct, known locally as simply The Paserelle or sometimes The Old Bridge and runs south of the city centre.  The viaduct was built between 1859-61 to link the city's railway station but located away from the centre so as not to detract from the defensive capabilities of the city's fortress.
Next we have a bridge in the mist, clouds and snow of Norway.  The Commemorative sheet shows Hardanger Bridge and the construction workers on the walkway of the bridge suspension cables. Faintly in the background of the sheet can be seen the construction drawings.  This photograph gave rise to an alternative name on social media of the Sky Bridge.   It is the largest suspension bridge in Norway (1,380m or 4527ft).  The towers are 200 meters above sea level and the main span is the longest suspension span in the world, longer than the Golden Gate Bridge.  From the middle of the bridge shown on the stamp I learn there are great photographs to be had of the fjord.
Lastly something I always enjoy, a bridge reflected in water. The Richmond Bridge in Tasmania is the oldest span bridge in Australia (1823) and is on their Nation Heritage listing and can be found on the B51 - the "Convict Trail", which as the name implies was built by convict labour.  Here it is featured at the blog 'On the Convict Trail'.

Sunday Stamps II theme this week is - Bridges - for more cross over to See It On A Postcard.
Posted by Joy at 12:47 4 comments:

My first thought on this week's Sunday Stamps 'tall buildings' prompt was New York.  The skyline made an appearance on this stamp with a Lockheed Constellation flying over it. Alas I did not have any other US stamps featuring skyscrapers but
the United Nations came to my rescue with its building in New York and a rather attractive postmark. So what other country came into my mind?  Well with its lack of space it has to be Hong Kong
and an evening skyline.  I don't know what the buildings are but
at least this stamp tells me this is the Hong Kong Convention and Exhibition Centre. The building sits like a giant bird made of steel and glass by the water of Victoria Harbour, however the tower in the background, not a clue.   From the shining metal and glass of Hong Kong I turn to
the old brickwork of Our Lady Church in Kalundburg, Denmark.  Built about 1170 the church stands on a hill above the harbour dominating the skyline with its 44m (144ft) central tower and the surrounding towers of 34m named after saints.   Kalunburg lies on the island of Zealand which is where
Denmark's capital and the start of the journey of this registered FDC from Copenhagen.  I always enjoy watching a parcel tracking app as a parcel wends it way to me but this envelope does it in an analog way if one looks at the back. 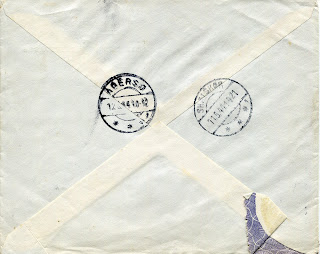 It has crossed Zealand from east to west arriving at Skaelstor on the same day 11 May 1944 and then taken the short trip across the water to the small island of Agerso, arriving with its recipient the next day 12 May 1944. Agerso is reputedly a tranquil place with a scattering of old farm houses, possibly a nicely out of  the way place for a Dane to be in 1944 when Denmark was under German military rule.
The stamp shows the 17th Century 'Round Tower', an Astronomy observatory which is 36m tall however  if you take the spiral staircase to the top then you will have walked 209 metres.   Today it is used by amateur astronomers.
I like this atmospheric 'brave new world' image of the Miskolc-Avas Television Tower.  It was built in 1966 in place of an old wooden lookout tower and indeed retains that usage for it has an observation deck.  Standing 72 metres (236 ft) I imagine there are some great views to be had.

First (40) - is a dragon from the Anglo-Saxon epic poem Beowulf (spoiler alert, they both die at the end), (50) is George and the Dragon (only the dragon dies), we next travel to the Philippines (60) - The Bakunawa is believed to be the cause of eclipses, earthquakes, rain and wind.
Greek myth gives us next (70) - The Colchian Dragon which guarded the Golden Fleece, it was said to never sleep but the witch Medea put it to sleep with magic and drugs while Jason stole the fleece. European dragons are often perceived as evil and dangerous but - (82) The Chinese Dragon can be beneficial, spiritual and even sacred. The different colours have different meanings. Lastly is a Celtic dragon - (91) The Welsh Dragon whose origin may be the Great Red Serpent god Dewi.

The word dragon originates from the ancient Greek word drakon which translates as 'a giant monster  serpent-like creature' so lets see one
The Lernean Hydra, a water serpent with fatally venomous breath said to have between 5 and 100 heads with one immortal head.  The stamp shows Hercules performing his second labour where he cuts off its heads with the help of his nephew (and one of the argonauts) Iolaus who singes the stump with a burning firebrand to prevent new heads growing.  (The illustration is taken from an ancient Greek storage vase/stamnos).   I hope you are not going to have nightmares after seeing this writhing water beast from the swamp of Lerna.
Here is something more benign, the Cheshire Cat with the handy knack of being able to disappear when something nasty appears.


Sunday Stamps II theme this week is - Dragons, Mythical Beasts or Dinosaurs -  gaze on them at See It On A Postcard

The sun shines down in this aerial view at harvest time and the stamp shows a combine harvester busily working the field.  The stamp tells another story which is of satellite agriculture
something that was not dreamed of when this North Vietnamese stamp was issued.
As a lover of apples this is always a good time of year for me when the new season apples arrive in the shops.
These grapes look ripe for harvest although for the wine one would have to travel to San Marino as they export a minuscule amount.
Time to harvest some hazel nuts, well perhaps see if you can get there before the squirrels.
I think this harvest may be corn cobs with cotton drying in the background but the stamp gives no clue as it is called the 'Great Harvest' and I must admit that sure is a bumper harvest. 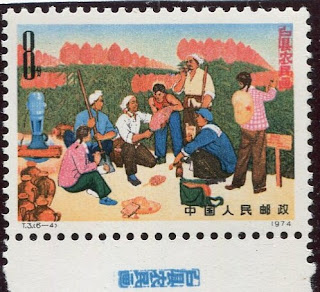 Time to take a break with the farmers of Huxian.