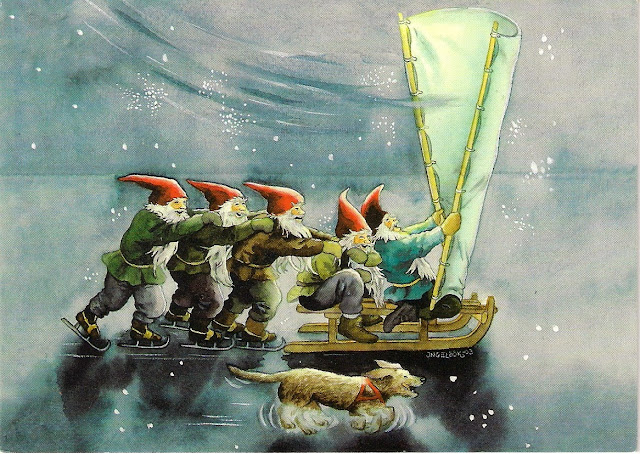 Time for the Christmas elves to have fun as they skate in the Finnish archipelago.  Inge Löök draws the dog's little legs working double time and I imagine it is barking with excitement.


Happy Christmas
or as these elves would say
God Jul
Posted by Joy at 14:57 No comments: 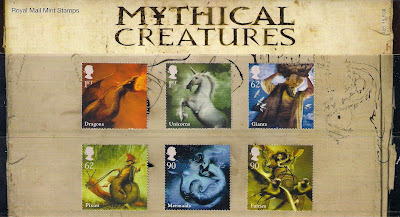 What better time for the fantastical in the dark days of midwinter when in past times story tellers gathered around fires and told their tales. Perhaps in those times unicorns hid in the forests and dragons waited in their lairs and lit the nigh sky breathing fire and giants walked the earth.

Meanwhile smaller creatures were abroad on land, sea and air.

I only occasionally purchase presentation packs but this one was irresistible. Not only had Dave McKean (illustrator, photographer, comic book artist, graphic designer) designed the stamps, but also the fold out presentation pack had more of his pen and ink drawings inside, and topped off by the fact that his long time collaborator, the author and fantasy genius Neil Gaiman, had done little stories to go with the stamps.  The one about fairies is only a few lines so here it is:

"Its not that they're small, the fair folk, especially not the queen of them all.  Mab of the flashing eyes and slow smile with lips that can conjure your heart under the hills for a hundred years.
It's not that they're are small.  It's that we're so far away".

Sheltering from the Rain 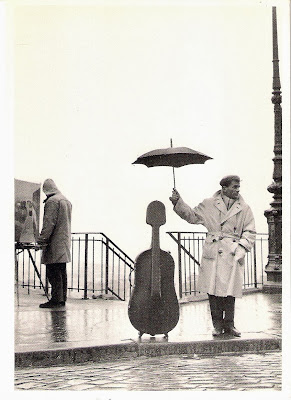 "Musician in the Rain",  Paris 1957 photographed by Robert Doisneau (1912-1994) who said "The marvels of daily life are so exciting, no movie director could arrange the unexpected found in a street".  In this case the photo may have been posed because it is of his friend the actor and virtuoso cellist Maurice Baquet who he extensively photographed.  Not that it matters for it is beautifully whimsical.

Postcard sent from Mathilde in the South East of France which I always associate with sunshine.  This photo reminds me of when I visited Paris one January and it rained in buckets.
Posted by Joy at 22:59 2 comments:

Angels have been a popular theme over the years and these divine messengers made an appearance for GBs 33rd year of Christmas stamp sets and were issued in 1998.

I like how the rich colours used are different palettes on each stamp. The designer, Irene von Treskow, born in Berlin in 1940, is a freelance artist and also an Anglican Priest.  I wondered how that improbable life journey from Berlin to a Church of England vicar was made and discovered, by chance, that she was interviewed for the British Library National Sound Archive (which holds millions of recordings).  Formats vary from cylinders made in the late 19th Century to the latest digital media of today (and the multifarious systems to play them). A recording of Irene von Treskow was made in 2002 as part of the "Oral History of the British Post Office" and yes it takes six sixty minute tapes to tell her story including her stamp designs both adopted and unadopted. 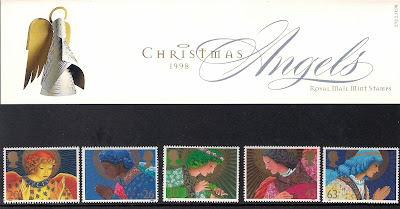 which would eventually look like the one on the top.  One of the stamp angels also appeared on the Christmas aerogramme that year.  Aerogrammes are now a piece of postal history, discontinued by Royal Mail in 2004.
. 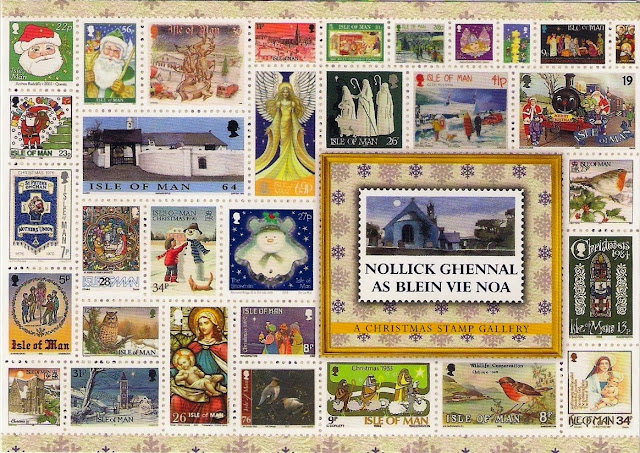 To celebrate 40 years of postal independence the Isle of Man sent out this Christmas card with a selection of the stamps they have issued over those decades. They look quite wonderful seen as a whole (the message on the card is Manx for Merry Christmas and a Happy New Year).   Now what if you had to choose six stamps from all the Christmas stamps issued over the years? 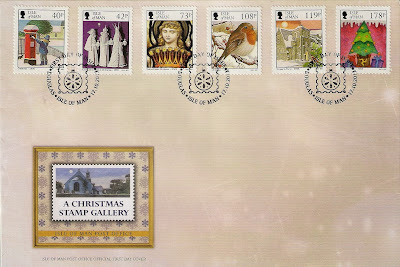 Well that is what they did for this year's issue of Manx stamps of the past.

The stamps feature today's postage, at the time of the 1990 stamp of a girl posting a letter it was 14p as opposed to 40p (which is still a whole lot less than GB postage).  The original set featured children doing Christmassy things in the snow.  They have cropped the original design which also featured a boy whizzing past on a toboggan on the road below the girl.  The 40p is from the 1991 'Paper Sculptures' set.  The 73p set of 2005 featured stained glass windows from Manx churches.  The always popular robin is one of 1988's Manx Birds. The church featured on the 119p is St Catherine, Port Erin from the 1995 set which sounds delightful as it included hedgehogs, robins and churches.  Lastly we have one of the many Christmas Trees featured on the 2006 stamp set.

Here is Snufkin doing a happy dance. Best friend of Moomintroll he stays in Moomin Valley in the Spring and Summer but in November heads south for warmer weather.  He is a free spirit who never asks the names of places when he travels because he just enjoys the journey.  I've kept the self-adhesive stamp on a piece with its cute Moomin airmail sticker. Another reason to be envious of Finland Posti is they produce stamp booklets with airmail stickers included.  Way to go Posti.
For my large stamp I've chosen what I consider to be a perfect miniature sheet consisting of four stamps which bleed to the edge and are a complete picture. At first I thought the climber to the left (100) was the largest stamp but the group wandering through the Alpine meadow on the bottom (140) just pips it by a few millimetres 77.5 x 28 mm (3" x 1"). The miniature sheet was designed by Fredy Trümpi and he has provided details to the Mountain Stamp website of the mountain's names, the hut has been placed there by his imagination.

With 140,000 members the Swiss Alpine Club is one of the largest Swiss sports club, the motto chosen for its 150th anniversary is "More than a Mountain Sport". Formed 15 years after the birth of the modern Federal Swiss state one of the first things it did was to improve the topographical maps of the Alps to make them more accurate and readable.  They also place panorama maps and observation towers in many areas to inform and intrigue both the citizen, walker or climber.  They also actively try to protect the landscape. The 111 Alpine Club sections manage 152 mountain huts (which make the Alps more accessible) containing 9,200 beds.  In 2012 this counted up to 310,000 overnight stays.   Things have altered a lot from 1863 but not the love of mountains. The black and white 19th Century photographs in the corners of the stamps are from the Swiss Alpine Club museum in Bern.