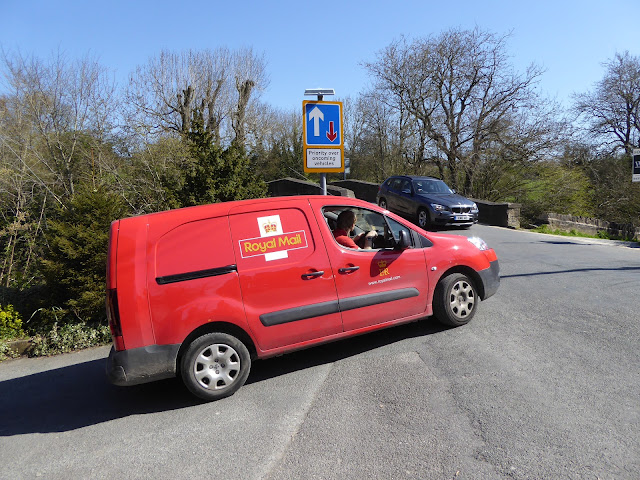 I'm away on the highways and byways of England passing postboxes on the way south so there will be a slight pause of posts here.  I leave you with a mail van waiting to cross the Scourer or Fisherman's Bridge over the Leeds-Liverpool Canal.
Posted by Joy at 00:22 1 comment:

A trip to the seaside with this stamp set although I suspect that the FDC envelope illustration is the same one used for the New York headquarters stamp which featured an alpine lake. The blue water looks inviting although it would be rather more chilly
than the balmy Mediterranean in summer featured on the UN Vienna stamps.  The perfect vacation destination.  Unfortunately I don't know who the artist is but the 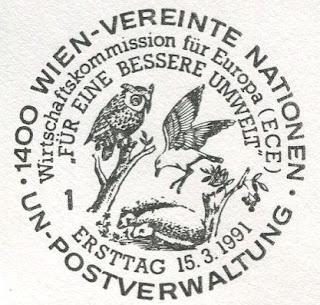 postmark deserves a feature of its own.  More fauna
on the first of United Nations stamps series on endangered species, although we do not seem to be running out of species to feature on this ongoing stamp issue. The 2019 theme is "below the water" another environment in trouble.
But lets take a moment just to enjoy the animals - Grevy's Zebra, the largest of its species sometimes called the Imperial Zebra which can be found in Eastern Africa.  A pair of Humboldt penguins come next who can be seen along the coast of Chile and Peru, their rocky habitat has made them into excellent climbers and they jump with both legs using their flippers for balance.  News recently that London is projected to become as hot as Barcelona prompted a discussion of the best animal to be reincarnated as to cope with earth's rising temperature, maybe this one, the Desert Monitor, they are good swimmers so rising water levels would be no problem either.  Lastly we have of course a wolf gazing over its territory. 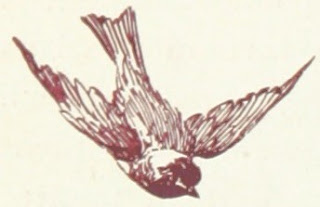 Sunday Stamps II prompt this week is the Letter U - here for United Nations and as I am about to go on vacation there is a - V for Vienna - for next week too - See It On A Postcard
Posted by Joy at 14:46 3 comments:

We are right in the middle of Wimbledon and this week's Sunday Stamps letter suits the day to a T so settle down with a bowl of strawberries and cream and watch some tennis.
The first German to win Wimbledon's singles title was Cilly Aussem (1909-63) in 1931 but whose career was tragically cut short by injury and illness. 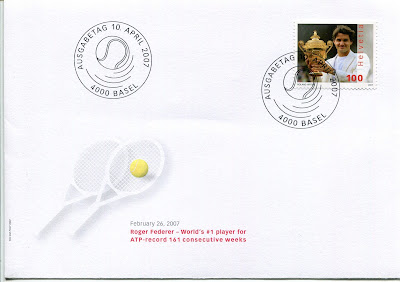 No mention of the Wimbledon singles title would be complete without the mention of Roger Federer.  The FDC celebrates him holding the ATP record in 2007 of being the World's Number 1 player for 161 consecutive weeks
and he is still gliding across the court and breaking records this year.  The stamp shows him holding the glitzy Wimbledon trophy.   The Wimbledon Championships are the oldest in the world held since 1877
but the history of tennis is much older although quite unlike today's game. This stamp shows a French 18th Century 'long court'

The 70+30 shows a drawing of a 16th century 'tennys courte' and the 1+50 is a 17th century game. The set consisted of 9 stamps and I live in hope some more will come my way.  The set can be seen here
The Olympics can trace its origin back through even older centuries and this is a stamp celebrating both the Atlanta games and the 100th anniversary of the Modern Olympics.   Tennis has a long Modern Olympic history but withdrew from the competition in 1924 due to the dispute over how to define amateur players.  The dilemma of amateur versus profession meant it did not return as a medal sport until 1988
although it was a demonstration sport in 1968 and in the year of the stamp, 1984, there was a competition for under 21s.  I like the tennis ball coming at us from the stamp
which may be a reminder to keep your eye on the ball. 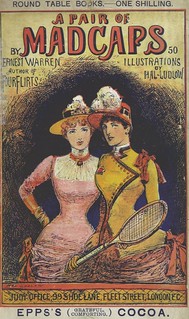