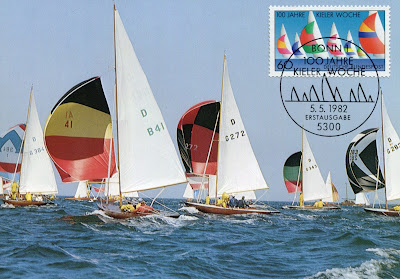 This week my Sunday Stamps is taking to the water in West Germany.  Near the southwestern shore of the Baltic Sea the biggest sailing festival in the world attracts millions of people every year to the city of Kiel. As they say 'from little acorns giant oak trees grow' for the very first event in June 1882 was attended by 20 sailing vessels, today it is about 2000.
In 1982 Kiel Week celebrated its 100 years and this stamp sailed into the post.  While visiting Kiel lets take a trip around the waterfront...
with one of Heinz Schilinger's (1929-2008) distinctive designs. He and his wife Hella designed dozens of German stamps individually and some as a design team but
another prolific stamp designer Karl Osker Blase (1925-2016) produced this view.  The stamp shows the Kiel Canal or North Baltic Canal and the tunnel running under it at Rendsburg, looking remarkably clear of traffic as a passenger ship sails past.  There is also another smaller tunnel at Rendsburg for pedestrians and cyclists.
Taking the high road over water here is the Köhlbrand Bridge which from 1974 has connected the port area of Hamburg with Federal Highway 7 (Bundesautobahn 7).
I wonder what the water quality is like under the bridge and how many fish swim by?  The stamp is from a set of 4 which promoted protection of the environment featuring waste, water, noise and air with the Environmental Conference Emblem (hidden somewhat under this heavy postmark).
But if one wishes to get away from it all this looks the perfect place or perhaps
sail along the River Rhine stopping off in Bonn, capital of West Germany. The stamp was issued on 12th January 1989, in November of that year the Berlin Wall fell and a mere 339 days later on 3rd October 1990 west and east Germany were unified.  For political reasons Bonn houses a third of the German administration the rest of course being in Berlin.  Peter Steiner is another significant stamp designer having produced about 70 stamps and since 2000 collaborated on many designs with his daughter Regina.


Sunday Stamps II prompt this week is the Letter W - for Water, week and West Germany - See It On A Postcard.

Vanuatu has 121 species of birds and 7 endemic species so it is no wonder that birds appear regularly on their stamps. The islands are covered with lush green tropical forests but the Reef Heron which is seen all over the Pacific stays, as its name implies, on rocky or sandy shores and reefs.  A solitary bird like most herons both parents share the task of raising their chicks.  The mini sheet shows every aspect of  a Reef Heron's daily life.

The Vanuatu archipelago lies on the Pacific 'Ring of Fire' and has five active volcanoes and one active underwater. The largest volcano on the island of Ambae erupted in 2017 and 2018 (the latest incident as recently as December).  Volcanic ash has covered the island killing crops and polluting the water and the 11,000 residents were ordered to leave permanently by the government last year and evacuated to neighbouring islands.  66 of the 80 Vanuatu islands are inhabited with the 16 main islands being where most people live.

The stamp issue of Reef Herons consisted of this mini sheet and and a five stamp set. 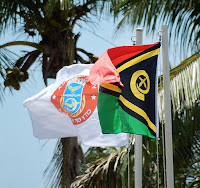 Sunday Stamps II prompt this week is the Letter V - for Vanuatu - See It On A Postcard
Posted by Joy at 11:50 4 comments:

United Nations chose fairy tales as their theme for the UNICEF anniversary stamps with two issued from each office.  The stories chosen for the USA headquarters were The Ugly Duckling (whose story I always associate with the Danny Kaye song from the Hans Christian Anderson film) but I was not familiar with Yeh Shen but with the help of Wikipedia learn it is a type of Cinderella story complete with wicked stepmother, golden slipper and a prince. This tale comes to us from Tang Dynasty China way back in the 7th Century.  The stamp shows Yeh Shen (Ye Xian) and the fish with golden eyes sent to her as a guardian spirit by her mother.  The story is told here
Other child related stamps were issued for the Cairo Population and Development conference in September 1994.

These were designed by Jerry Smath a regular contributor to 'Sesame Street' in his capacity of illustrator for the magazine and the monthly calendar.  He also writes and illustrates children's books and has done other stamps for the United Nations including this one celebrating the hobby of philately. 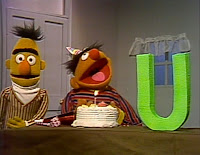 Sunday Stamps II prompt this week is the Letter U - for United Nations, UNICEF, USA and ugly - more for U at See It On A Postcard
Posted by Joy at 12:49 4 comments:

I like the muted colours of this set unfortunately I could find no information on the designer but here we have a dyer which happily for Sunday Stamps Letter T is Teinturier in French.  The other aspect of the stamps is the placing of the word 'Postes' so it almost looks like it could 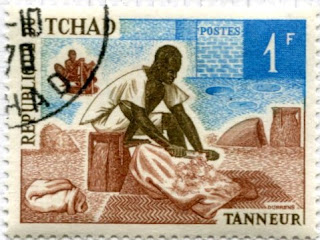 be a post office although perhaps it would have to be at some distance from a tanning operation.
Chad commemorated its independence in 1960 with a stamp celebrating its admission to the United Nations and the following year issued its first definitives as an independent country.  This stamp shows the province of Batha which is right in the middle of Chad and presumably in the 1960s had many lions.  Deforestation and livestock farming means that in the present time numbers have been decimated.
Travelling way back in time 6000 years then millions of animals roamed the area and the postage due stamps featured rock paintings from the Tibesti mountains in Sahara region in the north of Chad. The stamp description says - Tibestiox, which I presume is an ox

and this is Tibestiram which I first thought was a bird but I guess it could be a ram's horn. Your guess is as good as mine.


Sunday Stamps II prompt of the Letter T for Tchad, Trades, Tree, Teinturier, Tanneur and Tibesti - travel for more at See It On A Postcard
Posted by Joy at 14:27 4 comments: