Sliding with Slania in Sweden

Here comes Bamse the brown bear. Not only is Bamse the kindest bear he is also the world's strongest bear.  What is his secret?  Well like all bears he loves honey but the one he eats is magic honey prepared by his grandmother and called thunder honey (dunderhonung) which gives him his strength.  First published in 1966 and created by Rune Andreason he is still having adventures today.  The speech bubble is saying it is good (to go skiing) with friends but also with small friends. Here are some more friends going cross-country skiing with a four legged small friend
The stamp is captioned vitta vidder - white plains or white horizons and the artist Svenolov Ehrén (1927-2004) created 64 stamps in his career, four of which form part of this Arctic Circle set.
The scene portrayed is a drawing by the Sami Reindeer herder Nils Nilsson Skum (1872-1951) who created about 3000 drawings on reindeer herding and the Sami life. In the 1930s a number of harsh winters with heavier snow than usual resulted in reindeer numbers crashing and like many Sami in this difficult decade he abandoned reindeer herding.  Nils became an artist full time and a couple of hundred of his drawings appear in the books Sami Village (1938) and Tending Reindeer published posthumously in 1955.  Now I go to an era when Nils was just a boy and living far away from a big city where
skaters were zooming over Mälar bay, Stockholm.  The city is situated on 14 islands where Lake Mälaren meets the Baltic Sea so I imagine there are lots of possibilities for skating.   The picture is a woodcut of 1867 by K A Ekwall 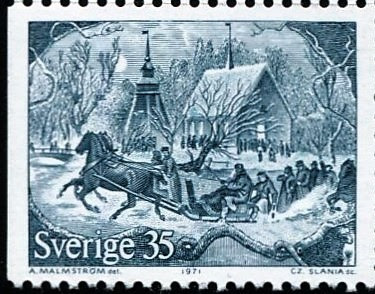 Here everyone is arriving in the Swedish countryside for the early service on Christmas Day in the 1870s and the artist August Malmaström pictures a fine set of horses and sled. The stamps are from a booklet of 10 stamps of 5 different designs each in a single colour engraved by Czeslaw Slania,

The Sunday Stamps II prompt this week is the Letter S - here for Sweden, skiing, skating, sled and Slania - slide over to See It On A Postcard for more on the Letter S

Our Christmas stamps this year featured postboxes and as the George V boxes are among my favourites I show the stamp featuring one of the GR lamp boxes often seen in rural locations. The church lights shine out through the gloom with the energetic chorister running down the path to catch the post. The artist, Andrew Davidson's, local postbox in Gloucestershire is an Edward VIII and from this he got the idea of featuring one from each monarchs reign on the stamps (the full set can be seen here).

A line of  Christmas music composed by Sigvaldi Kaldalon (1881-1946). He wrote about 350 songs mostly for solo voice and piano and it is said some have become part of Iceland's soul. The one on the stamp is a Christmas Carol called "It Was A Blessed Night" for which he put the poet Eimar Sigurdsson (1538-1626) words to music.
A carol more familiar to me is 'While Shepherds Watched' and to whom "the angel of the lord appeared"

This stamp has the sparkliest star ever but my scanner couldn't cope rendering it blue so I have pinched an illustration from the web which at least gives it some depth but no glitter. The difference between reality and representation struck me as appropriate when I noticed that earlier in 2010 Swiss Post issued a couple of  dazzling optical illusions stamps.  It may be easy for this angel to deliver good tidings
but for tiny elves sometimes there are difficulties, but with a bit of teamwork all things are possible. 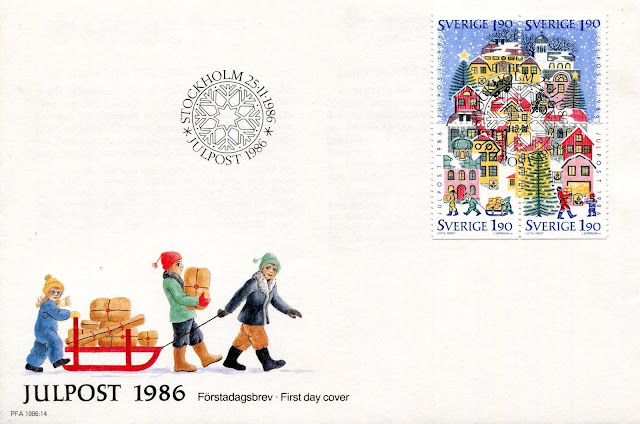 Both the FDC and stamps were designed by the appropriately named Lotta Frost
The Swedish Post Office celebrated its 350th Anniversary in 1986 and the Christmas stamps of that year featured four motifs forming a small town with its people and post.
Of course the Three Wise Men had a lot longer distance to travel with their gifts
although perhaps this is the greatest gift of all.  The full set of stamps can be seen here. 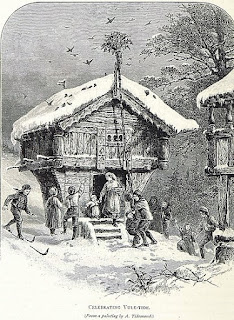 A Happy Christmas to you all.

This week Sunday Stamps II is celebrating Christmas - come and See It On A Postcard
Posted by Joy at 13:54 4 comments:

The massive Russian rockets needed to break free of Earth's gravity are being transported into place.   This Soyuz 30 rocket took off in 1978 with Commander Pyotr Klimuk on his third and last spaceflight and for Major Miroslaw Hermaszewski, the first Polish cosmonaut in space, it would be his only flight.

Their destination was the Space Station Salyut 6 where Hermaszewski would conduct the Sirena crystallization experiment to produce semiconductors in weightlessness and the stamp shows the crystal. The other stamp is the space station, map and the scientific research ship Vladimir Komarov tracking the progress of Salyut.

The set is part of a long series which ran from 1978-81 devoted to the Intercosmos programme which took a succession of guest cosmonauts from countries that were political allies of the Soviet Union into space.
The first Intercosmos flight was launched on 2nd March 1978 (Soyuz 28) with Vladimir Remek from Czechoslovakia who became the first man in space who did not come from either the USSR or USA. Remek was later, in 2004, elected as a member of the European Parliament and has an asteroid named after him. The commander on board was Alexsei Gubarev on his second and last space flight.

Two of the great Soviet stamp designers of the period , German Komlev and Yuri Levinovsky were commissioned to produce three stamps for each of the nine Intercosmos missions.  Komelev did the first four sets and Levinovsky the rest.  The concept was for each set of three to have one design illustrating preparation for the mission, one the flight itself and one an end-of mission scenario. These would be issued in real time with the 6k value available on the day of the launch, a 15k on the day of docking with the space station and a 32k on the day of re-entry and landing.  Only 26 of the 27 stamps were issued because the Soyuz 33 flight failed to dock with the Salyut 6 space station when its primary engine failed and had to make an emergency return to Earth.  The sometimes perilous nature of space travel.
Perhaps it is safer to keep ones feet on the ground and build a model rocket with these budding aerospace engineers.

This is a satisfyingly large stamp (7cm) to stick on an airmail envelope from Umm Al Quiwain and features a pair of parrotfish.  These fish live on a diet of algae and dead coral, grinding the latter with teeth in their throat and famously pooping sand, which is the undigested coral.
Don't know what these little fish are (goldfish?) but the stamp is one which came from a miniature sheet.  Today Umm Al Qiwain is part of the United Arab Emirates so to increase the number of stamps to show this week I journey to one of its other members
Fujeira. This stamp features a paradise fish and the late ruler of the emirate Sheikh Hamad bin Mohammed Al Sharqui succeeded by his son (who has the same name) in 1974. The duplicate names confused me for a while when I couldn't marry up the image on the stamp with the emirate's present ruler.  The stamp was designed by the Lebanese artist Samir Ghantous as is this one -
issued as part of an Olympic set the same year.

Sunday Stamps II prompt this week is the Letter Q - for Qiwain - See It On A Postcard
Posted by Joy at 14:16 4 comments:

This was Poland's second series on Provincial Costumes, which would continue to be a popular subject over the following years. I think these stamps possibly mark the end of a particular graphic style.  I wonder if the ornate borders are the embroidery of the region or perhaps they are the folk designs that appear painted and engraved on the Polish wooden buildings.  The whole set was drawn by Czeslaw Kaczmarczyk  but I have not been able to find anything about him.
The intricate decorative design needed many engravers of which J Miller appeared to be the busiest.  The engraver are also a mystery to me, I wonder where they lived in Poland, perhaps in the provinces the stamps show.
From historical costume to that of the moment
in this case the 18th Century. The painting by Antoine Watteau is owned by the National Museum in Warsaw and called The Polish Woman.  Perhaps if she walks down the hill into the meadows
she might gather a posy of wild flowers.

Sunday Stamps II prompt this week is the Letter P - for Poland, provincial, painting and posy - See It On A Postcard