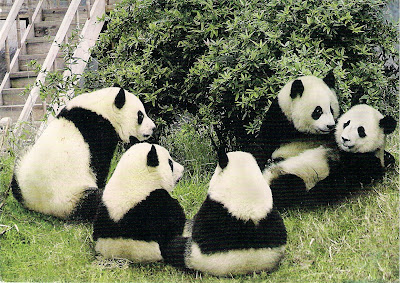 I wondered what the collective noun for Pandas was, wikipedia says it is a spoonful or for even numbers cupboard. Neither seemed to ring true. Looking elsewhere I discovered another two, a sleuth or a sloth which are commonly used for bears (and pandas are true bears). I like the sound of those especially looking this adorable group of five. They look as though they are having a powwow maybe these are panda detectives sleuthing to where the bamboo has been taken or maybe they are just relaxing sloth like.

This card of Giant Pandas, came from Claudia in China.  I wonder if this group is in the Sichuan Sanctuary, an area of China where they also live wild in the mountains. As is well known they are an endangered species, just one step behind the mountain gorilla which is critically endangered. Both species have problems because of habitat loss and things do not seem to be getting better in this world of ours. 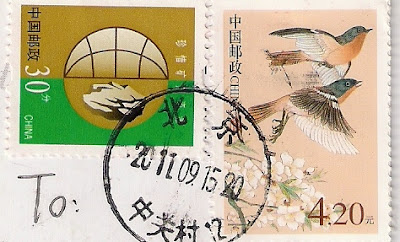 not only the pretty 2002 Asian redstarts stamp but one of the "Protecting the Common Homeland" set of stamps from the same year. At first I thought it was a man's face in the word 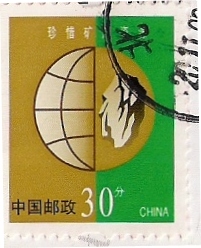 and puzzled about its significance.  Flipping it the right way round it all became clear when I looked up its theme - 'Mining resource utilization and management', yes its a lump of rock/ore.


Thank you Claudia, yes I think the pandas are pretty cute too
Posted by Joy at 00:34

wow! Not that's what a thoughtful collection.
Read of of your posts, will drop by later for more.
Love the details you put with those cards and stamps.