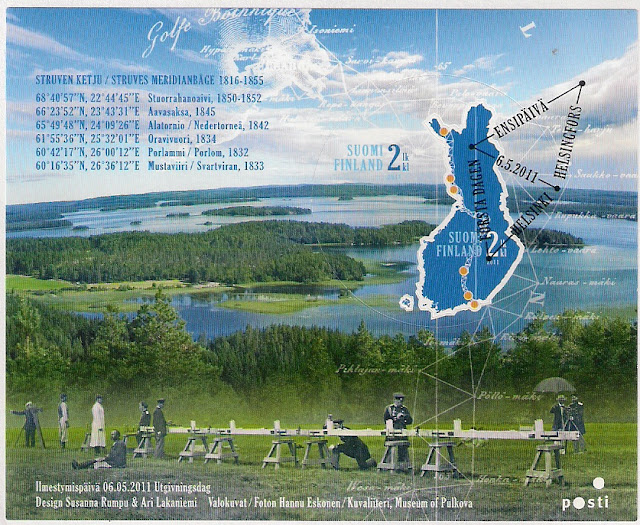 I think this must be my favourite miniature sheet; it portrays scientific endeavour but in the stunning setting of the forests and lakes of Finland. I love all the activity going on, including sitting down.   The sheet contains 2 se-tenant stamps with the marvellous Finnish philatelic imagination of one consisting of the large circle surrounding the map and the other the map itself. (the circle does not show up too well on this scan but you can see the two denominations)   But back to the scene and the horizon curving in the distance which is appropriate for this is a commemoration of the measuring of the Struve Geodic Arc. An internationally organised meridian arc survey which influenced the future development of science and helped establish the precise shape and size of the Earth.  The 2,822 kilometre arc stretches from the Arctic coast in Norway to the mouth of the River Danube at the Black Sea.  The measurements were carried out from 1816-1855 under the leadership of the astronomer Friedrich Georg Wilhelm Struve from the Dorpat (Tartu) University in present day Estonia.  Today the line passes through 10 countries (Norway, Sweden, Finland, Russia, Estonia, Latvia, Lithuania, Belarus, Moldova and Ukraine).  Just imagine all that triangulation measurement, there were 258 main triangles with 265 main station points. 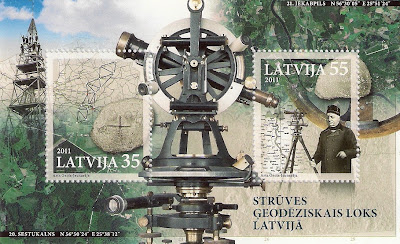 Latvia's miniature sheet features the measuring instrument as well as a portrait of Struve, part of the large endeavour can be imagined by the tower on the left of the sheet. The other stamp is a concrete marker post which I think must be a nod to 2005 when the measurement chain was designated a UNESCO World Heritage Site with 34 commemorative plaques or built obelisks out of the original 265 main station points which are marked by drilled holes in rocks, iron crosses, cairns etc. 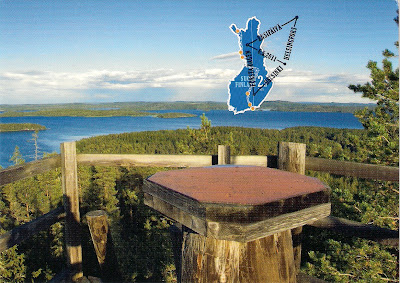 How fascinating and such a wonderful set of stamps. I hadn't heard of Struve before today. I wonder if anyone used the circular stamp separately. It seems a shame to break the sheet but it would look great.

I never heard of the Struve Geodic Arc before. I just looked it up and see that Estonia has a 2011 souvenir sheet too.

This is really educational. I knew about geodic surveys but had never come across Struve before. Great stamps and a post to remember. Thanks, Joy.

Gosh there is so much to learn reading the Sunday stamps! Beautiful sheets and postcards. Every time I find myself saying what great stamps Finland has.

Wow, you learn so much every week. I have seen this stamp with the pattern across it, and did not know what it represented. Now I know. thanks so much for participating.

Cool! Some people were really smart...