The Royal Mail is gearing up for the 2012 Olympics in London, I've lost count of how many sets of stamps have been issued so far but think this latest issue is the most successful, the others were rather uninspiring. These seem to capture movement, wind in the sails, leaping over bars, blocking balls, crashing into each other and wrestling to the ground. One of the fastest selling tickets for the paralympic games was wheelchair rugby, when it was first invented in Canada it used to be called murderball, a game not for the faint-hearted.

The rest of the set. The gymnast designer was Kathy Wyatt whose speciality is anatomical drawings and Adam Smith who designed the triathlon stamp also has a 60 ft mural of the stamp in his home town of Leicester. Each stamp is illustrated by a different person and I think this has been rather successful.  The Olympics is for athletes at the peak of their game but sport is for all and what better country to celebrate this than Australia 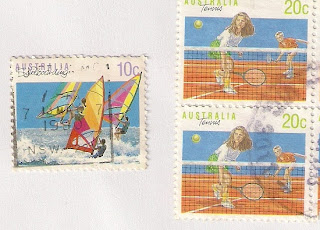 who issued an extensive set of sporting stamps in 1989.  As we imagine the sun shines all day long in Australia those of us in the northern hemisphere thoughts turn to winter and maybe winter sports, which 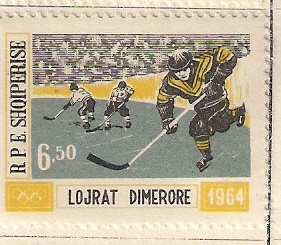 in Albania it appears to be ice hockey. The event was the Winter Olympics in Innsbruck,  And finally, as requested by our hostess Viridian Postcard 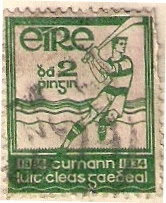 the stained glass artist and illustrator Richard King's design showing the sport of hurling. The video of this fast and furious game is on my original post to Sunday Stamps here

An entry to Sunday Stamps whose theme this week is Sport, Sporting Events and Venues

I am looking forward to the 2012 Olympic Games. I already have the mascot at home and hope to receive some Olympic stamps through postcrossing!

I'd agree with you that some of the Olympic stamps haven't been very inspiring, but I especially like the gymnastics one. I always think of Australia as the land of sport.

I must be missing out on the London Olympic stamps as I have not seen one in use yet. Too many being issued nevertheless.

I think it is interesting to see all the different styles of artwork on the London Olympic stamps, but some are more impressive than others, and they clash when seen together.

It is interesting to see the different artistic styles of the 2012 stamps. I rather like the variety. Just as it is in the Olympics.
I used to work at a facility that specialized in fitness and life skills for the disabled and was fascinated to watch the wheelchair basketball and rugby which, as you say, at the time was called murderball (for good reason, I thought!)

Thank you so much for reposting the link to the You tube hurling video! ANd a great selection of stamps. thanks for participating.