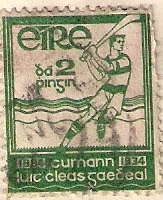 This week's theme of Sunday Stamps is anything Irish, and what could be more Irish than the game of Hurling. Its origins older than the written word. The above stamp was issued in 1934 to celebrate the 50th Anniversary of the Gaelic Athletic Association. The organisation was formed in 1884 to support Irish games and culture, politics of course was never far away.   The first Hurling Championships being played in 1887 with 8 counties participating.   Ireland and the sport has changed greatly since these times 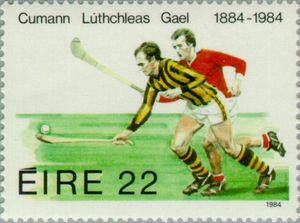 and in 1984 the association celebrated its centenary. Hurling is called the fastest game on grass, and despite its similarity to hockey and shinty  the ball (sliotar) is rarely played on the ground.  The All Ireland Hurling Final is traditionally held on the first Sunday of September, the most successful teams are Cork and Kilkenny.  An exciting and skilful game, the spectator sees end to end action.  I think the 1934 stamp captures the action beautifully, but for video action here is one from You Tube:

A fabulous game to watch. It amazes me that more people don't get hurt. I just played hockey for 28 years and that was sometimes bad enough. Your 1934 stamp is superb.

It amazes me they aren't obliged to wear protective headgear. the first stamp really does capture the movement much better than the later one.

amazing post...that footage is superb...makes even quidditch look like a slow game!

The 1934 stamp is a very nice design. I never heard of hurling or shinty before.

Wow I am glad I watched the video. Imagine being a ref. imagine if the field were muddy, which must happen sometimes.
Oh yes, great stamps too1 Thanks ofr participating.

Wonderful stamps. That game was really fun to watch. I wonder if it's hard for the people in the stands to keep track of the ball.

Can you find a matching stamp for a postcard made from your banner image? Wouldn't it be a cool maxicard? :)