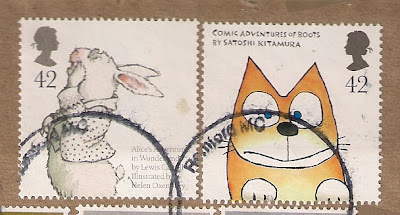 I am spoilt for choice for this weeks Sunday Stamps theme "Children's art work on stamps or stamps that would appeal to children". The children's art work that appears on our stamps tend to be at Christmas and I'm in the mood for Spring so that is an easy decision.  The stamps above were issued in 2006 called Favourite Children's Book Animals. The set was a joint issue with the USA but the two sides of the pond had different animals. with the exception of two, the hungry caterpillar and Maisy mouse,  I'm showing a character from one of my favourite books, Alice in Wonderland, the white rabbit and one I have not read, Satoshi Kitamura's Comic Adventure of Boots. I like the sound of one of Kitamura's other books, When Sheep Cannot Sleep. I can imagine that as a Shaun the Sheep adventure.

We seem to have had a run of imaginary characters in recent stamp issues, Wallace and Gromit at Christmas which I loved, even though they were rather small,  Gerry Anderson's Thunderbirds and Joe 90 in January (no strings showing) and coming up on the 8th March Magic Realms featuring, King Arthur, Harry Potter, Discworld and Narnia.  But the ones I have chosen are another of my favourite characters, issued in October last year, the Adventures of Winnie the Pooh, not the ones I have shown before here but the miniature sheet which tells a story 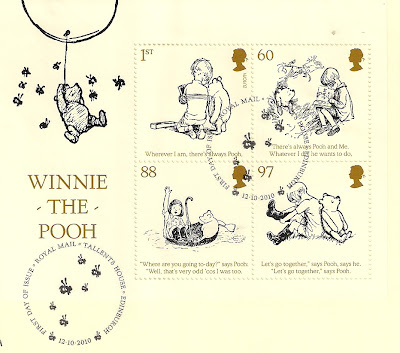 EH Shepherd  illustrated the original books with these drawings, using his son's teddy bear called Growler as a model for Pooh. Words and drawings, the perfect book for any age.


"When you wake up in the morning, Pooh," said Piglet at last, "what's the first thing you say to yourself?"
"What's for breakfast? said Pooh. "What do you say, Piglet?"
"I say, I wonder what's going to happen exciting today?" said Piglet.
Pooh nodded thoughtfully.
"It's the same thing," he said.

Viridians Postcards is the hostess of Sunday Stamps

Is the white rabbit whispering something to the Queen? :-)
All of these characters are adorable.
Thanks for participating.

I love your stamp selections! I am familiar with them except for the Japanese one.

Oophs, I've been distracted by your Redcar post which is near to us at Yarm.

I seem to have drawn a blank on the UK stamps this week as I don't remember these. Must be because no one writes letters anymore.

We are what we eat? Mmm, nuts!
Winnie is not that much part of my youth...
Iron Curtain. :)