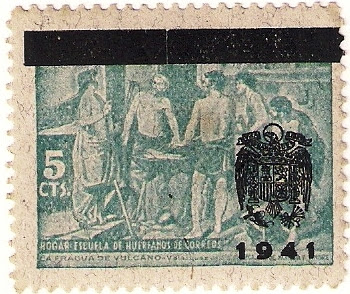 If one cannot make head nor tail of a stamp generally you know what country it originated from. Not in this case for it is hidden under a deep black stripe.  I found this amongst a mixed bag of stamps, so no clues there. Being a bit nerdish I can't mount a stamp in an album if I can't put it in a context so had to look for another clue, otherwise it would have to continue to languish in the bag, but at least it used the Latin alphabet so maybe that would be a starting point, plus the date of the overprint, 1941 (the coat of arms meant nothing to me).  The first clue was the bottom line which of course I typed into the search engine and it told me that this was a painting by Velasquez 'Vulcan's Forge' so we may be in Spain.  A bit of Google translate and the other line came up 'Home and School for Orphans'.  Hey ho that didn't help much but to cut a very long search story short it turned out this was a stamp issued in 1938 during the Spanish Republic (Popular Socialist) as a charity stamp (hence the School for Orphans) but after the end of the Spanish Civil War, and later in 1941, the remainder were overprinted with the black bar to delete the inscription 'Republic Español' by Franco's government but were never issued.

that hammer and sickle may be a clue although they came out of an old stock book which consisted of countries starting with the letter A, well that rules Russia out, or does it?  These are stamps of Armenia which mark the start of a  brief period of calm after the turbulent years  of conflict and genocide under the Ottoman Empire when in 1922 they became the Soviet Republic of Armenia, and part of Russia (things would deteriorate after the death of Lenin).  These stamps of 1922 were in fact not officially issued without having surcharges of gold kopeks in figures so are a bit of a Cinderella stamp.  On the left is a mythical beast on a wall sculpture from the ruined medieval city of Ani and of course the other is the Soviet Symbol on a design of an old Armenian manuscript. 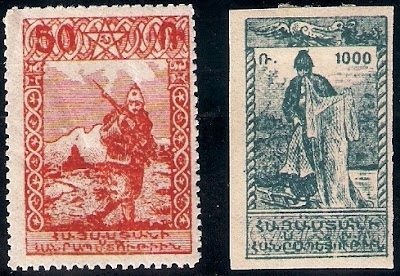 The other stamps of the set I have are less mysterious, an Armenian Red Soldier and a Fisherman on the River Aracs.

But enough of conflicts, I'll finish with a more modern Swiss stamp but won't leave you puzzling

An entry to Sunday Stamps II theme - Oddities (the unknown, unusual or strange) - more randomness here at See It On A Postcard 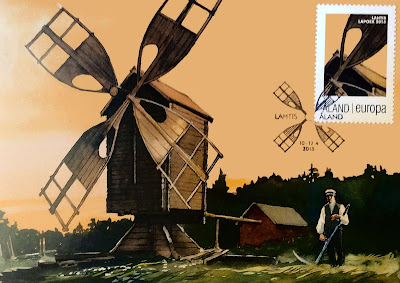 As the sun sets a farmer rests on his scythe and is now ready to winnow and grind the grain into flour.  Every year Åland Post attends about 16 international stamp exhibitions and celebrates the fact with stamps and cards on a common theme.  This one is from the Lapoex National Stamp Exhibition in Lahtis, Finland.  It shows a Post Mill which was operated by a group of farmers or in remote areas owned and operated by one farmer. They date back to the late 18th Century but the ones that survive in the country are from the 19th Century. 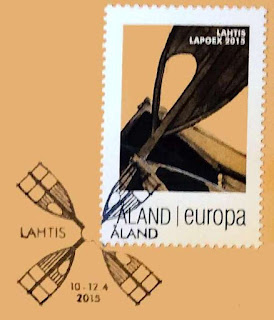 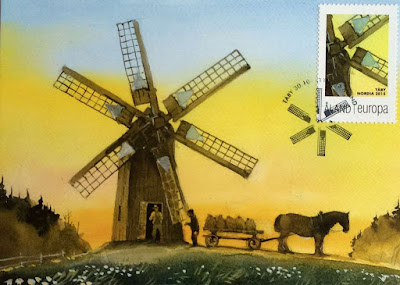 and the Nordic Philatelic and Postcard Exhibition in Täby north of Stockholm.  This one looks a bigger affair altogether and seems to have a miller in place.  Is it early morning or evening? I will let you decide. 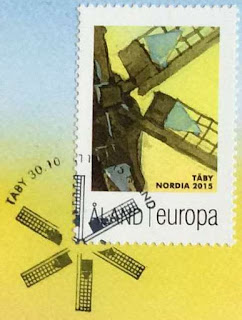 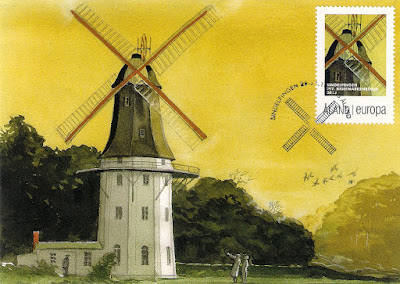 but brick or stone.  This we call a smock mill which gets its name from the shape of smocks that were once worn by farmers.  In German it is a Galerieholänder which I think translates as a Gallery Dutchman.  (Unfortunately Åland Post did not attend any Dutch stamp exhibitions so no paintings from the home of the windmill)   It looks as though a couple are taking an evening walk and admiring the windmill as the birds fly home and the windmill custodian appears at the side. This is from the International Stamp Exhibition in Sindelfingen a town near Stuttgart.  Take a trip from here up to Lower Saxony and a whole range of windmills can be enjoyed at the International Wind and Watermill Museum. 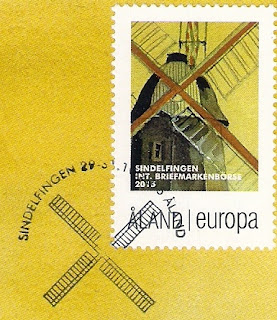 The postcards and stamps are by the Swedish illustrator and writer Tord Nygren (b1936) and the full set are little vignettes of windmill life from Scandinavia, Europe and Asia, the old to the modern set in landscapes with changing skies.

Red is the Colour

There is a certain lack of hearts and flowers among my collection when I try to theme 'red' with Valentines Day but starting with this vibrant stamp may just do
Saying it with flowers, a gerbera daisy symbolises happiness and was sent to his sweetheart
across the seas from her beau (she can't resist a uniform)
and beguiled him with dance
and long telephone conversations (while he was out saving the world from the Mysterons).
An entry to Sunday Stamps II theme - the colour red - see red on See It On A Postcard 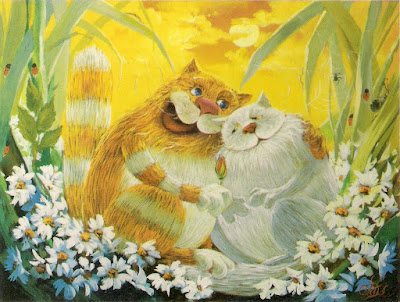 What more appropriate card for this weekend than these two loved up cats forming a heart. The card called simply 'Love' came from Yulia in the Ukraine who attached these stamps. 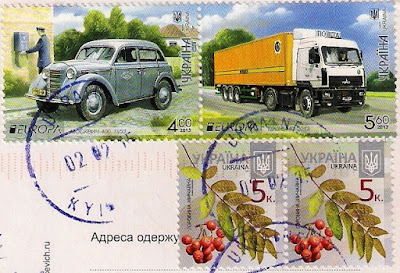 One of my favourite Europa stamps from 2013 featuring a Moskvich 400 complete with postman collecting mail in 1953 and a little cottage in the background. Coming up to date the other stamp of the set is a large postal van, the MAZ-5440 which are built in Minsk, Belarus.  All in all this is a perfect set of stamps for me because the other stamp shows one of my favourite trees, the Rowan (Sorbus aucuparia) or Mountain Ash which can be found from sea level in gardens to high on mountain sides, striking in autumn when its branches are full of brightly coloured berries.  For its more magical aspects see here  (Stamp first issued in 2012 as  part of the Flora -Trees series)
Posted by Joy at 00:09 No comments:


This cover is a real collaboration for it combines the talents of Sweden Post's in-house engraver Lars Sjööblom (who has been engraving stamps since 1982), the graphic designer Beata Boucht and 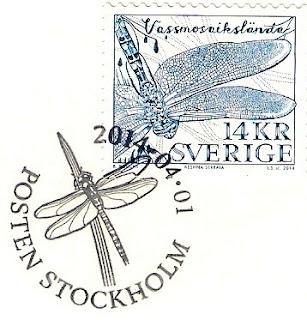 the cancellation is by Carina Länk.  I think they all live in Stockholm so meeting up would be easy.  The Baltic Hawker (Aeshna serrata) is one of twelve different hawker dragonflies found in Sweden and also one of the largest (wingspan 10 cm) and can be sighted from Skåne up to Uppland and is even the official insect of the Närke province in south central Sweden.  The Swedes have many folk names for the Dragonfly such as Trollslända which means hobgoblin fly, maybe it sports with their elves, trolls and brownies in forests.  There is also a legend that the devil weighs souls with dragonflies.


The Swedish speaking Åland Islands probably have the same legends or maybe even more. Here is another Hawker
which in England we call the Southern Hawker (Aeshna Cyonea) but in Swedish it is the Blue Darner which I guess is from their other folk name, the Devil's Darning Needle and the legend that dragonflies can sew up your ears or eyelids while asleep as punishment for wrongdoing.  In the real world they like small ponds but hunt away from water and "can be found hawking woodland rides well into the evening". I love the expression 'hawking woodland rides' for it brings to mind their determined and darting flight as they flash along footpaths and hover over vegetation. This species is also is one who is curious of people and will fly close to inspect the interloper before continuing with its patrol. 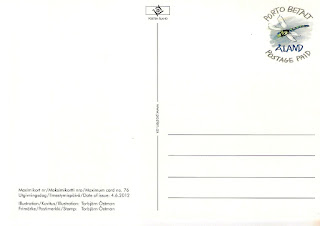 The Maximum Card is a prepaid postcard with a little watercolour dragonfly that almost looks like a piece of marginalia.  This Blue Darner/Southern Hawker is not found where I live but this one is 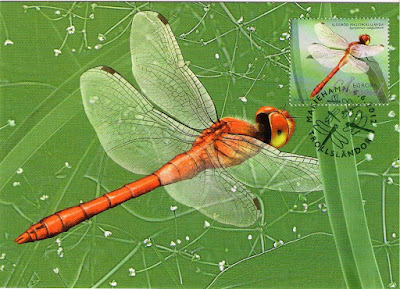 the Ruddy Darter (Sympetrum sanguineum) found by weedy ponds possibly perched on vegetation scanning for prey.  The artist of the two cards and stamps is the illustrator, artist and sculptor Torbjörn Östman 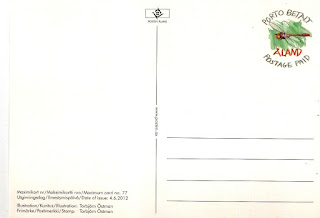 I enjoy the work of illustrators in field guides but with these philatelic examples they can also indulge their artistic side combined with scientific observation.  An old guide I found in a second hand book shop is a translation of Louis Figuier's The Insect World published in 1868 which features the life cycle of the Dragonfly on its frontispiece. Figuier intersperses his scientific descriptions with moments of lyricism and says of dragonflies:


"They may be seen fluttering about on the water during the whole summer, especially when the sun is at its highest. They fly with extreme rapidity, skimming over the water at intervals, and escaping easily when one wishes to catch them. Nothing is prettier than a troop of dragon-flies taking their sport on the side of a pond or on the banks of a river, on a fine summer's day, when a burning sun causes their wings to shine with the most vivid colours"

An entry to Sunday Stamps II theme - Illustrations -  for more stamp finds See It On A Postcard
Posted by Joy at 12:34 5 comments: