The stillness of of a rolling mist coming in off the sea with perhaps the sound of fog horns and the gentle chime of buoys at sea is what these two stamps bring to mind.  The first is the wooden lighthouse near the harbour of Oslo by the whale shaped rock of Kvringen on the western seaward approach.  The island is now a protected nature reserve together with the surrounding area of shallow reefs. The tower dates from 1892. 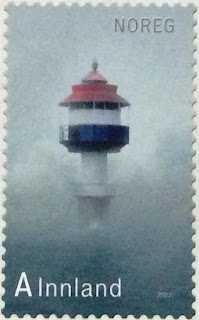 A sunken rock in the middle of Oslo fjord is home to the 1876 Medfjordbåen light.  As might be imagined the Oslo fjord is Norway's busiest and the ferries and cargo ships are joined in the summer with all manner of recreational boats. One of the recommended experiences for the tourist is to go island hopping by ferry on the fjord.  Islands of course must mean lots of underwater hazards so there are a lot of lights on the fjord (map of them here) 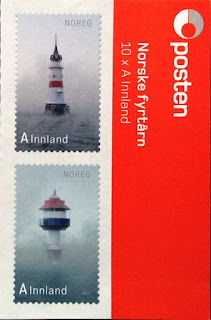 The self adhesive stamps come in a booklet of 10 and  are designed by Benjamin Stenmark. 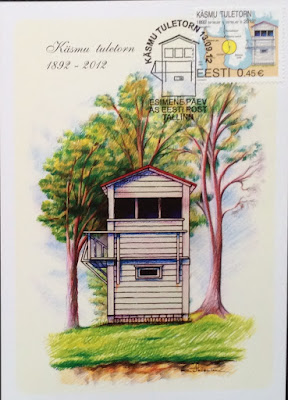 Wooden lighthouses are unusual to me as ours tend to be sturdy stone structures but here is one at the top of Käsmu Cape in Estonia.  This is one of two preserved wooden lighthouses in Estonia and the maximum card celebrates its survival from 1892-2012.  In 2013 it opened as a museum.  This beacon was originally put in place to make sailing into the home port for the Maritime School pupils easier. 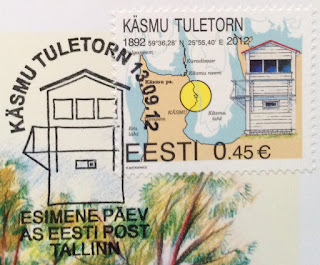 The stamp shows the position of the beacon and its latitude and longitude, then on the back of the card 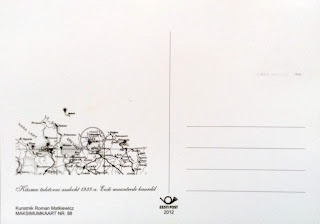 is a map of it in its wider context.  The village of Käsmu sounds like an interesting place with its hiking and cycle trails, sea museum and even a replica Viking longship. 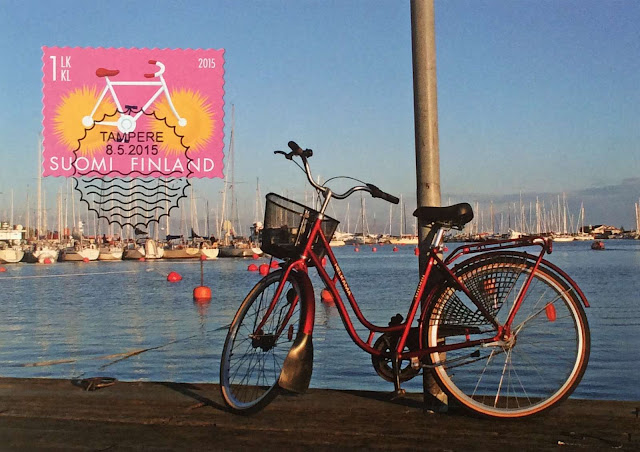 An envelope plopped through my letter box on Friday and one of the things inside completely changed what I was going to show this week.  A bike bathed in sunlight by a lake, perhaps its owner is relaxing nearby with friends after a leisurely ride or even out sailing on the water. The card is called 'Summer Bike' and and has one of this year's 'Summer Feeling' stamps with whirling fluffy flowery suns. The card features a Jopo bike (a bit of a cult classic in Finland) which was first produced in 1965 and "designed for fun" by the company Helkama.  Still popular today it is handmade from Finnish steel with 24" wheels, pedal brakes and no gears which means there is not a lot that can go wrong. 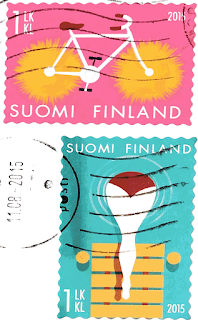 The stamp is one of five designed by Pietari Posti encapsulating a perfect dazzling summer's day with rowing, swimming, bike trips, ice cream and strawberries (full set shown here).  The appropriately named Posti graduated from Lahti Polytechnic in southern Finland but now lives in Barcelona, no doubt an excellent move if you want to guarantee perfect summer weather.  Finland seems to be having the same unreliable summer as us this year with cooler than usual temperature

I have heard of a few families who gather mid year for their Christmas because of the logistics of the mid winter festival when it is impossible to be in two, three or even four places at one time.  An eminently sensible idea with no pressure and a calm shopping environment to gather the ingredients for a Christmas dinner.  I was rather lacking in stamps featuring food so I'm joining that mid year idea for Sunday Stamps and in fact would happily munch my way through most of the items shown at any time of year.  The stamps are by one of Jersey Post's favourite artists - Michael Pollard and he has captured the season perfectly with its dusting of white.

We start on the top row with 40p Christmas Pudding (traditionally made five weeks before Christmas) and so stodgy could be a meal in its own right. 45p Mulled wine which I don't really like but those mince pies would go down a treat 50p Gingerbread shown here hung on a Christmas tree and of course the season would not be complete without 55p the Christmas Cake.
Bottom:  60p Stollen or Christollen a fruit cake which seems to have been adopted in recent years, we must have been thinking ah well we pinched that Christmas tree idea from Germany what else do they have. 68p Mixed Nuts and the time for the nutcracker to make an appearance 88p a Gingerbread House, another German import and lastly 95p the Yule Log cake.

All we need now is some alcohol 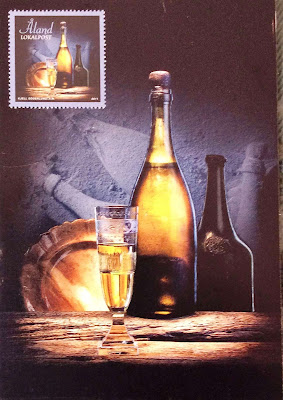 This is some very old champagne found at the bottom of the Baltic Sea in the Åland archipelago, July 2010.  The 145 bottles consisting of  Veuve Cliquot, Juglar and Heidsieck have been dated to 1840.  The stamp was issued on the day two of the bottles were auctioned off on 3rd June 2011.  Eeva wrote on the back of the card ""It is still drinkable, they say"


An entry to Sunday Stamps II theme of - Food and Drink -see more to feast on here
Posted by Joy at 10:43 5 comments:

The only place Royal Penguins breed is on Macquarie Island (which lies halfway between Australia and Antarctica) and nobody knows where they all go for the rest of the year but here is an all action group paddling up an island stream. I like collective nouns so technically this group of penguins being on land is called a waddle, in the water a group would be a raft and young chicks together are a crèche.

Journey through stamps to a radically different environment, the Australian rainforest 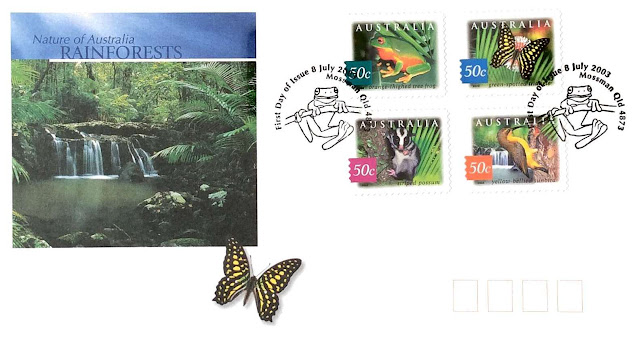 This is the vast wet tropical rainforests of North Queensland on the north-east of Australia. The Post have chosen an important habitat for flora and fauna, Daintree National Park, where some of the species here are found nowhere else on the earth. 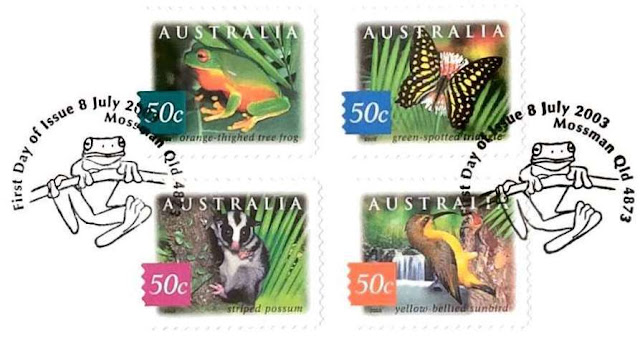