Norway's postal services were celebrated in this set of stamps and they start with a post peasant (postbonde) setting out across a snowy expanse in 1647, possibly a more comfortable journey was to be had in the early 20th century in the fjord boat Framnaes which carried post, passengers and cargo.

A full load setting off, or arriving, in this truck of 1920.  The coastal air routes from Bergen to Tromsø were served by a Junkers Ju 52/3m seaplane operated by DNL in the 1930s. The aircraft took its name from the companies bird logo - The Tern (Ternen) but it soon became obvious that a small plane could not cope with the demand, there is certainly more

mail going by rail here in 1950.  Travelling the last miles is the rural postman delivering the mail in 1970. 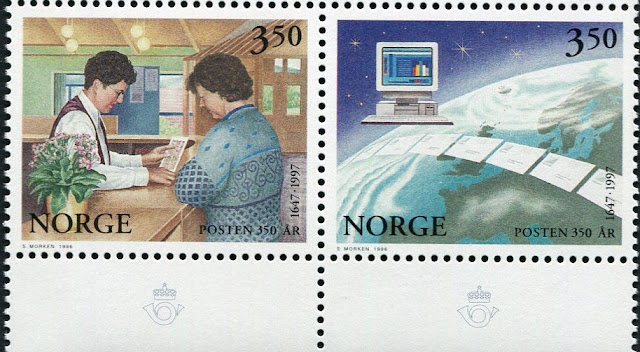 No decorative pot plant in my local post office but they are selling bedding plants at the moment and so I queued up in-between people holding both post and plants this week.  Lastly a stamp described as electronic mail which I guess could be digital stamps.  The stamps were also issued in a special booklet in anticipation of NORWEX 97 held in Oslo whose linked theme was postal history and aerophilately. 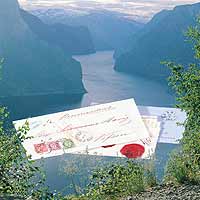 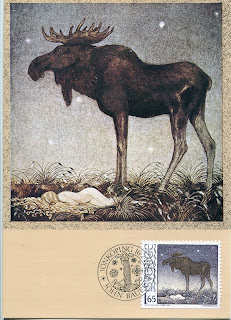 Skutt the Moose has carried the Princess Tuvstarr here and now he watches over her, the caption on the reverse of the card says "Now the dusk of the night is already upon us".  The scene is from the story 'Princess Tuvstarr and the Fishpond'.
The illustrator and the booklet of stamps issued in his memory is the Swedish painter of nature and mythology John Bauer (1882-1918).  The postmark shows Princess Tuvstarr's long wavy hair.  Her name translates as Princess Cottongrass and the story can be found here.  I know cotton grass by its other name, Bog Cotton, and just a few days ago as I wandered through the nearby mosses their dazzling white fluffy heads were growing in profusion in that watery place. I always love to stroke their soft heads but after reading the tale of the Princess and the fishpond I will think of her story while doing so.
As can be seen on the stamp Europeans tend to call these magnificent animals elks (which would be no use whatsoever for this week's letter), but happily in North America
they are Moose although I tend to call them moose anyway, maybe it is the influence of watching the squirrel/moose duo of the cartoon series Rocky and Bullwinkle as a child.  I love the beady eye of this Canadian moose on the stamp.  Moose love to wander and eat but highways and mammals don't mix so if in moose country take care.
A 'fancy elk' warning sign is part of  a Swedish set of 6 stamps 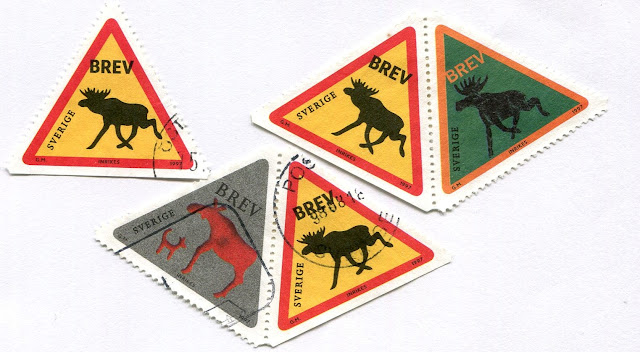 which were issued in the shape of a hexagon. On the left is the yellow Swedish road sign. The postally used stamps are usually seen as ones or two together depending on letter (brev) cost. The red elk is an ancient Nordic elk and a Forest Elk moves across a green background.

Instead of DNA this moose has a barcode (the Swedes call them line codes) I love the detail of the numbers on the bottom but I don't think we will be scanning this through the supermarket tills. Lastly we have a Swedish elk using the blue and yellow of their flag.


Sunday Stamps II prompt this week is the Letter M - here for Myth, Moose and mammal - move over for more at See It On A Postcard

A warm glow in a winding alleyway called Schönlaaterngasse (Beautiful Lantern Alley) in central Vienna. The beautiful lantern in question is outside number 7 but the original wrought iron creation  is in Vienna's City Museum and only a copy shines here. The Schönlaterngasse has appeared 4 times on Austria's stamps and also more excitingly for me in Carol Reed's movie The Third Man.  Shadowy people and places filmed in 1948 on location in a postwar Vienna.  Today there is a Third Man walking tour, I imagine the catchy zither sound track running for ever in my head during that, and yes the tour includes the sewers.
Meanwhile in Berlin more than half the world's existing gas lights illuminate the streets and the stamp's Gas Lamp is in the Kruezberg District but since 2013 they are being demolished and only 3,200 out of 37,000 will be preserved although there is a residents action to try to save them.
I imagine this chandelier type lamp is also gas lit and shines on what is considered one of Berlin's most beautiful squares, Gendarmennmarkt.
Of course Thomas Edison would definitely be for electric lights.  A motion picture is beaming out in the background and happily giving me another 'L' by showing a view of the Statue of Liberty.
Here the lights are on the Pont de Pierre which crosses the Gironde River at Bordeaux. Planned and designed on the orders of Napoleon Bonaparte (although only eventually competed in 1822) its 17 arches are said to be for the number of letters in his name.  Although the stamp seems to show the tram on another bridge it actually runs over the Pont de Pierre but the condition of the bridge means that all traffic has been banned since 2016 with the exception of pedestrians, cyclists and the tram-line.
Lastly lamplight leads us here to the 17th Century Royal Palace in The Hague,  one of three official residencies of the Dutch royal family and since 1984 the Dutch monarchs office for political and state affairs.

Sunday Stamps II prompt this week is the Letter L - here for Lamps, lamplight and liberty -  lots more at See It On A Postcard

These North Korean stamps were originally issued as part of a miniature sheet (I only have 3) but rather than the prosaic title from my Gibbons, as captioned above, the sheet has the words "Koguryo People who Enjoyed Riding", well they had plenty of room to do just that.  The Kuguryo dynasty lasted from approximately 37BC until 668AD and their tombs contain frescoes of everyday life and mythical creatures. The stamps are re-creation of the horses and events that appear on the frescoes 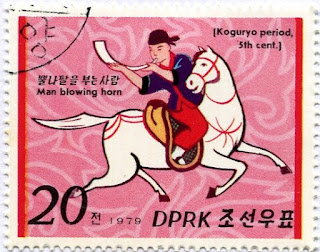 The Koguryo ruled a vast area 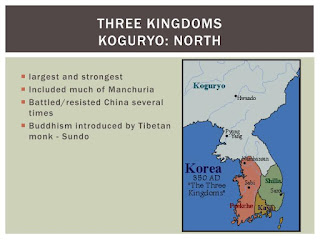 and were the largest of the 3 kingdoms of the area from which we get the name of the present country, Korea.

More people who enjoy riding are those in 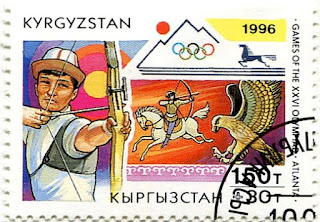 That horse symbol says to me 'fast as the wind' but everyone needs some chill out time
like this chestnut mare and foal.

Sunday Stamps II prompt this week is the Letter K - here for Korea, Koguryo and Kyrgyzstan - See It On A Postcard