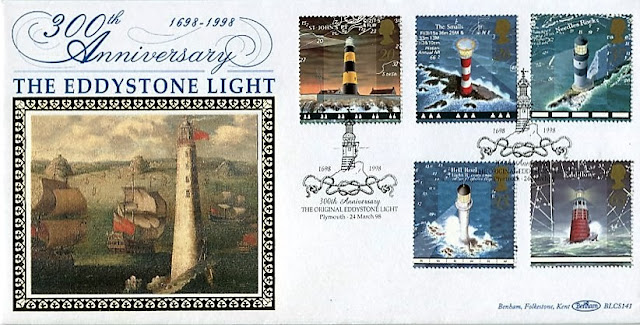 Frothing salty waters make an appearance in all the stamps of the 1998 Lighthouse set designed by Dick Davis.  Lets set off to sea and start at the top left in Ireland with St John's Point lighthouse in County Down, which dates back to 1839. Then on to Wales and The Smalls Lighthouse and then perhaps sail down the country heading for Portsmouth and up the Solent passing by The Needles Rocks with their accompanying lighthouse which today is painted red and white but the stamp shows it at the turn of the century about 1900 in blue and white.
On the bottom is Bell Rock lighthouse off Arbroath, Scotland, built at the beginning of the 19th Century.  Lastly appears The Eddystone Light which the FDC celebrates its 300th Anniversary and the stamp shows the first of the lighthouses to stand on the Eddystone Rocks erected in 1698 and built of wood. Yes you know that is not going to end well, it was wrecked in a storm 5 years later.  The FDC came with an insert which tells the story of the four lighthouses which have stood on this point warning seafarers of danger.

The painting on the cover is by the wonderfully named Isaac Sailmaker (1633-1721) and called 'Men-o-War and other Vessels before the Eddystone Lighthouse'.

Two are photographed by Kjell Söderlund and are:  Marhällen in the Bothic Gulf and Gustaf Dahlen a light which was named after the Swedish Nobel Laureate of the same name and was the inventor of the Dahlen light. If the light name is not familiar his company will be, AGA.  The other two stamps of the set are taken from old sketches of lighthouses, the first is Bogskär which was damaged by winter storms in 1889 and destroyed by German bombardment in 1915.  The replacement station some years later was painted in the Finnish national colours of blue and white and can be seen when arriving by boat into Mariehamn.   The stamp was engraved by Martin Mörck.  The other stamp was engraved by Lars Sjööblom and is of Kökarsören but unfortunately I can find no other information so unlike the other lighthouse I can provide no link.  As can be seen the exact position of each light is shown on the bottom of the stamps.


An entry to Sunday Stamps II theme - Lighthouses - set sail to See It On A Postcard for more
Posted by Joy at 11:53 6 comments:

The previous time Royal Mail issued a butterfly set was way back in 1981 but then they treated us to ten stamps in 2013.  They chose the  artist Richard Lewington, who specialises in insects, to illustrate and he talks about it here on his website.  His initial submissions to Royal Mail persuaded them not to use photographs but they stipulated that they must appear on a white background as if the butterflies were in flight.  The species chosen were a mix of the common and rare which are, clockwise from the left:
1) the Comma (Polygonia c-album) whose numbers crashed in the mid 1800s but by the 1960s they had resumed high numbers once again, sometimes described for identification purposes rather unkindly as a tatty tortoiseshell.  2) Orange Tip (Anthocharisc cardamines) of which I saw my first one of the year last week so I know the season is well on the way now. 3) Small Copper (Lycaena phlaeas) 4) Swallowtail (Papillo machaon) the largest and rarest British native butterfly who can be seen in the fens of the Norfolk Broad with their plant of choice the Milk Parsley 5) Chalkhill Blue (Lysandra coridon) found on chalk downlands and sometimes on limestone in the south of England. The inclusion of ants on the cancel above is because the larvae and pupae make secretions which attract ants and the presence of ants on bare ground gives the pupae protection at this vulnerable stage of their life cycle. 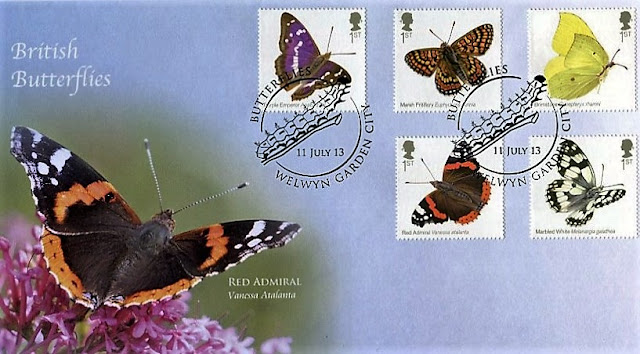 The other five of the set clockwise from the left:
1) Purple Emperor (Apatura iris) only present in southern England and always called 'His Majesty' by butterfly enthusiasts who are dazzled by its shimmering colours in sunlight. 2) Marsh Fritillary (Euphydryas aurinia) who as the name implies like a bit of damp under wing.  Their numbers can crash for no apparent reason and then recover again. 3) Brimstone (Gonepteryx rhamni), one of the few species that hibernate as an adult, the females are a paler whitish green than the buttery yellow male. 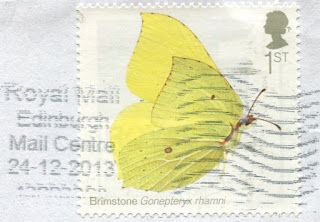 Its angular shape and veining means when it roosts it can resemble a leaf but in postal life can disappear beneath anything but a light cancel.
4) Marbled White (Melanargia galathea) whose checkered black and white can be seen in chalk and limestone grassland
5) Red Admiral (Vanessa atalanta) arrive from the Mediterranean in spring or summer.  I imagine with this year's mild winter some may even have joined the very small number that  hibernate here.


Our butterflies in the UK are small in the number of species but  now travel to a different continent and they are in abundance
and although I'm envious of that fact Africa has other insects I'm rather glad aren't around here.  The designer, J Van Nolen, has shown a group of butterflies fluttering in the air which always brings to mind summer days. These are Colotis aurigineus, the African Golden Arab. Next is the Hesperus or Emperor Swallowtail (Papillo hesperus) 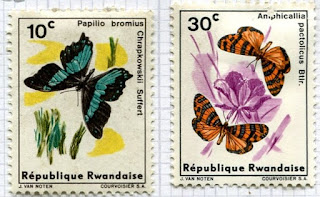 On the left is the Broadly Green-Banded Swallowtail (Papillo bromius Chrapkowskii).  Despite this set being called Rwanda Butterflies a day flying moth has sneaked in and happily and unexpectedly I can fully tick both boxes of this week's theme of Butterflies or Moths. This is the Amphicallia pactolicus moth, I haven't been able to find its common name.


An entry to Sunday Stamps II theme - Butterflies or Moths - flutter by See It On A Postcard for more
Posted by Joy at 12:11 6 comments:

In A Postal Garden

Jersey boasts that it has more hours of sunshine than anywhere else in the British Isles so no wonder it is an island full of flowers.  The flower stamps were painted by Wang Huming (who also created the FDC) and drawn by Martin Mörk.  They had first met in the past when Martin Mörk was training engravers at China Post where Wang Huming is Deputy Chief Designer.  A stamp power duo for Jersey Post.

Jersey Post quotes the Chinese saying 'Hai Kai Fu Gui' (when garden flowers bloom, prosperity comes) and mentions the symbolism of each flower in China on the back of the envelope.  I thought it would be interesting to contrast the meanings from my 'Illuminated Language of Flowers' (the Victorians were great lovers of symbolism in flowers although there is really no definitive list).  Let's start from the top stamp and the Magnolia which in ancient times only the Chinese Emperor was allowed to own and is thought to symbolise a beautiful woman.  For us it symbolises a love of nature.
Camellia: China - a token of devotion between lovers. West - depends on the colour but red is unpretending excellence which sounds rather less exciting that the white camellia - Perfected Loveliness
Azalia: China - thoughtfulness and pensiveness. West - temperance
Hydrangea: China - love, gratitude and heartfelt feelings. West -  A boaster. Heartlessness
Chrysanthemum: longevity, representing a life of ease as well as attracting good luck into the home. West - the red - I love; the white - truth and the yellow - slighted love
Peony: China - prosperity, happiness and peace. West - shame bashfulness.

Whatever their meanings they are all wonderful in gardens as are
roses, which have a myriad of meanings.  I always enjoy just browsing their names in garden centres.  New Zealand chose, 1c Sterling Silver, 2c Lili Marlene and 3c Queen Elizabeth

and 8c Josephine Bruce (the one I don't have to complete the set is the 9c Iceberg). Later in 1979 and 1980 New Zealand post overprinted three roses for the increase in postage price. It's a rather nice definitive set which seems to encapsulate the country consisting of these garden roses which grow well in New Zealand (a little piece of home for those early British settlers) together with Maori artifacts, sea shells and the 'beehive' parliamentary building. 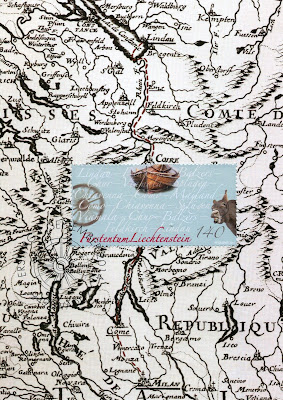 In 2014 Liechtenstein celebrated the Lindau Messenger, a courier service which journeyed from Lindau on Lake Constance to the Italian city of Milan. The countries it crossed, Germany, Austria and Switzerland also issued stamps in the same year.   The service carried mail, goods and passengers for around 500 years, ultimately finishing at the beginning of the 19th Century.   The arduous route crossing rivers, lakes and over the Alps would take 5½ days in good weather and the stamp in the middle of the maximum card lists the stops, including the highest point at the Splügen Pass (2113 metres).  The card shows a historical map of the area the Lindau Boten (Lindau Messsenger) travelled.  One of the most famous passengers who travelled with the Lindau Messenger was Goethe in 1788.
Here is another well travelled person but on a monumental scale.  David Thompson mapped nearly 2 million square miles of North America, despite loosing the sight in one eye and having a limp due to a badly healed broken leg. His fascinating story, and a first day cover of the stamp, can be found on the Hudson Bay Company website here
Another map maker, Captain James Cook who coincidentally developed his skills in Canada by making charts of the St Lawrence River and surveying the Newfoundland coast (1760-1767) but of course is most famous for his mapping of New Zealand when he sailed around the coast.  Turning west and away from New Zealand in March 1770 he was looking for Van Diemans's Land (Tasmania) but was too far north and arrived at Port Hicks in what today is New Holland in Australia and there charted the east coast of Australia 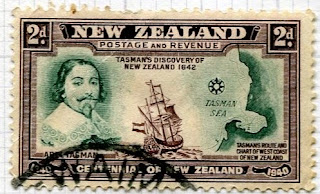 Here is the European who got there first in 1642, Abel Tasman, who task was to discover "the rich but mysterious Southern Continent" known as ‘Terra australis incognita'.  Planting the Dutch flag on Tasmania he sailed away due to bad weather and continued east to New Zealand's South Island leaving a legacy of place names.  New Zealand was shown on a world map for the first time in 1646.


An entry to Sunday Stamps II theme - Maps - journey to See It On A Postcard for more
Posted by Joy at 11:28 2 comments:

Workers of the World


There was a certain lack of May Day stamps in my collection but I did find this Hungarian one.  Designed by Sándor Légrád (1906-1983) who produced propaganda posters in World War II of a heroic and monumental nature and seems to have continued in the same vein in this view of workers.
A gathering of workers took place in Manchester when 34 delegates representing 118,000 members formed the Trade Union Congress in 1868.  The stamp is designed by the inventive David Gentleman.  I thought it would be interesting to compare how a similar concept would be presented
and this stamp for the Tenth National Congress of Chinese Trade Unions accentuates the result of manufacturing (and a nice use of the hammer and cog) rather than Gentleman's focus on the workers.

Lastly here are a couple of people working the streets of a city. Perhaps it is Stockholm.
The stamps depict two environmentally friendly modes of transport, the bicycle and an electric car (the Club Car).  The Graphic Designer is Gustav Mårtensson and the Polish engraver Piotr Naszarkowksi who has lived in Sweden for many years. The strap line on the right says "Mail on the Way".