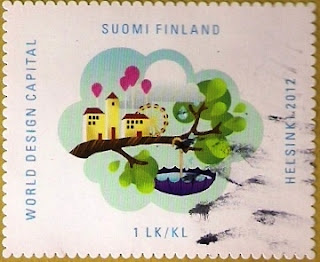 Perhaps this week's theme of 'Places to Live' would include Utopia, the title of the above stamp which is one of a set produced in 2012 by Finland called - Future City  - showing "what kind of habitat we might have one day". They were issued in booklet form 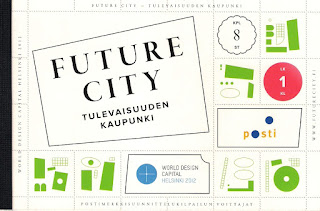 of which this is the cover. The green plans form decoration throughout the pages but I'll concentrate on the stamps issued on the occasion of Helsinki being chosen as World Design Capital in 2012.  There was originally an open stamp design competition when 1,422 entries were received from which a jury of professionals and the public selected 8 so lets get on with the stamps.  The first two are very colourful 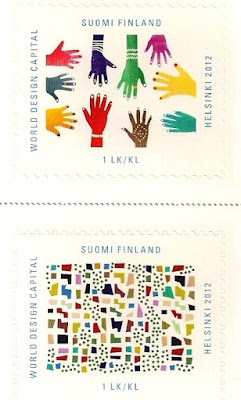 and are called simply 'Colour Power and Mix' nothing like a bit of colour to cheer a day up.  The designs are by Varpu Kangass a freelance Graphic Designer from Helsinki. The text by the stamps discusses openness  and says "For us, openness equals, transparency, curiosity, global responsibility and innovation.  In the stamp design competition we aimed to challenge people to think about their own city". 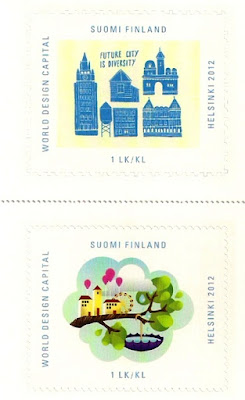 The top stamp on the next page is by the French graphic designer Chloe Chapeaublanc and accentuates the need for a diverse architecture and also possibly people.  The bottom stamp is the pristine version of the used one I showed at the top 'Utopia' (Onnela) by Sini Henttonen, then a student of textile art and design in Helsinki.


Next we have two stamps designed by children 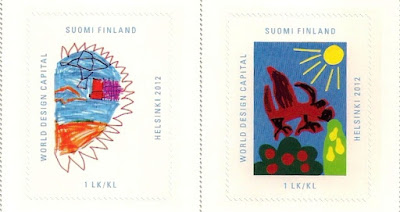 On the left Kaupungin liike (City Business) by Daniel Kallström, a schoolboy from Helsinki and the one on the right Tulevaisuus rohkeana (which I think translates as a bold future) by Elias Ollila then a 5 year old from Espoo. 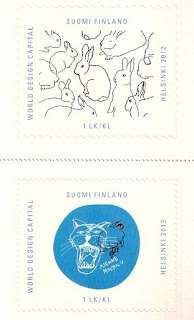 Lastly we have City Kani (City Rabbit) by Katja Hynninen, a textile designer from Tampere.  I've been lucky enough to have the company of rabbits on lawns on a number of places I have worked on industrial estates so they are well tuned in for the future city.  The bottom stamp puzzled me I thought it might be a vision of big cats roaming the streets and I didn't know how they would coexist with the rabbits, or indeed humans, but the message was more a call to arms.  Assenne muotoil which I think translates as 'The attitude of designers".  As the booklet hopefully says "Together we will build better, more livable and happier cities". 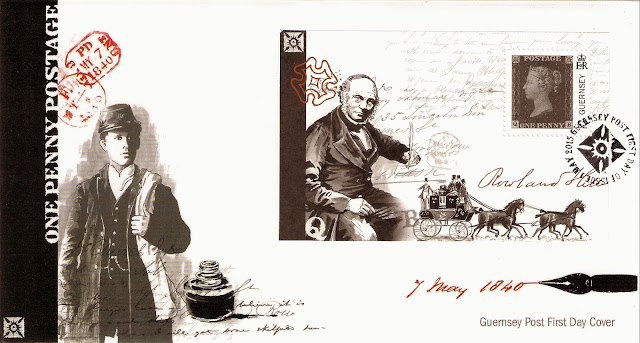 I'm combining the stamp royalty of Roland Hill with Queen Victoria in this, a recent acquisition, celebrating the issuing in 1840 of the penny black which brought the joy of post to everyone. A number of postal authorities are commemorating the occasion this year but I fell for Guernsey's action packed FDC. How could I resist a combination of pen, ink and postie with a commemorative sheet. The designer is Keith Robinson.

In contrast to the modern reproduction of a penny black lets travel to India and see those images of Victoria that were around when she was alive and the postal system was in full swing. 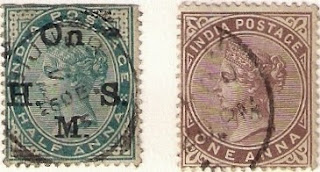 The stamps from the 1880s feature the same portrait but the one on the left with its On HMS (On Her Majesty's Service) overprint could only be used on official mail by civil servants whereas we will never know who used the one anna stamp. 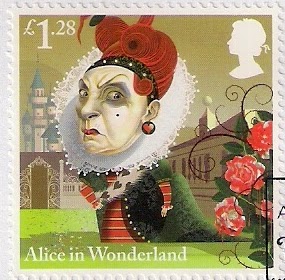 the The Queen of Hearts. It's from this year's  Alice's Adventures in Wonderland set whose 150th anniversary of publication falls in 2015. The artist is the award winning Grahame Baker-Smith

I have a number of stamps by the artist Pan Keming but this set is entirely different in style to any of the others. She is known for a simple but detailed style and I have shown her 'kites' on a previous Sunday Stamps here . I was not sure whether I liked these or not but they have grown on me as I think she was trying to capture the shady nature of their habitat in subdued colours.

All the mushrooms in the set have both culinary and medicinal uses. The stamp on the left shows the Silver Mushroom (Tremella fuciformis). It starts out as a slimy, mucous like parasitic yeast and grows as a film until it encounters its host fungi which it invades. The result is a gelatinous mushroom which is quite tasteless but used for texture in Chinese sweet desert soups and ice creams.  The Chinese call this mushroom Silver or Snow Ear but I rather like the Japanese name of White Tree Jellyfish
The fungi on the rights by contrast is quite normal and is the Bamboo Mushroom which as might be expected from its name grows in the bamboo forests of Asia after heavy rain. 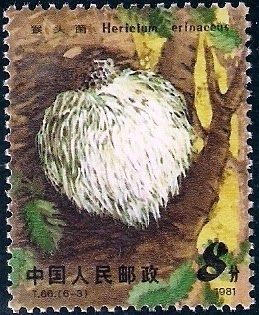 The Lion's Mane Mushroom (Hericium erinaceus) is often used as a replacement for pork or lamb in Chinese Vegetarian dishes and apparently tastes like lobster or shrimp. It grows on hardwood. 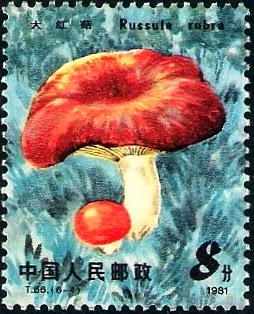 I am always highly suspicious of red mushrooms although I do like photographing them.  I would only be partly right with this one, the Russula rubra, which is called the sickener. Apparently it has a peppery taste but if eaten raw can make you ill hence its other names of emetic or vomiting mushroom. The cooking process makes it edible and apparently it is also popular in Russia. I won't be ordering that off the menu! 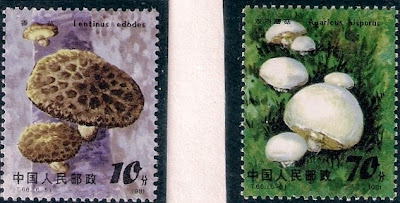 Here I am on more familiar ground as the mushroom on the left is the Shiitake (Lentinus edodes) used extensively in Asian cuisine but rarely the stems as they are harder than the cap and take longer to cook.
Lastly is the one seen on every supermarket shelf the button mushroom (Agaricus bisporus) shown in its natural habitat growing on grasslands.

I've shown the stamp on the left quite recently for the Sunday Stamp red cross theme so today is a great opportunity to display the trio designed by Jean-Michel Folon  (the other two being for the fiftieth anniversary of the United Nations). His comment made about his own art  "I have only tried to depict my own dreams with the hope that in them others may hang their own." fits perfectly with the third stamp of the United Nations symbolising the world at peace.

This set of stamps was actually called "Peace and Freedom" (I don't think I will ever be more on theme for Sunday Stamps that that!) - the other two that complete the set were very different

and commemorate the end of the Second World War with soldiers and civilians celebrating. I wonder if that was Victory in Europe Day. So much celebrating went on in London 70 years ago this week that they ran out of beer at 8 o'clock. The other stamp shows St Paul's Cathedral. 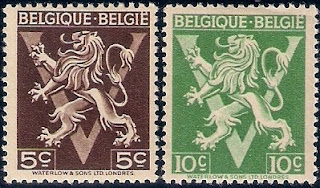 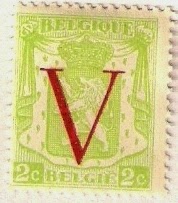 officially overprinted with a red V on the 18th December 1944 to celebrate Belgium liberation. (in reality the stamp is a paler green than the scan so you get the contrast of a very delicate green and bold red V).  The Dutch at this point were optimistic they would be next to be free and began to plan the issue of their own 'liberation' stamp, however it had to be done in secret because the Germans were still in control. 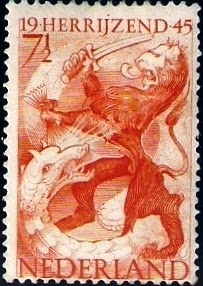 To safeguard against consequences of the design of a Dutch lion defeating a dragon being discovered it had the words "TBC BESTRIJDING (Fight against tuberculosis) on the top of the stamp as a ruse. On July 15th 1945 (the surrender of the Germans forces in the Netherlands had taken place  in May) the stamp was released as intended with 19.HERRIJZEND.45 on the top "Rise again 1945". Nearly 57 million of these stamps were sold. 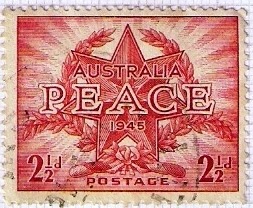 of star and wreath together with 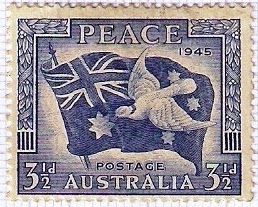 a flag and dove of peace.  Unfortunately I don't have the third stamp of the set which was a green angel even though Australia reissued this set of stamps in 1995 as a "Peace Pack"  redrawn by L. Dolan from the original designs of Frank D Manley and G. Lissenden. I like the woolly nature of the dove, it could almost be part sheep.  For a more stylised version of the dove of peace here is a German one. 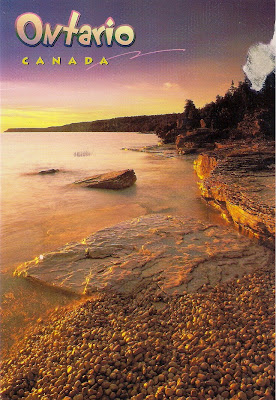 The world born anew in this view of sunrise at Halfway Bay in the Bruce Peninsula National Park. It sounds a wonderful place to visit and explore with its trails, limestone rocks, 1000 year old cedar trees and crystal clear water. No wonder then that it is part of UNESCO's Niagara Escarpment World Biosphere Reserve. When Dawn sent the card back in January from Ontario it was a sunny -8° and she had shovelled and car brushed snow to get to work.  No doubt she is now enjoying the warmer spring weather which I read is a great time to visit Halfway Bay.

The card came with
one of the three roses used for the 2014 'permanent' stamp. This is a velvety red hybrid tea rose called 'Konrad Henkel'. The stamp designer was Isabelle Tousaint who photographed many roses in the Montreal Botanical Gardens before making her choice for the stamps. Then there was Canada's first prime minister Sir John MacDonald who died in office in 1891 and his body was carried by train back to Kingston in Ontario. He has appeared many times on the stamps of Canada but this is a fine addition to their number. I love the typeface surrounding the photograph. The graphic designer is Louis Gagnon co-founder of the award winning design company Paprika.

Lastly is the stamp issued for the opening of the Canadian Museum for Human Rights in 2014. This Winnipeg based museum was designed by the architect Antoine Predock whose vision was for visitors to arrive at the ground floor symbolising darkness, move through large spaces and gradually reach the light of the Tower of Hope, the large spire on the stamp.  The stamp itself was designed by Adrian Shum of Circle Design from photographs taken by Mike Grandmaison who has a rather nice blog post about it here showing the interior and the other uses of his architectural photographs on the Canada Post's FDC and stamp booklet. There are also lots of gorgeous photographs of Canada on his main site.
Posted by Joy at 01:02 No comments: 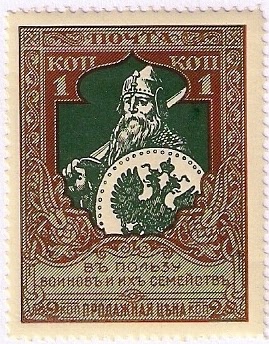 The medieval warrior and Russian folk hero Ilya Murometz was the choice for their 1914 war charity stamp (its one kopeck over face value surtax was donated to charities active during World War One). This strong and fearless warrior's name would also be used as the name of the bi-plane bombers of that same war.
Another weapon bearing character appears on a Polish stamp but this is of their first crowned king, Boleslaw the Brave. 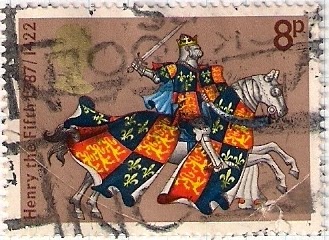 Parcels with proper stamps are a rarity these days and I have only received one in recent times and even that had no trace of a frank just overenthusiastic pen marks defacing them. Ah for the days of proper franking no matter how heavy. 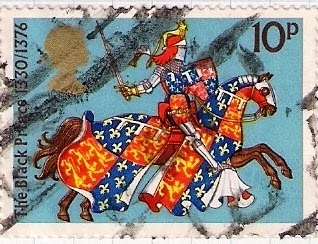 For the medieval knight war and tournaments were all part of their life but hawking and hunting were a favourite pastime and in this highly hierarchical society the type of bird they would use for falconry would be determined by class. According to the famous English  'Boke of St Albans' (1486) and its Laws of Ownership a king would use a Gyr Falcon but a prince would fly a peregrine falcon like one of these
which the stamp shows in a variety of poses. 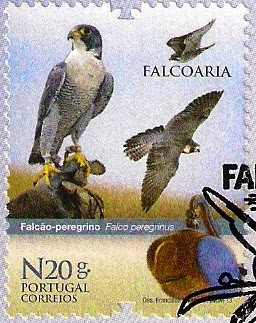