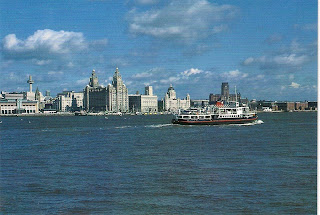 Liverpool from the Mersey
I visited Liverpool yesterday, in the rain.  If only it had been as sunny as this 'Liverpool Pictures' postcard.
The waterfront is a delightful mix of buildings, in fact Liverpool possesses some stunning architecture both modern and old.
Posted by Joy at 13:26 No comments: 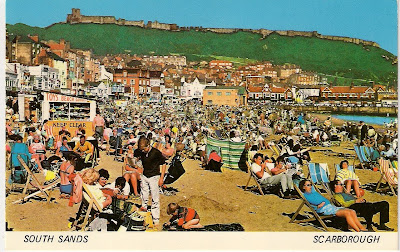 Sapphire YS2218
As we have just had more snow, why not think of summer.  Here are two postcards from the early 1970s of the South Sands, Scarborough.  The first shows the two essentials for a beach holiday in Britain, a wind break and a jumper (as worn by the small boy in the foreground).   Everybody looks as though they have settled in for the day under the blue skies and curiously there is not one person without a deckchair.
Scarborough on the north east coast of England is said to be the resort where sea bathing began in Britain. It is certainly one of the oldest resorts and was popular as a spa  in the 17th Century. 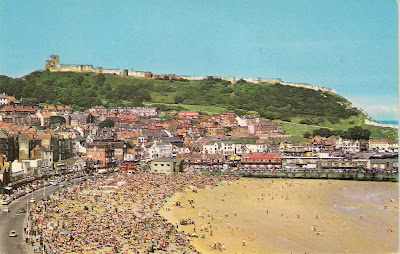 Colourmaster PT20408
On the knob of land that divides the sands of north and south bay stands Scarborough Castle built in the 12th Century by Henry Second (Henry Plantagenet) on the site of a Roman signal station. 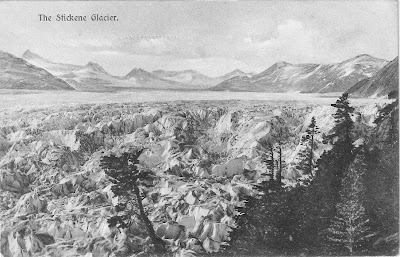 As we are in the middle of the Winter Olympics here is a Canadian postcard.  I do not have any of the Vancouver area but I do have a suitably icy one of British Colombia. This is the Stikine ice field west of the Stikine River. One of the few remnants of the once vast ice sheet covering much of North America. The terrain is almost entirely ice cap with even the highest peak sometimes barely projecting above the ice.

But what I mostly like about this card is the fact it is one produced by J Howard A Chapman (?1862-1942) who arrived in Victoria from England in 1890, and at first started to work as a travelling salesman.  He photographed a wide range of places and subjects while on his journeys.  From 1895-1912 he travelled and took photographs throughout British Columbia which is the time this postcard is from. In the years 1912-1936 he concentrated on Vancouver and Victoria and also taking pictures of people.  The provincial archives of British Columbria purchased his photographic collection from him in 1936. I would love to know where he took the photograph from, I suspect a wooded area near the coast judging from this map.

This Stikine (he spelt it slightly differently on the card) area of Canada must have been quite a trek in that era and even now I think it is sparsely populated.  One of peoples that would have been there when he took this photograph would be the First Nation people, Tahltan

and here is one of his cards, probably from his later photographs, unfortunately not owned by me, but the University of Saskatchawan, showing an "indian bride" from the Tahltan.  They were a nomadic people who hunted and fished both on the coast and inland but the Stikine River was their highway.

Visit The French Factrice for other participants in this Postcard Friendship Friday meme. 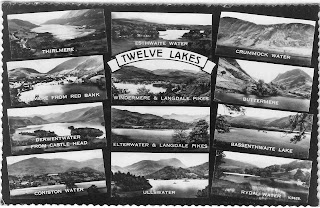 A Valentine's 'Real Photo' postcard (k9438)
Although this card says twelve lakes there is in fact only one lake in the Lake District all the rest are waters or meres. Never say Windermere Lake, it is a tautology.  So can you spot the one lake?
Well you would have to squint if you did not know already for these photos are quite small.  It is Bassenthwaite Lake, the most northerly and the shallowest at 70 ft.  It also contains a rare fish, the vendace.
Now what is strange about this card is that it does not have a picture of Hawswater.  There could be a number of reason, the most obvious being that thirteen lakes would not have fitted on the card, but Rydal Water is on the card, and although one of the prettiest stretches of water is more like a tarn than a lake.
Mardale, which Alfred Wainwright said was the most beautiful of all the valleys, was flooded in 1935 to create Haweswater, and it took until about 1940 for it to reach its level.  I think the K series were possibly published in the 1950s so it would be full by that time.  Maybe the photographer thought it not as attractive with the dam at one end, although from the hill tops it is quite a pleasing shape.
Posted by Joy at 20:01 No comments: 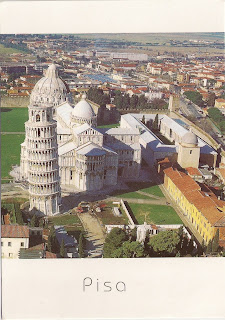 As can be seen this wonderful postcard is, as it says on the back, a "veduta aerea", aerial view. There is no question of when this photo was taken as it also has two dates on the  back, copyright 1995 and also 14.02.95 on the bottom.  If only all cards were like this.  As can be seen to the right of the leaning tower are the excavation works which even if there was no date on the card would place it at between 1990 and 2001 for that is when the restoration work was under-way to, successfully, correct the lean.

The campanile was built over a period of 177 years, first being started in 1173, but conflicts stopped work are various points, which is why, despite the suspect foundations it did not fall over, it had time to settle before the next layer was put on.

When I visited during its restoration period there was no access however the cathedral and especially the baptistery are worth a visit alone.  But it is the whole wonderful confection in perfect harmony shown beautifully in this card that makes the visitor catch breath.
Posted by Joy at 21:32 1 comment: 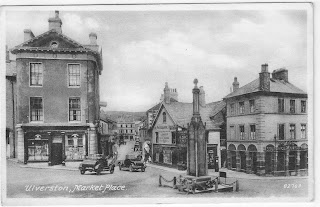 I thought I would start my first postcard post with my childhood home, Ulverston.  A small market town in North West England on the edge of the Lake District.  This is a Frith postcard number 82763 which dates it as 1929.  The war memorial in the foreground would only contain the names of the fallen of the First World War at this time.  I do like old cars in photos and these two are about to tootle down Market Street.  You could not do this today because it has become a one way street, in the other direction. 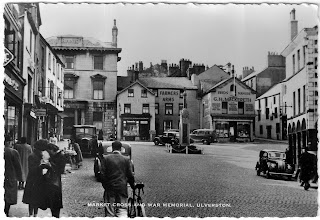 Moving on in time here is an M&L (Miller & Laing) National Series postcard which my father has estimated a date and has written on the back 'about 1957'. This is looking from Market Street towards the Market Cross. On Thursdays and Saturdays there are market stalls down both sides of this street.  Ulverston was granted a market charter way back in 1280 and indeed is an very old settlement as the town was mentioned in the Domesday Book, as Ulvrestun.

Note the cobble setts which surface the whole of Market Street. 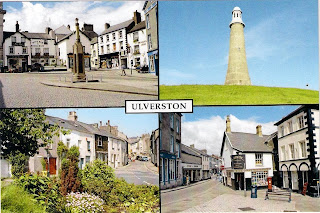 And now we come up to date.  As you see nothing has changed much to the buildings because the centre of the town is a conservation area, but judge how times have changed, in the previous postcard you can see the Farmers Arms pub, plain and simple. It still retains the name but it now has in larger letters above it Wine Bar & Restaurant.  It is a very popular eating place but don't let the words wine bar put fool you because it also serves many types of draught beer so is also popular for drinking.

The monument on the right is Hoad is a replica of the Eddystone Lighthouse and was erected in 1850 to commemorate Sir John Barrow who was born here and whose favourite walk was up Hoad Hill.  It is undergoing renovation at the moment so all that can be seen is the scaffolding around it. I'm wondering what colour they have painted it.

I do like the fact that the post box still stands in the same place in the modern card (outside the chemist, bottom right picture) as the 1929 one.
Posted by Joy at 23:32 No comments:

I have inherited postcards, been sent them and bought them. They have been put in books, shoe boxes and albums, and then forgotten. By chance I came upon a postcard blog and thought gosh I could scan and post my cards too. My second thought was A Raft of Apples is going in enough directions already to add another element to it so here I am creating another blog, and lets see how it develops. I always start off with one idea and somehow it ends up in a completely different direction but I like unpredictability so here I go.
Posted by Joy at 20:20 No comments: