Transporting people, post and products in past times are -

Taking to the water here is a three masted steamer, the Ariadne built in 1823. I thought at first the funnel was a lighthouse, then I saw the smoke coming out of it... 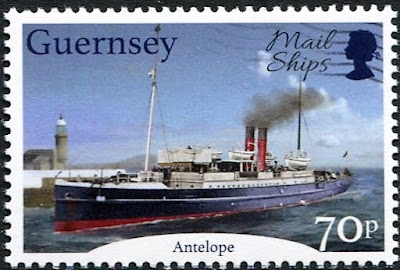 This time I can tell the difference. The 'Antelope' steaming past a  harbour light. This was the first of three ships built for the Great Western Railway when they started the Weymouth-Channel Islands service. Her maiden voyage was on 3rd August 1889

I  may have taken the Sunday Stamps theme 'issued in the 1900s' too literately I discover but enjoyed delving back to the first decade of the 20th Century. So, all aboard the steam train we are travelling in the parcels van on Belgium's extensive rail network. Almost seems a shame to use this lovely stamp on a parcel 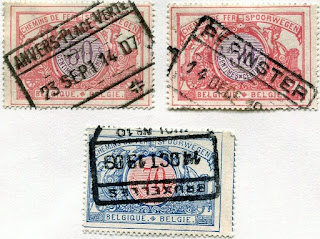 as it will get a sturdy postmark.Thwack. I enjoy the romance of all those different place names. The square oblong postmarks are the railway service cancels, the post office used round cancels. 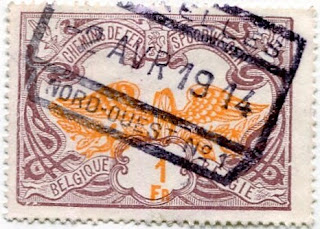 Underneath this cancel is a winged rail wheel which would become a familiar motif on Belgium parcel stamps.  I will continue my journey through the Belle  Époque and visit

Spain. These stamps were issued at the 1907 Industrial Exposition for purchase by collectors but not issued by the Spanish postal service and not valid for postage. A memento of a visit. They show King Alfonso and Queen Victoria Eugenia (granddaughter of GB's Queen Victoria).

More royalty as  Prince Carol I meets Osman Pasha at the end of the Russo-Turkish War (1877-78) also called in this context the Romanian War of Independence.  Carol was Marshal of the Russian troops and commander of the Romanian forces.

Here is Silver and if one could travel then a visit to the Kongsberg Silver Mine Museum in Norway involves a trip underground on the mine train. On the right are the unusual crystals of Cobaltite. The name is derived from the German Kobold which is a leprechaun or goblin. The story is that the metal was haunted by a kobold due to its failure to properly smelt like other metals

The High Rhon Mountains  which were formed by ancient volcanic activity

and here is a more modern eruption. This stamp was issued in aid of the disaster stricken island of Heimaey which is off the coast of Iceland. When a molten fissure opened up a mile from the town the population were evacuated by the fishing fleet.  The newly formed Eldfell volcano erupted for 6 months and to slow the lava flow and save the harbour they pumped sea water and sprayed the leading edges of the lava flow. They were successful and within a year most, but not all, residents had returned. Today's population is 4,500.

chocolate and with a cherry on top, what a delight.  Chocolate dipped strawberries (I prefer ice cream with my strawberries). The cacao bean makes an appearance and a chocolate drink, perfect for winter. 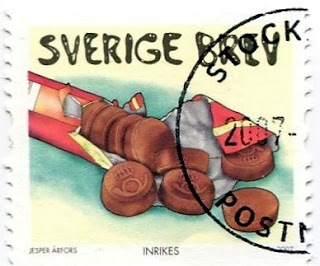 And lastly something to pop in ones bag - chocolate coil. It looks a bit like our Rolo which has a runny caramel middle - mmm - or perhaps it is something completely different. I love trying other countries confectionery.

How would we cope without these inventions and who knew, not me, that these were thanks to Sweden. The zip, ball bearing, vacuum cleaner and refrigerator.

The man behind the world's first commercially successful steamboat, Robert Fulton (1765-1815). It steamed along the Hudson River - the 'North River Steamboat'.  He also invented the first submarine 'Nautilus' but the stamp designer has gone with a more scenic view of a modern (at the time of the stamp) steam liner.

As someone who has poor night vision here is something I like, cats eyes. Invented by Percy Shaw who when driving on a dark and winding road saw the eyes of a cat reflecting his headlights. In 1934 he patented his idea and created a company to manufacture them, the rest, as they say, is history.

The 2015 'Inventive Britain' set also featured carbon fibre and the development by William 'Bill' Watt (1912-1985).  I think the stamp set is quite inventive too.

Its Summertimerelax and take it easy on the shore
or on the water.

Luxuriate in the warmth of summer. 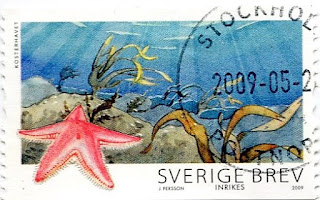 Take a dip to cool off.

There are many stories of why the Manx cat has no tail. My favourite is that they were cut off when Noah closed the door of the Ark. They also have a double layer of fur, all the better for stroking. The artist, Lesley Anne Ivory, says the stamp commission allowed her "to bring together some of my favourite things, cats, flora, fauna and the designing and making of patchwork quilts". Left - Manx Tabby with Mugwort on a Mugwort quilt; Right - Ginger and Black and White Manx cats on Fushia Quilt

Left - Manx cat and kittens with Ragwort and Daisy quilt; Right - Manx cat with Harebells on Rabbit and Harebell quilt.

If I was a cat I think I would like a long tail to curl and swish like this one.