In 1985 Czechoslovakia celebrated the brief life of Bohan Roule (3 May 1921- 10 Dec1960) by issuing a stamp to his memory on Stamp Day.  His skill combined both art and craft and is one that is little used on stamps today but is one of the joys of older stamps, engraving.  To transform a sketch, drawing or painting in addition to engraving a small stamp image on wood or metal but then to do it in reverse is an amazing skill. What is today the Czech and Slovak Republics still occasionally issue engraved stamps and continue with the tradition of inscribing the designers name on the bottom left and the engravers name on the right. This particular stamp was designed by Karel Vodák and the portrait engraved by Ladislav Jiraka, their names however appear on the vertical right for of course Bohan Roules name is in the usual position on the interior reverse view of the stamp plate (under the birds foot).  Roule was described as a "rising star" when he died at 39 having engraved 54 stamps for Czechoslovak post and 2 for Albania  One of his engravings could be showing one of the ways post is carried 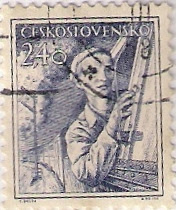 the female engine driver on one of  the 1954 definitives. 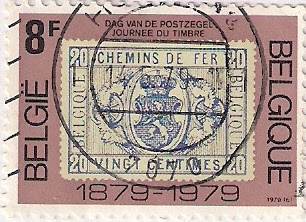 If you were in Belgium then there would be a special railway stamp to carry parcels on trains. On the 1979 Stamp Day they commemorated 100 years with a stamp on a stamp. 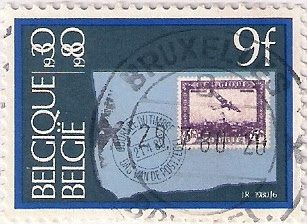 The following year it was 50 years of airmail, those blue envelopes in the past kept families and friends in contact across the world and for the young philatelist the stamp often could be more exciting than the contents 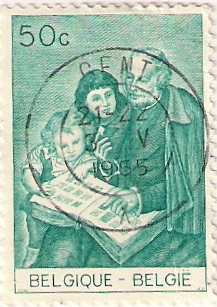 This stamp for the 1965 "Philately for the Young" has been engraved from the detail of a mural by Van den Bussche of Sir Rowland Hill with young collectors. 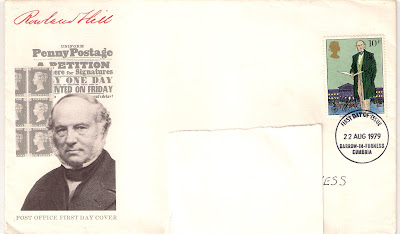 The man who started it all when mail transport looked like this:- 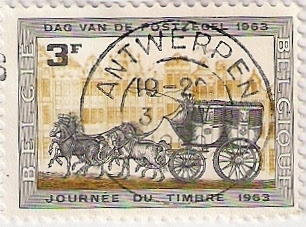 The postmark on it is where I will be next week, I wonder what stamps I will find.


An entry to Viridian Postcard's Sunday Stamps theme of stamps on stamps or all things postal. 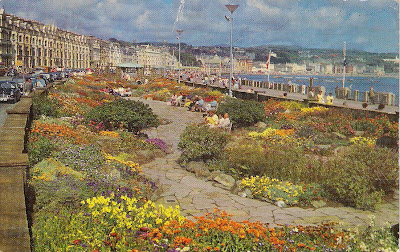 I do like municipal flower planting,  the vivid bocks or contrasting colour, and this view of Douglas promenade shows a profusion.  The card was produced by Lillywhite Ltd of Brighouse in Yorkshire, it is unsent but I would guess from the scene, cars and printing it is some time in the late 1950s.

Douglas is the capital of the Isle of Man and home to their parliament, Tynwald which claims its decent from Viking times.  The Victorian hotels on the seafront look out across Douglas Bay.  This view is of the sunken gardens on Loch Promenade where, as can be seen, one can sit in the sunshine sheltered from the sea breezes amongst the flowers.

Despite living just across the Irish Sea from the Isle of Man I have never visited but on exceptionally clear days the outline of the Isle and the little island at the end, the Calf of Man can be seen from my part of the north west coast of England.  We share the same sea 'breezes' and shipping weather forecast.
Posted by Joy at 23:23 1 comment: 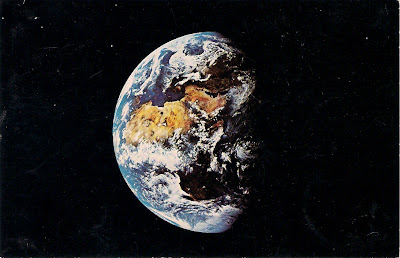 The card says "En route to the Moon the Apollo 11 astronauts took a picture of the Earth at a distance of 180,000 km (112,000 miles). The bleak orange Sahara Desert, the Mediterranean Sea, Africa, southern Europe, Asia Minor and the Red Sea show clearly. The Congo, at the Earth's equator, is buried under cloud."

A blue planet floating amongst the stars, our home.  Today is Earth Day, both a celebration and a plea to protect the environment and create a sustainable future.  Too beautiful to loose 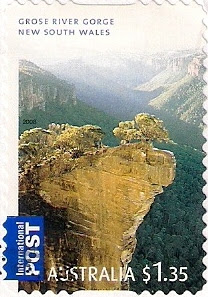 Grose River Gorge, the river over millennia has carved through the Blue Mountains and created soaring sandstone cliffs. 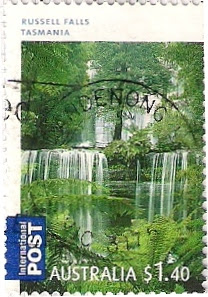 Russell Falls, Tasmania in the Mt Field National Park.  At night time glow worms light the night at the approach to the falls. 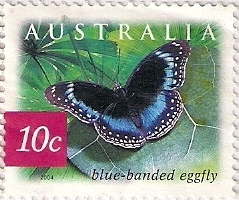 The Blue-banded eggfly, a butterfly of the rainforests

The largest rainforest in Australia is the one in Daintree National Park, north of Queensland and this 2003 flora and fauna series celebrates some of its inhabitants. 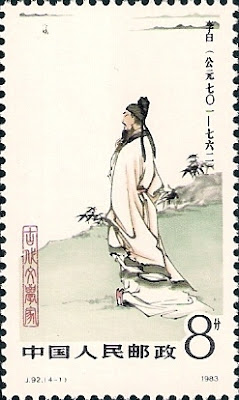 Two poets of the golden age of Chinese Poetry appeared on a set of of Poets and Philosopher stamps issued in 1983.  The first is Li Bai (also known as Li Po) born in 701, who had what is described as a "hard living life" which means he liked a drink or two;  any poetry collection of the Tang Dynasty will contain many of his poems.

The painting is a modern one created by Liu Lingcang (1906-1989) who was apprenticed at 14 and and as a young man went to Beijing alone living off the sale of his paintings to follow the masters of his chosen art.  He himself became a great scholar of painting history and painting theories and in in his 70 year art career he spent 40 teaching those skills. It is interesting to see the scroll painting he made of Li Bai which expands the view of the poet and appeared as "Landscape of Tang Poetry" 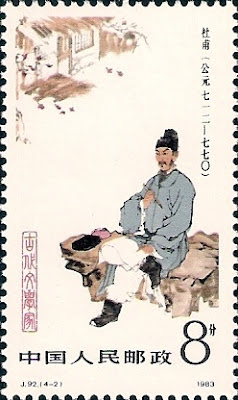 Next is Du Fu (also known as Tu Fu) 712-770 who is known in China as the "Poet Sage".  But let the words of these poets tell their own story.  They share a page in my copy of Soame Jenyns's (who was keeper of Oriental Antiques in the British Museum) second collection of translations of Poems of the T'ang Dynasty, you will see why he has done this.

"Sending Off A Friend" by Li Po

Looking north of the city you see the line of blue hills,
Sparkling water flows past the eastern gate.
Here we part once for all;
A solitary waterweed drifts off into the distance.
When I think of the wandering clouds you will come back into my thoughts
Sunset will bring with it memories of you.
We part now with a wave of the hand; as we turn our horses they neigh farewell.

A chill wind springs up from the horizon,
What are your thoughts now I wonder?
When will the wild geese arrive?
Rivers and lakes are big with autumn floods
Your literary compositions are a foe to your success,
The ghouls are gleeful when people (like you) pass by
I fear your path corresponds to that of the "aggrieved spirit".
Throw a poem to him in the Mi-lo River.

Legend has it that Li Po died in a most poetic way by falling from his boat when he tried to embrace the moon in the Yangtze River.  The 'aggrieved spirit' reference in the poem Jenyns says is an allusion to Ch'ü Yüan, who committed ritual suicide by holding a rock and wading into  a river, today celebrated by the dragon boat racing festival. 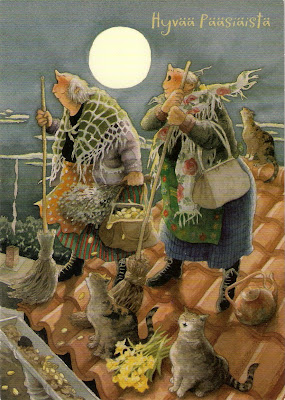 The Aunties are enjoying howling at the moon and I think pretending to be Easter Witches, (trulli in Finnish) The trulli are supposed to do mischievous things at this time of year and in Finland are represented as scarf clad women riding a broom with their black cat and copper coffee pot. Yes they are all in place together with daffodils and coins.  I am not sure what the coins are all about but there is a tradition where children go door to door exchanging decorated twigs for coins, so maybe the old ladies have been collecting.
Thank you Eeva for sending this Easter greetings, one of Inge Löök's best, such a fun, and wonderfully imagined card. 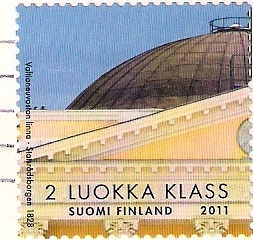 In 1811 the Russian Emperor founded the 'Office of Intendant' to supervise building competence in Finland and today the Senate Properties continues the objective of looking after and creating public buildings and this set of stamps commemorates its 200 years.  The stamp designer, Pekka Piippo shows details of six well known buildings owned by the State of Finland, each reflecting a different era. This first is the Government Palace of 1828 which houses the prime minister and government departments.  The other two I have 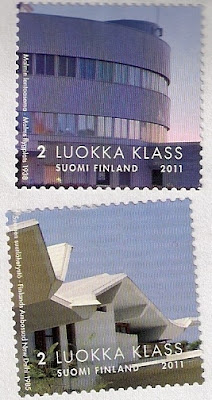 show Malmi Airport - the curved lines so typical of the era it was built (1938) and today still with the original buildings and runway system, considered possibly the best preserved pre WW2 international airport in the world. In contrast next is the Finnish Embassy in New Delhi (1985) which the Embassy site describes as standing " like a Finnish island adrift in the middle of India, permeated by an Indian spirit of place" 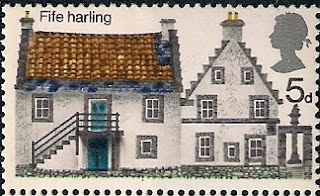 with this house in Fife, Scotland. Harling is a weatherproof shield for a stone building rather like pebble dashing, as the wiki paragraph says "well suited to the Scottish weather". 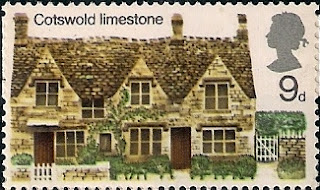 The soft tones of Cotswold limestone. 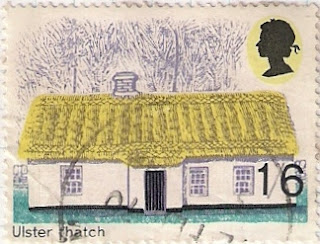 and the fascinating thatched roof.

two Bulgarian stamps of ski hotels issued in 1988. The left, the Rila Hotel, Boravets situated right at the bottom of the ski runs and right, Perelik Hotel, Pamporovo.  The winters here tend to be mild but they have 150 days of snowfall a year which makes the ski season a long one where you can swoosh down the runs under sunny skies.


An entry to Viridian Postcard's Sunday Stamps theme of Architecture 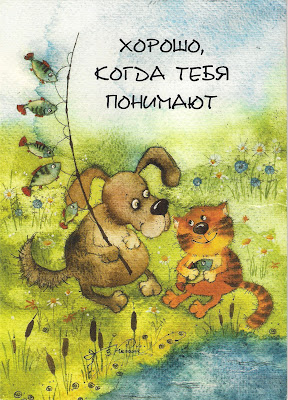 Evgeniya sent this card from Tomsk and translates the Russian words as "It's nice when someone understands you".  Eyes meet over a gift of fish on this cute scene, this dog knows the way to a cat's heart.  The card reminds Evgeniya of summer, so lets look forward to sitting on a riverbank with someone who understand you, with or without fish.

The card came with definitive stamps

a hare, the Rostov Kremlin and two Moscow Kremlin.
Posted by Joy at 00:44 1 comment: