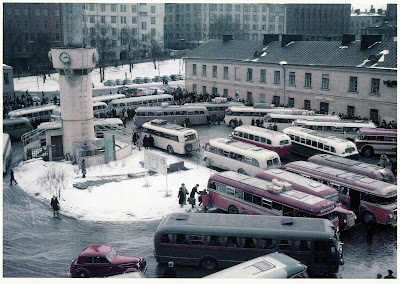 A bus station in 1950s Helsinki packed with people each with their own stories and destinations. Highlighted against the snow the driver is loading cases from the passengers and by the clock a group is patiently waiting to board the bus.  I love transport hubs (and old buses) but Helsinki has an even greater claim to fame for its main bus station gave rise to the Helsinki Bus Station Theory about creativity.

Today Helsinki has a sparkling new bus station where 700 long distance buses depart and the same number arrive. One of the busiest and most modern bus stations in the world and the record holder for the world's largest underground bus station.  If you are wondering what the other record holders are look here

Postcards for the Weekend theme - Transportation - take a trip to Connections to the World
Posted by Joy at 15:24 2 comments:

A rabbit sits watching among the buttercups and bracken on the island of Alderney
but one might find the Easter bunny has hidden some chocolate eggs to find among the flowers.
It will be June before the prickly rose appears in Finland, sometimes called the Karelian Rose this is North Kerelia's county flower. 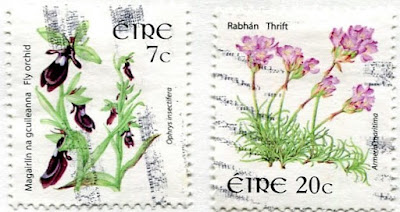 Flowers are a popular motif for definitive stamps and Ireland did not disappoint with their series of Wild Flowers of Ireland which ran from 2004 to 2010 with different flowers and values being added through the years. The 7c fly orchid first appeared in 2005 with the 20c Thrift, one of three coastal flowers which were the last stamps to be issued in the series in 2008 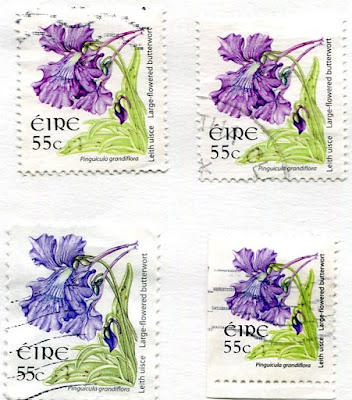 The stamps appeared in a variety of formats and sizes as can be seen in these 55c of the large flowered butterwort, a plant native to Ireland but not seen in Britain. 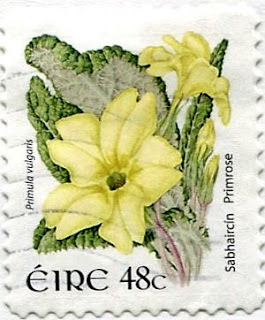 The 48c primrose was one of seven stamps to start the series in 2004 which would eventually feature 27 different wild flowers on 50 stamps painted by the botanical artist Susan Sex. They can all be seen here

More flower definitive stamps this time issued by the United Nations in New York featuring a cherry blossom in their gardens and a peace rose from their Rose Garden, part of an original donation of 1,500 rose bushes given to the headquarters by the American Rose Growers Association.
Time to take a walk to through the Sissinghurst gardens, designed by Vita Sackville-West to be like a series of rooms.  The stamp designer is Liz Butler who is known for her miniature paintings of gardens, at the moment she has shifted her painting interest into allotments.  They are as much loved by their owners as gardens but as she says are "more temporary and make do and mend" 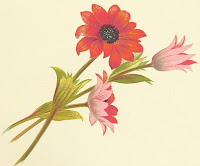 An entry to the Sunday Stamps II prompt of the Letter F - for Finland, Flowers and Fauna - See It On A Postcard 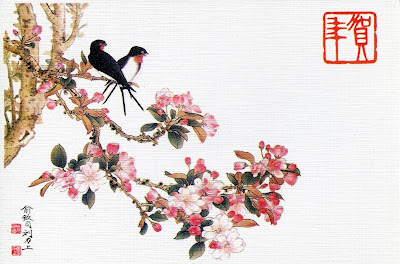 This is actually a Chinese New Year linen-finished postcard but the painting holds all the promise of spring with the combination of plum blossom and swallows.  I look forward to both being with us soon.

Postcards for the weekend theme - Spring - Connections to the World
Posted by Joy at 16:31 6 comments:

Michael Faraday appears in this stamp buzzing with ideas and what looks like one of those Faraday wheels we all enjoyed spinning at school to see how electricity worked. Faraday, explorer of electromagnetic fields and inventor of the electric motor was one of four scientists to be celebrated in this set of stamps.
Today we try to save electricity with energy efficient light bulbs.  Due to Heleen's broken computer I am missing the weekly learning Dutch through stamps, as I am sure we all are, this light bulb has some Dutch words within it - 'Europa geeft groen licht'  Europe gives green light,
Going back in time this stamp set showed both waterfalls and power stations and from the date 1921 at the top of the stamp I think this particular one is  the Ellidaár Power Plant, Iceland's first hydroelectric power plant which today forms part of an Electrical Museum.  Lets now travel to China to see one of their hydroelectric power stations
being built, the Xinanjiang or Hsinankiang (depending how it is transliterated into English) Hydro-power station and its dam under construction and then the installation of a turbo generator rotor 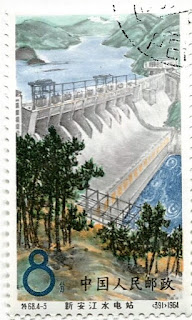 followed by the completion of the project in a rather idyllic looking location.  I haven't got the last stamp in the set which shows the pylons in a more 'dark satanic mills' setting.
rather like this combinations of Hungarian power installations but pylons similar to these might be providing power for
electric powered trains
and trams.  These trams used to run in Sweden's northernmost town Kiruna which lies inside the Arctic Circle.  There used to be three tram lines which existed from 1907-1958. Kiruna is a mining town so the first line to be built was the mountain line which saved the miners a cold walk of several kilometres  and a climb up the mining hill. 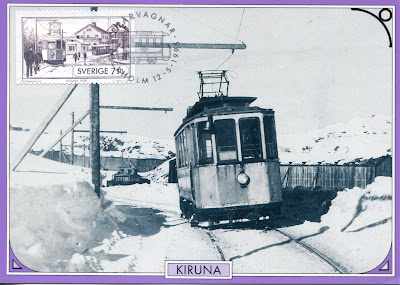 I think this snowy Maximum card may show the mountain route which closed in 1955 after a road was built to the mine. The other line was the city tram line which had 8 Km of track and was unusual in that it had a 1 metre gauge, the carriages had double windows and heating. This closed in 1958 when buses took over from trams.  Lastly between 1941 and 1964 a tram line was used inside the mine with wagons  acquired from the closed down tram lines all over Sweden.  Kiruna is in the news at the moment because due to mining subsidence in the centre the town is being moved 2 miles to the east which led one newspaper calling it 'the centipede town'.

An entry to Sunday Stamps II prompt of the Letter E - for Electricity, Energy, Elidaár and Estonia - See It On A Postcard. 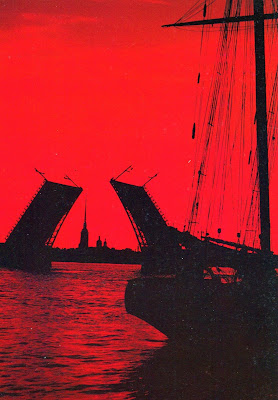 I'm continuing a postcard visit to St Petersburg as I spotted this vivid sunset when I was looking for last week's postcard theme.  You just can't beat sunsets and water.  The view is of St Peter and St Paul Fortress and the bell tower of its cathedral, the oldest church and highest tower in St Peterburg. This 18th Century star fortress is located on Zayochy Island and is the final resting place of many Tsars.  Today the buildings of the St Peter and Paul Fortress are a museum and a popular tourist destination but if one wants to chill out, fatigued having taken in all the history, then at the foot of the fortress walls are sandy beaches.   Views of the fortress and river can be seen here

Postcards for the Weekend theme - Sunrise or Sunset - admire them at Connections to the World
Posted by Joy at 15:09 3 comments:

The Danish artist Christoffer Whilhelm Eckersberg spent three years in Rome so he would have had plenty of time to enjoy and sketch the 8 day Roman carnival and the party goers he portrays in his painting.
Take your partners, time to sashay across the floor. These are the pixies of Peter Møller, a 19th Century illustrator whose pixies are always playing music, singing and dancing, despite the fact that due to a childhood accident he was deaf.  The pixies appeared on porcelain dinner sets and Christmas cards, the latter are highly collectable today.
The North German dancers are painted by Elisabeth van Janota-Bzouski (1912-2012) and with a long name like that no wonder she was known internationally as La Janota.  One of the great German stamp illustrators her 'Day of the Postal Stamp' was chosen as the world's best stamp in 1981 which can be seen here
Almost the same costumes appeared on Polish stamps but not surprisingly as these are dancers from Lower Silesia (Wroclaw) a region whose borders have changed over the centuries.
Lets take to the stage with the Soviet People's dancers
or just enjoy the ballet 'The Red Poppy' with a score written by Reinhold Glière and first performed in 1927, here we see The Sailors Dance (the action takes place at a Chinese port). 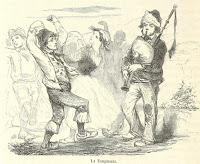 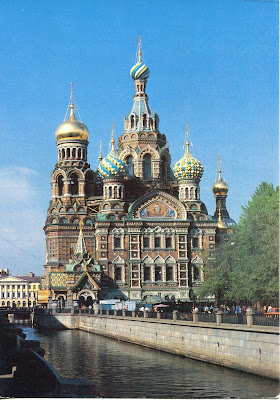 When Tsar Alexander II was assassinated in 1881 the imperial family paid for a church in remembrance of his memory to be built on the site where he was fatally wounded. This church which lies in the centre of St Petersburg by a canal is called the Church of the Resurrection of Christ, commonly known as the Church of Spilled Blood.  Squinting at this card there looks to be a little market going on by the entrance.

The architect is Alfred Parland and, as can be seen, it is in the style of 16th and 17th Century Russian churches.  Alfred Parland (1842-1919) built many churches and houses and was born and died in the city of Petersburg although his mother was German and his Scottish father taught English to the royal family. 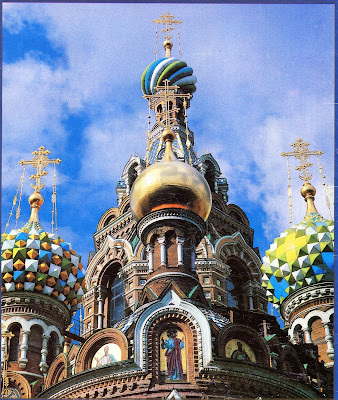 A closer look at those lovely onion towers. The Church of Spilled Blood contains Russia's largest collection of mosaics (7,000 sq m) so no wonder it took from 1883-1907 to complete.

Postcards for the Weekend theme this week - Places of Worship - at Connections to the World
Posted by Joy at 15:31 2 comments:

Time to take a paddle around Soldier's Cove, Langlade. Someone who had taken a trip to Saint Pierre et Miquelon described Langlade (connected by a long sand spit to Miquelon) as "water that goes from emerald to jade to blue, people playing pétanque on the beach, cranberry bogs and tall grasses bending in the breeze". These islands, the last French territory left in North America sound a delight with their brightly coloured houses although it does have a subarctic climate.  St Pierre or Peter is of course the patron saint of fishermen so I hope he is looking after these two anglers
paddling their Canadian Canoe. Of course when I think 'canoe' this following stamp is what I might think of first
although I might have
a more romantic view in mind.   Paul Kane (1810-1871) sketched and recorded the first nation people when he often travelled in one of the Hudson's Bay Company canoes and his sketches and drawings are considered an important record of the people although his studio paintings are a more artistic interpretation.   I am always fascinated by the artists and photographers that travelled the wild places of North America in the 19th century recording what they saw.
There are still wild places to explore such as paddling a Norwegian fjord or perhaps
testing ones skills in white water like Baillie and Stott in the Double Canoe Slalom 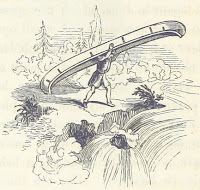 Sunday Stamps II prompt of the Letter C - for Cove, canoe, centenary, Canada and Czechoslovakia- See It On A Postcard.