An alphabet for the alphabet round of Sunday Stamps. Here is a celebration of moveable type, or as the stamp says, the 'Invention of the Art of Printing' 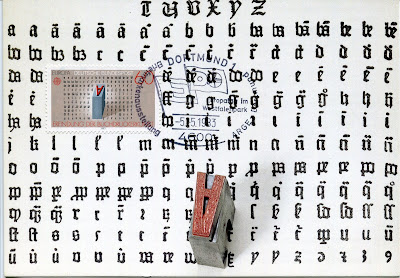 It features a modern letter A against the background of the historic letters of the printing revolution by Johannes Gutenberg. 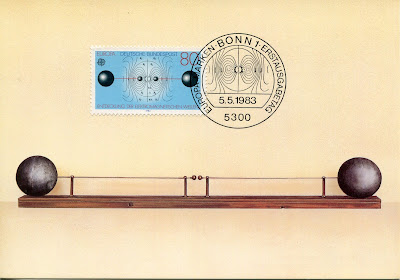 The other genius chosen for this stamp set of inventions was Heinrich Hertz and the discovery of electromagnetic waves.  The card shows his experimental Oscillator.  At the end are two hollow zinc spheres. The spheres are connected to copper wires which run into the middle where there is a gap for the sparks to jump between.

Hertz's experiment proved that radio waves and light waves were part of the same family , which today we call the electromagnetic spectrum. Hertz said "I do not think the wireless waves I have detected will have any practical application". He wouldn't live to see that statement disproved. The stamp shows a representation and image of the electric field lines.
The iconic Brandenburg Gate which has appeared on many German stamps. Designed by the prolific architect Carl Gotthard Langhans, self taught and influenced by Roman architecture he introduced Neoclassical architecture into Germany.
Lastly Casper David Friedrich's most famous painting 'The Wanderer Above the Sea of Fog' which can be seen in the Kunsthalle, Hamburg. The stamp is part of the 'German Painting' series which started in 2005, a new one published each year all designed by Werner Hans Schmidt. 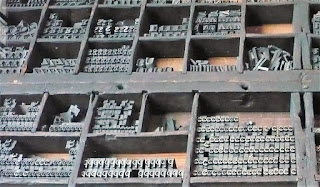 Sunday Stamps II prompt this week is the Letter G - for Germany, Gutenberg, and Gottard - go to See It On A Postcard 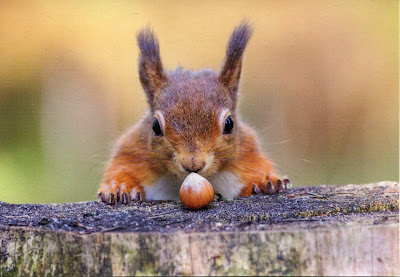 Now is a busy time of the year for red squirrels and here is one eyeing up a nut to pop into its cheeks, scamper to a hiding spot and squirrel them away for winter.  Or perhaps it can't wait and is about to crack open this tasty treat  The card came from Anastasia in Moscow who themed the card with flora stamps of trees.
I like the balance of these stamps with the trees in a misty background, perhaps this is the mist of autumn days. On the left is the maple (Acer platonoides) which always puts on a superb colour show at this time of year. On the right is a tree enjoyed by a multitude of birds, the Greek Juniper (Juniperus excelsa).
Posted by Joy at 18:23 No comments:

Footie in the Faroes

This FDC has three anniversaries on it for not only was the it the Federation Internationale de Football Association (FIFA) centenary it was also the centenary of two Faroe Island football teams HB and KI and their centenary badges can be seen on the cover. 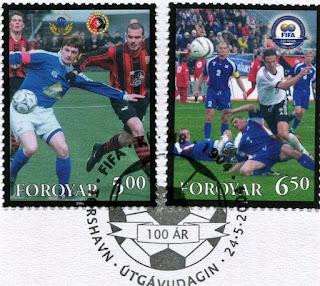 The stamp on the left shows a match between the two teams.  HB (in red and black stripes) based in the capital Torshavn is the most successful Faroe Island team and in blue, KI Klasvík (their women's football team is the most successful).  The players are amateurs or semi professional mostly local with a smattering of other Scandinavian nationalities however one player (Aleksandar Stankov) for HB did stand out on the list with the distinctive Macedonian flag by his name.  How footballers end up in far flung places in pursuit of the dream of playing football.  The other stamp shows the Faroe Island national team playing Germany which I imagine took place in 2002 for the EURO 2004 qualifying matches. Like most teams playing playing Germany they lost.
One of the founding members of FIFA was Switzerland and indeed the headquarters are there. The envelope has an embossed map of the world which I think you can just about see in this scan. 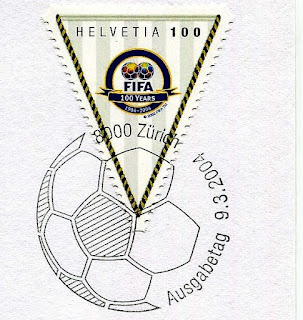 and of course the stamp is in the shape of a sports pendant.  Leaving the behemoth, for good and bad, that is FIFA but still playing football here are
the 3rd Island Games (a sort of Olympic Games for islands) which were held in the Faroes in July 1989 with participants from about 20 island countries. The Faroe Islands won the gold medal for the football competition and overall came 3rd in the medal tables with the Isle of Man taking the major medal haul.  Although football is a popular sport the national sport of the Faroe Islands is 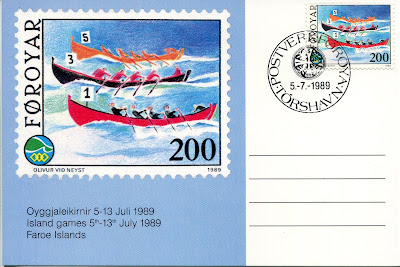 rowing.  One would have to heave on the oars against these waves.


Sunday Stamps II prompt this week is the Letter F - for Faroe Islands, Football and FIFA - See it On A Postcard

The theme for the 1995 Europa stamps was Peace and Freedom and the Irish artist and designer chosen for this set was Robert Ballagh, a prolific stamp designer for decades and a fun fact for the dance enthusiast, he was the set designer for Riverdance.  He has a rather nice website that showcases his work here.  I noticed Ireland's An Post had a postcard booklet of some of his designs 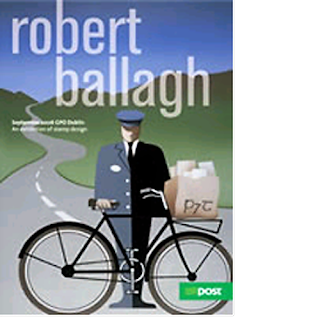 my finger was hovering over the 'buy' button. I love the cover and wonder where that road might take us
perhaps to the west of Ireland and Kilcolman Nature Reserve in County Cork often referred to as Kilcolman Bog but it actually is a rare example of a limestone fen and a wintering ground for many water birds.  If wanting a trip to combine town and green spaces then head for the 1,750 acre Phoenix Park in Dublin
If it is August then the Gathering of the Boats at Kinvara in Galway Bay is quite a sight or head for the stunningly beautiful County Kerry and the Puck Fair whose origin is lost in antiquity. It lasts for three days and a goat is caught in the mountains and brought into town where a school girl who has been crowned queen for the festival will crown him King Puck. The goat will be fed and watered, looked after by a vet and then at the end of the festivities released back into the mountains. I'm hoping it looks on it as a little holiday.  There is no goat trade union so I don't know its rights
but Louise Bennet fighter for women's emancipation and trade union rights would be the person to set one up. After all this activity maybe it is time to visit the Abbey Theatre one of whose founders was Lady Augusta Gregory opening its doors in 1904 with one act plays by her, WB Yeats and JM Synge the Irish National Theatre was born.

This week's Sunday Stamps II prompt of the Letter E -  for Eire, Europa and emancipation - See It On A Postcard
Posted by Joy at 13:02 5 comments:

The Nordic countries stamp theme in 2016 was food culture and  Denmark chose two of their fish specialties.  I wonder if these open faced sandwiches are the sort of things to be eaten near a fish quay? 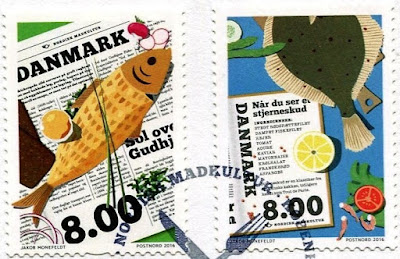 The stamp on the left shows Sol over Gudhjem (sunshine over Gudhjem) consisting of smoked herring, a raw egg yoke, chives and rye bread.   The dish originated on the Island of Bornholm (known as the Sunshine Island) and the newspaper shown in the background includes a description of this lunch dish in Danish and in the island's local dialect.  A plaice appears on the stamp on the right - the dish Stjerneskud translates as  shooting star.  Some of the ingredients are drawn on the stamp but the menu lists them all. I wonder if it is like pizza options when one can pick and choose
Lets imagine this bowl contains the vegetarian option of our dinner.  The PHQ card shows an earthenware bowl dated about 3200 BC from Skarpsalling (Jutland).  The ornate Skarpsalling bowl which I imagine is a national treasure also features on the Danish 50 krone note. 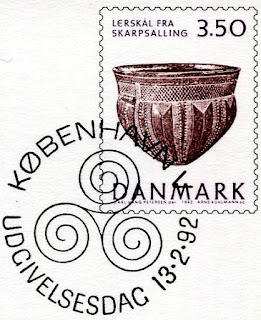 The prepaid card has a rather nice spiral cancel echoing the ancient decorative nature of the bowl.
Ready for something to drink?  How about some foaming beer from a silver tankard or possibly the Bishop's bowl might be more interesting because it is a faience punch bowl shaped in the form of a mitre. The alcoholic drink served from the bowl was know as 'bishop' after the purple of bishops robes.   The mix was red wine, orange and sugar. Rum was sometimes added for taste and a preserver.  My observation of alcoholic punch is that 1) can be quite lethal and 2) no need of a preserver as there is never any left


The Sunday Stamps II prompt this week is the Letter D - for Denmark, dining and dish - dash over to - See It On A Postcard

These two look as though they are just waiting for the music to start before shaking their ruffles.  Lets C some more Latin American countries featured on Cuban stamps. 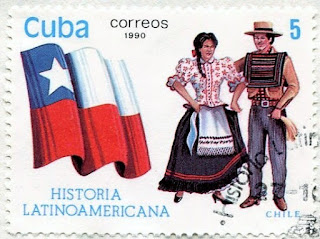 These look more like practical clothes.  I think the poncho type top is Chilean chamanto and both men and women wear them but it seems only the man gets to wear a hat 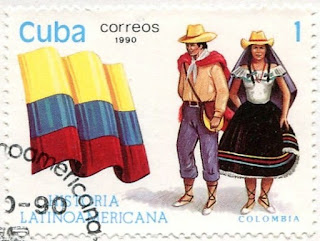 whereas Columbia is an equal opportunities place in the hat stakes. 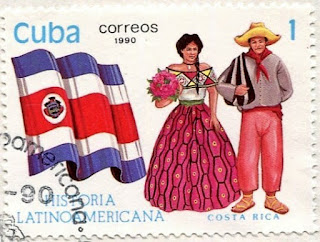 Costa Rica is made up of seven provinces and each has its unique variation of the traditional costume. Of course one must not forget sporting costumes
and the nifty baseball outfit.  The stamp features Lourdes Gurriel, baseball legend, who had an amazingly long career as a player and after retirement managed and coached.  The Gurriel baseball genes are very strong for both his sons are talented baseball players; Yuli plays for the Houston Astros and Lourdes Gurrel Jr plays for the Toronto Blue Jays which I'm going to sneakily claim as another C for Canada in a 'six degrees of separation' type of way.

Sunday Stamps II prompt of the Letter C - for Cuba, Chile, Colombia, Costa Rica, chamanto and costumes - See It On A Postcard