Åland's first stamps were issued on 1st March 1984 although they were actually produced by the Finnish Post Office in cooperation with Åland's provincial government.  At this time of change both Finland and  Åland stamps could be used on post and the cover above takes full advantage.  A few years later in 1993 under the Autonomy Act matters including postal were run on the islands and Finland's stamps were no longer valid.
Lets look at the stamps starting at the top left which shows Åland located amongst the Nordic Countries; the cover repeats this sentiment in its map outline on top of an aerial photograph.  Travelling anticlockwise next are two of their first fishing boat definitive stamps. Three other stamps were issued in March 1984 of which two are on the cover, the harbour of Marienhamn and the sails of the barque Pommern (a museum ship which is a popular tourist attraction) and in the background, modern car ferries. The Åland flag flies in the corner and the stamps are completed by Midsummer celebrations (one of Finland's Europa stamps from 1981 on the theme of Folklore). 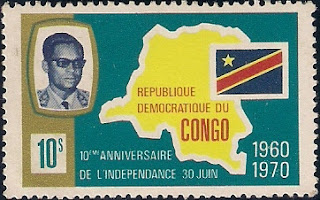 This one commemorating Congo Independence also shows Joseph Mobutu who came to power in a military coup
and this one also contains an outline of Lake Chad and its source rivers in Chad. 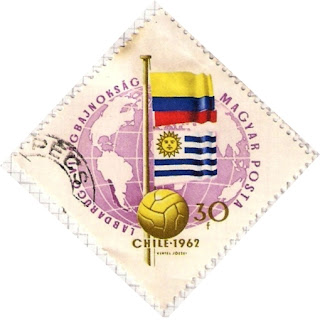 For a sporting view of the world go back to 1962 when the Football World Cup was held in Chile. The flags are of Columbia and Uruguay who both went out in the group stages 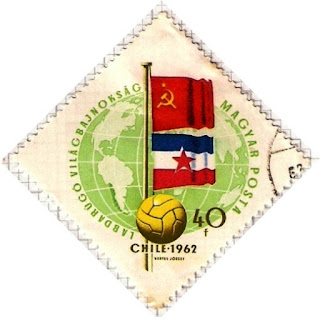 The countries that made it to the quarter finals but no further were the stamp issuers, Hungary, the USSR with their instantly recognisable flag, England and West Germany. The other flag is Yugoslavia who would progress to the semi finals where they lost to Czechoslovakia.  This was the year that Brazil became World Champions. 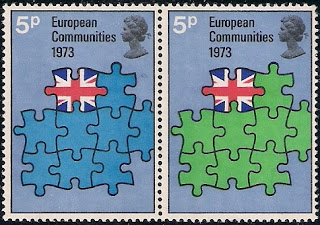 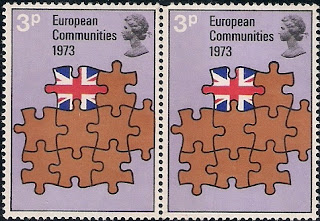 one 3p value. I don't know if the colour has any significance but this is certainly a topical stamp today as we run up to the 'EU In or Out' Referendum some time in 2017.  If we stay in the stamp theme could be reissued with a few more jigsaw pieces and a slightly different shape.  If out, the Union Flag would have to float out into the sea edging out of the stamp. 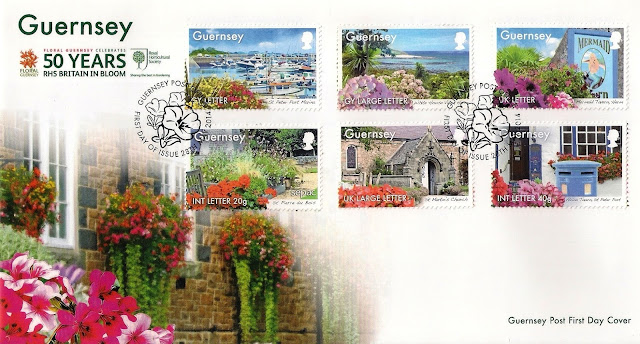 Last year Guernsey celebrated 50 years of the Royal Horticultural Society's Britain in Bloom competition with this stamp set featuring some of the Channel Island's recent Gold Award winners.  From small village to city throughout the British Isles there are flowers blooming in every imaginable size and shape of container and patch of ground, bringing colour and nature into the built environment and perhaps hoping for a prize.

Top L to R we have the capital of Guernsey, St Peter Port and its marina and then two views from the island of Hern, White House View and the Mermaid Tavern.
They have not announced the winners for 2015 but the place featured on the bottom left stamp, St Pierre du Bois, is in the running for the coastal prize. The bottom middle stamp is St Martin's Church and lastly the Albion Tavern in St Peter Port whose claim to fame is that it is the closest Public House to a church in the British Isles. A perfect example of  how to locate a pub, head for the church spire and you will find a pub nearby.  I suspect your eye will be more taken by the postbox.  The stamp images were photographed by the clematis nurseryman and breeder Raymond Evison  (his clematis display won a gold medal at this year's Chelsea Flower Show).

Nature can put on a show without any human intervention, I have my own favourite place for the next flower which bloom in abundance around a pond in a hollow on a local fellside, 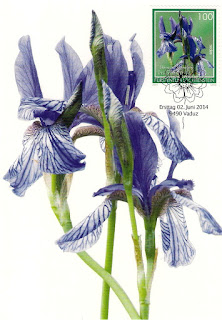 the Flag Iris or to give it its sunday name of Siberian Sword Lilly. This is one of Liechtenstein's 2014 definitive series featuring Bog Flowers. in German, a word that rolls off the tongue, Moorblumen 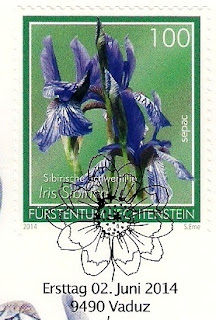 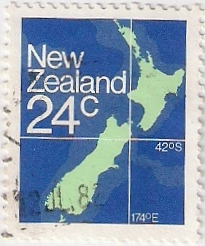 Let me take you to the Land of the Long White Cloud.  It was the first country that popped into my head for this week's Sunday Stamps scenery theme.  New Zealand's continuing definitive series has an infinite choice of subjects in the country's stunning landscape.  My love of mountain scenery means the first stamp is a tranquil scene featuring Mitre Peak 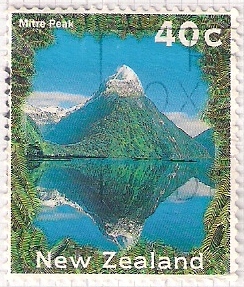 This stamp was issued for what must be a rare occasion in any country - a reduction in price for standard letter post - but only within New Zealand from 45c to 40c.  Mitre Peak (1695m) rises out of the water of Milford Sound at the heart of the Fiordland National Park on the south west corner of South Island.   The Maori name for it is Aorangi - Cloud Piercer 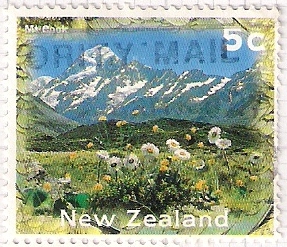 I like the borders of the 1995 set and this has Kea feathers surrounding a view of the alpine area of South Island with the many peaked Mount Cook in the background.  I wish New Zealand still issued stamps of this larger size for their scenery definitives but from 1996 they went for a smaller size and self adhesive 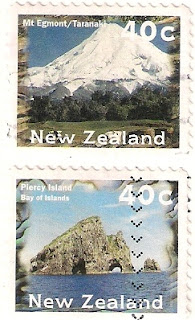 They were first issued in booklets of 10 and the first country in the world to use dot screen technology on the stamps for a sharper image.  Top is Mt Egmont on the flat land of central west coast of North Island.  The Maori call it Barren Mountain (Taranaki) and the legend tells how it was banished here after a quarrel with a big volcano.  It is estimated that the last time Mt Egmont erupted was in 1775.
The bottom stamp above is Piercy Island at the eastern entrance of the Bay of Islands on the NE coast of North Island. The hole you see goes right through the island and small boats in calm seas will sail through it.  A popular tourist destination and

many people will stay here in Russell taking trips from its seaport on the Bay of Islands.
Another popular tourist destination is the Fox Glacier which runs with its companion Franz Josef from a high alpine level down to within a few hundred feet of sea level. 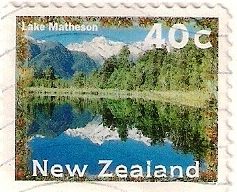 Once again Mount Cook is featured but this time reflected in the waters of Lake Matheson together with Mt Tansman. 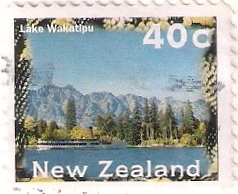 The second largest lake on South Island is Wakatipu and this shows the vintage steamer Earnslaw (built 1912) cruising on its way to Queenstown in Central Ortago. 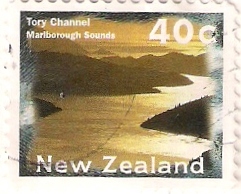 The last one I have of this set is of Tory Channel which is always calm (in contrasts to the wild seas of the Cook Straight which divides the two islands) and is named after the survey ship which manoeuvred and mapped its way through this tricky and winding passage in 1838.
Cape Kidnappers (which sounds like it should be a film title) is on Hawke's Bay and has a large gannet colony.
Here in Central Otago we are in the most inland region of New Zealand and the driest, hottest and coldest place in the country.  A beautiful winter view.

Lastly lets take to the water and do some whale watching at Kaikoura on the south islands eastern coastline and then relax 'while sheep do safely graze' by Lake Coleridge at the foot of the southern alps, Auckland and their dormant volcanoes.


An entry to Sunday Stamps II theme - Scenery - take in the more views here
Posted by Joy at 11:00 5 comments: 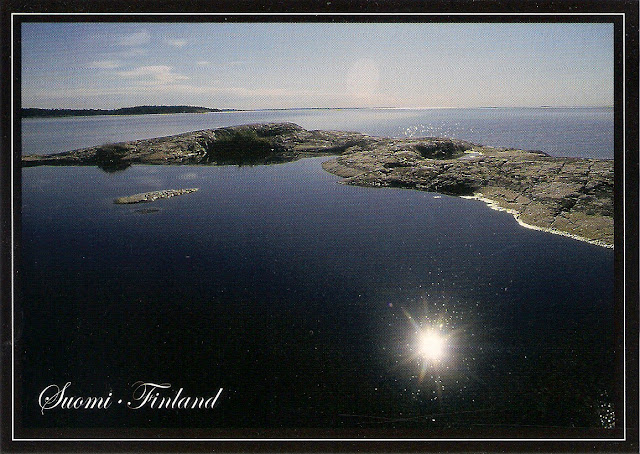 The town of Porvoo on the south coast of Finland is surrounded by water and forests and their summer boats travel to the islands of the Porvoo Archipelago.   The archipelago is described as idyllic and this postcard showing light glistening on the water certainly gives that impression.  One of the famous residents of the Torvoo Archipelago was Tove Jansson of Moomin fame.  This view speaks of the long lazy days of summer, which we have now left behind us as the first colours of Autumn appear and the light starts to shift and the days shorten.
Posted by Joy at 20:33 No comments: