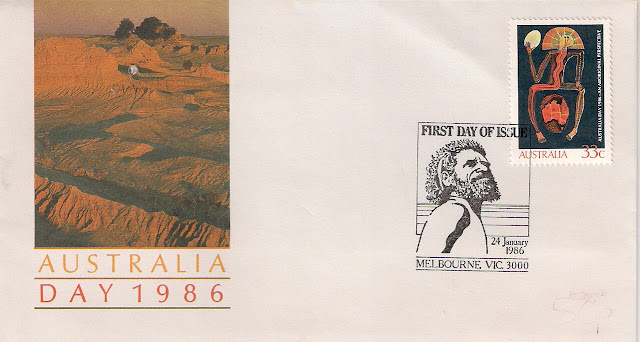 Sunday Stamps may not fall on 26th January, Australia Day, but its near enough, just like this first day cover which also celebrates Australia Day but on the 24th January.  From an aborigine perspective that may be a better day as they call the 26th January, invasion day.

The stamp design is by Arone Raymond Meeks drawing on his Aboriginal heritage, the back of the envelope explains:

The cover photograph shows the Walls of China in the Mungo National Park (in south-western New South Wales); a series of lunette (crescent shaped sand dunes).  For photographs of Walls of China lunettes see here

The area was declared a world heritage site in 1981 and is of great significance to the Aborigine people who settled here 40,000 years ago. The Walls of China lie east of the dry Lake Mungo where there have been remarkable archaeological finds of ancient people which have been named Mungo man and Mungo women. The ultimate footprints in the sands have been found by archaeologists - the world's largest number of  human footprints in the dry lakes dating back to the ice age, about 20,000 years ago. 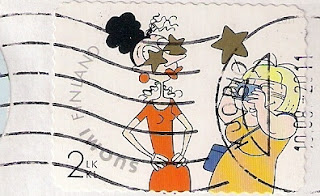 As an alternative to my favourite Inge Löök's anarchic Finnish aunties here is different Finnish duo dreamt up by Tina Pajo and Sari Luhtanen - Maisa and Kaarina.  The popular cartoon strip has appeared in the weekly magazine Anna for over twenty years.  This stamp is from a booklet of 6 stamps which also included 30 speech bubbles which you could attach to the stamps (Another imaginative touch from Posti).  The cartoon strip follows  life's ups and downs of these 20/30 something friends.  The set was issued in 2011 for the 100th Anniversary of the National Council of Women of Finland and the duo were chosen for the "Wonderful Women" theme, as it was thought they showed the "versatile daily roles of women".

To move on to the animal kingdom, always a popular theme for cartoons we have 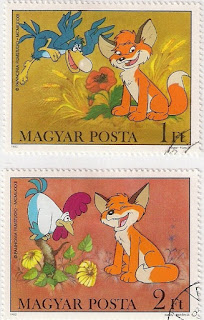 the book Vuk about a young fox written by Istvàn Fekete, turned into a film in 1981 and called  The Little Fox. in its English language release.  Born in the spring near a pond Vuk's parents are killed by a ranger (humans are called smooth skins) and he is brought up by his uncle Karak where he learns how to survive in the world and becomes very clever. His uncle too is killed, he rescues his sister from imprisonment and then they both bring up their own families.  The film is apparently both moving and funny showing the cycle of life. I've never seen it but there is both the Hungarian version with subtitles and the English version on You Tube.

Travelling from Europe to the USA and
two classic Disney films which never seem to date and have entered most peoples childhoods, beautiful cartoon drawings and great stories.
Stories were things that Baron Von Munchhausen (1720-1797)  loved to tell about his war and other adventures, largely from his own imagination.  These stories were collected by Rudolf Raspe and further exaggerated and the two volumes regale the Baron's astounding adventures which include the one portrayed on the stamp, that of the horse presented to him by Count Przobossy on which he performs extraordinary feats, even when the horse is severed in two


An entry to Viridian Postcard's Sunday Stamps theme of Cartoons and cartoon like drawings. 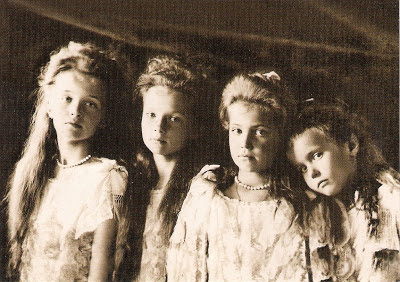 Looking at us through time the daughters of Nicholas II - Olga (the eldest), Tatyana, Marie and Anastasia.  The children were usually dressed alike, a random fact I read recently in one of Sam Eastland's Russian set novels about the investigator Pekkala.

This is one of a series of photographs taken of the sisters in 1906 which for the onlooker gives it an inner melancholy but happily, despite their expressions, they were oblivious to the fate that awaited them.  To quote from another novel, that of Kate Atkinson's 'Started Early Took My Dog' -


"Jackson found photographs unsettling at the best of times. There was a lie at the heart of the camera , it implied the past was tangible when the opposite was true"

This card was sent from the city of Nizhny Novgorod and to up the count of authors mentioned in this post was from 1932-1990 known as Gorky.  The writer Maxim Gorky's views on the social order meant that he felt safer moving to the island of Capri from 1906 (the same date as the photo) until 1913.  Returning eventually to Russia under an amnesty which was given to celebrate the 300th Anniversary of the Romanov Dynasty . 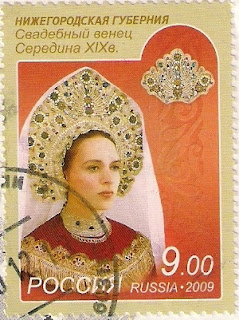 My sender, Elena, attached one of the 2009 Headdresses stamp from the miniature sheet. Even better it is a wedding headdress from her region of Nizhegorodskiy.  These type of headdresses are called kokoshnik which refers to the shape and are embroidered with beads and gemstones and go way back in time.  This one is from the 19th Century which was the time of a great revival of Russian Culture.  How wonderful to walk down the aisle in this twinkly object.

The card came with six stamps in total, from the Kremlin definitives and one from the forest dwellers definitives 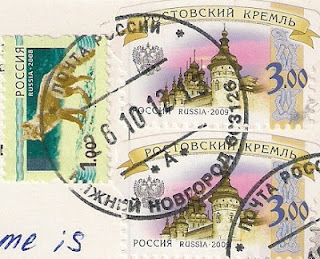 and some newly inked postmarks. I'll only show the stamps I haven't shown before the 1.00 of the fox and the other of the Rostov Kremlin which faces Lake Nero and  is now a museum.
Posted by Joy at 22:29 1 comment: 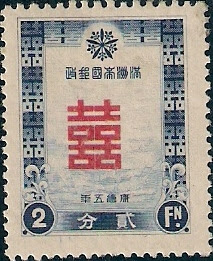 New Year Greetings in 1937 from Manchukuo and wishing twofold happiness. This is the area of north east China known as Manchuria but in 1931 Japan invaded the region and installed a puppet government under President (later emperor) Pu Yi and called the area Manchukuo.  The stamp shows Manchukuo symbols.  The twofold happiness it refers to is  the 5th anniversary of the reign of Pu Yi which occurred at the new year.  Pu Yi is possibly better known as "the last emperor of China" being the last of the Manchu emperors, both briefly as a boy of two in 1908 until the country turned into a republic three years later and then as a puppet emperor of Manchukuo under the Japanese in 1932.  He probably epitomises the Chinese curse to live in interesting times. 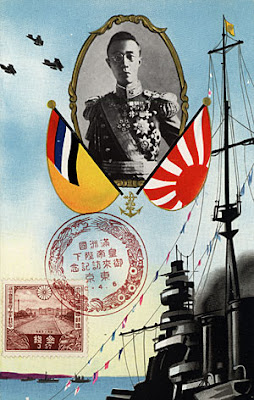 .
Pu Yi's western style uniform is because as a member of the Manchu dynasty he refused to wear the Manchukuo style robes the Japanese wanted him to wear, this was the compromise.  A brief summary of his life here 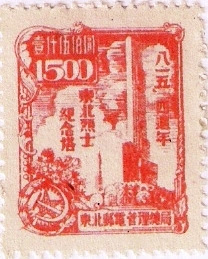 Staying in North East China the North East China People's Post issued this stamp in 1949 to commemorate the 4th anniversary of the Japanese surrender, which shows the North East Heroes Monument.  China had been fighting a civil war since the 1920s and a full-scale war with the Japanese from the 1930s to 1945. Although not a time you would wish to live through it is an interesting era for the philatelist because the military posts and various regions and occupations of China all produced stamps. 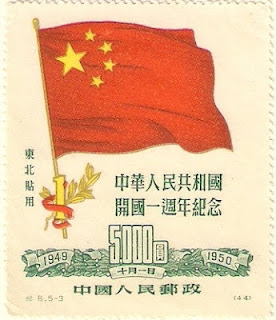 Arriving at 1950 this is one of the stamps celebrating the 1st Anniversary of the People's Republic.  They are the same as those produced for China but with the additional characters on the left showing it is North East China. 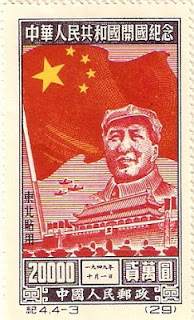 The same as this one issued in 1950 for the foundation of the People's Republic of China by a declaration on  on 1st October 1949 by Mao Tse-tung at a grand ceremony witnessed by 300,000 people in Tienanmen Square, Beijing.  Regional issues of stamps ended at the end of 1950 as the whole of China looked towards the future together.  The post revolution period was one of optimism and great advances but in common with all revolutions things were about to go wrong.


An entry to Viridian Postcard's Sunday Stamps theme of - beginnings 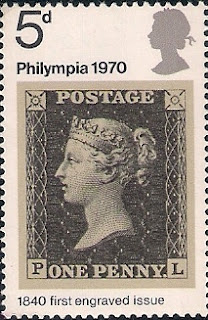 For this week's Black theme it is irresistible to feature a stamp of a penny black , the world's first adhesive postal stamp which featured as one of three British iconic stamps  for the 1970 gathering of the Philympia International Stamp Exhibition. 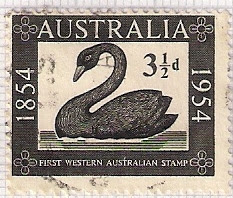 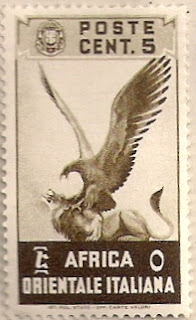 Another symbolic bird on a stamp of the Italian occupation of Eritrea, Ethiopia and Somaliland from 1936 until 1942.  This features an Italian Eagle attacking the Lion of Judah. The eagle was one of the symbols of the Italian Fascist Government and the Lion of Judah was the symbol of Haile Selassie, king of Ethiopia.  Fascists - never the most subtle of organisations - were also coincidently rather fond of black. 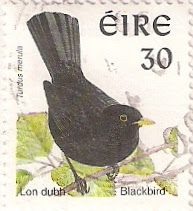 Just to bring a splash of colour a blackbird on a branch.