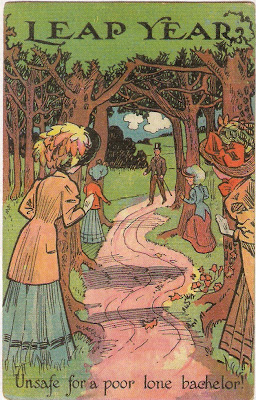 Unsafe for a poor lone bachelor!
Watch out lone man approaching down a 20th Century path.  An American postcard from 1908, unfortunately not one I own because it was used in a magazine to illustrate abstracts from diaries entries written on the 29th February. I would love to know what was on the other side.
Posted by Joy at 18:49 3 comments:

A Sea for All Seasons 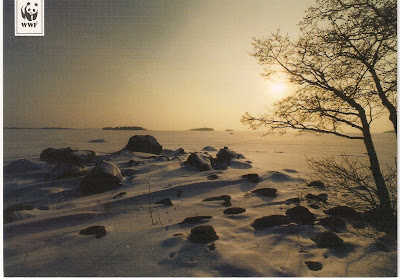 The Baltic Sea is brackish, its low salt content and its location at 53°N-66°N means that most years 45% of the surface is covered in ice in winter, the ice peaks in February.   My postcrossing friend Eeva has recently sent me four cards from Finland where she shows what it is really like, so here comes Eeva's wonderful world. This first card is what it looks like now, I think this how the seals like it. 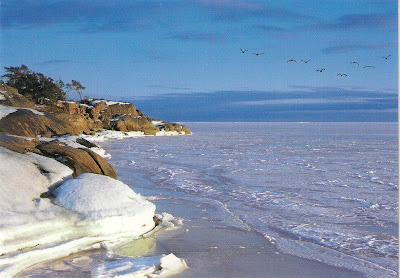 A March view.  In southern Finland the spring is arriving, in the north it is still winter. The first geese and whooper swans arrive. 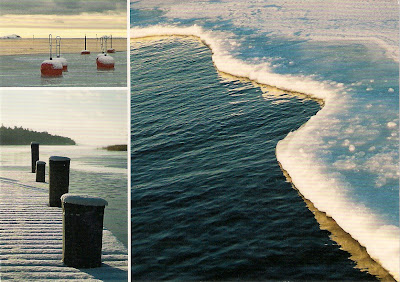 This card Eeva thinks is probably April. The days are lengthening and sometimes warm but there is still plenty of snow. Late April is the busiest time for bird migration.  June is the time of the midnight sun but here 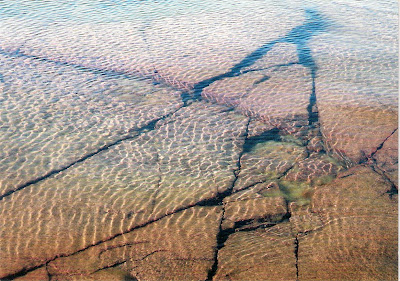 comes summer.  It is said that the Baltic geology resembles a riverbed and I think this shows it to perfection, that and the fact I can imagine paddling in this wonderfully clear water, the sunlight rippling on the surface. Sitting in the middle of the River Dee surrounded by marsh, water and woodland the ruins of Threave Castle is a marvellous place for birds, and those that watch them.  This is one of those extra long cards that do not seem to fit anywhere but as it is so atmospheric I usually have it on display.  I imagine it as a still Autumn morning.  The river in past times was much higher at this point but in winter the level rises to surround the ruins.

The castle belonged to the Black Douglas clan, built in the1300s by Archibald the Grim. They seemed to call their offspring Archibald on a regular basis, I suppose having descriptive addition sorted who was who.  Although it is a name you would possibly think twice about accepting an invitation to visit.  The Black Douglas have an interesting, if bloody, history in the search for power.


An Entry to "Our Wonderful World Tuesday", the idea of  Cuckootree 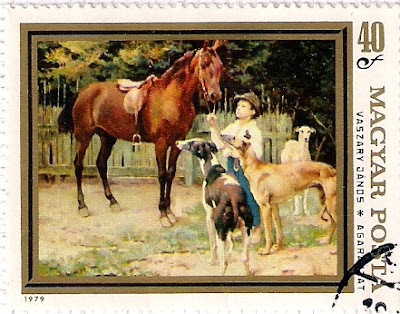 A boy with horse and variously coloured greyhounds, the black and white one  is looking expectantly for the rider.  The painting is by Janos Vaszary (1867-1938) a national treasure of Hungary. He spent many years travelling and working abroad, studying in Budapest, Munich and Paris, the latter influencing his style. He began to paint outdoors, I can just imagine him sitting by the stable door. I think this painting is an early one because throughout his long career he painted in many styles, art nouveau (his most famous painting from this period is The Golden Age), impressionist, post-impressionist, fauvism and cubism.  He was always experimenting and also as a teacher helped many questing for their own style.  Anyway I will now get back onto the theme with some cute baby animals. 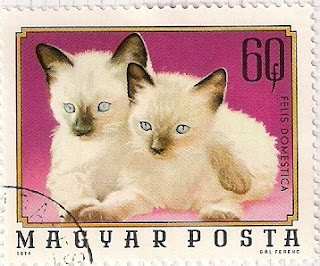 which seems a popular topic with stamp issuing authorities.  Another favourite pet is the rabbit 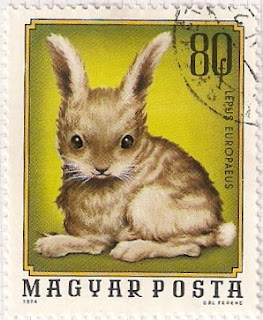 who could resist those ears. And lastly something that is not a pet but I'll include because it is 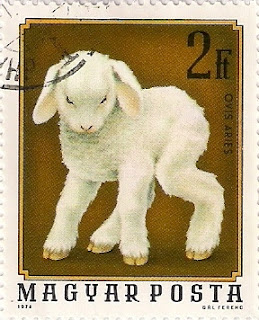 lambing season and some of them who are needing a bit of help will be cosseted like pets.

An entry to Viridian Postcard's Sunday Stamps theme of Cats, Dogs and Pets 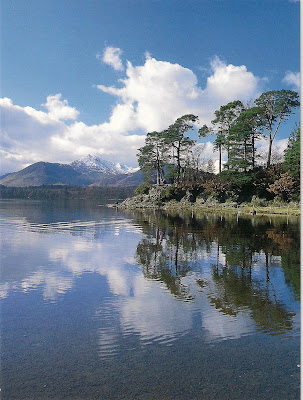 Jocelyn over on Cuckootree has starts a new meme today "Our Wonderful World Tuesday "to celebrate the beauty and diversity of the world" and also will be giving away a Mu & Me Postcard.  How could I resist.  I'll  start on home ground with a view from Friars Crag, a promontory on the shores of Derwentwater,  John Ruskin called this one of the three most beautiful scenes in Europe (no idea what he considered the other two to be).   He may have been biased because like me he lived in the county and also his earliest memory was being taken to Friars Crag as a child.  It is a popular place for tourist and photographers alike.  If you took your camera there this week there would be a lot more snow than the sprinkling on this card.

Our Wonderful World Tuesday has a neat little badge too 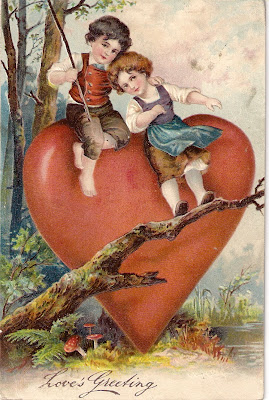 A heart sent through the post on 17 October 1906 on a pretty embossed card from an anonymous sender in Rhyl, north Wales 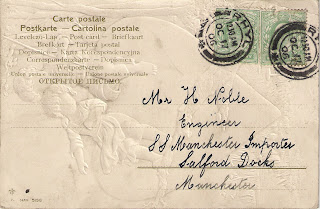 to Mr H Noble, an engineer on the SS Manchester Importer. Perhaps they had met in the seaside town of Rhyl.  I wonder if he could guess who sent it?  The ship was one of the Manchester Liners fleet which used to come from the Manchester Ship Canal and make regular sailings to the eastern seaboard of the USA and Canada.
Posted by Joy at 00:41 1 comment: 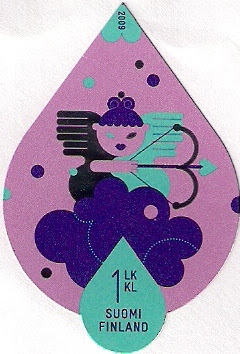 Cupid is drawing the bow on this "little drops of happiness" stamp from Finland.  Once the arrow flies then two hearts will 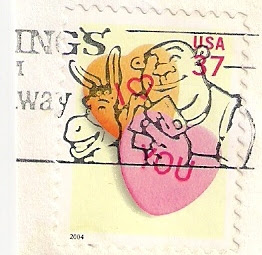 become one. (The Shrek postal cancel covering this US stamp of two love hearts almost makes it a differently themed stamp). Both this stamp and 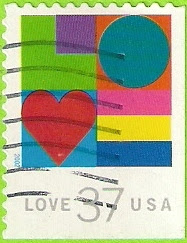 this one were both designed by Michael Osborne who was so enthused by the theme he presented lots of designs ideas for the 'Love' theme to the US Postal Service (see here) but there were no flowers. No problem the US Post always comes up with  flowers on stamps 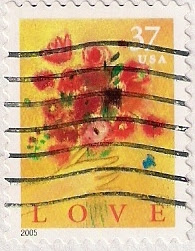 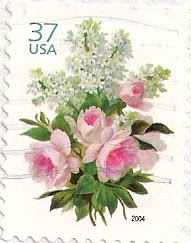 this pretty bouquet of white lilacs and pink roses, a reproduction of a chromolithograph probably printed in German circa 1880-1890, the artist and engraver unknown. 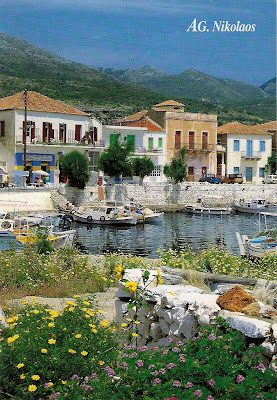 Lets bask in the warmth and abundance of flowers in the little fishing village of Agios Nikolaos on the Mani peninsula  (the middle finger of the Peloponnese).  Take a cooling drink in the taverna. There is a pleasant walk along the coast where if it is September you can pick figs off the the wild trees or watch the swifts dive through the air.
Posted by Joy at 23:43 1 comment: 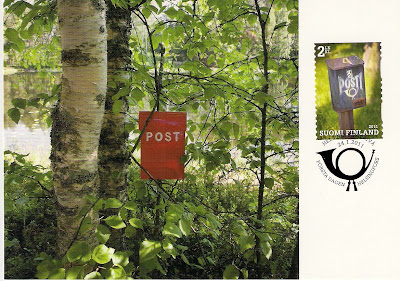 A lake and silver birch trees what a perfect place to pick up your post.  I can almost hear the birds chirping and fish plopping in the water.   Not only do Finland Posti produce fantastic stamps they also create wonderful maximum cards like this. 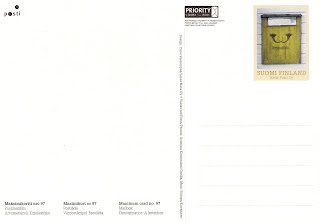 With all the details a collector could wish on the back. This was last years stamp issue on  personal self designed mailboxes of which I have another two 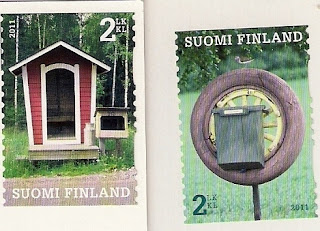 I think if I ever visit Finland, apart from loading up with lots of postcards my camera would be on overdrive clicking mail boxes. 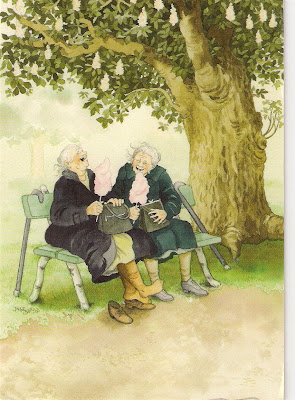 Ah the relief to kick off ones shoes and just relax.  Here the Aunties are having fun eating candy floss, I love how Inge Löök has made the tree flowers look like candy floss too.  Maybe they are the bees equivalent. My sender Ilona says Inge Löök's old ladies are her favourites. She likes their attitude and hopes to be like them when she grows old.  Luckily she has a quirky friend to share this time of life.  The card came with an appropriate stamp - 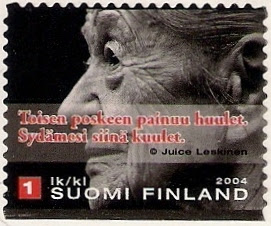 one of the "With Friendship - Kiss" stamp booklet from January 2004.  These stamps showed people at different times of life and of course this one is old age. The words are from the singer/songwriter Juice Leskinen (1950-2006).  How to translate them with no knowledge of Finnish?  Bearing in mind that it is probably a song line so might be obscure anyway, but hey ho here goes:  Kiss the other cheek. If you can hear your heart.  (Correct translations welcome from any Finns out there) 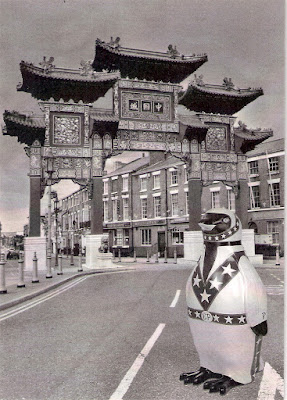 I'm continuing my Chinese theme from Sunday with this card of Evel Penguinei at the Chinese Arch, China Town, Liverpool.  In 2009 Go Penguin was the finale to Liverpool's Year of the Environment when penguins in various costumes were placed in iconic parts of Liverpool and surrounding areas.  A fun idea which also had a serious message, to highlight the impact we all have on climate change and how a few small changes in the way we live can make a difference to the planet.

Liverpool's Imperial Arch is the largest outside of China. Standing 15 meters (50 feet) tall and spanning the street.  The arch has 200 Dragons and five roofs and was shipped from Shanghai in China piece by piece, the whole arch was put together in time for the annual Chinese New Year celebrations held in this area every year.
Posted by Joy at 21:33 No comments: