First day at school with Kim Il Sung, makes one wonder if the kids think school is like this everyday. There was also another stamp in 1977 to commemorate the 5th anniversary of the country's 11 year education.  By the time they are well into the 11 years (today 12 years) schooling they will be happy to run off and play
North Korea Post went big on stamps for the International Year of the Child issuing four different sets of stamps and many miniature sheets.
More children but this time cute fauns and a male deer pacing outside. The deer on the stamp set are on a farm (very few are left in the wild in Korea) and I think the Bowl of Hygieia symbol (usually connected with pharmacy and medicine) might indicate the Sika deer's horns and antlers are being used in traditional medicine.
It is thought that fewer than 50 of these woodpeckers exist and only in North Korea so those hungry chicks are very important.  The parents will be kept very busy.

Sunday Stamps II prompt of the letter K - for Korea, kids and Kim - See It On A Postcard

A Jaunt in Old Japan

In 1832 Utagowa Hiroshige travelled the  length of Tōkaidō Road (the name translates as the eastern sea route) which ran from Edo (modern day Tokyo) to Kyoto and created a series of woodcuts from 1833-1834 called "The 53 Stations of the Tōkaidō Road" which were published by Hoeido so this first publication became known as the Hoeido Edition of which this stamp illustration is taken
Here is the start of that journey on at Edo's Nihonbashi (Japan Bridge).  The New York Metropolitan Museum of Art own a print of this so helpfully they describe what is happening "...a daimyo procession crosses early in the morning as it begins its long journey out of Edo and towards the open gates of the district.  Ahead are a group of fishmongers who carry fresh fish from the nearby market into the city"
Still on the Tōkaidō Highway but passing Mount Fuji at Hodogaya (the fourth station on the road) portrayed in Hokusai's "36 Views of Mount Fuji".  The British Museum have a print of this (their Japanese galleries are usually a beautiful oasis of calm on the top floor in contrast to the frenetic ground floor galleries).  Their print is rather more sharp than my stamp scan and describes the image 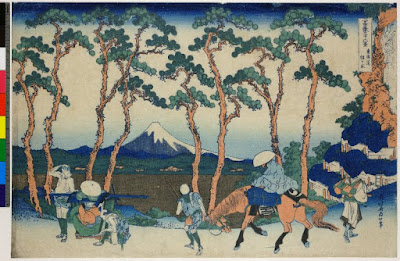 thus - "Travellers on a road lined with pine trees, foot traveller on the far right with itinerant Buddhist monk, deep sedge hat and bamboo flute, gazing at a roadside stone image of a deity carved into the rock-face of hillside (half cropped by the print), palanquin bearers resting to mop brow and re-tie sandal, man leading horse pointing herding stick towards Mt Fuji".  (The British Museum curator goes into more detail)
After all that travelling one might want to send a letter home.  I wonder who will deliver it?  In the 19th Century it might have been Postal Man Otakichi as portrayed by Toyohara Kunichika. 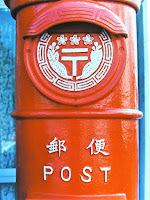 Land of fire and ice with lava fields, mountains and glaciers Iceland provides some spectacular views which I show through stamps.  Helpfully the cancel shows the outline of the country (two thirds of the population live in the south west).  The stamp on the left is Mount Skeggi at Amarfjord the highest peak in the area with views from the peak of the surrounding mountains, glaciers and the capital city Reykjavik. Perhaps after one has climbed up and down this mountain a good place to ease those hard working feet is in the geothermal pool at Narmaskaro.
Now we journey to south east Iceland and the icy tops of  Skaftafell (a hikers paradise) and the impressive glacial river canyon of Joekulságljúfur. The area also has a famous, large and powerful waterfall Dettifoss which is seen in the opening sequence of Ridley Scott's Alien prequel Prometheus.  Sadly I only have two stamps from the set that featured Dettifoss but one is a waterfall that combines beauty and power.
I love this stamp especially the little dot of the horse rider putting the Skógafoss waterfall's 60m drop into perspective.  One can walk right up to the waterfall. or if feeling like some exercise climb up the 527 steps on the fellside to the viewing platform,  There is also a legend of a treasure chest hidden behind the waterfall. See the rainbows and and waterfall pictures here
No views of the natural wonders of Iceland would be complete without a volcano and here is a plume from the vent of the volcano Hekla.  It has erupted more than twenty times between 1104-2000 and this stamp set shows the most famous eruption in the modern era which lasted for 13 months from March 1947 to April 1948. Lava flows from the long fissure active along its entire length which contribute to its elongated shape 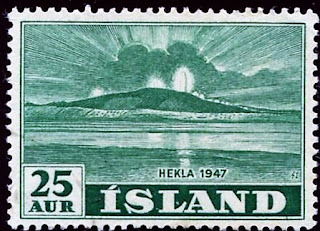 seen here from the sea. No wonder in the middle ages it was thought of as the Gateway to Hell.

Sunday Stamps II prompt this week is the Letter I - for Iceland - See It On A Postcard
Posted by Joy at 14:16 6 comments: 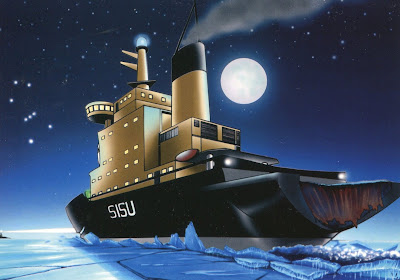 A clear far northern sky with the moon lighting the way as the icebreaker Sisu cracks through the ice in the still of the night. How wonderful this looks. The illustration is by Petri Kantoniemi who draws the Icebreaker Snow series of children's books and there is also an animation series of Icebreaker Snow and his friend Twinkle the pilot boat.

In real life the Sisu sounds just the place to be on ice-breaking duties in the Baltic Sea with its library, gym, two saunas and a swimming pool.  Designed for 54 crew today it is manned by 21 so lots of cabin space to hitch a ride.

Sisu the star of Icebreaker Snow can be seen here
Love a Marine Traffic site?  I do. Here is where Sisu is at the moment.

Maria's Postcards for the Weekend Linky party resumes this week at Connections to the World
Posted by Joy at 19:01 No comments:

A scooter at a traffic light and a little girl chasing a butterfly. Do these stamps say "accidents will happen"?  I think they do, so ring that emergency number 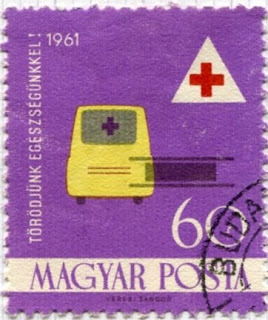 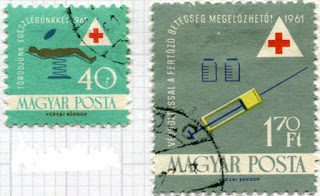 and it could be destination operating table or a big needle with syringe with jars on hand to take blood samples.
Looks like the hospital is busy 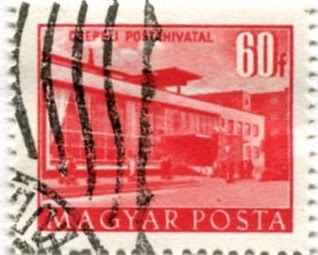 A place to buy stamps to send the 'get well soon card'. This is inner city Budapest and csepel district 1 post office built in 1949-51 is still a post office, hurray. After World War Two Budapest lay in ruins and all its bridges destroyed and so the monumental task of rebuilding is what the stamps celebrate but the Hungarians of course restored the historic buildings as well as building new ones like this.
The Red Cross centenary set featured lots of happy children. The artist is Éva Zombory (1927-1998) who produced lots of beautiful stamps for Hungary and won the "years most beautiful stamp" in 1971.

Lastly as it is World Space Week which always starts on 4th October (the date Sputnik 1 went into orbit)
here is one of space explorations heroes and the first man to walk in space, Alexei Leonov, a mission that nearly cost him his life when his space suit started to leak. Happily at 84 he is still with us today on earth, not only an ex-cosmonaut but artist and writer.


This week's Sunday Stamps II prompt is the Letter H - for Health, Hungary and Hospital - hop over to See It On A Postcard