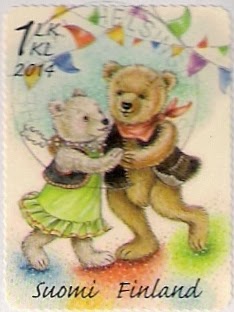 These fluffy teddy bears are this year's Finland Posti's stamps for Valentines Day. I like how in Finland Valentines Day is not only for romance but also friendship.  They say this (one of a set of six) sends a message of friendship and remembrance of others and have called it 'Bear Friends'.  Drawn by the artist Henna Takkinen (b1969) she specialises in bears and indeed has written a masters thesis on them from ancient bear gods to to teddy bears of modern times. This is the first time her art has been designed for stamps and she says


"Teddy bears have taken me on an endless adventure, everything is possible in their world. I want to share through art a teddy bear world of universal peace and love. Through stamps that message of caring and friendship can be shared with the world," 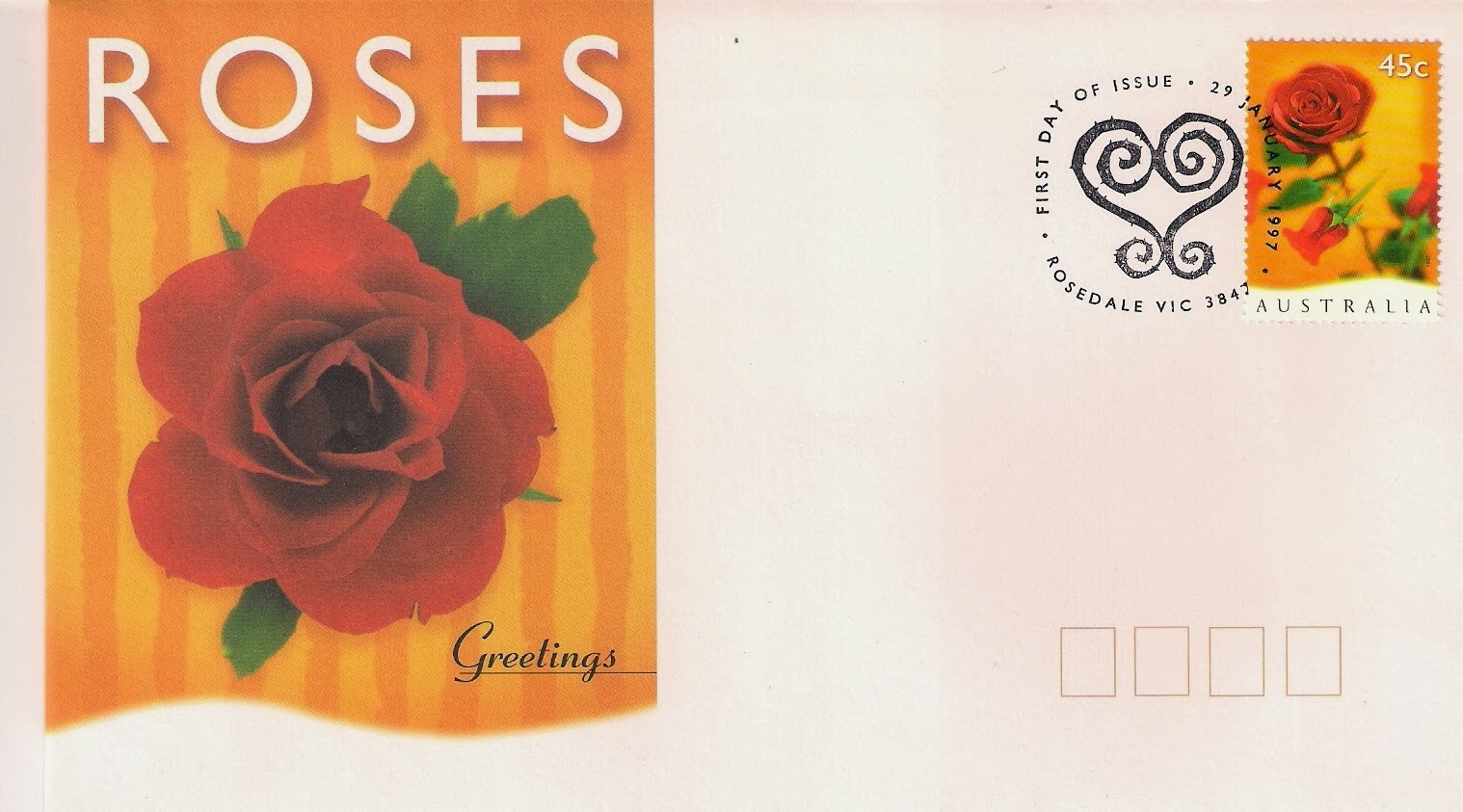 This is the first issue of a continuing Australian series of Greeting stamps and was released in time for Valentines Day.  The stamp was designed by Kate Linton but the cover which repeats the romantic red rose was designed by Melinda Coombes.  Australia Post have used the small settlement (pop 1,077) of Rosedale, Victoria as the cancel which also has a sweet story as this small town was the site of a  station owned by David Parry-Okedon who in the 1840s called his livestock run Rosedale after his wife Rosalie.  In earlier times when the it was just a staging post it lived by the name of Blind Joe's Hut after a Chinese man who was blind in one eye and, you've guessed it,  had a hut on the Lantrobe River. Not quite as romantic for use as a rose themed cover. 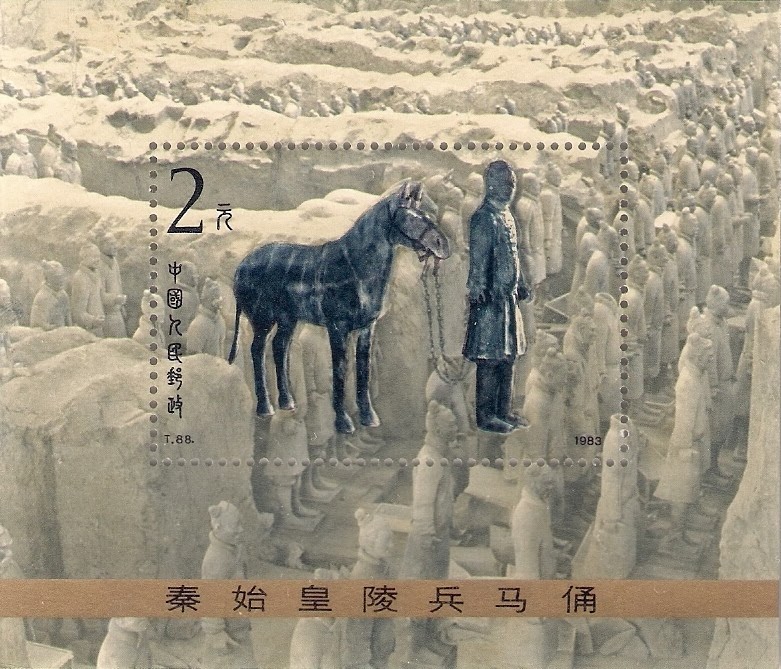 Although I have received some of 2014's Year of the Horse stamps unfortunately none of them are from China so I'm going with  horses appearing on Chinese stamps instead.  Here is a souvenir sheet of one of  China's terracotta warriors leading his horse.

It is from a booklet issued in 1983 called "Terracotta Figures from Qin Shi Huang's Tomb" and this photograph of the tomb is its cover (which actually folds in half). Discovered by accident as some farmers dug for a well in 1974 it is one of the greatest archaeological discoveries of the 20th century.  Qin Shi Huang was the first emperor of all China who ascended the throne aged 13 in about 246BC. He then ordered the construction of his mausoleum which would take 38 years to complete.

Here are the stamps inside the booklet:

The figures are all life size, averaging 5'6"-6'4" (1.73-1.96 m), with the various uniforms and ranks of the army but there are also officials, acrobats, strongmen and musicians.  Originally they would have been brightly painted with many colours but the oxidisation as they were uncovered means that we see them now drab. This deleterious process is the reason why the Emperors Mausoleum has not been excavated.  The groups that have been uncovered so far are referred to as Pit 1 (excavated in 1974) and Pits 2 and 3 (excavated in 1976) 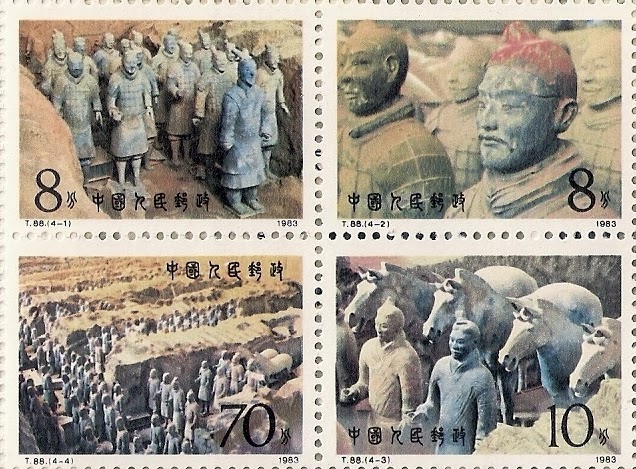 It was assumed that there were generic groups but recent research on the terracotta figures ears has discovered they are each unique people.  Our ears are as individual as fingerprints, no two are the same, which is what the archaeologists found in the figures. There are over 8000 soldiers, horses and weapons and the research and restoration is an ongoing process.  Some of the most stunning restored representations are those of full sized chariots and horses.  One hundred names of the artisans that made the figures have been found. 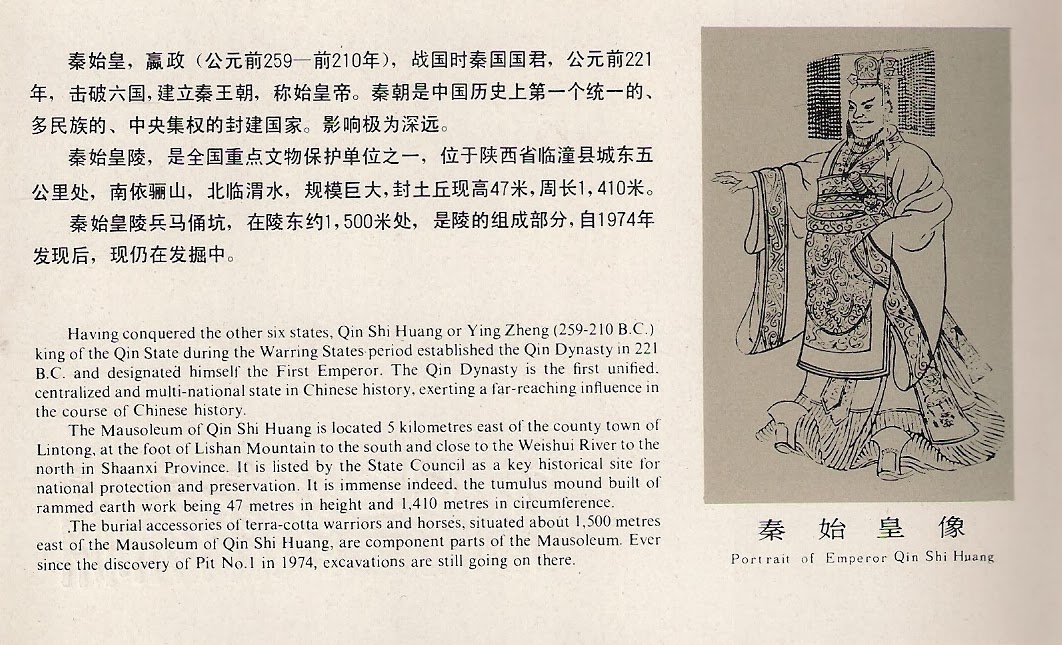 Here is the frontispiece of the booklet and a picture of the Emperor himself.  He envisioned the terracotta army protecting and keeping him company in his afterlife.  An interesting fact is they all face east.  The direction is thought to be because that would face his potential foes with the land of a unified China behind them. 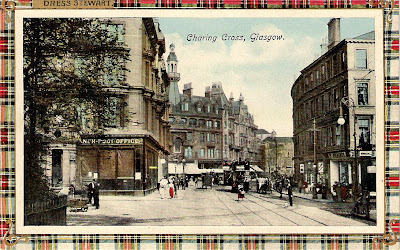 I only have one postcard of Glasgow and remarkably it is totally 'on trend' for Alan's Sepia Saturday prompt.  Crowds, Glasgow and a tram coming down the line. The post office on the corner is still there but the trams, once part of the largest urban system in Europe, went just over fifty years ago. From a maximum of more than 1,200 trams in 1947 the system was gradually wound down, its survival, in comparison with other cities in Britain, was the fact that the trams (and hence spare parts), were designed locally.  Many of these trams still survive today in museums.

The photo looks as like it was taken on a summer's day from the two ladies with parasols on the post office corner and that was the time of my only visit to Glasgow.  Well I say visit, but really it was only a view of the station as I changed trains, running down the platform to get the connection to journey on to the Isle of Arran. A beautiful warm summer fortnight of hills and white sandy beaches, and the occasional company of midges.

I reluctantly turn my mind away from summer back to the present roll upon roll of Atlantic storms sweeping the country.  The storms with a wind behind at high tide them are as fascinating to people now as 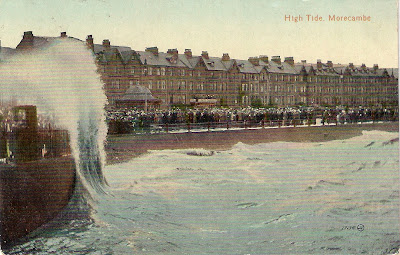 they were in August 1920 when this card was sent from Morecambe, Lancashire.  The crowds look to be well wrapped up against the weather while enjoy the bracing day at the seaside. 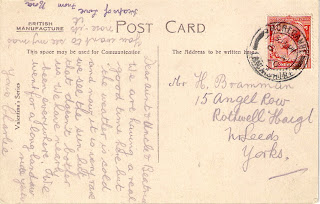 The card says  "Dear Aunt and Uncle and Beatrice, We are having a real good time here but the weather is cold and now it is very rare we see the sun but that doesn't bother us. We have nearly been everywhere. We went for a long landau ride yesterday. Yours Charlie". Then upside down at the top is a cryptic message "You want to see my ma's nose - its it.  Heaps of love from Nora"  Maybe its red with the cold, the 'summer' of 1920 was the coldest of the entire 20th Century.

An entry to Sepia Saturday Number 215 showing the crowds in Jamaica Street, Glasgow. For more crowds join the Sepians here
Posted by Joy at 23:08 10 comments: 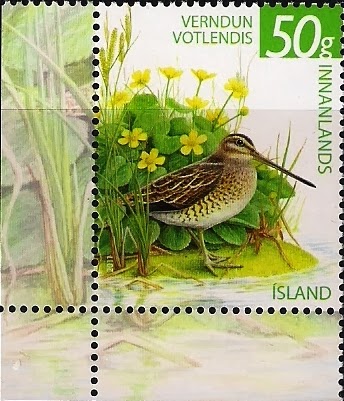 When Vigdis Finnbogadottir, former president of Iceland, was asked by Iceland Post to suggest a theme for the September 2011 issue she chose something near to her heart, wetland conservation. The stamp says 'verndun votlendis' (protection of wetlands) and only  last week on the 2nd February  it was World Wetlands Day.  They are places that have been described as the lungs of the world,  not only fascinating for their birds but also their flora.  The artist shows what I think is a snipe appearing from the reeds and flowers.

Iceland has issued many series on flowers and here are two from 1984:

The following year they were up to series 8 of of the flowers of Iceland.
(If you are interested in other flowers of Iceland I had a postcard of them on here last year, see here).  The Sea Pea is a familiar sight all over the world on the coast because of the ability of its seeds to remain viable while floating in salt water for up to five years, enabling the seeds to drift more or less worldwide.  Lets now drift around the globe to the southern hemisphere and the seaside, but in warmer climes than Iceland, 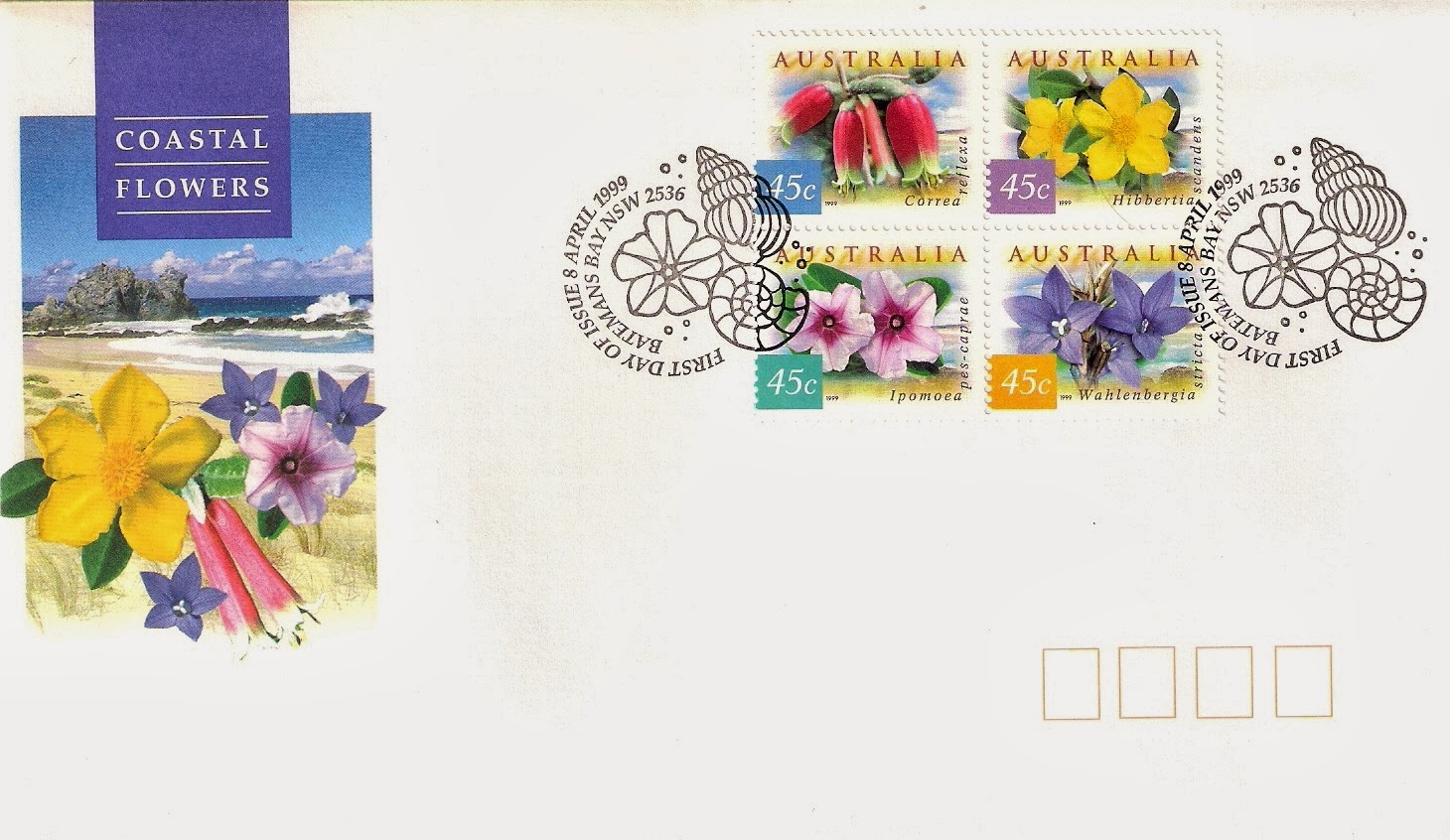 where plants play a vital role in the formation and stability of Australia's sandy coasts. The stamps featured are:

An entry to Viridian Postcard's Sunday Stamps theme of - Flowers 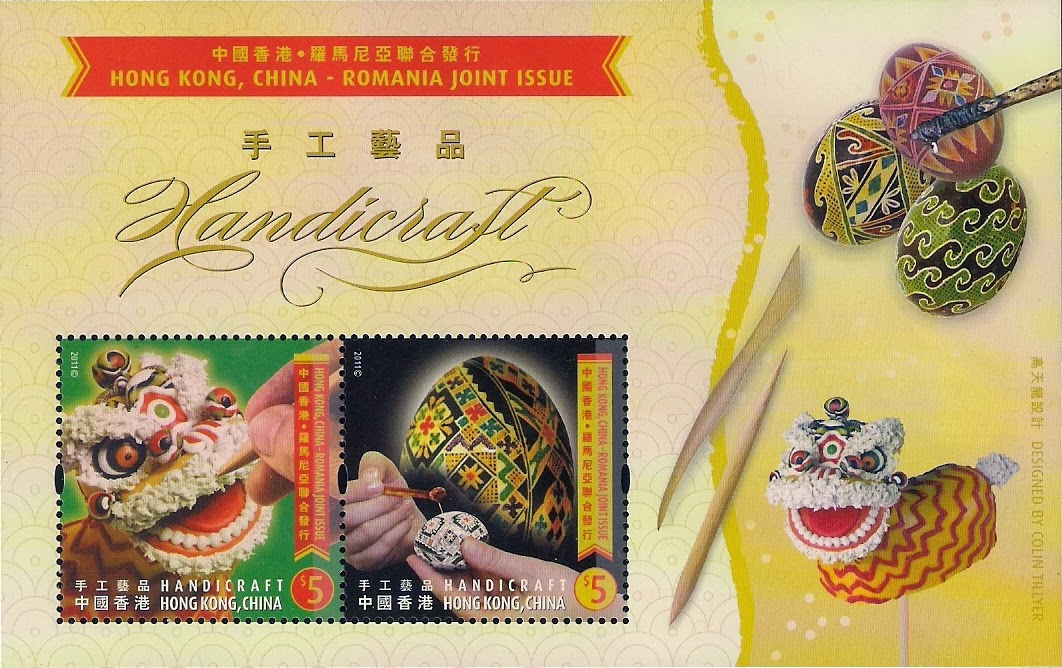 Hong Kong has combined with about a dozen countries so far in producing a joint issue on a different cultural theme.  This year in October they will issue stamps on local food with Malaysia but in 2011 they joined with Romania to celebrate Folk Art.

The lion head is a dough figurine, an art that has been practiced in China it is said for 4000 years. They are usually of legendary figures or mythical beasts.  Every dough maker has their own dough formula with its own characteristics and preservatives but its main ingredient is wheat.  Simple tools are used to add detail to the figurine, small scissors, a comb, bamboo splints and bone needles.  Traditionally Chinese banquets had a table of offerings to the gods composed of flowers and figurines, after the feast the decorations become toys for children or were thrown away.  The lion head symbolises luck and blessings

The painting of eggs in Romania is done with melted wax, the patterns applied with a pencil like tool called a chişiţă.   At Easter on Holy Thursday women and children gather to spend time painting eggs with symbols of spring and rebirth of nature. In times gone by they were considered to have magic power. Each colour or pattern is meant to combat certain forms of evil and the eggs bring good luck to the house.

Year of the Horse 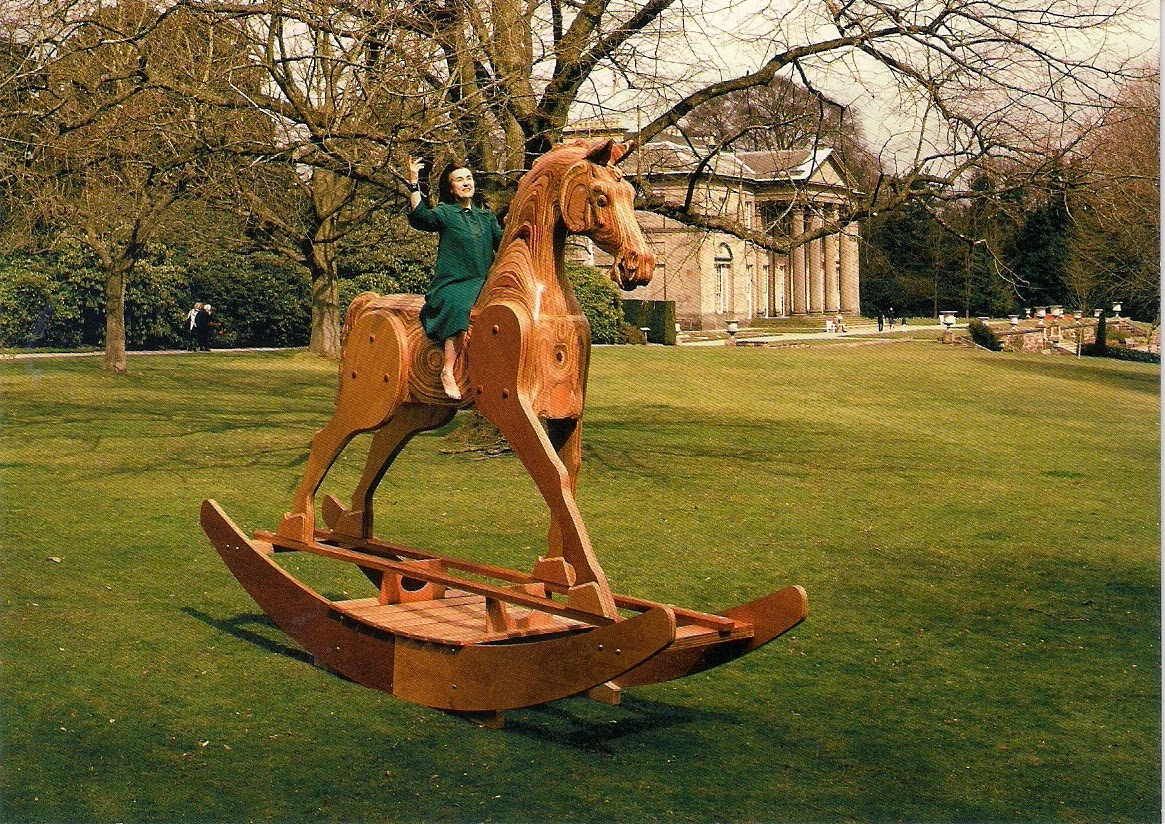 We enter the Year of the Horse, not only that but it is the year of the wooden horse so I knew I had the perfect postcard to show. The giant rocking horse is the concept of the artist Marcia Farquhar and hand made by Anthony Drew at the Rocking Horse Shop in Fangfoss, near York. Marcia says it was a "belated fulfilment of childhood wishes" and is pictured riding it in the grounds of Tatton Park, Cheshire. It was part of the 2010 Tatton Park Biennial on the theme of "Framing Identity" where she discussed equine nature and the role of the horse in the English psyche from the back of this wonderfully grained wooden horse.   Since that year Anthony Drew has created an even bigger rocking horse which is the largest in the world. They are affectionately known as Little Birtie and Big Birtie.   The former has had another outing and always turns heads when being driven down the motorway.

The horse in the Chinese Zodiac is energetic, bright, warm hearted and intelligent.  The year will be full of unexpected adventures and surprising romance. On the downside people take unmoveable positions in negotiations and in the wider world it can be conflict with warfare. 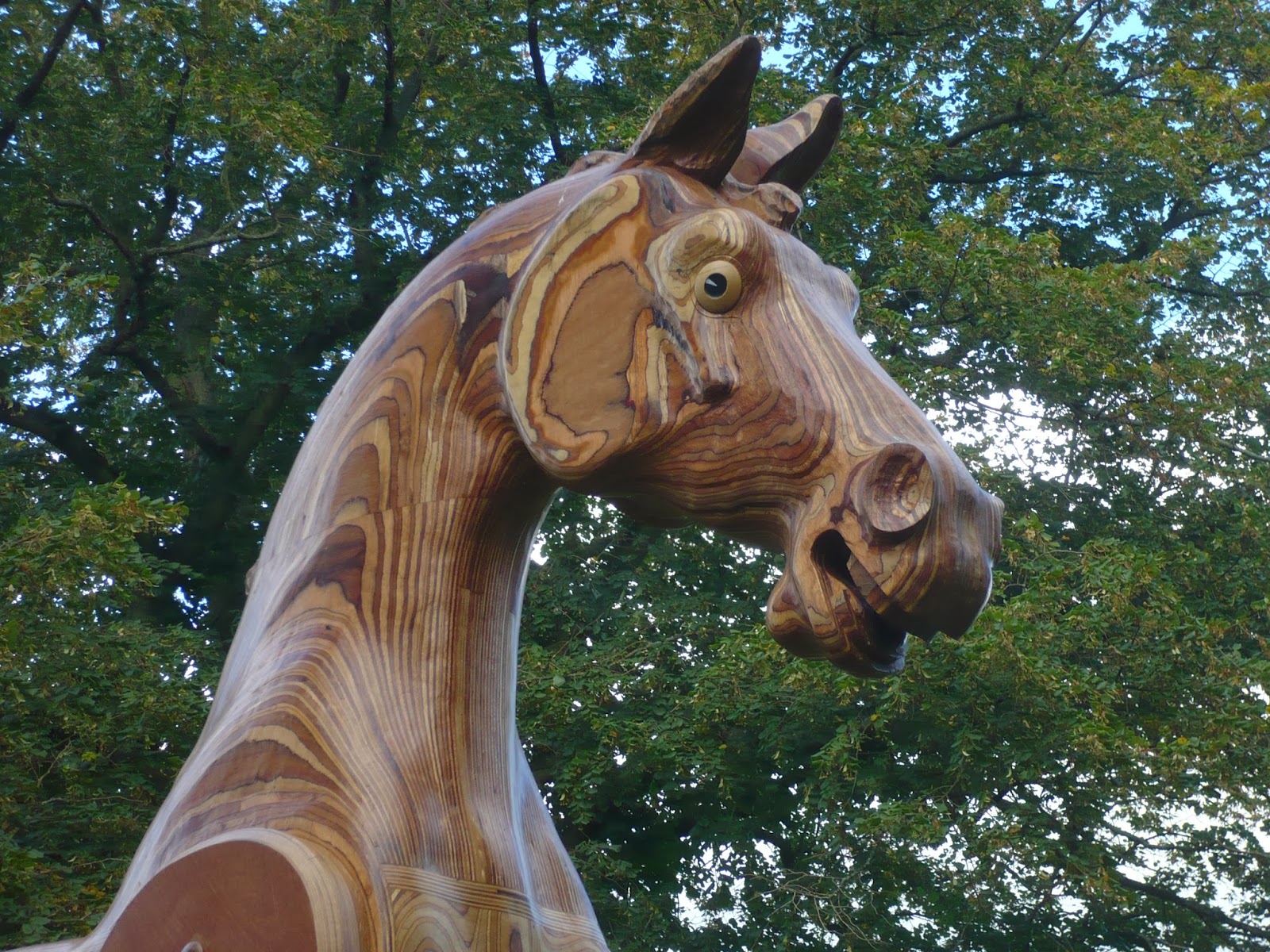 Here is a picture I took at Tatton Park in September 2010 which shows the beautiful grain work and how its expression changes from a different angle.