Into the Blue Yonder with Sigyn 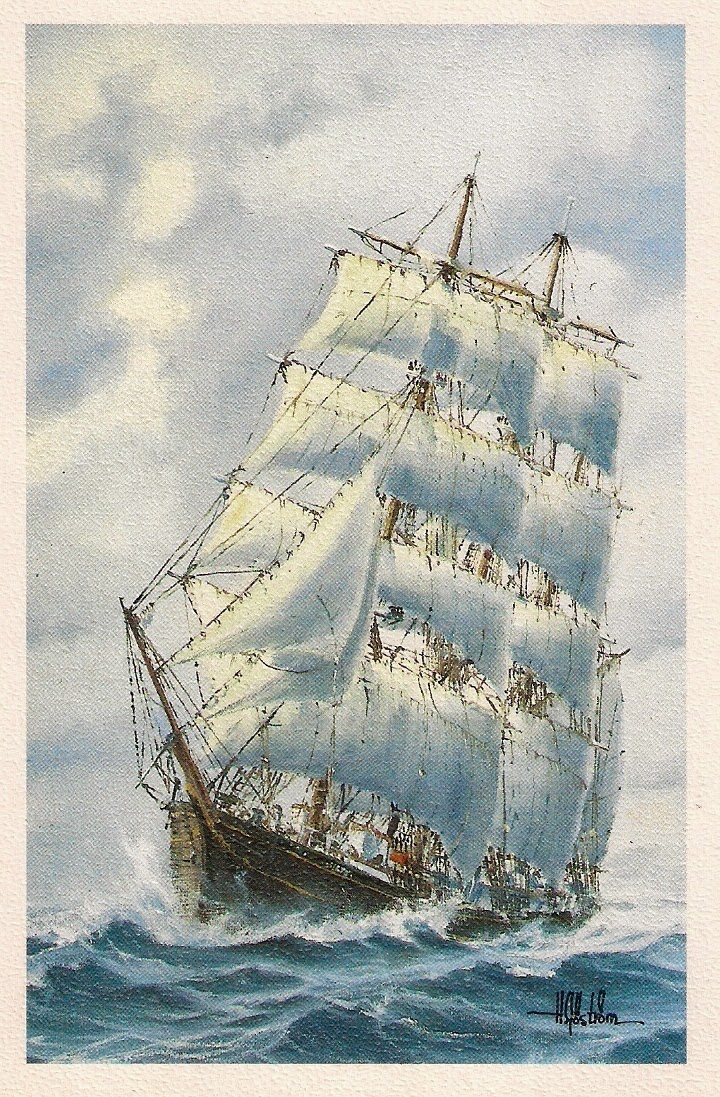 Sometimes a year takes on an unintentional theme and this one for me has been maritime paintings which started earlier this year with a visit to the National Maritime Museum's stunning exhibition "Turner and the Sea" and may have ended with the most recent trip to a smaller but interesting Harris Museum's current exhibition "Making Waves" so contrariwise I'm about to go on holiday nowhere near the sea.

The ship with full sails speeding through the waves is the Sigyn built  in Göteborg (1887) and one of the last sailing barques built for worldwide trade before steam took over (Wikipedia ship history here)  Considered fast and beautiful the Sigyn is now a museum ship moored in Turku on the south west coast of Finland.

The artist is Håkan Sjöström,, born in 1937 many years after this ship first set sail but he would have lots of opportunities to study the Sigyn as he worked at a shipyard in Turku until his retirement and is considered the foremost marine painter in Scandinavia.  He has painted ships from many eras and also produced paintings for Åland Post's six year series on passenger ferries which concluded earlier this year.  Appropriately one of the last stamps included a ship built  by a Turku shipbuilder, the STX-shipyard (FDC here).  Not as romantic as a sailing ship but to arrive by sea is always a wonderful way to arrive in a place or country. 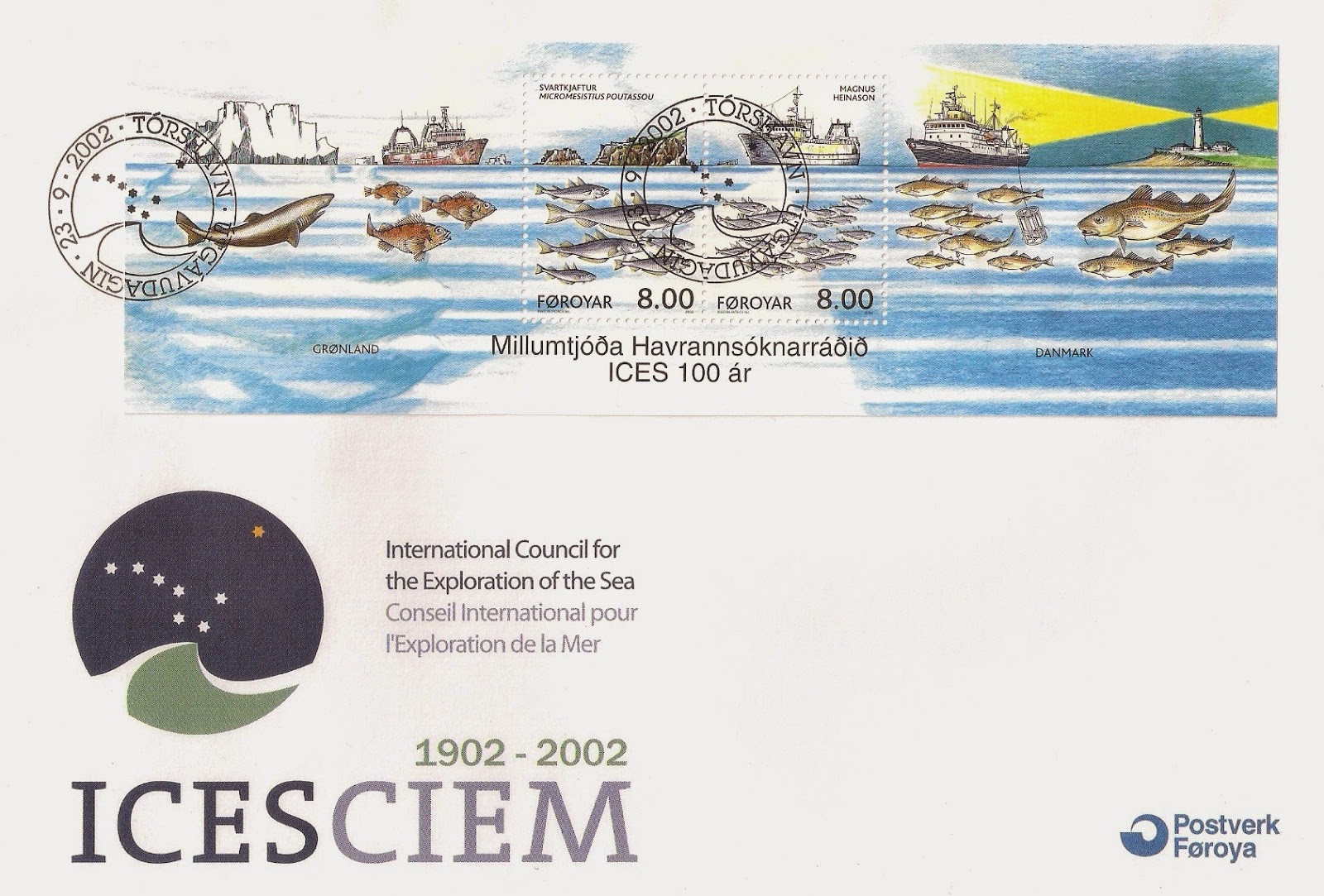 The International Council for the Exploration of the Sea (ICES)  is the world's oldest scientific intergovernmental organisation and its objective is the sustainable use of the oceans and increase of scientific knowledge. Founded in 1902 to study and advise on marine science in the Atlantic, Baltic and North Sea, it now includes the Arctic in its remit. Three countries of the founding members of ICES commemorated its 100 years by jointly issuing the same miniature sheet but each taking two different sections to make the whole scene. 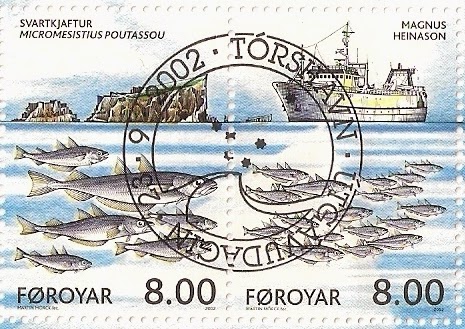 The Faroe Islands two stamps appear in the middle of the miniature sheet.  On the left -  Blue Whiting (a member of the cod family) who swim near the surface at night and migrate to the bottom during the day.  The stamp on the right features Atlantic Cod and a marine research ship named after Magnus Heinason, a 16th Century Faroese naval hero and privateer.  The ship's home port is Torshavn and at the moment it is at sea just to the north of the Faroe Islands.

The Greenland section of the sheet on the left  show a Greenland Shark and Deepwater Redfish.  On the right is where Denmark's two stamps would appear and show Atlantic Cod with the rays of the Hirtshals lighthouse and the marine research ship Dana whose home port is the town of Hirtshals on the Jutland peninsula. Curious to know where it is at the moment?  Looking on the Marine Traffic site it seems to be slap bang in the middle of the North Sea in-between North East England and Denmark.

ICES requests countries to reduce or stop fish catches for certain species based on its research and statistics, whether they do so is another matter.  Spain issued a "Marine Species in Danger of Extinction" in 2013 featuring species on the edge 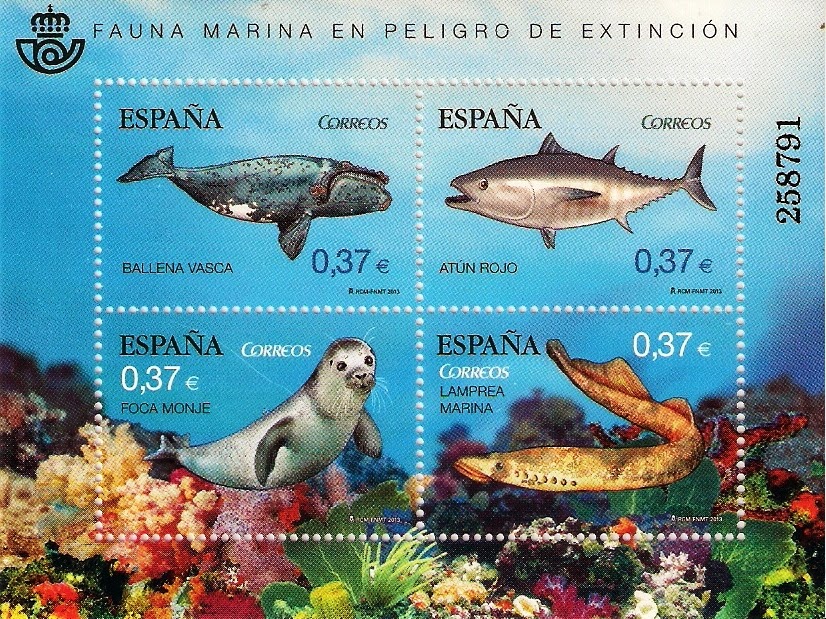 Top left - Basque Whale who live in shallow coastal waters and in the summer move to the colder water of the North Atlantic.
Top right - Bluefin Tuna, native to the Atlantic and Mediterranean and whose numbers have been decimated by overfishing
Bottom left - Monk Seal, lives in the Mediterranean and at great risk of extinction. The world would be a poorer place without the chance of seeing a seal.
Bottom right - Sea Lamprey - an anadromous species like the salmon which spawns in rivers and migrates to the sea.  It did freak me out as a child when I saw a picture of its suction cup mouth and the result of it attaching to skin and rasping away at tissue with its sharp tongue and teeth.  I have since seen one in reality coiling out of a rock but happily there was a sheet of glass between us and it looked rather languid.

the Squid, Lobster and Northern Whelk

Gauguin famously travelled to faraway places but it was the journey to French Polynesia that changed his art.  This scene shows a Tahiti village and its harmony with the natural world and is the point at which his painting started to change, stimulated by the islands exotic culture.  The palm fringed and sandy beaches of the islands of Tahiti are the sort of places I might dream about in the middle of winter and palm trees make an appearance on 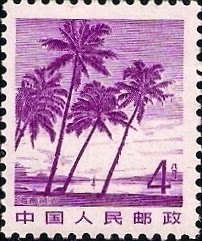 one of the China definitives of the 1980s featuring the scenery of China.  These are the palm trees of Hainan, a tropical island in the South China Sea which has no winter although in January and February the cold winter air from the north comes into contact with the warm sea causing continual fog and creating extreme moisture in the air. The island is a popular tourist destination and one of its big events is the Coconut Festival in late March and early April and for the local Li people March is also the time associated with love when traditionally weddings takes place, 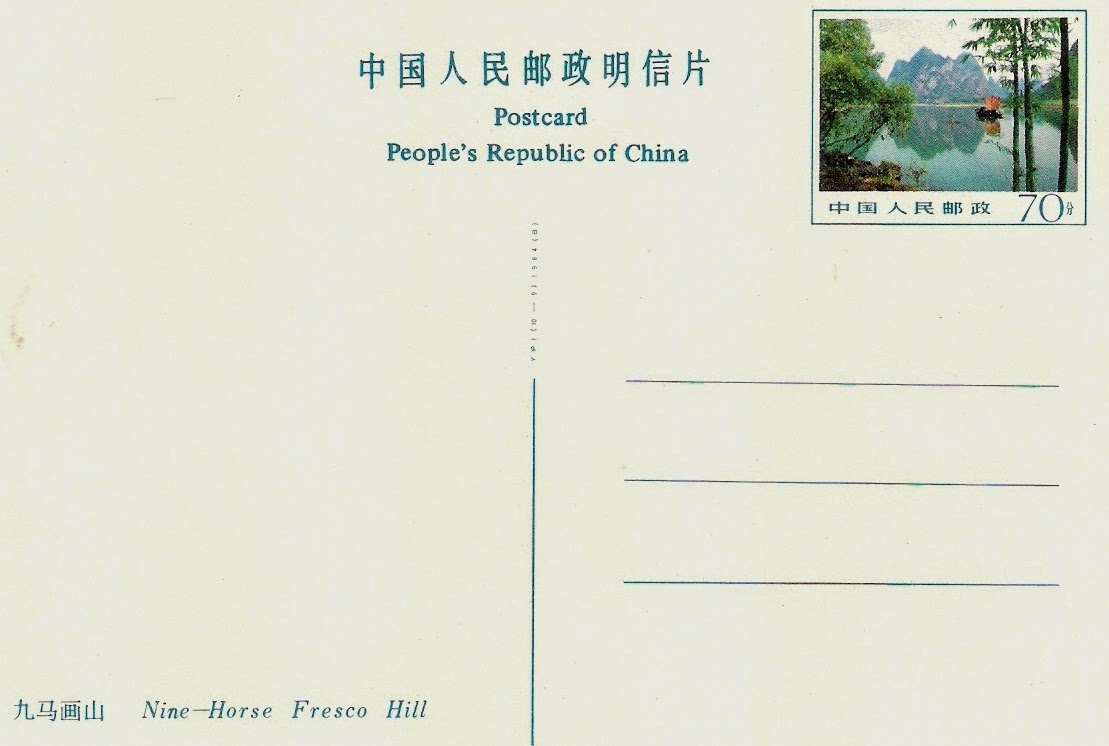 I have shown a couple of my Chinese prepaid postcard of 'Landscapes of Guilin' before and this week's Sunday Stamps theme gives me an excuse to show another one.
Here we are cruising down the Li River and passing by the cliff face of Nine Horse Hill.  How many horses can you count?  The legend is that the Monkey King brought his horses to the Li River and an artist wished to paint them but the horses were spooked and galloped into the cliff face and still can be seen in various poses today.