Quest for a Q

This Qatar stamp shows a scene from the Bayeux tapestry and the Norse influence on boat building can be seen in the Viking type ship both the Normans and English built in the middle ages.
An Arab scribe completes the total number of Qatar stamps I have in my collection, two.  I turn to the natural world for my next Q
and the beautiful and long lived oak, Quercus robur.  1973 was 'National Tree Planting Year' hence the cancel slogan.
Not so beautifully but an interesting piece of history. These stamps were issued by the short lived and unrecognised republic declared in Northern Albania by Marka Gjoni which lasted from the 17 July-20 November 1921 - the stamps were never issued. The currency is the Qint (pronounced chint) which is Albanian for 100. 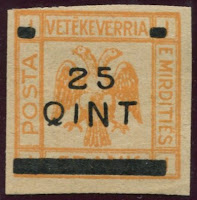 Whoever was wielding the scissors doesn't seem to be in control of them. They also seem to have changed their minds on the currency as this overprint shows. Marka Gjoni's rebellion against the Albania was supported by Belgrade and Greece, but in the end Marka Gjoni was forced to flee to Yugoslavia however he later returned to Mirdita where he lived until his death in 1925.  Of course it is said that the pen is mightier than the sword 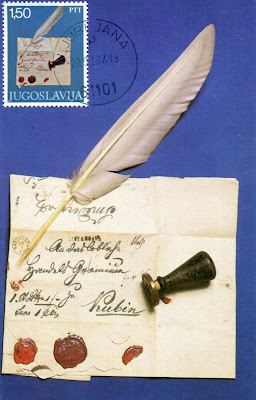 or in this case, the quill.  The Yugoslavia Post Office (PTT - Posta, Telegrafa i Telefona) card and stamp 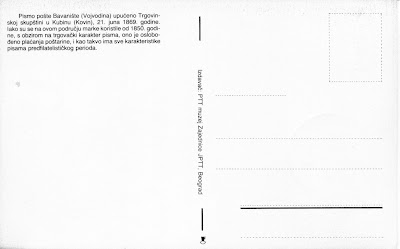 from the PTT museum and library in Belgrade shows a commercial letter posted in Serbia on 21 June 1869 in the "pre-philatelic era". 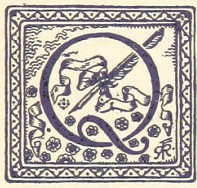 The Sunday Stamps II prompt of the Letter Q - for Qatar, Quercus, Qint and Quill - quickstep over to See It On A Postcard.

We've come to the letter P so it was irresistible for me to feature post.  Lisbon's iconic Belem Tower graces this miniature sheet featuring the Groupil G3 electric van both at rest and in action in what looks a very ergonomic side access for the postie.  The wonderful posthorn and rider symbol on the van reminds me of the days when transport of mail was more difficult
and the stagecoach is a perennial favourite with stamp designers for which must be an irresistible combination of horses, people, ornate carriages and speed.
This 18th Century Stagecoach is from a painting by Jozef Brodowski and I am not sure if this is the elder Brodowski or younger, I suspect the latter because of the horses that appear in his paintings. I wonder where the carriage is heading?  Perhaps it is Poznan
where you can see the stagecoach entering stage left as it powers over the bridge towards the cathedral's bell towers in an age when they could never have dreamed of something like airmail.
The first civilian test flight to the Azores was a Boeing sea plane in the 1930s which was 'only' carrying mail but this is a propeller driven Lockheed Constellation from the 1950s at the newly opened Santa Maria Airport.
So stick on your stamps
and these guys will take and deliver.  The illustrator Maciej Jędrysik's webpage shows this stamp as part of the integrated set and a FDC of a tightrope walking postie here (page down half way). His front page with other illustrations is here. 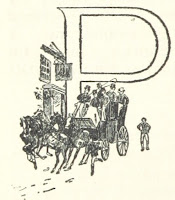 Sunday Stamps II is at the letter P - for Poland, Portugal, Post, Poznan, Plane, Propeller and Postage Stamp gallop over to See It On A Postcard for more things starting with the Letter P.
.

The French territory of Oubangui and Chari took its name from the two rivers, one of which the Military Postal Service extended along from 1893 onward and then headed northwards during the 1900s. This stamp however is for civilian mail which for some time used overprinted Middle Congo stamps.  The area would become the Central African Republic in 1960.  From the heart of Africa I travel to the blue waters of the Pacific Ocean and another French overseas territory,
the Oceanic Settlements, a scattering of  some 118 islands which were later named French Polynesia. I don't have any other French Polynesia stamps but do have some featuring the great explorer of Oceania, Captain Cook

his bi-centenary celebrated here by Niue although in June 1774 the locals were not keen on him landing and despite three attempt he had to return to his ship, in retaliation naming it Savage Island. 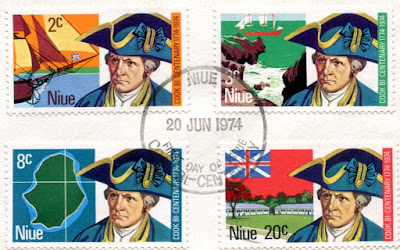 So we have top - 2c The bow of Captain Cook's ship with Niue in the background, 3c Niue landing place.  Bottom 8c Map of Niue, 20c The present Niue Administration building against the ensign of 1774

Later a Polynesian group of islands was named after him.  I wonder if he saw these birds?
The Cook Island's endemic and today endangered birds the lilac crowned fruit dove (Ptilinopus rarotongensis). Leaving Polynesia I now set sail to Melanesia and
Papua New Guinea, a country famous for its Rugby League players whose national team are known as the Kumuls (birds of paradise) and are at the moment in Australia and playing in the World Cup
but the other code of Rugby is played in Fiji which featured Rugby Union on its Diamond Jubilee stamps. 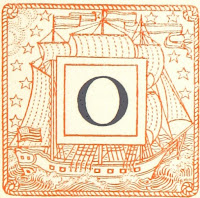 Sunday Stamps II prompt of the letter O -  for Oubangui and Chari, Oceania and Oval Ball - navigate over to See It On A Postcard
Posted by Joy at 11:58 5 comments:

I've never seen the Northern Lights so this stamp and card are the next best thing until I do.
I imagine Polar Bears see the northern lights all the time.  I don't know where in Norway this photograph was taken but one of the places that fascinate me, the Svalbard Islands, lie halfway between Norway and the North Pole is considered one of the best places to go and see them, by boat.
A magnificent pair of antlers displayed by a Caribou. It is also an appropriate stamp as we approach Armistice Day on the 11th for this 'Trail of the Caribou' issue refers to the contribution of the Royal Newfoundland Regiment ground forces during World War 1 (the Carabou is the emblem on the regiment's badge).  Each one is inscribed with a different military action in which the regiment took part, in this case Suvla Bay, Turkey, part of the disastrous Gallipoli campaign 1915-16.  The major troop landing at Suvla Bay was relatively successful but Allied indecision stalled their progress and advantage was lost.  The storming of the beaches of Gallipoli is for ever associated with New Zealand and Australia who each year mark the anniversary as ANZAC Day on 25th April.
Travelling to New Zealand here is their unique native bird.  The kiwi is not the only flightless bird on New Zealand in fact there are 16 species which includes
the world's only flightless and nocturnal parrot, the Kakopo.  The Blue Duck can definitely fly but is reluctant to do so and lives by fast flowing mountain streams, nesting in hollow logs and caves.   The designer of the Native Birds stamps is Janet Marshall who writes she has been painting New Zealand birds and flowers since 1970

Luckily for the ground dwelling birds there are no fast running cheetah in New Zealand
like this pair scanning the horizon in Yankari Game Reserve, Nigeria's largest National Park 866 sq miles (2,244 sq k) in North East Nigeria.  This was the first definitive set issued after Nigeria switched from Sterling to the new currency of Naira and Kobo.

Lastly I return to New Zealand for some inanimate objects
and the minerals found there which featured on the 1982 definitives. Here are some I might like to wear, the first nephrite, one of the two minerals commonly called jade although nephrite can be found in other colours apart from green and amethyst which comes in a range of variable intensity. 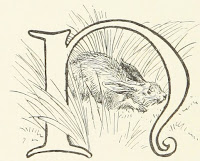 Sunday Stamps II prompt this week is the letter N - for Norway, Newfoundland New Zealand, Nigeria, Northern Lights, Nephrite, Native Birds and Animals and National Park - nip over to See It On A Postcard.