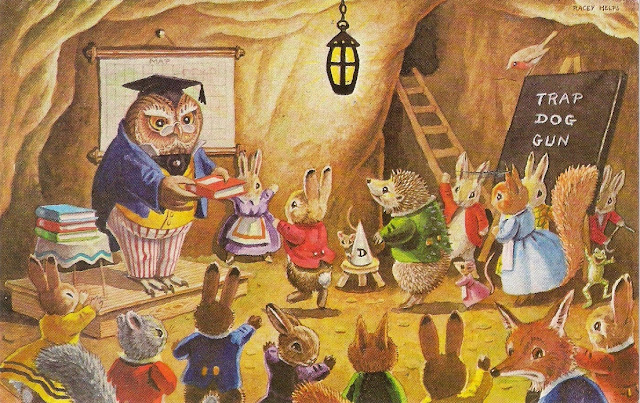 I laughed when I read the list on the blackboard of this card. Three things definitely to be avoided by any young rabbit, this one has learnt well and deserves a prize.  I don't know how the fox has sneaked in, he is looking rather shifty. This drawing has so much detail, I could, and have, look at it for a long time. How wonderful it must have been for Racey Helps daughter when she was evacuated during the war and he sent her hand made books of  drawings with their story. He went on to write many illustrated children's books but unfortunately died in his 50s but these wonderful drawings live on.

Denise, as she usually does, attached a nice variety of stamps

A 2010 permanent stamp of the queen waving on a recent visit to Canada. What I missed at first was the nice design touch in the background, a close up of a blue sedum flower.  Next in contrast the August 2011 commemorative stamp of the 50 year anniversary of the hydroplane Miss Supertest III as it won the Harmsworth Cup.  The races were started in 1902 to develop motor launch racing and from that time until 1956 the US always won the cup. Enter Bob Hayward, a chicken farmer from Embro, Ontario whose winning of the cup broke that run and brought the cup to Canada. The boat became the only one to win the cup three times in a row.

Lastly a journey off the planet 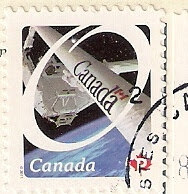 One of the 2011 definitives called 'Canadian Pride' featuring all the place you might see the iconic maple leaf of Canada. The stylised O surrounding the symbol stands for O in  "O Canada!' first line of the national anthem.  The designers who came up with this neat idea are Lionel Gadoury and Terry Popik of Context Creative. I wondered where in space we were with this photo and the Collect Space forum gave me the answer. It was the space shuttle's remote manipulator, the Canadarm.
Posted by Joy at 17:01