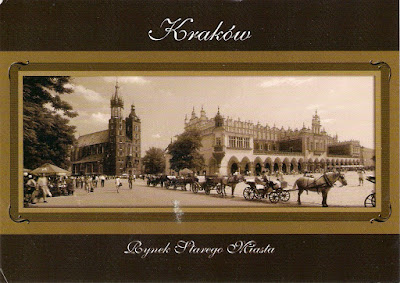 Main Market Square, Kraków
Kraków is one of the oldest cities in Poland and from 1038-1596 was the capital. The scene shows the carriages waiting in the Market Square for passengers, it is a popular tourist destination.  The centre of Kraków has been designated a world heritage site by UNESCO. The beautiful renaissance building on the postcard is the Cloth Hall (Sukiennice) which is, and was, a centre of trade. Nowadays apart from shops it also houses galleries of 19th century Polish art.  On the left is St Mary's Basilica, a brick built Gothic church rebuilt in the 14th Century. Every hour a trumpet signal is played from the taller tower. This commemorates the 13th Century trumpeter shot in the throat while sounding an alarm before the Mongol Golden Horde attacked the city. The midday trumpet is played on Polish radio every day.

My sender, Mateusz, ambition is to study at the university of Science and Technology here, he was visiting Kraków when he bought this card, and is studying hard.  The university is a nice link to the card's stamp 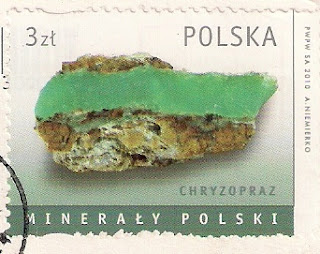 Graphic Designer:- Anna Niemierko
one of the 2010 'Minerals' set. What a beautiful colour. This is chrysoprase, a word from the Greek, chrysos (gold) and prasinos (greenish).  The largest deposit of this mineral in Europe is in Lower Silesia, Poland, it is also possibly the largest amount in the world. The green in chrysoprase varies from apple to dark green depending on the amount of nickel in the rock. I think it would make very pretty jewellery.


Thank you Mateusz, good luck with the exams.
Posted by Joy at 22:01