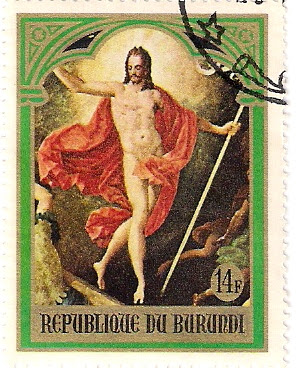 "Resurrection"
I didn't think I would have anything for this weeks Sunday Stamps on the theme of Easter or religion so I went off to find something symbolic like rabbits or eggs, but after a root through an old box of stamps discovered this stamp, issued by Burundi in Easter 1969.  The other bonus was I discovered an artist I had never heard of, Antoine Caron (1521-1599), not many of this French artist's works survive. He was a painter at the French court and the description of this says so much in a single sentence -


"his work reflects the refined, though highly unstable atmosphere at the court of the House of Valois during the French Wars of Religion 1560-1598".
As can be seen Caron elongated his figures, I wonder if that was the reason he was chosen, for one of the other stamps in the set  is of an El Greco painting. Of course once I'd seen the detail of a floating and dancing Christ I had to see if I could find the context of the Caron painting which changes the view of the image entirely.

The painting can be seen in the Musée départmental de l'Oise in Beauvais, located in the centre of the city by the cathedral, it looks a fascinating place.

The image on the stamp certainly looks different when it is out of context. I'm glad you showed the whole painting.

That is one quite interesting stamp. I love it!

great stamp to have and I am learning from your post---great to see the original painting, thanks for sharing! btw, just followed you and wishing you a great Sunday! -Postcrossing Mom

The story behind the stamp is very interesting. I learn more every week.

Interesting, but that's a loaded word...:)
Caron's choice of painting elements is debatable...
He had Jesus floating, instead of walking.
Quite naked, instead of dressed.
Caron decided that the wind should conveniently blow a certain way, and that the light and shadow on Christ's thighs should give certain (elongated) impressions...
Carrying a long stick, instead of simply talking softly in the scene, presumably.
The stamp and the painting are artistic enough, but the painter's message and vision are...strange (did I say unstable?).
:)

Congratulations on having managed to find an Easter stamp! And it's a beautiful one.