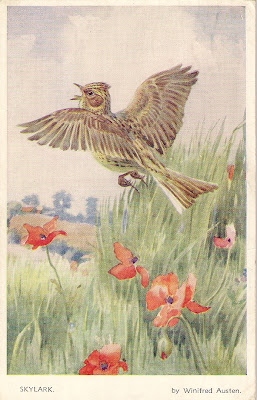 One of Valentine postcards' Birds Series. Winifred Austen (1876-1964) captures the skylark as it rises and trills its liquid song into the air (which they are doing in a carefree manner at the moment, no eggs to guard yet).  Austen, a painter, etcher and engraver of birds and animals was born in Kent.  She lived from 1926  on the Suffolk coast and the scene she shows could have come from either of those counties rolling countryside. 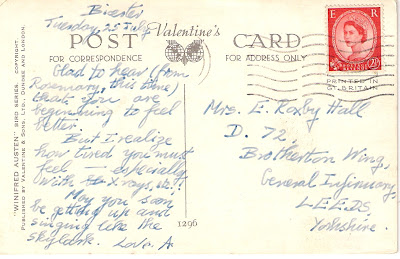 The card was posted in the late 1950s early 60s from one friend to another lying in Leeds Hospital. The last paragraph says "May you soon be getting up and singing like the skylark".  The song is a very evocative one and the skylark has fascinated many poets, which is why I used Shelly's first line in my heading. The musician David Hindley studied the song of the skylark and from a 48 second recording he wrote down 13 minutes of sheet music  and came to the conclusion that the structure of notes was not unlike Beethoven. Vaughan Williams was inspired to write "The Lark Ascending", which does not have the number of notes of the Skylark, but then we only have human ears, however what beautiful notes Vaughan Williams created. Here is the last part played by Hugh Bean

A very lovely card! As soon as I saw the skylark I thought of the Vaughan Williams piece. It was one of my mother's favourites.

The "ascending" reminds me of the gull I saw flying around my neighborhood today.

An absolutely beautiful card - the colors are so soft and lovely.

This is a lovely postcard. I like looking at it. So very pretty.

How very very beautiful. What an artist she was!

I love that you included the back of the card ... what a beautiful sentiment for a friend in the hospital to get well and sing like a skylark.