Cruising on the Kiel Canal 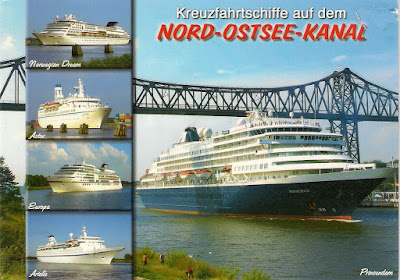 Cruise ships on the Nord-Ostsee-Kanal, or the Kiel Canal, 61 miles that connects the North Sea to the Baltic Sea, cutting out the journey round the Jutland peninsula.  It is said to be the busiest artificial waterway in the world.  In 2010 there were an average of 87 ships a day (a number which excludes small and pleasure boats),  using this route. Because of the numbers there are special traffic rules for large ships using the canal, however most large cruise ships cannot pass under the bridges so cannot use it. As can be seen the ones on this card are small enough, although there does not seem to be a lot of room to spare on the main picture of the Holland-America Line ship Prinsendam.  The ship top left, the MS Norwegian Dream, has special funnels and masts that can be lowered for passage.  The stacked decks of the large modern cruise liner are not very attractive but the smaller ones like Arielle and Astor here have more classic and graceful lines.

My sender likes to travel and is looking forward to June when she will go on a cruise, not through the Kiel Canal, but to Iceland and Svalbard seeing some amazing landscapes.  The card came with 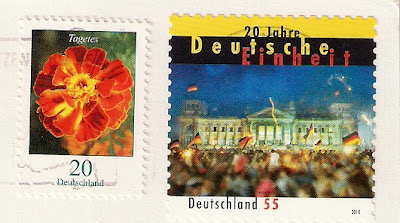 one of the pretty flower definitives and the 2010 stamp commemorating 20 years of German unification with the crowds waving flags in front of what I think may be the German parliament.  Every year since the fall of the Berlin wall and the unification of west and east Germany the 3rd October is a national holiday and a specific place is designated for the main celebration. This year it will be Bonn.